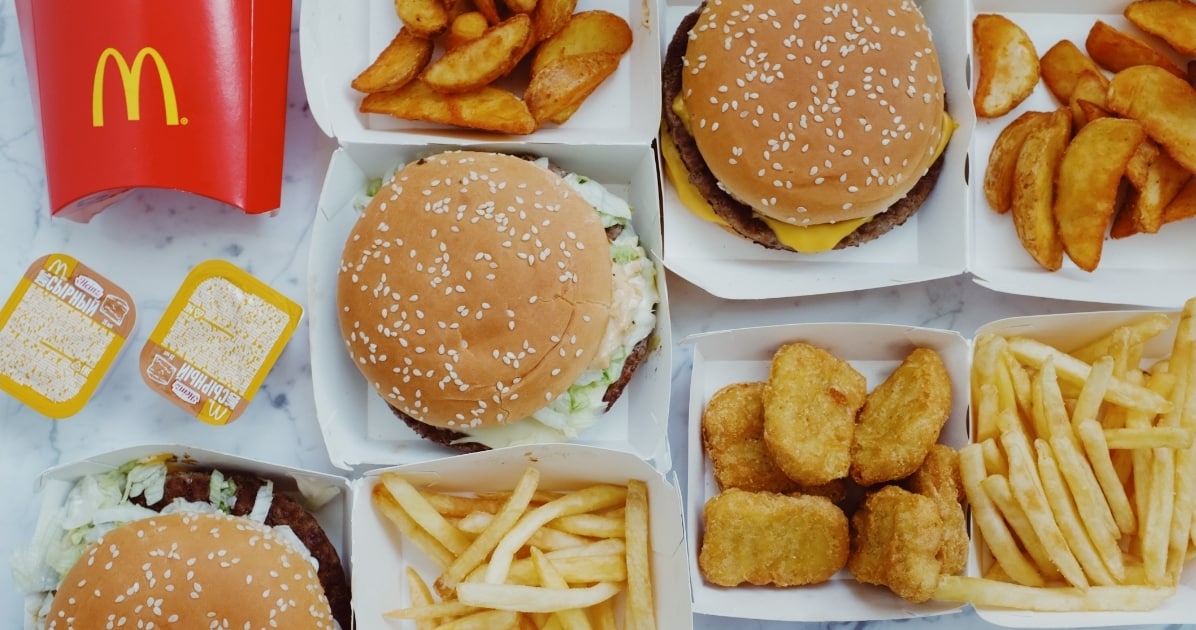 McDonald’s announced in June that it will be opening 50 new restaurants and hiring 20,000 new staff in a major expansion across the UK and Ireland. Media outlets reported the news in their business sections, focusing on the employment opportunities and how the company would introduce “more flexible” restaurant layouts to better serve customers whose habits and preferences have been changed by the pandemic.

But what does the growth of one of the UK’s (and the world’s) biggest vendors of beef burgers mean for animals and the environment, and how does it square with new recommendations to make the UK’s food system fit for the future?

McDonald’s already has around 1,300 restaurants in the UK, serving three million beef patties to 3.5 million customers daily, and meat made from around 30 million chickens a year—though this figure, from 2010, is now likely higher. Globally, there are 39,000 McDonald’s restaurants, 1000 of which opened in 2020. Around 50 million burgers are reportedly sold a day across all these locations. Beef typically generates 60 kilograms of greenhouse gas (GHG) emissions per kilogram of meat produced—the most of any food product—and, along with lamb and mutton, requires 100 times more land to produce than plant-based foods.

Chicken is usually thought to be less emissions-intensive, but the rocketing number of chickens being farmed has hugely increased their impact on the environment, with great swathes of South American rainforest cut down to produce soy for chicken feed.

“Meat production is a leading driver of climate change and biodiversity loss,” says Jennifer Molidor, senior food campaigner at the Center for Biological Diversity. “Expanding corporate reach, without making meaningful strides towards menu changes, is just a way for McDonald’s to pass the buck on climate change and cloak it in ‘job creation.’”

Making changes to its menu is exactly what activists have lately been demanding of McDonald’s. Animal Rebellion, an offshoot of Extinction Rebellion, has recently been engaging in a wave of actions against the fast food chain to demand it transition to a just, sustainable plant-based menu by 2025. Activists have staged weekly ‘McSit-Ins’ at McDonald’s restaurants, blockaded its distribution centers, and, most recently, blockaded the factory that produces its three million daily burger patties for several days, preventing products from leaving the facility. Activists say that McDonald’s is a prominent symbol of the system they really want to change—the entire animal agriculture industry.

Molidor thinks activists are warranted in targeting companies like McDonald’s with a big environmental footprint. “People should stand up to companies that insist on destroying their communities and the planet,” she says. “Companies like McDonald’s have a responsibility to their customers, who are increasingly demanding plant-based options, and their shareholders, who should be concerned about the risks presented by the climate crisis.”

McDonald’s rolled out its ‘McPlant’ plant-based options in the UK this year, following belatedly in the footsteps of other fast food outlets such as Burger King and KFC. There is now a plant-based burger, wrap, and ‘dippers’ available on its menu. Different plant-based options are available in other countries; a McPlant burger, developed with Beyond Meat, is now available in the U.S. and Canada. Whether these plant-based items will prove popular remains to be seen; McDonald’s recently dropped the McVeggie burger from its menu in Australia less than two years after it was introduced due to lack of demand.

Aside from adding a few meat-free options, McDonald’s has shown in other ways that it is not oblivious to its impact on the climate, environment, or the animals whose meat it serves to its customers. In 2018, it announced it was setting “Science Based Targets” to cut its GHG emissions from its restaurants and offices by 36 percent by 2030 from a 2015 base year, to reduce emissions intensity (per metric ton of food and packaging) across its supply chain by 31 percent by 2030 from 2015 levels. The company predicted that this would save 150 million metric tons of emissions—the equivalent of removing 32 million cars from the roads for a year.

As with all climate pledges, this one deserves scrutiny (see this article from the Counter for an in-depth analysis). By reducing only the emissions intensity of its food supply chain, instead of its absolute emissions, McDonald’s could still increase its overall emissions if it keeps increasing the amount of beef it buys and sells. And that is clearly what it intends to do given its planned growth in the UK and globally. How they plan to reduce these relative emissions is another point of concern.

McDonald’s claims to be making its beef sustainable by “supporting the development of national multi-stakeholder beef sustainability programs. These programs emphasize practices that align with the global definition of beef sustainability outlined by the Global Roundtable for Sustainable Beef (GRSB) Principles and Criteria…” McDonald’s helped to establish the GRSB in 2011 in order to define sustainability in the beef supply chain. The bulk of the GRSB’s members are from the meat industry, including industry associations and meat processors such as Cargill and JBS, but draws its environmental credibility from founding partner World Wildlife Fund (WWF)—which has been accused multiple times of helping destructive corporations to greenwash their activities.

How do the GRSB principles and criteria improve McDonald’s environmental and climate impact? It’s difficult to tell, as whether or not they have met the criteria “that need to be met in order to adhere to a principle” is determined by the members of the GRSB. What does it mean, for example, for soil health to be “maintained or improved through implementation of appropriate management practices”? What are appropriate management practices and who determines them? Holistic grazing is clearly a big part of the agenda, as the Savory Institute, which promotes this type of livestock management, is also a member.

The research on holistic grazing suggests its capacity to store carbon in the soil is modest and time-limited, and it can significantly increase the amount of land used to raise cattle, often to the detriment of wildlife. By contrast, there is clearer evidence that significantly cutting beef production is needed to reduce GHG emissions and free up land for nature restoration.

Molidor, who has written about the problems of viewing cattle as a climate solution, is unconvinced that McDonald’s can really succeed in becoming more sustainable while continuing with its current food offerings, particularly as it is expanding. “At the scale that McDonald’s produces burgers, even the best practices cause enormous harm to the environment,” she says.

In focusing on the sustainability of its beef, McDonald’s seems to have overlooked the sustainability of its chicken products. Poultry News reported in 2017 that McDonald’s chicken sales outstrip its beef sales in the UK. McDonald’s sources the chicken for its British restaurants from several countries, including the UK, the Netherlands, France, Thailand, and Brazil. The UK alone imports 3.1 million tonnes of soy per year, the majority from South America, with the Poultry Site estimating that 60 percent is fed to farmed chickens. Last year, a joint investigation by the Guardian, the Bureau of Investigative Journalism, ITV, and Greenpeace Unearthed found that retailers including McDonald’s source chickens from UK producers fed on soy linked to thousands of forest fires and logging in the Brazilian Cerrado.

In terms of the animals farmed to provide McDonald’s with its supply of meat, the company’s welfare commitments lag behind other fast food chains, according to a new report by World Animal Protection. Notably, it has not signed up for the Better Chicken Commitment. In August 2020 campaign group Animal Equality released an investigation into eight British chicken farms owned by major chicken producer Moy Park, one of McDonald’s suppliers, that showed chickens were suffering from injuries and sores from fast growth and unsanitary conditions, deprived of water, and dying by having their necks crushed by workers.

For cattle, the GRSB principles and criteria again set the welfare standards, which are vague and lacking any indication of how McDonald’s monitors or enforces them. The company states that its UK and Ireland restaurants source all their beef and pork from British and Irish farms, but doesn’t explain how it could source such huge and increasing volumes of meat without relying on industrial cattle feedlots, of which there are now around a dozen in the UK, or intensive pig farms, of which there are now at least 259.

McDonald’s UK expansion is happening right at a moment when it is most at odds with the future course Britain needs to set for itself.

Right now, a spotlight is shining brightly on the climate leadership of the UK. In April, the government set in law the world’s most ambitious national climate target, vowing to cut emissions by 78 percent by 2035. The UK is also the host of the UN Climate Conference, COP26, in November. The recently published government-commissioned National Food Strategy lays out what this all means when it comes to food policy, calling for a 30 percent reduction in meat by 2030, as well as big cuts to the amount of junk food consumed by British people for the sake of public health.

“All businesses—from retailers to restaurant chains—will have a role to play in helping us to achieve (and ultimately go beyond) these targets,” says Percival. “If McDonald’s is expanding, we can only hope they increase their provision of healthy plant-based options. At the moment there isn’t a single vegetable offered on the children’s menu.”

The government is certainly not giving businesses any nudges. In its 2021 progress report to parliament, the government’s advisory Committee on Climate Change (CCC) warned that the government has failed to implement policies to meet the CCC’s more modest recommendation of a 20 percent reduction in meat consumption by 2030.

Even so, Molidor, like Animal Rebellion, thinks that a huge company like McDonald’s could make a difference if it would take the initiative. “McDonald’s should step up to be a leader in this industry by making real commitments to better menus,” she says. “It could make creative and effective marketing efforts to support such changes. Less beef, more plants, smaller meat portions, and alternative milks for milkshakes are some easy steps that provide menu choices and lighten the company’s impact. Without making a bold effort long-term, this company’s wimpy climate efforts compared to competitors may leave customers deciding its menus belong back in the stone age.”

McDonalds Celebrates 50 Years of Big Mac: Estimated 11 Million Animals Have Been Slaughtered for the Sandwich