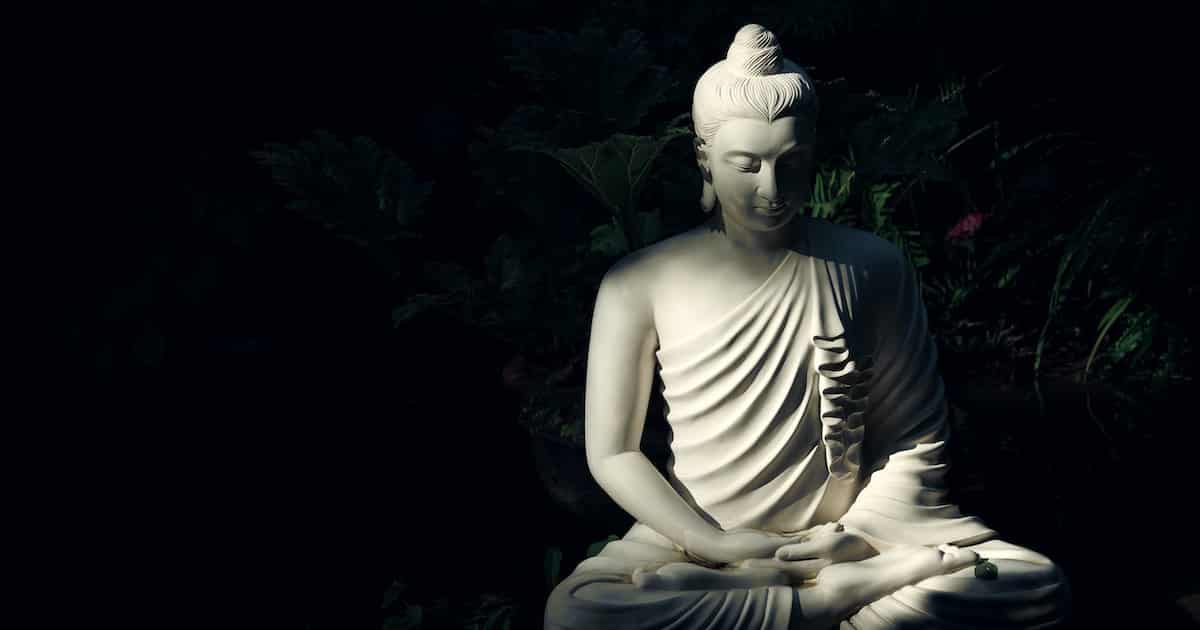 Buddhism focuses on doing no harm and living honestly. Toward this end, many of its 500 million practitioners around the world, though not all of them, have adopted vegetarianism. When discussing the Buddhist diet it’s important to recognize that each individual believer chooses to eat the way they do in accordance with their religious beliefs. Their dietary choices are not simply a fad or a method for losing weight but rather part of their cultural and religious practices.

Do You Have to Be Vegetarian to Be Buddhist?

The tendency of many Buddhists to follow a vegetarian diet stems from the tenet of ahimsa or nonviolence that is central to the religion. This principle calls for adherents to do the least amount of harm possible and avoid unnecessary killing. It is up to each individual to decide what this means for them and their diet. Instead of going vegetarian, some Buddhists will opt to prioritize preventing food waste over vegetarianism. While alive, the Buddha merely restricted his intake of meat but did not fully ban it. In fact, the Buddha’s last meal was tainted pork which led to the Buddha contracting food poisoning and death.

What Did Buddha Say About Meat?

In Chapter 8 of the Laṅkāvatāra Sūtra the Buddha discusses the consumption of meat. He advises those who have achieved higher levels of enlightenment to completely abstain from meat. He gives several reasons for doing this. Firstly, in Buddhism living beings are reincarnations, so consuming any living being would be like consuming a loved one or another person. Secondly, eating meat causes other beings to experience fear. If a person is known to consume pigs then the other pigs will be scared when they see that person coming. Another reason cited for not eating meat is that consuming meat would contradict the teaching of the Buddha and cause doubt amongst onlookers. The Buddha also cites the foul odor of raw meat and cooking meat as a reason to refrain from eating the flesh of animals. He goes on to discuss mental disquiet and bad dreams experienced by those who eat meat as another reason to abstain.

While many Tibetan Buddhists do abide by a vegetarian diet free of meat, this is not the case for all of them. Due to the sparse availability of fresh produce in certain regions, some adherents are able to eat meat so long as the animal was not killed expressly for their consumption and they do not witness the slaughter.

Those following a Zen Buddhist diet or shojin ryori abstain from consuming meat as well as other strong flavors such as garlic and onion. Consuming these foods is thought to cloud the ability to effectively meditate.

Why Do Some Buddhists Eat Meat?

There are a wide array of reasons why a Buddhist might consume meat, either occasionally or as part of their standard diet. Some Buddhists consume meat due to the lack of in-season, fresh produce in their region. Others recognize the suffering that goes into the production of fruit and vegetables via industrialized farms and instead opts to consume meat from animals that were not expressly killed for their consumption. Others choose to eat any food they are offered when they are hungry even if it does contain meat.

The dietary practices of adherents to Buddhism are varied based upon personal belief and interpretation of the religious teachings. However, there are a few dietary principles that are frequently followed.

Many Buddhists choose to follow a vegetarian diet to avoid causing suffering to animals. This is in alignment with the Buddhist belief in ahimsa, or doing no harm. Vegetarianism is especially important for those seeking higher enlightenment.

Alcohol and Other Restrictions

As with most aspects of the diet followed by Buddhist adherents, attitudes toward fasting and the way that it’s practiced vary from person to person. However, generally speaking, fasting is viewed as a voluntary act that should be done of one’s own will, and with guidance and supervision. For many in the larger Buddhist community, vegetarianism is also considered a form of fasting.

What Are the Pros and Cons of a Buddhist Diet?

Benefits of a Buddhist Diet

There are several distinct benefits, both ethical and for personal health, of following some general guidelines that are common in Buddhist diets.

Though not required for following the diet of a Buddhist, abstaining from meat and following a vegetarian diet is popular amongst adherents of the faith. Cutting out meat has been associated with several health benefits, including decreased risk of heart disease. Opting out of drinking alcohol also plays a key role within the Buddhist faith as the consumption of alcohol may make it more likely that other directives will be broken. Though forgoing alcohol is not strictly forbidden, its consumption is warned against and it should be limited. As is the case with giving up meat, not drinking alcohol has been associated with a number of health benefits including better brain function.

One of the biggest ethical considerations is that eating in line with Buddhist principles will reduce the amount of suffering incurred by our eating habits. This is a central consideration in Buddhist thought on eating. Even when meat is consumed, an animal should ideally not be killed for the express reason of being eaten by the adherent. Another ethical consideration is eating food that is in season and native to an area. Choosing fruits and vegetables that have developed to thrive in the ecosystem is a good way of supporting the environment and native wildlife. In the Buddhist tradition, these seasonal and local foods are thought to be the most appropriate as well.

Downsides of a Buddhist Diet

Following a diet derived from the ideas expressed in Buddhism may be a difficult endeavor if one is accustomed to a traditional western diet. Choosing not to consume meat, alcohol, and other strong flavors such as onions and garlic may make some social gatherings more difficult, as all three can play a central role in the foods offered in social situations.

What Do Buddhists Eat?

Though the specifics of diet vary based from person to person and region to region, many Buddhists consume a variety of plant-based foods, as well as dairy.

As in other diets, dairy can be added to various dishes and used as a flavor enhancer for otherwise simple recipes.

Fruit is frequently consumed, especially fruits that grow naturally nearby and are in season. This is in alignment with the belief that the foods being provided by the earth at any given time are the ones that should be consumed to ensure the best health and religious outcomes.

Grains are eaten in a variety of forms including rice and noodles. Other recipes use bread as a base for other ingredients. The primary takeaway is an emphasis on eating simply.

Legumes are another popular choice for Buddhists. They can be used in a variety of ways, including in stews.

Many Buddhists may choose to consume nuts, especially if they are adopting a vegetarian diet and need supplemental forms of protein.

Healthy oils are frequently consumed by adherents of the Buddhist faith and can be used for cooking or dressing meals.

Starchy vegetables are popular within a typical Buddhist diet, especially potatoes. These extremely versatile foods can be cooked in a variety of ways in a vast array of dishes. One such dish calls for them to be made into a paste and stuffed into a gourd before being cooked.

Vegetables make up the largest portion of the diet of many Buddhists, especially those following a vegetarian lifestyle. Depending on where the adherent lives they may choose to consume any of a wide range of leafy greens, peppers, roots, or other vegetables.

What Foods Are Forbidden in Buddhism?

Buddhism does not have a specific diet that all adherents must follow. Instead, it simply asks that harm to living beings is reduced and that clarity of mind be prioritized. Many interpret this as giving up indulgences such as meat and alcohol.

Though not expressly forbidden, many Buddhists choose not to consume alcohol and other drugs as they make it more difficult to achieve clarity of mind for meditation.

For those Buddhists that are following a vegetarian diet, eggs and poultry are not eaten. This is because they cause suffering to animals.

Though some Buddhists who have not adopted a vegetarian diet may eat fish from time to time, those that have adopted a diet free of the meat of animals do not consume fish.

Though not strictly forbidden by Buddhist teachings, many of those following the Buddhist religion opt out of eating meat so that they are not causing suffering to animals. This is especially pertinent given the belief in the ability of any living being to reach enlightenment. If a living being is eaten then they are being cheated of the opportunity to reach enlightenment during that lifetime.

Many adherents of Buddhism opt not to consume strong flavors such as garlic and onion as well as other strong spices, as they are thought to cloud the ability to meditate most effectively.

A frequently eaten breakfast for Buddhists consists of oats or porridge with toppings such as fresh fruits and cinnamon.

Lunch for Buddhists can be extremely varied depending on the individual. Regardless of the specifics, lunches tend to be simple and include mostly vegetables and sometimes a starchy root or grain, or some dairy. An example might be an apple salad.

Buddhism is about adaptability and changes from place to place. The strictest adherents in Thailand may only eat one or two meals a day while those in China typically eat three. Perhaps most important is that adherents eat enough to sustain their body and health. Toward this end, a snack can be any food that helps achieve this goal. Perhaps a quick slice of cheese and tomato toast.

There are plenty of dishes that can be eaten for dinner, including monkey head mushroom soup or tofu avocado salad.

One thing that you can do is try out a Buddhist recipe. Taste of Zen by the International Buddhist Society provides a wide array of meals with which to start. If you’re seeking to further support Buddhists, consider donating to the Society so that they can continue serving people and showing them their path to enlightenment and mind clarity.

The Past, Present, and Future of Animal Welfare in China