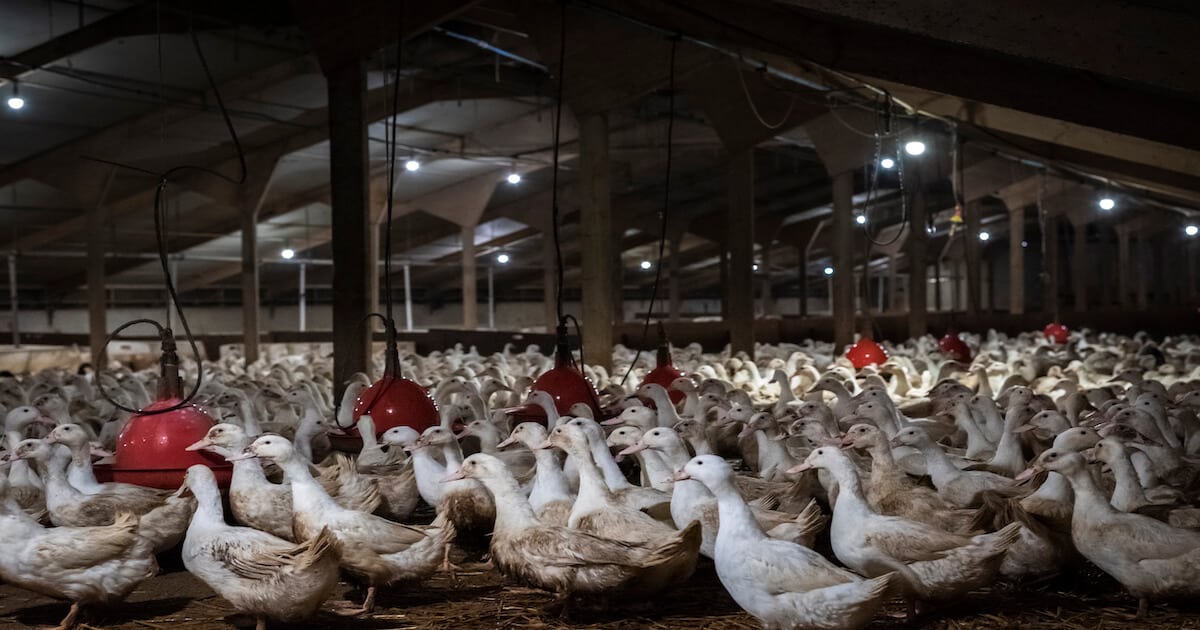 Ducks are synonymous with water. Having access to an adequate supply is fundamental to their physical and mental well-being. As semi-aquatic animals with webbed feet, waterproof feathers and a natural buoyancy, they not only need water to drink but also to dabble, preen and bathe.

Water deep enough to dip their heads is a necessity that allows ducks to keep the mucous membranes around their eyes clean and moist – something that can lead to blindness if denied. Water deep enough to dabble also helps them wash away mites and parasites, regulate their body temperature and activate an oil gland in their tail to protect their feathers as they preen.

Locked inside factory farms across the U.K., millions of ducks are being robbed of this most basic freedom to express their natural behavior – a right that the government claims to protect under the Animal Welfare Act 2006. Viva!’s latest undercover investigation into a commercial duck egg facility reveals the disturbing reality of what a duck’s life is like, separated from the pond.

Warning: This story contains images that may be disturbing

It has been more than two decades since Viva! first exposed foul conditions inside British duck farms, starting with a Kerry Foods facility in 1999 that reared waterfowl for meat. Undercover footage throughout the early noughties revealed thousands of filthy ducks waddling around in their own excreta, with numerous injured birds in obvious pain and distress due to a lack of access to open water. Despite such a clear violation of animal welfare laws, it appears little has changed over 20 years later.

In January 2022, Viva!’s investigation team received a tip-off about a duck egg farm in Lincolnshire. They were producing Quack! Duck Eggs for Lincolnshire Co-op stores and supplying the nation’s largest egg distributors — Noble Foods and Stonegate — who stock their products in all major British supermarkets.

The informant — an ex-employee at Field Farm — showed us disturbing images of workers swinging sick and injured ducks around by the heads, rotten corpses in overflowing bins and filthy water-logged sheds. They also described a dangerous lapse in compliance with biosecurity regulations during the largest outbreak of avian influenza or bird flu the U.K. has ever seen.

“Our Quack! Queen enjoys the best in life in her spacious, airy barn. Her food is prepared to her specific dietary requirements and she has access to plenty of fresh running water from her bespoke drinker system. Her nest-box, lined with a straw bed, is topped-up daily for ultimate comfort.”

Their website — which has been removed since the release of Viva!’s exposé — previously stated that they put lots of “time, energy and care into our layer ducks” because it is important that “our birds are as happy as can be.” The reality, however, is a far cry from the “highest standards of care and welfare” myth that a spokesperson for the company, the animal farming industry and our government perpetuates.

To Viva!’s investigators, it was immediately clear upon entering the farm that something about the company’s image was not right. That “spacious, airy barn” was in fact a dilapidated cesspit, bursting at the seams with sodden litter, a fetid stench of ammonia and thousands of filthy ducks without access to clean water baths.

Their feed troughs were caked in muck, shared with mice and feral pigeons — increasing the potential for diseases to spread between wild birds and domesticated poultry — and their “bespoke drinker system” was little more than a water hose dripping into a line of dirty bell drinkers, not a tiny bit deep enough to dip their heads. It stunk of grave discomfort; hard plastic nest-boxes included.

One duck in particular caught the team’s attention, her eyes dry and blank, blinded by life in a factory farm. She often stood separate from the flock, unsure of her surroundings and cowering in a corner. Other ducks were found to be severely lame — unable to walk or stand — sliding along piles of decaying litter on their bellies. Their wings were splayed for balance.

To their surprise, Viva!’s investigators also identified numerous male ducks, called drakes, mixed in the flock and identifiable by a ring around their legs. Workers were aware of their presence and did little to protect any of the lame females in prone positions from frequent mating rituals — a notoriously aggressive act in ducks.

Fertilized eggs inevitably end up in the food chain and have led to multiple sensational stories like Deza Empson’s, who hatched live ducks from a box of eggs purchased from Morrisons. In response, the egg supplier (who also happened to be Stonegate) said it was likely that a drake had “accidentally ended up among their flock of ducks.” But in the case of Field Farm, mixed flocks were clearly no accident.

Following the release of Viva!’s findings, Lincolnshire Co-op, Noble Foods and Stonegate all suspended purchases of duck eggs from Field Farm, pending further investigation. Determined to make an impact locally and have our voices heard, we organized a demonstration outside a Co-op store in Lincoln to urge consumers to make better food choices, and demand Lincolnshire Co-op severs its ties with Quack! Duck Eggs for good.

Disappointingly, Stonegate reinstated Field Farm shortly after the suspension, claiming to have found “no evidence of compromised animal welfare” and that “several breaches of standard hygiene and biosecurity practices” had been rectified — less than one week after the investigation’s findings were released.

The U.K. duck egg industry has especially lax welfare regulations. Adhering to welfare guidelines is voluntary and producers are apparently exempt from even the government’s Animal and Plant Health Agency’s egg marketing guidelines. Not a single duck egg Viva!’s team found in numerous supermarkets was labeled – evidence of a systemic failure of transparency in duck egg farming.

Lincolnshire Co-op announced on July 21 that they have decided to delist Quack! Duck Eggs as a supplier, removing all products from their stores, though the reason stated for this move is a review of sales, wastage and product mix rather than the vile disregard for animal welfare and dangerously poor biosecurity practice exposed at Field Farm.

Undercover investigations are a vital tool for exposing our broken food system and remain a key instrument to propel change forward. By revealing the true harm intensive animal farming causes not just the animals themselves, but also the planet and public health, investigators hope their work motivates consumers to demand better.

Viva!’s investigation into duck egg farming is part of a bigger series under the campaign: End Factory Farming Before It Ends Us.