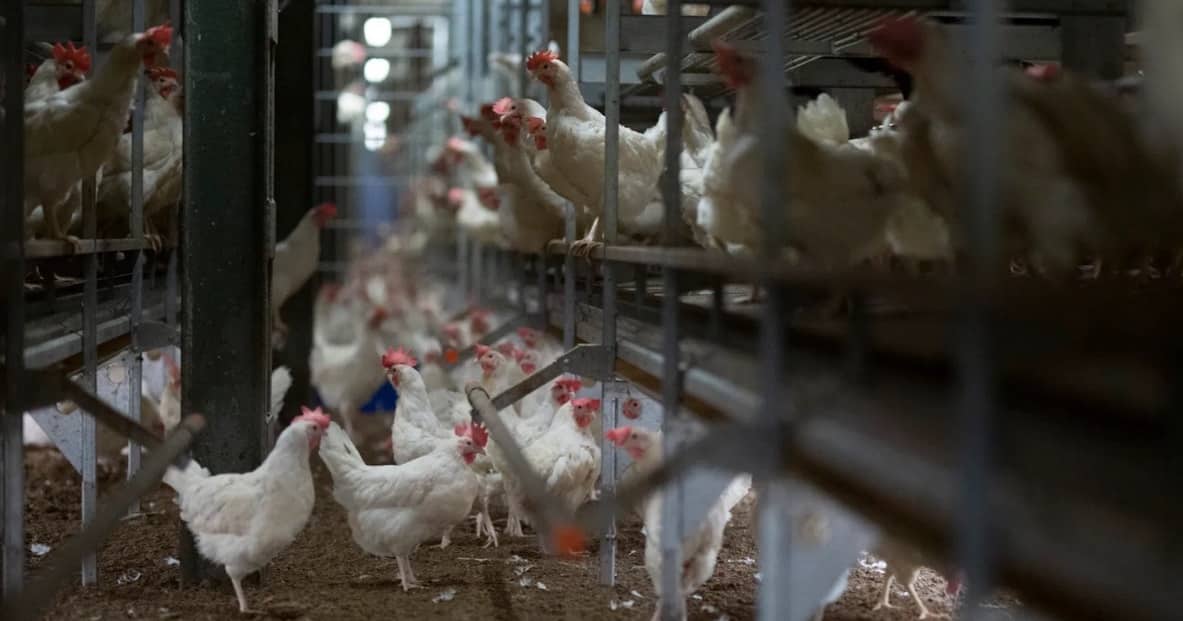 Egg production is far from the idyllic image of a mother hen sitting atop her nest. Big Ag has corrupted the process, creating cheap eggs at the expense of billions of anguished chickens. The desire to maximize revenue, combined with decades of selective breeding for the most productive chickens, has led to each farm, and each chicken, creating staggering numbers of eggs. However, this comes at the cost of the chickens themselves who have no means of escape.

As the profits of the egg industry skyrocket, the suffering of the chickens rose as well. Even the highest welfare farms practice the needless killing of male chicks. Read more to find out what you can do to reduce their suffering.

How Are Eggs Produced?

Battery cages are a major cause of chicken suffering, and the use of battery cages is still the most common method of raising egg-laying chickens worldwide. In the countries that are part of the International Egg Commission, which includes Nigeria, the U.S., Brazil, and Germany, about 88.7 percent of hens are kept in battery cages.

The EU and UK recently introduced battery cages with enriched cages. This name, however, is misleading. Before the UK outlawed battery cages, hens shared lived in cages about the size of a sheet of paper. In their new cages, hens are given just 50 additional centimeters to spread their wings. They do have some other enrichments in their cages, like perches, litter, and nests, but enriched cages are still a shocking spectacle compared to what a high welfare egg farm would look like.

In the U.S., about 80 percent of hens are confined to battery cages, according to 2019 numbers. Battery cages prevent chickens from participating in a wide range of natural behaviors like dust-bathing, foraging, roosting, and bone maintenance. Bone problems are common, and the cramped space causes frustration and more aggression and in-fighting between birds.

Barn eggs are a higher welfare option, although still far from perfect. Barns provide more space for chickens to move around, explore and stretch their wings. There are also perches for the birds on which to roost. However, these can still be rather crowded, with up to 6000 chickens in a barn. The chickens still have very little to do and live the vast majority of their lives indoors, subjected to artificial lighting.

Although there are regulations about how much freedom to move around free-range birds have, more often than not, they do not roam lush outdoor pastures, as one might imagine. They remain indoors for most of their lives, and while they may have more space to explore, there is often very little for them to investigate. Although these birds must have some access to the outdoors, the term “free-range” could mean access to a small wired-off area that many of the birds will not use. The crowded and chaotic nature of some free-range farms is often shocking to some consumers. That’s because it does not reflect the promise of more humane conditions that comes with the label.

Organic is the highest welfare option for commercially raised chickens, yet there is still plenty of suffering in organic egg facilities. Because organic chickens are often spared the pain of debeaking, this means that their beaks remain sharp, and the chickens hurt each other more when pecking. At organic egg production facilities, pecking and in-fighting still go on due to their insufficient space.

Additionally, while organic chickens are raised without antibiotics, which helps prevent antibiotic resistance, they are at risk of contracting painful diseases and potentially passing these on to their human handlers. With such fatal diseases as the Spanish Flu, which killed some forty million people, linked to chicken farms, this lack of protection from illness endangers both chickens and surrounding communities.

Eggs are kept in incubators for around three weeks until they begin to hatch. In nature, the mother hens would incubate the egg herself. After 21 days the chicks begin to emerge.

When the eggs hatch, the chicks are placed on a conveyor belt and are checked whether they are male or female. All of the male chicks and some of the weaker females are immediately killed. They are either suffocated with gas or asphyxiated in plastic bags. Others are macerated, essentially blended alive.

The remaining chicks have the sharp point of their beak removed with either a hot knife or a laser. These processes are both extremely painful, as chickens’ beaks contain a sensitive membrane and nerve endings. A beak to a chicken is what both hands and mouths are to us, and it is their primary tool for navigating the world; to deform this is a huge handicap on their quality of life. As a consequence of the operation, birds often eat less, peck less, become lethargic and inactive, and can no longer groom themselves or ward off lice effectively. The birds are also vaccinated against the many diseases that occur in densely packed chicken farms.

Adolescent birds are known as pullets. These pullets are raised in barns or staged layer facilities so that the transition is less stressful. After 16 weeks, the birds are well-feathered and have a better ability to thermoregulate. They are then transported to a laying facility.

The birds will have a period of adjustment in the laying facility until they are about 19 weeks old. At this stage, they will begin to lay eggs. Hens reach a peak egg-laying rate of one egg per day when they are about 25 to 39 weeks of age. Hens are kept under constant artificial lighting, manipulated to ensure maximum productivity. The lights are usually dim to keep the birds operating at low activity, yet never completely off. This differs in the EU, where chickens must get 8 hours of darkness a night.

Regardless of their age or sex, chickens in the vast majority of farms will never see daylight or go outside, apart from perhaps a brief moment when they are spent and taken to slaughter.

How Many Eggs Can a Hen Produce in a Day?

Each chicken can produce a maximum of one egg a day. It takes about 26 hours between laying an egg and the next one to develop. On average, this means a chicken will produce two eggs every three days.

The number of individual eggs produced by the world each year is hard to approximate, so it is described in tonnes: 84.36 million metric tonnes of eggs were produced worldwide in 2019, with an egg weighing an average of 50 grams. That comes out to about 1.59 trillion eggs.

How Long Do Chickens Lay Eggs?

The average life span of a bird is around 72 weeks, but many don’t live that long. The abnormal amounts of eggs that these chickens lay often result in calcium deficiencies, meaning many birds suffer osteoporosis and subsequently a high percentage of broken bones, with some between 3 percent and 17 percent of U.S. birds suffering fractures.

What Happens to Old Laying Hens?

Old laying hens are slaughtered, usually by CO2 gas. Their meat is considered too tough for human consumers and is sold to pet food companies and zoos, where it goes to feed a wide range of pets and animals. Old hens are sometimes also rendered down into oils that are used in various industries or simply chucked into the garbage.

There are about 24.9 billion chickens in the world, including both layer hens and broiler chicken. It is unclear how many of those chickens are egg-laying hens. In 2019, 82.17 million metric tonnes of eggs were produced worldwide. Modern layer chickens tend to produce between 276 and 300 eggs a year and have. Egg production is continuing to increase worldwide and has risen by 25 percent in the last decade.

As stated above, the vast majority of U.S. hens are kept in battery cages, as many as 80 percent of them. However, there are some promising signs of change. Huge egg consumers like McDonald’s and Denny’s have been moving towards cage-free eggs. That seems to be where the direction of change is flowing. However, as discussed above, cage-free does not mean cruelty-free. As long as male chicks are killed en masse and chickens live in unsanitary conditions, unable to express their natural behaviors, the word “humane” will remain inappropriate for egg production.

Eggs are sold in supermarkets to the catering industry and the food production industry that uses them in foods like cakes and pastries. American consumers preferred store-brand eggs to any other, with 204.9 million Americans using store-brand eggs in 2020.

Eggs are not dairy products. Dairy products are exclusively those products made from an animal’s milk. Only mammals produce milk, and chickens are birds. Eggs contain the material that develops into an embryo and then a chick, but before it is fertilized.

Human beings have been eating chicken eggs for thousands of years. However, the modern egg industry is a breed unto itself, where chickens are crowded into tiny cages, where their rich social lives are stifled and crushed. Even in free-range systems, chicken welfare is often abysmally low, and organic chickens are prone to hurt each other and spread disease.

The modern layer chicken has changed dramatically from its red jungle fowl ancestors, who laid twelve eggs in a year instead of three hundred. Such changes have been at the immense expense of the well-being of these birds. Consumers must choose if their eggs are worth more than the lives of billions of innocent animals.