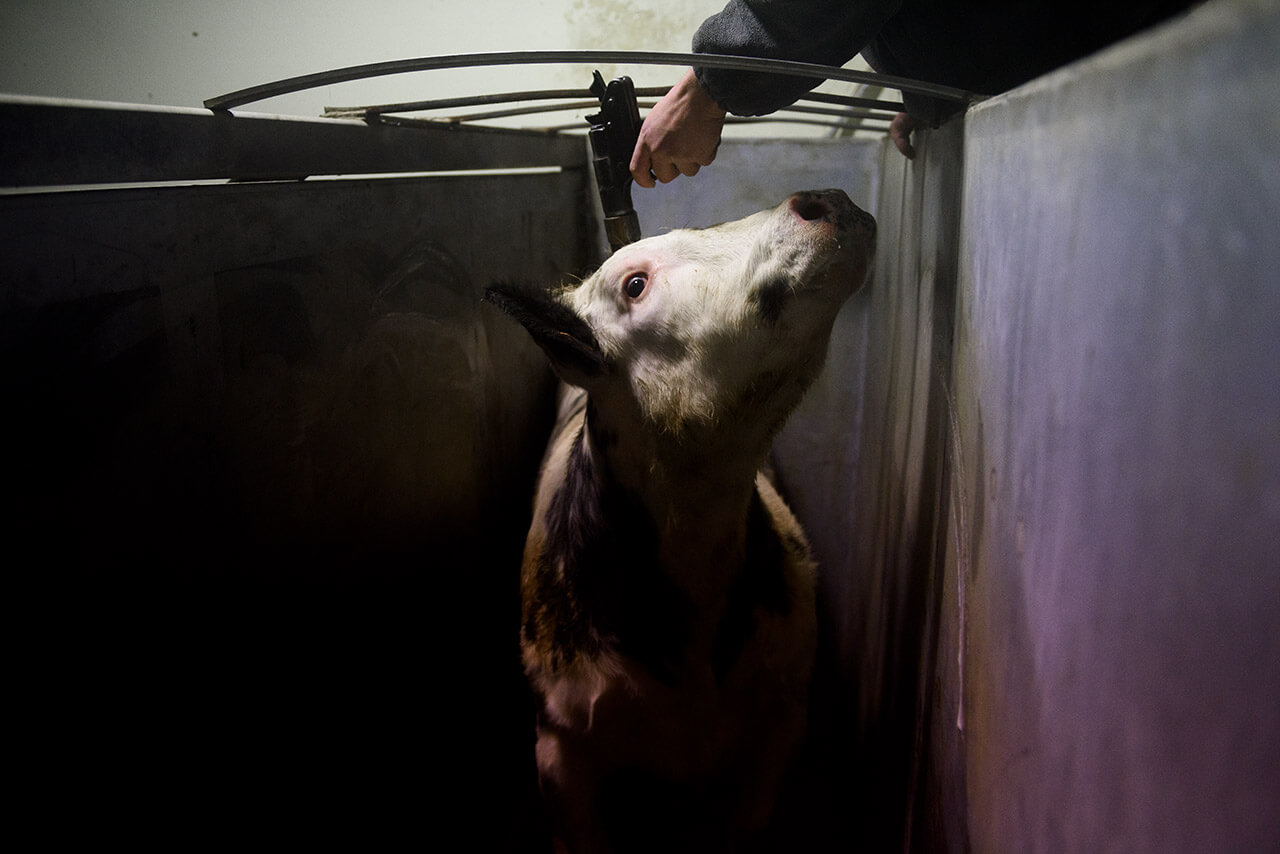 Investigators have a sympathetic lens. They anticipate capturing cruelty inside factory farms, and most of the times, they aren’t wrong.

Factory farms operate in the dark. The fact of the matter is that animal cruelty is standard practice—not on some factory farms—but all of them. Without proper legal protections, undercover investigators risk their livelihoods to shed light into the darkest corners of the highly secretive factory farming industry.

“The chickens are panicking. Many of them are squawking loudly, some are just sitting there trembling. Sometimes you catch one looking up at you, eye to eye, and you know it’s terrified,” said Virgil Butler, a former Tyson slaughterhouse worker who became an animal rights activist. He was one of the first of his kind. “No one can convince me that the chicken did not know what was about to happen.”

The tone inside slaughterhouses is frighteningly straightforward. If you think you’re moving fast, move faster. Photojournalist Jo-Anne McArthur, who has spent the good part of a decade investigating factory farms, says overseers yell orders at workers on the kill line from above. “Be like a hummingbird.”

Factory farm workers on the kill floor learn quickly that caring is not part of their job description. For others, the psychological effect that extended exposure to traumatic work conditions–like killing more than 40 animals a minute for as little as $6 an hour–has on their personal lives often goes unseen. The speed is for machines, not people. Investigators report symptoms of PTSD, anxiety, and other related mental health conditions that they attribute to the time they spent undercover as slaughterhouse workers, while the majority of farmworkers stay silent for fear of losing their job.

Torturous labor conditions are well hidden on factory farms, especially for those working on the kill floor, where “cutters” sharpen their knives every 20 seconds.

Slaughterhouses operate on efficiency with absolutely no reservations. Over the course of 10-plus years investigating labor conditions on the kill floor, she’s seen workers lose fingers on the line. “That’s how sharp the blade is,” she said, “and that’s how dull it gets after 20 seconds.”

Trauma, PTSD, anxiety, and other related mental health conditions are not nearly as well-documented as labor abuses in the factory farming industry, due in part to the socioeconomic status of factory farm workers. They need the job and therefore cannot afford to speak up. Many farm workers are also undocumented immigrants. More often than not, the language barrier and lack of insurance make it virtually impossible for farm workers suffering from a mental health condition to see a doctor or talk to investigators.

McArthur described her experience at one particularly gruesome slaughterhouse where she met “the guy with the nail.” His job was to prod pigs with the massive nail that he held clenched between his fingers like a set of keys. He was disturbingly calm, herding frightened, squealing animals in and out of transport vehicles with a bloody nail and smoking a cigarette.

“He just stood there, brazen… violent, in front of a woman with a camera,” said McArthur. “The look on his face said, ‘This guy does not give a fuck.’”

For those doing the cutting, speed kills. The quicker they work, the easier it is to make mistakes. Unless you’re good, McArthur says. If you’re good then you put your head down and do your job.

This is standard practice

According to McArthur, instead of seeking treatment or quitting their jobs, most slaughterhouse workers shield their conscience and try not to care. The horrible violence they’re subjected to becomes the means to a terrifying end.

On the line, animals are no longer sentient beings. They’re pieces of meat, and most meat companies are so far removed from the animals’ suffering that they can’t even see, let alone feel the horrific amount of animal suffering that takes place on factory farms.

Factory farm workers, on the other hand, regularly witness gothic horrors considered standard practice by the industry like disbudding—when a baby animal’s horns are literally clipped off, usually without the use of local anesthetic—extreme confinement, and mass slaughter.

On factory farms, cruelty is hiding in plain sight. Most of the people who see something cannot say something, and so they become victims, too.

During one of her investigations in Europe, McArthur found herself at a farm without the boss present. For the first time in over a decade of reporting, farm workers ran up to her, asking where they could find a better job. Desperate, farm workers even asked if she knew of any work for them back in Canada, where she lives. They were ready to drop everything and move halfway around the world if it meant escaping hell on that factory farm.

The animal agriculture industry does everything in its power to normalize the violence that takes place on factory farms. It’s contagious and the industry is well aware of that. Let’s call it a cycle of mechanized killing. In this cycle, killing stations become assembly and disassembly lines. Immigrant laborers are separated from their families, left with no means to return.

Small towns in rural America become safe havens for the crimes of animal agriculture because no one can see the trucks, no one can smell the farm, and no one—absolutely no one who is asking questions—is let inside. Before they know what is happening, workers on the kill line lose sight of the individual expression that this is a living animal. Their only task is to keep line speed up or get fired.

“As a worker I’m not killing because I’m a psychopath,” said Sean Thomas, who spent 15 years of his career undercover as a worker on factory farms and is now the Director of Investigations at Animal Equality. “I’m just doing my job.”

That is the cold, hard truth. Factory farms are designed to remove workers from thinking that anything is alive, independent, or even a living being. When the cow steps off the truck, it is already a piece of beef. Cruelty moves forward through this process of intense normalization on factory farms.

“We have a lot of beef to kill today,” an overseer announced to Thomas and a room full of slaughterhouse workers watching thousands of animals herded off of a truck as a buzzer sounded and the line started moving.

Even in the face of substantiated claims of criminal animal cruelty, it’s hard to point to one example or even hundreds of examples from factory farms and say these are the crimes of animal agriculture. They are not few nor far between. This is standard practice, and the entire industry is complicit.

“We always have this narrative challenge to present the unvarnished truth. There is really no other access that people have to what’s going on on a daily basis,” said Cheryl Leahy, Executive Vice President of Compassion Over Killing.

Warning: This video from Martin Farms, a Nestle supplier, is hard to watch. But there’s a lot of research that says shock value does work—that there are things that just need to be seen. Footage from a dairy farm investigation at Fair Oaks Farms, which shows calves being dragged, thrown, and kicked in the head by farm workers, has 5.1 million views already this week.

“But of course you have to let everybody engage with these facts and make their own decisions based on their values and understanding,” said Leahy. “Look, there’s a reason animal cruelty exists. It’s because people buy dairy.”

The investigator’s job is to deliver that truth.