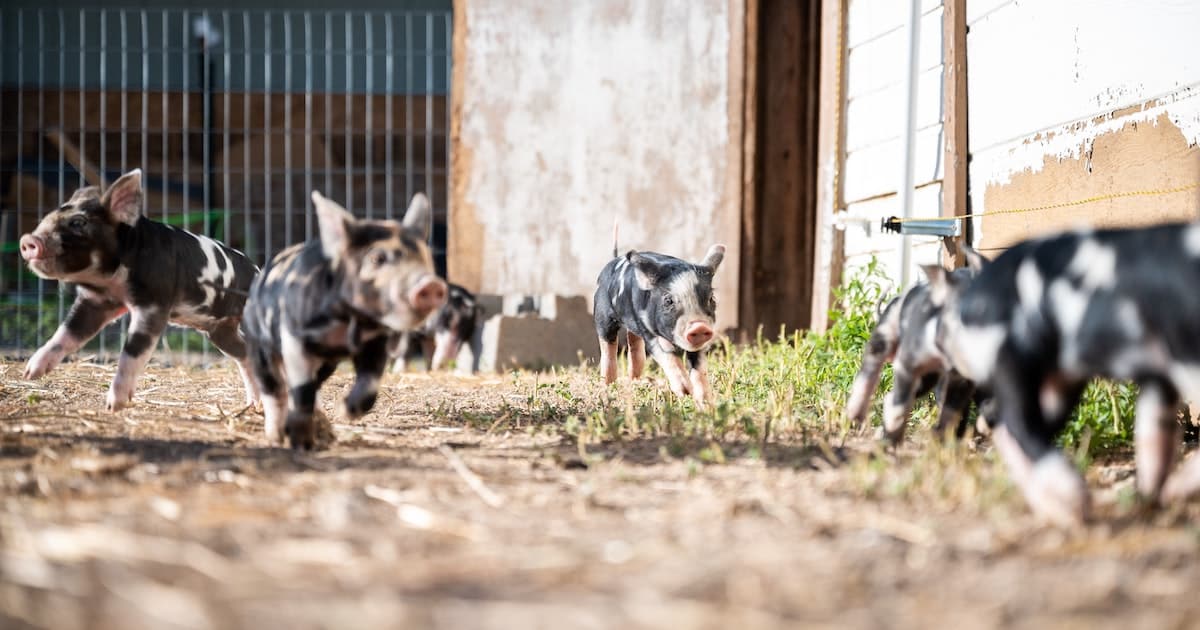 Why We Love Some Animals and Eat Others

Pigs are widely misunderstood as dirty, lazy, and unintelligent creatures. However, this couldn’t be further from the truth, as even many of the farmers that raise pigs for eventual slaughter will attest to their sensitivity and intelligence. Pigs are, in fact, clean animals that enjoy swimming more than wallowing in mud, share strong bonds with their families and young, and can even beat a chimpanzee at video games.

Despite the true nature of pigs being charming and intelligent, our opinions of them can often be colored by the ways they behave when confined in factory farms where their social orders are destroyed, they are unable to use their senses effectively to communicate with each other due to the stench and noise of the barns, and they don’t have the space or the straw to maintain the clean living environment that they enjoy.

Any large animal veterinarian, farmer, or anyone that has spent time interacting with pigs can tell you how intelligent they are. One study carried out in Brazil, the world’s fifth-largest pork producer,  found that when interviewed all 44 participating pig farmers believed that pigs are capable of feeling pain. Participants also overwhelmingly agreed that pigs are sentient beings that can feel stress, fear, and joy. Farmers additionally attributed personality traits to the pigs including stubbornness, friendliness, and gluttony. A whopping 73 percent of the farmers agreed that the pigs in their care are intelligent.

Pigs are considered to be the fifth most intelligent animal in the world. Among the indicators of pigs’ intellectual abilities is the ways that they interact with each other and members of other species, their ability to display emotional contagion, their natural desire to maintain a clean living space, and their ability to feel pain and suffer.

When allowed to live naturally, pigs will form groups of roughly eight females that will all give birth around the same time. When young do leave the group, many may choose to stay nearby forming larger, more loosely connected associations with up to 30 members. Hierarchies are formed relatively early on in the pigs’ life and play a key role in ensuring the groups remain harmonious. Their ability to recognize each other individually works to help maintain social hierarchies.

In order to keep everyone fed, one sow, a female pig, will stay with the piglets while all of the others forage for food. We have already recognized 20 distinct sounds that pigs use to communicate; different lengths of these sounds mean different things. For example, pigs emit short grunts when they are excited. The fact that pigs create social hierarchies even when blindfolded indicates the importance of vocal and olfactory communication.

Pigs Are One of the Cleanest Animals

Contrary to popular perception, pigs are very tidy animals. When left to free-roam they will choose one area in which to defecate and urinate to maintain the cleanliness of the rest of their living area. Piglets start using this area as young as five days old. Individual pigs have been known to not only maintain a clean environment but to decorate their living space as well by selecting flowers and other items and incorporating them into their nests.

The misconception regarding pigs being dirty stems from their need to wallow in mud in order to stay cool, as they do not sweat. Following wallowing, pigs will use the bark of trees to rub off any dried mud. Pigs are natural swimmers and, if given the option, prefer to swim in water than to wallow in the mud.

They Feel Pain and Suffer

When in pain pigs scream, a sound heard frequently on the factory farms where thousands of pigs spend their short lives before being sent to slaughter. Even those unfamiliar with pigs and their intelligence are able to recognize suffering when they hear the high-pitched squeal of a pig in pain.

Research has suggested that pigs experience “emotional contagion”. In one study picks were trained to anticipate either negative or positive stimuli using music. When an untrained pig was placed in a pen with a trained pig, the untrained pig displayed behaviors similar to those of the trained pig when the music was played. When negative stimuli were expected by the trained pig both pigs showed more signs of stress such as increased defecation and urination and lowered ears. When positive stimuli were expected both pigs showed higher levels of excited behavior such as grunts and tail wagging. This also demonstrates that pigs can experience a breadth of emotions ranging from positive to negative.

Pigs are widely considered to be more intelligent than dogs and equally as intelligent as chimpanzees. They share the ability to perform a number of cognitive tasks with other highly intelligent animals such as dolphins and elephants. In various studies, pigs have demonstrated that they have long-term memory, can learn and comprehend a simple symbolic language, and learn and remember complex symbols for particular actions and objects.

Why Do We Love One and Eat the Other?

The animals that we choose to love and those we choose to eat are completely arbitrary and based on no clear rationality. Dr. Melanie Joy, author of Carnism: Why We Love Dogs, Eat Pigs, and Wear Cows and professor of psychology and sociology at the University of Massachusetts-Boston, coined the term carnism to explain the discrepancy. She argues that those who choose to consume animal products do so because of the Three Ns: normal, natural, and necessary. The arbitrariness of this reasoning is highlighted by the vast array of animals that are, and aren’t, eaten around the world. Hindus, for example, do not eat cows and instead consider them to be a symbol of life whereas in Italy horse meat is considered good for the young and those recovering from illness.

Thankfully, Dr. Joy believes that in the future eating animals, including pigs, will no longer be the norm. She notes that support for and interest in veganism has already been increasing in recent years with more and more people reducing their meat consumption. She highlights that encouraging this behavior is key, as few people go vegan overnight, and any progress, no matter how small, is still progress.

How Intelligent Are Pigs in Human Years?

Pigs are able to outperform three-year-old human children on cognition tests. This age was determined based upon the shared abilities of pigs and children of the age. At three years old a child is all about learning and exploring, enjoys playing, and shows self-awareness. This is also the case for pigs which demonstrate distinct likes and dislikes, enjoy playing creatively, and display a range of emotions similar to those of a child.

There are many interesting behaviors and preferences of pigs that highlight the species’ high intelligence. Below is just a sampling of facts that might surprise you about pigs.

Building Compassion in the Food System

Despite their sensitivity and intelligence, millions of pigs suffer on factory farms every year in order to adorn the plates of diners globally. The conditions in which they are housed contradict most of their natural behaviors and preferences. Pigs don’t deserve to suffer, forced to live in their own filth and be bred repeatedly only to have their babies taken away from them again and again until their bodies are no longer able to take the strain.

Imagining a pet being housed in these conditions and experiencing this suffering turns the stomach. The knowledge that this is the harsh reality for pigs, a sentient being even more intelligent than dogs, should elicit a similar response for self-proclaimed animal lovers.

Thankfully there is an action that can be taken. By eliminating, or reducing, meat consumption people can help to limit the number of pigs that endure the torture of life on a factory farm. With so many delicious and inventive plant-based foods and proteins available globally there is no reason that these animals should suffer.