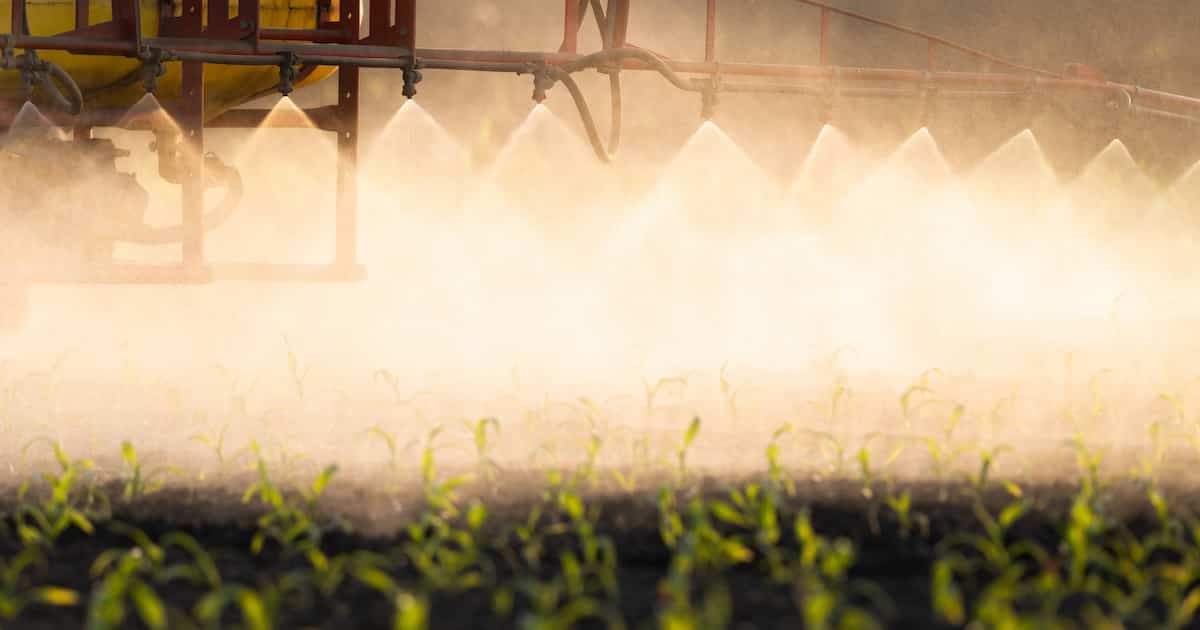 A new report reveals that in 2018, the most recent year that data was available, an estimated 235 million pounds of pesticides were used to grow feed crops for farmed animals in the United States.

Driven by the demand for meat and dairy products, the use of pesticides in agriculture is unlikely to slow down. The global market for crop protection, which is currently estimated to be approximately $60 billion, is projected to reach close to $81 billion in 2028. The U.S., China, Brazil, and India are among the top ten pesticide-consuming countries in the world.

“It is not surprising that the increased use of toxic pesticides on corn and soy has coincided with increasing meat and dairy production,” says Cameron Harsh, Programs Director, World Animal Protection, an animal protection organization that published the joint report with the Center for Biological Diversity earlier this year.

From Iowa to Rio de Janeiro, farmers rely on pesticides to maximize their crop yields. But most of that food never reaches our plates. That’s because, since the dawn of factory farming in the early 1960s, most Western farmers have focused on growing cheap, high-calorie crops—like corn and soybeans—to feed the world’s growing farmed animal population.

In the U.S., the poultry sector is the primary consumer of soybeans, followed by pigs, dairy, beef, and aquaculture. Over 70 percent of soybean and almost 50 percent of corn produced in the country are used in animal feed. Together, they account for more than 50 percent of the pesticides used today.

Pesticides use and factory farms

Farmed animals are fed a diet of high calories and pharmaceuticals such as antibiotics to help them convert food to meat in a short time. Every 100 calories of soybeans and corn fed to animals are converted to approximately 17–30 calories in the form of meat. And so pesticides have become a critical resource that helps farmers feed more than 50 billion animals on factory farms around the world.

U.S. farmers use approximately 400 different pesticides on their crops. The overwhelming majority of pesticides are sprayed directly onto plants, exposing humans and non-target plant and animal species to harsh chemicals in a number of unexpected ways. For example, the amount of glyphosate residue allowed in animal feed is more than 100 times that allowed on grains consumed directly by humans. When farmed animals consume enough of it, pesticides begin to accumulate in their fat tissue, which is later ingested by humans who choose to eat meat.

A large portion of pesticides also seeps into the soil and leaches into the water table, contaminating local ecosystems and killing non-targeted plants, birds, insects, and beneficial microorganisms. Pesticides also leach into the groundwater and the surrounding bodies of water and can negatively impact the lifecycle of aquatic animals, plants, and amphibians.

Fish are particularly vulnerable to pesticide exposure. Even when exposed to pesticides at low concentrations, they experience convulsions, difficulty breathing, and loss of metabolic function. “​​To anyone with even a rudimentary knowledge of toxicology, it exceeds all limits of credibility that a compound lethal for insects, fish, birds, chickens, rats, cattle, and monkeys would be nontoxic for human beings,” writes Morton Biskind, a Manhattan-based physician who famously documented the effects of DDT on humans in the late 1940s.

Impacts on farmworkers and surrounding communities

Farmworkers and their families are more likely to suffer from direct pesticide exposure and its downstream health effects. Pesticides contain toxic, hormone-disrupting chemicals, and long-term exposure to pesticides is associated with a host of adverse health effects including an elevated risk of childhood and adult cancers, disorders of nervous and reproductive systems, and cognitive impairments such as autism spectrum disorder.

Research has also shown that populations with direct exposure to pesticides are often communities of low income and wealth, race, and ethnicity. A recent study underlines the relationship between the use of pesticides and the historically marginalized Black, Indigenous, and People of Color (BIPOC) populations it disproportionately impacts the most. These findings echo previous studies which have shown that persistent exposure to pesticides is one of the factors that drive health disparities in historically marginalized communities.

Marginalized communities and BIPOC are also impacted disproportionately via the manufacturing, storage, and disposal of pesticides. Studies across the U.S. show that Latinxs and African Americans living below the poverty line are more than twice as likely to live within a mile of a hazardous chemical facility.

There are currently 31 pesticide manufacturing facilities across the U.S. that the Environmental Protection Agency (EPA) has reported to be in “significant violation” of environmental protection laws including the Clean Water Act and the Clean Air Act. Not coincidentally, an average of 44 percent of the residents within a mile of the 31 pesticide manufacturing facilities had incomes less than two times the federal poverty level.

Globally,  populations most likely to have to deal with the direct effects of pesticide exposure also show a strong correlation to race, ethnicity, and low socioeconomic status. An estimated 44 percent of farmworkers worldwide experience symptoms of unintentional, acute pesticide poisoning, according to a  review published in 2021. The symptoms of acute pesticide poisoning include headaches, nausea, dizziness, and irritation of the skin.

The  EPA currently allows the use of 85 pesticides that have been phased out or banned in either the European Union, China, and/or Brazil. For example, the pesticide paraquat, classified as highly hazardous to human health, was banned in the European Union as early as 2007. However, paraquat is still approved for use in the U.S., and in 2018, the agriculture sector used roughly 4.2 million pounds of paraquat to protect its crops.

In  2021, agricultural workers filed a class-action lawsuit against Syngenta, a major manufacturer of paraquat, alleging that exposure to paraquat has led to hundreds of cases of Parkinson’s disease. But the destruction does not stop there.

“The EPA has been allowing the ever-increasing use of chemical poisons throughout our environment,” says Lori Ann Burd, the Environmental Health Program Director and Senior Attorney at the Center for Biological Diversity, an environmental protection nonprofit that recently announced its intent to sue the EPA for approving 300 pesticides over the past six years.

“We call on the EPA to act to reign in the outrageous abuse of pesticides by implementing common-sense measures on the ground to protect waterways, wildlife, and communities from these poisons,” Burd says.

The EPA subsequently said that it plans to assess the harm that new pesticides could inflict on endangered species and critical habitats before approving them for commercial use. However, the assessment will only apply to new pesticides and will not impact the pesticides already approved for use on the market.