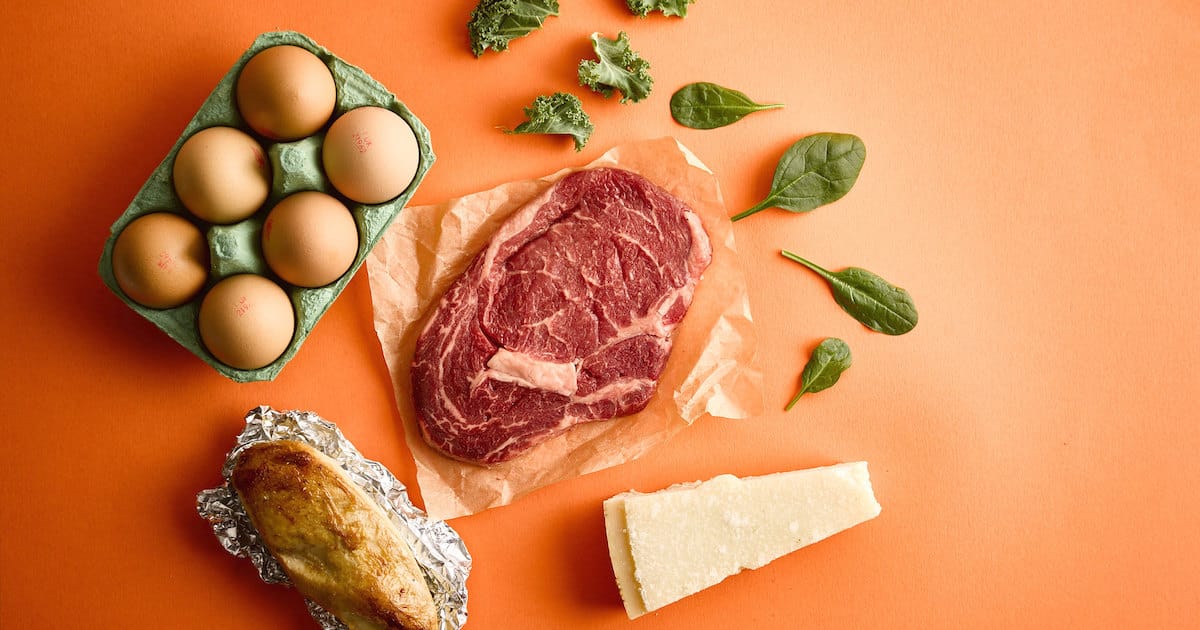 It’s no secret that the Western world needs a dietary intervention. Animal agriculture continues to be among the leading causes of greenhouse gas emissions, and without a major shift to a plant-based diet globally as well as at an individual level, the future looks bleak.

The question is, though, how do you make consumers aware of the carbon footprint of their food? Enter climate labels. Just as nutritional labels help consumers make the right purchase for their health, these labels, which are being added to restaurant menus and food products, are designed to help consumers make healthier choices for the planet.

Science, of course, shows that the best foods for planetary health are also the same ones that support human health: plants. So, could these climate labels inadvertently end up encouraging people to eat less meat? There is hope.

Climate labels are a new trend for restaurants

In 2020, the World Resources Institute launched the Cool Foods Meals badge to make it easier for consumers to choose climate-friendly meals when dining out. The launch was timely, as it followed on the tails of a survey conducted by the Yale Program on Climate Change Communication and Earth Day Network which found that 64 percent of individuals said they were either purchasing or eating plant-based foods to help reduce global warming.

That Cool Foods badge, which identifies dishes with a lower carbon footprint, was first embraced by Panera Bread, which became the first company to receive the Cool Food Meals certification. Today, when you look on Panera’s menu, you’ll see climate-friendly foods denoted with a bright green badge. As of October 2020, 55 percent of its menu was labeled as low-carbon Cool Food Meals.

One irony that should be noted, though? If you look at the infographic on Panera’s website, fruits and vegetables have the lowest carbon footprint among five categories while cheese, pork and poultry are in the second highest category. Yet when listing good examples of Cool Food Meals, Panera ironically includes its Chipotle Chicken Avocado Melt.

Panera is now just one of several food companies to call out the climate impact of food. In 2020, Chipotle launched its Real Foodprint tracker, giving customers detailed information about five metrics behind the chain’s ingredients, including how much water an order saves, how many antibiotics it avoided, how much organic land it supported, how much less carbon it put into the atmosphere, and how much it improved soil health.

Also in 2020, Just Salad launched its Climatarian Menu, with “climatarian eating” defined as choosing foods with planetary health as well as an individuals’ personal wellness in mind. “A climatarian eater might decide between two salads that both look appetizing by choosing the one with the lower carbon footprint,” says Sandra Noonan, chief sustainability officer with Just Salad.

Climate was, of course, a driving force behind the introduction of this menu, thanks in part to a survey from the Yale Program on Climate Change Communication. According to that survey, although two-thirds of Americans feel a personal responsibility to help reduce global warming, 51 percent feel helpless to do anything about it. “Yet food is a lever that’s available to use daily,” Noonan says. In fact, Just Salad’s research showed that by halving annual consumption of animal-based products, Americans would reduce diet-related greenhouse gas emissions by approximately 35 percent and move this country 25 percent closer to its targets under the Paris Climate Agreement.

But that doesn’t mean animal welfare didn’t factor in – “animal welfare certainly comes into this,” Noonan says, pointing to Just Salad’s other initiatives. In 2019, the chain replaced grass-fed beef with plant-based Beyond Beef meatballs, and in 2020, it introduced Daring plant-based chicken to its menu. Both are featured on the Climatarian menu.

Even food manufacturers are jumping into climate labeling. Take, for instance, Huel, a global food brand that sells vegan powders, bars and meals, which has pledged to put carbon emissions on its packaging by the end of 2021 while 80 percent of Quorn’s products in the United Kingdom now come with climate information about its products, something it hopes to have on all packages by the end of 2021. As of press time, there were no plans to do the same for its U.S. products.

Do climate labels really have the power to shift people away from animal products?

That, of course, is the million-dollar question, especially given that a new survey from Michigan State University indicates a disconnect between climate change and food. Only 44 percent of participants knew that eating more plant-based foods could have a significant impact on greenhouse gas emissions. But do they really want to know about the climate impact of their food choices, and if they did know, would that change their habits?

Researchers in Sweden put those two questions to the test, asking 803 individuals to answer questions online about their food-related habits and choices. While animal welfare wasn’t a separate category, it was factored into questions about organic food labels. Previous research had told them that knowledge about the climate impact from different food products among consumers was low. “They often underestimate the climate impact from meat compared to vegetable-based products,” says Anna Kristina Edenbrandt, Ph.D., researcher and study co-author at the Swedish University of Agricultural Sciences in Uppsala, Sweden.

The results, which were published in Food Policy, were hopeful. The majority of study participants either wanted the knowledge or at least weren’t against it, and after individuals who wanted the information digested it, their willingness to pay for meat substitutes increased. Meanwhile, although about a third preferred not to get this information, these information-decliners actually did change their consumption choices, moving from beef to pork and chicken.

And while climate labels are still so new that long-term data doesn’t yet exist to understand their full impact, early data from some of the restaurants shows positive changes. For instance, after Just Salad introduced its Climatarian menu, sales of those items increased significantly. Just Salad is currently analyzing the longer-term impact of the Climatarian menu.

Calculating your climate impact at home

The conversation about climate impact on food doesn’t have to end when consumers are eating at home, and a new online tool is poised to help individuals make more informed decisions about the foods they eat.

Compassion in World Farming (CIWF) released the Evaluate Your Plate calculator in April to show how food choices affect the earth, and it goes beyond greenhouse gasses. “One of the worrisome trends is organizations that will say they support plant-based diets focusing exclusively on greenhouse gas emissions but telling consumers that switching from beef to chicken or fish is the best thing for the environment,” says Jeff Doyle, U.S. Head of Food Business at CIWF, adding that this message has devastating consequences for the environment, not to mention the animals. “Yet we wanted to use scientific data to reinforce the fact that the lower footprint option will be plant-based and that even small changes daily or weekly can have a big impact.” The calculator also accounts for land and water use, nutrient pollution, biodiversity loss, and impact on animals.

Through the calculator, individuals can compare the impact of common dishes, even answer questions about their diet. That generates an eco-impact report card across these six sustainability measures and creates a Planet Weight score. The results also show recipes that are more climate-friendly in nature.

Five of the metrics were identified in 2019 by the EAT-Lancet Commission, which recommended reducing intake of less healthy foods like red meat (and sugar) by more than 50 percent. CIWF added the animal impact. “A shift away from cows is only part of the story,” Doyle says. “We also want to evaluate what these systems mean for animals and find a balance where there are fewer animals in the system and those animals remaining in the system have higher welfare standards than they do now.”

Although CIWF launched this for the general public, it’s currently talking with food companies about using this data to benchmark and hit sustainability targets – and in the end, transition their business to more plant-based foods. “This will mean a better world for animals in the food system because right now, nobody’s celebrating the system we have,” he says.

The proof is in the pudding, as they say. But if the success of calorie counts on menus can serve as an example, climate labels stand a good chance of shifting people from beef to beans, pigs to peas and chickens to chickpeas.