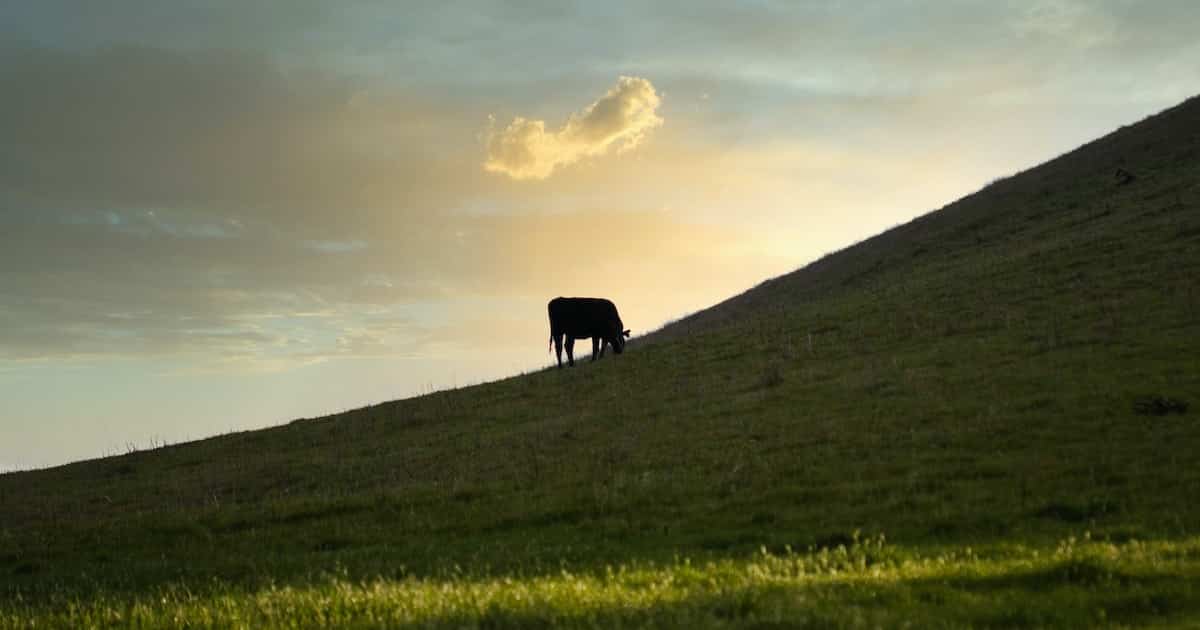 “When you have cattle grazing on these grassland landscapes, it really encourages plant and soil biodiversity,” says cattle rancher Ross Macdonald, as he wanders through a bucolic landscape in central Canada. “See that soil is alive,” he adds as dirt falls through his fingers.

“The cattle and the ecosystem coexist,” echoes fellow rancher Lieschen Beretta, standing in a lush field in Ontario, “and they actually need each other.”

No, this is not a conversation from a webinar on regenerative agriculture or from a conference on climate change. It’s from a new advertising campaign by Canadian fast-food company A&W for their new grass-fed beef burgers. The ad, one of five, runs frequently on national TV, compelling consumers to believe that the once-vilified cow is now needed for the health of the planet and that their consumption of grass-fed beef is somehow part of the fight against climate change.

But Dr. Jason Hannan, Associate Professor at the University of Winnipeg and editor of the recently published book, Meatsplaining, sees fundamental flaws in the way A&W is appealing to consumers. He explains, “The idea that the land needs the cattle is not just pseudo-scientific bunkum. It feeds the dangerous fantasy that by eating beef you’re somehow helping the environment when that’s the complete opposite of reality.” This is a prime example of what he describes in his book as “magical thinking, the full-blown promise of ecological and humanitarian salvation,” perpetuated by the likes of Alan Savory and his mega-popular TED talk, “How to Green the World’s Deserts and Reverse Climate Change,” and more recently, the Kiss The Ground documentary released on Netflix. “It’s this idolatry of the cow,” says Hannan, and the animals’ supposed power to draw carbon into the ground and bring dying dirt back to life that poses a whole new threat to the climate.

In fact, the latest research into the effects of cattle grazing on the environment says that cows are not a silver bullet in the fight against climate change. Studies by researchers at Oxford University and Harvard University show that grass-fed beef actually produces higher emissions than conventional beef production. And the prospect of changing over conventionally farmed beef to pasture-raised in the U.S., without lowering consumption, would require up to 270 percent more land, meaning even greater deforestation.

So how did we get to this point? Why is grass-fed beef condemned by leading climate scientists, while at the same time, it’s branded as “sustainable” by fast food companies and used as a marketing tool? “Big Meat,” as Hannan calls the animal agriculture industry, is the ever-clever puppet master, and the meat-eating consumer, the ever-willing sucker.

Following the Second World War, eating beef was seen as a sign of prosperity. Since the 1970s, however, consumption of red meat has continued to drop across North America, due to increasing concerns over its link to various health conditions. Enter grass-fed beef: the less fattening and supposedly healthier option.

Over time though, says Dena Jones, director of the Farm Animal Program at the Animal Welfare Institute, interest in grass-fed beef has changed. “I think it started off with people thinking it was [nutritionally] better, and then it transitioned into [demand for products that are] more natural, more organic,” she says. By about 2010, organic food had become a top consumer trend in the West, driven by demand for products that were healthier for humans and better for the planet. And now that has segued, says Jones, into what we are seeing today: more and more consumers concerned strictly with the impact of food production on the climate. This shift has not been good for the beef industry.

Conventional beef production has been widely called out in recent years as a major contributor to greenhouse gas emissions, deforestation, and other factors compounding climate change. As a result, Big Meat has had to come up with a new way to hawk its wares. “They recognize that they have a very severe PR crisis,” says Hannan. “They see the trends. They see that people are calling for consuming less meat, especially red meat, especially beef, or abandoning it altogether. They see the popularity of people like Greta Thunberg, and the growing popularity of plant-based options.” He says Big Meat’s response has been grass-fed beef, reinvented once again.

“It was only recently that the grass-fed beef movement came up with the idea that ‘We’re the solution to our current climate crisis,’ and Big Meat saw this as their answer,” says Hannan. “Big Meat could essentially keep doing what they were doing, but just re-jig the production model somewhat, at a really negligible cost, and the result would be they would be able to sustain their industry, and more importantly that they could completely revamp their image.”

Grass-fed beef production is often marketed as small-scale with wholesome images of family farms and small herds. But in most North American supermarkets, grass-fed beef is sold by some of the largest, most environmentally destructive meat producers on the planet, including Perdue, Hormel, and JBS. What are these multinational companies are trying to convey to the rapidly growing sector of eco-conscious consumers? “Now we too are partners in the solution to climate change,” says Hannan. And people are eating it up.

“We like having our cake and eating it too,” explains Hannan, “and that’s what the animal agriculture industry promises, that you can go ahead and continue eating what you were eating before”—as much as before—“and you can feel good about it because this way you’re going to be part of the solution.”

There is even more to the A&W advertising campaign that should concern consumers, Hannan adds. First, the campaign glorifies cattle ranching while erasing the colonial history of farming on stolen Indigenous land. Second, focusing on grazing techniques conveniently bypasses the rest of the production process, namely slaughter.  These smoke and mirrors tactics are used by Big Meat marketers to dupe consumers into choosing the more “sustainable” option every day.

A&W’s grass-fed beef campaign is just one small cog in the massive machine of deception used to sell products that are harmful to humans, animals, and the planet. “The industry has concocted a very powerful and insidious myth,” says Hannan, “that tells people what they want to believe.”