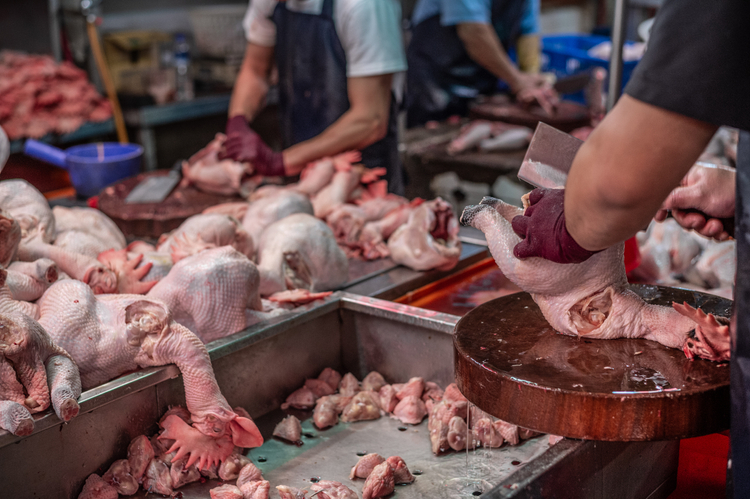 As people around the world struggle to make sense of the novel coronavirus pandemic, the answer to prevent future pandemics seems clear to some: In order to avoid future zoonotic diseases from happening, we must stop the breeding, raising, and consumption of animals.

It’s a hard pill to swallow as it is a solution that challenges habits, traditions, cultures, religious dogmas, and, most challenging for many, desires. Eating meat and consuming animal products is something that is so ingrained in society and people’s habits that they don’t even consider it to be a problem… not for them, the animals, the environment, or public health issues.

So how do we show people that the root cause of the current pandemic is the human consumption of animals?

One major issue that keeps the majority of people from understanding the severe threat of zoonotic diseases is that the novel coronavirus likely came from animals that people in the west don’t eat. It’s easier for them to blame the “exotic” food trade and “different” cultures consuming “weird” foods. But that doesn’t hold up. There have been other devastating global pandemics that originated in poultry and pigs, animals that are typically consumed around the world and far from “exotic.” H1N1, SARS, and avian influenza are just some of the zoonotic diseases that have taken the world by storm, fueled by humanity’s desire to eat animals.

But those pandemics didn’t cause people to question the relationship between what’s on their plates and how their choices have impacts on the world. News reports didn’t flood televisions and newspapers talking about how cutting meat from one’s diet is the answer. And more likely than not, we won’t see that same kind of reporting or widespread advice during the novel coronavirus pandemic or even after the outbreak(s) have subsided.

It’s hard to imagine a situation where people will just get it and realize that their habits at the dinner table have impacts and possible repercussions that go far beyond animal rights, personal health, or environmental issues. Even if this pandemic continues for years to come and social distancing changes how society functions and how we interact when it comes to professional, educational, and social settings, it’s far-fetched to think this will ever turn the world plant-based or drive up the numbers of people on a plant-based diet in an even noticeable way.

The link between many of these pandemics is clear: if humans weren’t raising, confining, and slaughtering animals for food, these viruses wouldn’t have the opportunity to evolve to the point of being able to transfer from non-human animal hosts to human hosts. These environments are breeding grounds for viruses as the animals on factory farms, slaughterhouses, and wet markets are densely populated, living conditions are woefully unsanitary, and the unnatural conditions and diets of the animals leave them weak and unhealthy.

So how do we stop pandemics like COVID-19 from happening? How do we get a world that loves to eat animals to stop eating them when decades of activism along with centuries of global pandemics brought about by zoonotic diseases hasn’t even remotely curbed the human consumption of animals? In fact, meat consumption is at an all-time high.

In order to end factory farming, slaughterhouses, and wet markets without unrealistically thinking that people will stop eating meat, we need to revolutionize the way people consume animals and the food system behind its production. This is why advances in plant-based meats and cultivated meats are so important to the future of our food system and the health and wellbeing of the planet, its people, and the animals that call it home.

According to Liz Specht of the Good Food Institute, “both plant-based and cultivated meat products remove the food insecurity and zoonotic disease concerns inherent in animal-based food. Modern plant-based and cultivated meat production gives consumers a painless swap at the dinner table, along with massive underlying benefits in safety and sustainability throughout the supply chain.”

Now is the time we need to embrace plant-based and cultivated meats as they provide the best and most immediate solutions to a wide variety of challenges that we face today. Cultivated meat gives meat-eaters the possibility to eat meat without having to raise billions of animals on factory farms or kill them in slaughterhouses. From an animal welfare standpoint, cultivated meat can eventually save trillions of animals per year once its production scales globally. From a global health perspective, removing the animals from meat will do away with factory farms, slaughterhouses, wet markets, and other unsanitary hellscapes that are breeding grounds for viruses and misery. And from an environmental perspective, doing away with animal agriculture as it is today will drastically decrease its carbon footprint by saving land use for more sustainable crops and decreasing deforestation that runs rampant for cattle grazing and soy production to feed livestock.

Beyond these benefits, people will still be able to carry on with habits and traditions that they aren’t willing to break. Not everyone is willing to make drastic changes, even if the changes technically align with their beliefs (whether they know it or not). And while some people are willing to go plant-based because of the many benefits, most people are not. So the more money, technology, and resources that are invested in plant-based and cultivated meats, the sooner these new products can be created at scale and at competitive prices. When a Beyond Burger costs less than a beef burger and when a cultivated chicken breast costs less than a factory-farmed chicken breast, public opinion will shift and people will start voting with their dollars. Low costs and convenience drives choices more than origins and even taste. If people are able to get the exact same product they are used to but for cheaper and without having to give up meat, the need for factory farms and slaughterhouses will start to vanish. Meat industry giant Tyson Foods is entering the plant-based meat space and Perdue is starting to reduce the amount of meat in their products by mixing in plant-based proteins.

We are still early on in this newest pandemic (while at the same time African Swine Fever is breaking out across Poland and Germany and has killed 40%+ of the pigs in China) but that doesn’t mean we have to wait to have these important conversations. If we are serious about avoiding other pandemics in the future, we need to start building a system that isn’t prone to these issues in the first place. Addressing the problem and attacking the source is the best way to move forward if we want to see actual change. The food system is unsustainable and utterly broken. Instead of continuously cleaning up messes only after they appear, let’s focus on addressing the source and fixing the problem that leads to these messes in the first place. And with plant-based and cultivated meats, we can do this in a way that won’t force people to change their habits or desires. All we need to do is change the system.