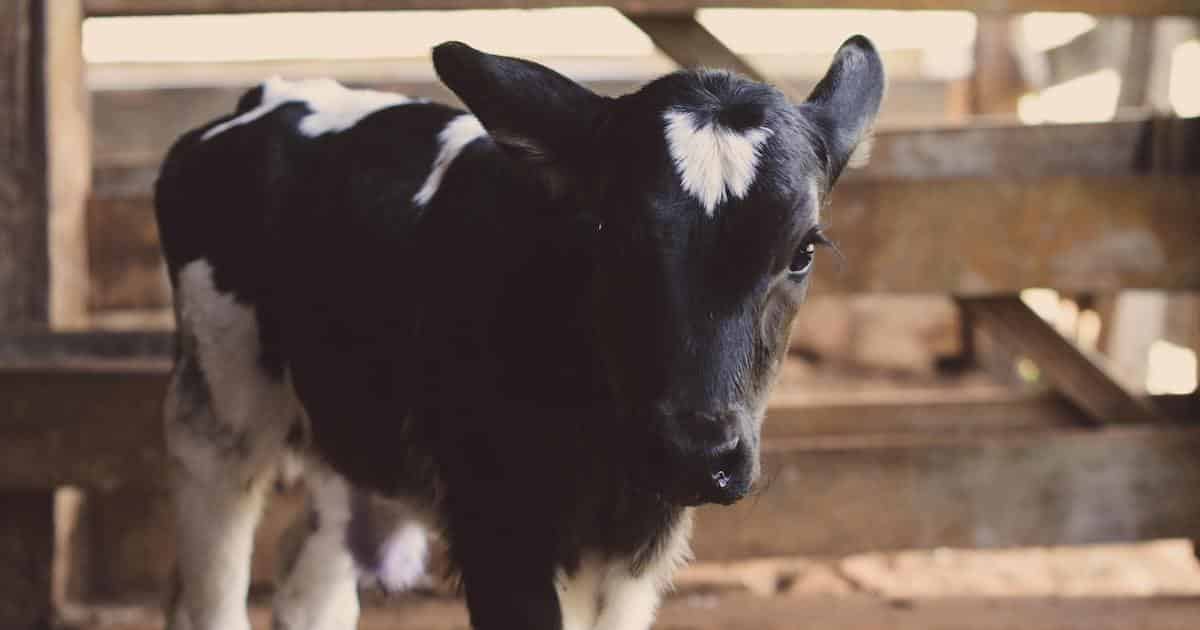 I have long thought that creating ethical dairy is possible. The image of blissful cows, lowing in the meadow whilst an apologetic farmer hand-milks them into a pail; it may be as rare as rubies, but I thought such a place must exist. Anyone with a superficial understanding of the modern dairy industry, with its constant separations of calves and mothers, its slaughtering thousands of cows for veal, or its rampant pollution knows the system we have is nothing like this. Yet I believed that a method of agriculture where older cows live out their pensions unmolested, and no calf is stolen from its mother or faces the slaughterer’s knife for being the wrong sex, could be realizable.

The Ahimsa Dairy Foundation is the only dairy producer in the UK that does not slaughter cattle. In a country of over 9.3 million cattle, a handful of cows under the stewardship of a single non-profit are the only ones not to finish their lives at the end of a bolt-gun. At Ahimsa Dairy the cows who can no longer produce milk live out their retirements; males are used to work the land as oxen. Calves drink their mother’s milk and do not endure forced separation and cows are naturally inseminated by a bull. It is a closed farm system, where the animals help with the labor and production of dairy but live a generous and active life outdoors.

This was all elucidated to me by Darryl Biggs, assistant director of the Ahimsa Dairy Foundation, over Zoom. Acutely aware of the horrendous treatment of cattle in industrial dairy farms, Biggs sells Ahimsa Dairy as an animal rights project as much as anything else, which seeks to “bring to attention how cows are mistreated” and aims at “educating the public about what happens in the dairy industry.”

When discussing industrial dairy Biggs doesn’t pull his punches. He illustrates the callous, bottom-line approach of Big Dairy with considerable vim: cows are “treated just like machines for giving milk—it’s completely barbaric and inhumane.” Although Ahimsa Dairy has plans to expand and to put four thousand acres of farmland across the country onto an ahimsa zero-slaughter welfare standard, Biggs maintains that it will be nothing like industrial dairies. They will focus on setting up nano dairies (1-2 cows) and micro dairies (up to 8 cows) on zero-slaughter, free-range, organic terms. If any of these dairies fail, the cows can return to the herd on Ahimsa’s main farm in Rutland. As a model for a country, if viable, this seems like an enormously positive step.

The environmental impact of dairy had also been considered. First of all, Ahimsa Dairy argues that their model would involve far fewer cattle, due to the change from dairy from a staple to a luxury good, and therefore far fewer emissions. At £4.50 ($6.29) a liter the milk is the most expensive in the country, but reflects the true price of the product, with money going towards the cow’s retirement and without supermarkets using it as a loss leader. Biggs says his organization has a commitment to “deep ecology” and details an innovative project they are involved in with King’s College London, whereby they are placing their cattle dung into a bio-digester that generates electricity for the farm. The dairy industry is at present a gigantic polluter, creating more emissions than the shipping and aviation industries combined, and technological solutions like this are full of promise. Ahimsa Dairy hopes to make their farm carbon neutral and even carbon negative.

Yet unfortunately, my conversation with Biggs hit a snag. I was impressed with how well-considered, how compassionate and ecologically minded everything he had said was. Yet when questioning the specifics of some of their animal welfare practices I ran into a surprising discovery. They practice no disbudding, due to its controversial nature, yet they still castrate their bulls—without anesthetic.

I appreciate the necessity of castration in a farming situation. You can end up with worse welfare outcomes if there are numerous bulls, livid with testosterone, in a single given field. But without anesthetic? Biggs assured me the procedure was carried out by a trained cowherd and a vet “in the most humane way we possibly can.” I take leave to doubt this. I have plumbed the depths and heights of my imagination to envisage a way of cutting off a creature’s balls without anesthetic which is more humane than the alternative. I cannot see it. No matter how elaborate the vice, how impressive the gizmo, or how sharp the scalpel, severing an animals’ testicles without pain relief and whilst it is conscious falls far short of the word ‘ahimsa’.

This does not undermine the fact that Ahimsa Dairy is by far and away the most ethical milk producers in the country. Nor does it change the fact it is evidently run by good people who are horrified by the bloodbath of factory farming and its noxious effect on already threatened ecologies. I am also aware of my possible naivety; perhaps a dairy-free world is a pure pipe-dream and radically reforming the system is the best path to progress. One must always choose their battles, and I will happily call Ahimsa Dairy an ally.

Yet still, this revelation puts the image of the truly serene and pacific dairy farm a little further from reach. Factory farmers make lavish sacrifices on the altar of animal suffering, whereas Ahimsa Dairy lays down a tiny votive. If I must drink milk and eat cheese, there would be no hesitation in whose product I’d choose. However, in reality, the door is open, and we are free to leave the temple.