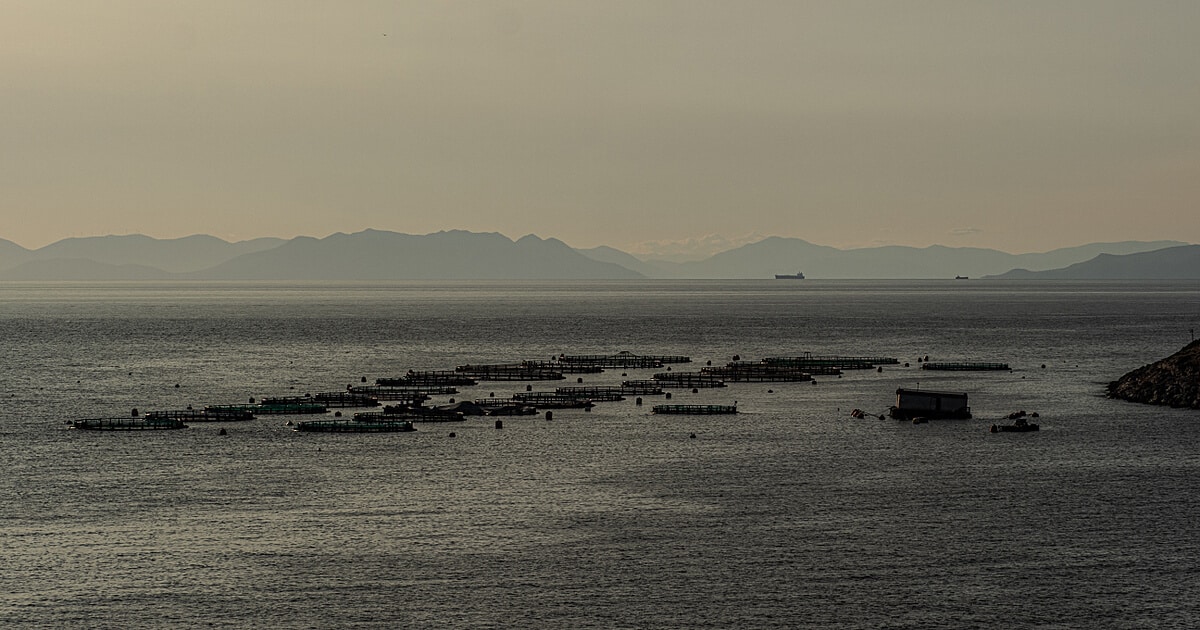 Investigators Followed a Livestock Truck for 32 Hours. Here’s What They Found.

While fish farming has been promoted as an environmentally sustainable alternative to wild-caught fish and other forms of animal agriculture, the industry was not founded on principles of conservation. This tension has resulted in some people thinking that fish farming is inherently sustainable, while others question whether fish farming should even exist.

Industrial fish farming is a response to both overfishing and to the resistance of fish to being captured. Its goal is to make money by making food. There are a variety of reasons why advocates for the environment, sustainability, and animals worry about fish farming and its impacts on fish, ecosystems, and other living beings.

What Is Fish Farming?

Fish farming is the raising of fish in enclosed waters. The fish are then sold to be killed and turned into food for humans or other farmed animals. The fish can be confined in the ocean or fresh bodies of water. Fish can also be confined on land in above-ground pools.

Industrial fish farming is an intensive form of farming. It’s been referred to by animal advocates as “underwater factory farming” or the “factory farms of the sea.” From breeding to birth, growing up and death, the details of an individual fish’s life are continuously managed in units of time, weight, and money.

What Are the Types of Fish Farms?

There are several ways to contain fish and raise them for human consumption. As Dinesh Wadiwel writes in “Do Fish Resist?” aquaculture is often described as an alternative to mechanically hunting free-living fish, which has led to overfishing and a scarcity of fish. Wadiwell writes that aquaculture can also be seen as a “technological response to fish resistance.”

In a cage system, rigid or flexible nets keep dense concentrations of fish together in open water. Imagine 50,000 salmon contained in a pen, in constant motion and swimming so quickly that it is hard for the human eye to track them individually.

Because the containers are permeable, fish farmers save the expense of waste disposal and getting fresh air to circulate into the enclosure, making cage systems less expensive and more popular than using fish tanks on land.

Freshwater fish farms are typically pond systems. Ponds can be natural or artificial and usually contain stagnant water. Tilapia and catfish are generally farmed in earthen ponds, and pond systems are also used to produce shrimp, mollusks, and aquatic plants. Fish are also sometimes raised in the irrigation ditches of crop farms.

The experience of fish in freshwater fish farms—and their impact on the environment—is underreported in academic studies outside of Asia’s longstanding and varied tradition of small, household-managed fish ponds. Yet subsistence fish farming is retreating in the face of rising demand for fish in national and international markets.

Composite fish culture means bringing together more than one species in a pond or reservoir so that their feeding practices complement each other. It is also called mixed farming or polyculture. It is “an old practice in India,” according to a how-to article by Sasmita Panda, in which “a group of fishes are selected, each having different feeding habits from others so that all the food available in the different zones of the pond is used profitably.”

For example, three types of Indian carps can be stocked in the same pond: one is a surface feeder that eats “zooplankton and detritus,” another is a bottom feeder, eating plants and animals at the bottom of the pond, and the third type of fish is a column feeder that eats “decayed vegetable matter” in the middle layer of the water.

Integrated recycling systems are also known as aquaponics, in which fish are kept inside greenhouses. The waste from the fish is channeled to fertilize the soil in the greenhouse, which filters the water for reuse in the tanks.

Fry are young fish. Classic fry farming is when fish eggs are incubated in hatcheries and raised until they are able to survive on their own, living freely in nature. The fish are released into open water. As adults, they are caught by fisheries or for sport.

Why Is Fish Farming Bad?

The term “fish farming” focuses the listener or reader on the place where the fish are treated as items to be sold, but animal advocates have revealed aspects of the industry that often go unseen: the violence in ocean fishing that occurs in order to feed farmed fish and the suffering that the fish must endure in aquafarms.

Before farmed fish are taken from their enclosures to be transported and slaughtered, they are often starved for several days or weeks so that their digestive systems will be emptier, making them less aggressive, and lowering the rate of their metabolism.

When they are transported, they are pulled out of the water to endure long journeys of up to 30 hours in crowded nets. According to the Let Fish Live website, “Entire shipments of fishes transported in boats have died.”

Lack of Space and Crowded Conditions

Picture a “foot-long trout,” writes David Simon in “Meatonomics.” Place that trout in a bathtub with 26 of their peers around the clock and with no reprieve. The density in which fish are held, particularly in cages in the open sea, causes fish to fight with each other and injure themselves, or rub against surfaces that damage their fins.

The way farmed fish are crowded together means that their waste is highly concentrated. Waste from farmed fish coats the seafloor, “smothering plants and animals,” writes Ian Urbina for the New Yorker. This excessive fertilizer leads to algal growth that uses up the oxygen in the water and makes it harder for other organisms to live there, in a process known as eutrophication.

One of the reasons why people like to eat fish is to get omega-3 fatty acids for heart health. However, farmed tilapia are fed unnatural food pellets made of corn and grain, and researchers have found this increases one’s risk of getting heart disease due to “detrimental” levels of omega-6 fatty acids, according to David Simon in “Meatonomics.”

A less-direct impact on human health, that few people know about, is that fish farms producing “some of the popular seafood, such as carp, salmon, or European sea bass, actually consume more fish than they ship to supermarkets and restaurants,” writes Ian Urbina. Urbina reports that wastewater flowing from fish processing plants along the coast of the Gambia, which produces fish meal to feed the world’s farmed fish, was giving swimmers rashes and killing marine life along the shore.

Fish farms and the factories that make fishmeal for them have been harmful to the economies of coastline communities in the global south, like the Gambia, while bringing benefits to fish consumers in countries in the global north, like the United States. In Gunjur, in the Gambia, industrial fishers supplying fish meal plants for farmed fish have decimated the indigenous bonga fish, a species once “so plentiful that they were sometimes given away for free.” Bonga has become too expensive to eat, putting local, subsistence fishers out of business, and further depressing the local economy. Half of the Gambia’s people live in poverty.

Is Farmed Fish Bad for the Environment?

As the aim of industrial fish farming is increased profit, and not environmental health, advocates for ecosystems and animals have been keen to point out how fish farming harms the environment.

The crowded nature of intensive fish farms contributes to disease outbreaks among the farmed fish as well as transmitting diseases to the fish living freely in the same waters. Wild fish living near fish farms were “16 times more likely to carry disease and parasites,” according to a Fish Welfare Initiative report.

Escapes from the fish pens into the open waters of the ocean means that farmed fish, who are often selectively bred or genetically modified, threaten indigenous ecosystems. Escapees from fish farms, where pathogens develop readily, are also one mechanism whereby those pathogens spread to wild populations and even different species.

Pollution from fish farms can be direct and indirect. David Simon writes in “Meatonomics” that in Scotland “the fish farm industry created as much waste-based nitrogen as did two-thirds of the country’s human population of 5 million” in the year 2000. This type of waste kills marine life beneath the farms. In Gunjur, Gambia, Ian Urbina reports how the “stench of rotten fish” from the fish meal plant polluted the air. It made residents burn incense and candles, and led him to throw away his clothes before leaving the city, while most tourists don masks.

Pesticides are chemicals that kill pests in farms and gardens. In the fish farms for salmon, a major pest is the sea louse (plural sea lice). The way that salmon are packed into small spaces in fish farms makes them the perfect place for sea lice populations to explode in numbers. The toxins from the chemicals that farmers use to kill the sea lice harm not only the tiny creatures themselves but also the surrounding ecosystem. David Simon writes that cypermethrin, one such pesticide, kills “nontarget marine invertebrates” up to half a mile from the target site, and “persists in the water for hours.”

Is Farmed Fish or Wild Fish Better for the Environment?

People who study fish farming can point to aspects of it that are better for the environment than industrial fishing, but both farmed fish and wild fish face serious harm from fish farms. The more farmed fish we eat, the more efficient the process for farming fish becomes. One very real danger is that this efficiency will lead to an increase in demand for fish across the board, contributing also to the depletion of free-living fish and their surrounding communities.

Fish and other animal advocates are making visible some of the less publicized aspects of seafood dining in Europe, Asia, and the U.S.—from the fish meal plants that ruin the quality of life and local economies in the global south to the suffering that fish endure in crowded nets and their surrounding ecosystems. There are significant environmental harms to consider when evaluating fish farming as a sustainable venture, raising the question of what other ways forward the industry can take to improve its relationship with the earth and its people.