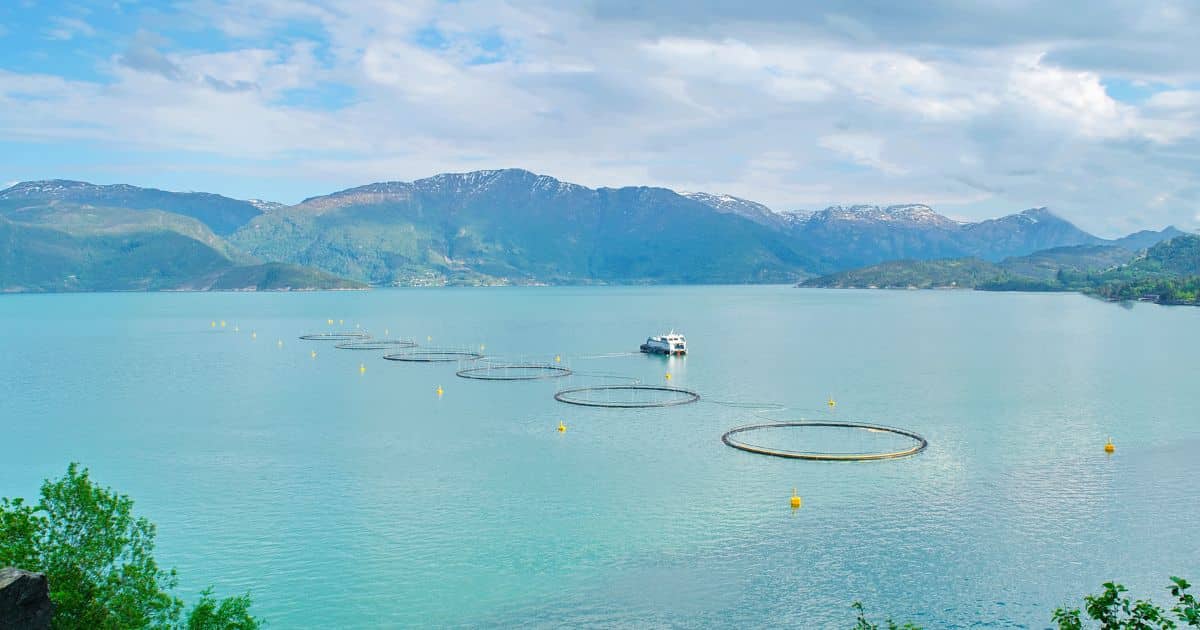 Factory farms are not limited to land animals like cows or pigs. One of the most commonly farmed species today is salmon, often in intensive operations. Since the 1960s in fact, salmon farming has risen in popularity — today it produces 70 percent of the world’s salmon. Intensive fish farms raise large numbers of salmon in tightly confined spaces, which has consequences not just for the fish, but also for human health and the environment.

What Is Farmed Salmon?

The salmon you find at the market or on restaurant menus has either been wild caught or farm raised, with the majority of salmon on the market today produced by the salmon farming industry.

The salmon farming process requires the breeding, raising and slaughter of genuine species of salmon — primarily Atlantic salmon, rainbow trout, chinook salmon and coho salmon. Of the salmon farmed around the world today, 90 percent are Atlantic salmon. Farmed salmon are often the same species as wild-caught salmon, but these fish come with a very different environmental impact.

How Is Salmon Farm Raised?

The production of farmed salmon takes one to three years, beginning with fish held in small land-based tanks as they pass through their juvenile phase in freshwater. After 6 to 12 months the fish are typically transported to underwater nets or cages in the ocean to live the rest of their lives. Other salmon are raised entirely in land-based tanks.

Underwater cages measure up to 100 meters in diameter and can be used to hold up to 200,000 fish at any one time. While wild salmon are naturally very active and can cover distances of thousands of miles, farmed salmon are confined and crammed into cages, with little space to swim and little opportunity to express their natural behaviors. The cramped conditions of these underwater cages also allow disease to spread, affecting the welfare of the fish and contributing to their ecological impact.

Once the salmon reach what is considered to be a suitable “market weight,” they are prepared for harvest. The fish are first starved for a week to empty their digestive system, and then slaughtered. The slaughter of fish is largely unregulated in terms of the animals’ welfare.

Along with other species of fish, salmon are produced in such large quantities that they are not numbered as individuals. In 2019, for example, 2.54 million tonnes of salmonids were produced by the aquaculture industry, but records do not include the number of individual fish killed.

How Can You Tell if Salmon Is Farmed or Wild?

Rules in both the E.U. and the U.S. require fish to be labeled as either farmed or wild caught. If you’re buying salmon, you’re most likely buying farmed salmon. The majority of salmon sold to consumers today originates from the aquaculture industry, with only a small percentage caught from wild fisheries. When the two types are compared side by side, there are visible differences between them too, including their color and fat content. Wild salmon is also usually more expensive than farmed salmon.

The life of a farmed fish begins in a tank or similarly controlled system. After 12 to18 months they are transported to an underwater cage, tank or pen. Farmed fish thus live their whole lives in a confined environment, at a greater risk of developing diseases than wild-caught fish. They are slaughtered for food before they reach three years old.

By contrast, the life of a wild salmon begins naturally, and they have the opportunity to express natural behaviors, eat a natural diet and have overall better welfare. But although they live a more enriching life they still may be caught and end up slaughtered for food production.

The most visible difference between farmed salmon and wild caught salmon is in their color. Wild salmon have a reddish-orange color because of the carotenoids found in their natural diet. Because farmed salmon aren’t fed the crustaceans and algae that their wild counterparts consume, they are naturally a much paler color. To get around this, producers feed their fish food with added carotenoids in an attempt to make farmed salmon look more like wild salmon.

Intensively raising salmon in confined environments has a negative impact not only on the animal’s welfare, but also on the environment and potentially on human health. Salmon farming has been found responsible for disease spread and releasing harmful contaminants into surrounding ecosystems.

Just as with other large-scale farming operations, large numbers of animals in a confined environment is a precursor to the rapid spread of disease. Viral and bacterial pathogens can spread easily within populations. The use of antibiotics in salmon farming to prevent and cure disease in turn contributes to the growing threat of antimicrobial resistance.

The dense populations that these salmon are kept in means that when a net is damaged or a technical error occurs, thousands of fish can escape. In just one incident, for example, 300,000 Atlantic salmon escaped from a farming operation in Washington state. Salmon that escape from their underwater cages pose a threat to their wild counterparts, as they can spread viruses and breed with wild fish to the detriment of the natural ecosystem. Farmed salmon are genetically selected for fast growth and early maturity, and they pass these traits to their offspring when they breed with wild salmon. This has serious implications for the future of wild populations, as it limits the ability of these fish to survive in their natural environment.

Pollution from salmon farms is emitted through chemical treatments given to the fish, excess feed and large quantities of feces. These pollutants move towards the ocean floor, where they break down, reducing the concentration of oxygen and reducing biodiversity in these habitats. From 2019 to 2020 pollution from Scottish salmon farms increased dramatically, partly because fish were kept in the water longer as the COVID-19 pandemic disrupted production.

As stocking densities of fish increase, so do sea lice populations. Sea lice are parasites that attach themselves to the fish, feed off them and leave behind wounds. These wounds often become infected, resulting in the death of the fish. Harmful chemicals such as hydrogen peroxide are often used to rid salmon farms of sea lice. Although this practice is effective in removing the sea lice from the salmon, when the chemical is released into the ocean it has serious consequences for surrounding marine life.

Salmon farming on the whole is not sustainable, largely due to its impact on wild fish populations. Farmed salmon are often fed smaller, wild-caught fish and fishmeal, which has led to overfishing of these species, including sardines.

An increase in premature fish mortality rates also raises questions around the sustainability of the salmon farming industry. For example, between 2002 and 2019, Scottish salmon farms saw fish mortality increase by over 400 percent, with more than 1 in 8 salmon dying before slaughter. These losses were mainly caused by sea lice infestations.

Is Farm-Raised Salmon Bad For You?

Many studies have compared the health benefits and implications of farmed and wild-caught salmon, with conflicting results. Farm-raised salmon contains a higher quantity of fat and more calories than wild-caught salmon.

Farmed salmon typically contain trace amounts of contaminants, including PCBs, dioxins and mercury. Both wild and farmed salmon have been found to contain mercury and PCBs, both in levels not likely to cause health risks, according to most health experts.

Salmon is a dietary source of omega-3 fatty acids, which are essential to the human body and can help reduce the risk of heart disease or stroke. Although salmon, both wild caught and farmed, are a good source of these fatty acids, there are plant-based alternatives including nuts, seeds, seaweed and brussels sprouts.

As in other forms of animal agriculture, antibiotics are used in the salmon farming industry to combat the spread of disease in confined environments where animals are packed together in close proximity. Antibiotic use on salmon farms tends to be less widespread than in land-based agriculture systems. Some countries, like Norway, have managed to lower the use of antibiotics in aquaculture significantly, while in other parts of the world like Chile, antibiotic use remains dangerously high.

Is Farm-Raised Salmon Bad for the Environment?

The salmon industry has touted farm-raised fish as a solution to overfishing, but because of its environmental impact, aquaculture may cause more problems than it solves. Salmon farming is harmful to the environment and surrounding marine life primarily because of its waste. The waste products of salmon farming include both feces and excess feed.

Although fish feces in general are vital for the ocean’s ecosystem, the high concentrations in which they are released from salmon farms are extremely harmful. When salmon feces and excess feed are released from farms into the ocean, they can cause a process known as eutrophication. The result is lowered oxygen levels and the development of toxic algal blooms. Many forms of marine life struggle to survive in such environments, affecting the biodiversity of the ocean floor and the ecosystem as a whole.

One lesser-known environmental impact of salmon farming is the disposal of unused fish. Millions of salmon raised by the aquaculture industry die prematurely due to disease or toxic chemicals in the water. In Scotland 45 percent of these unused fish end up in landfill or are burned.

What Happens to Your Body When You Eat Farmed Salmon?

A plant-rich diet that includes nuts and seeds offers the same nutritional benefits as salmon, without the animal welfare, health or environmental implications.

The 14 Best Vegan Sources of Omega-3