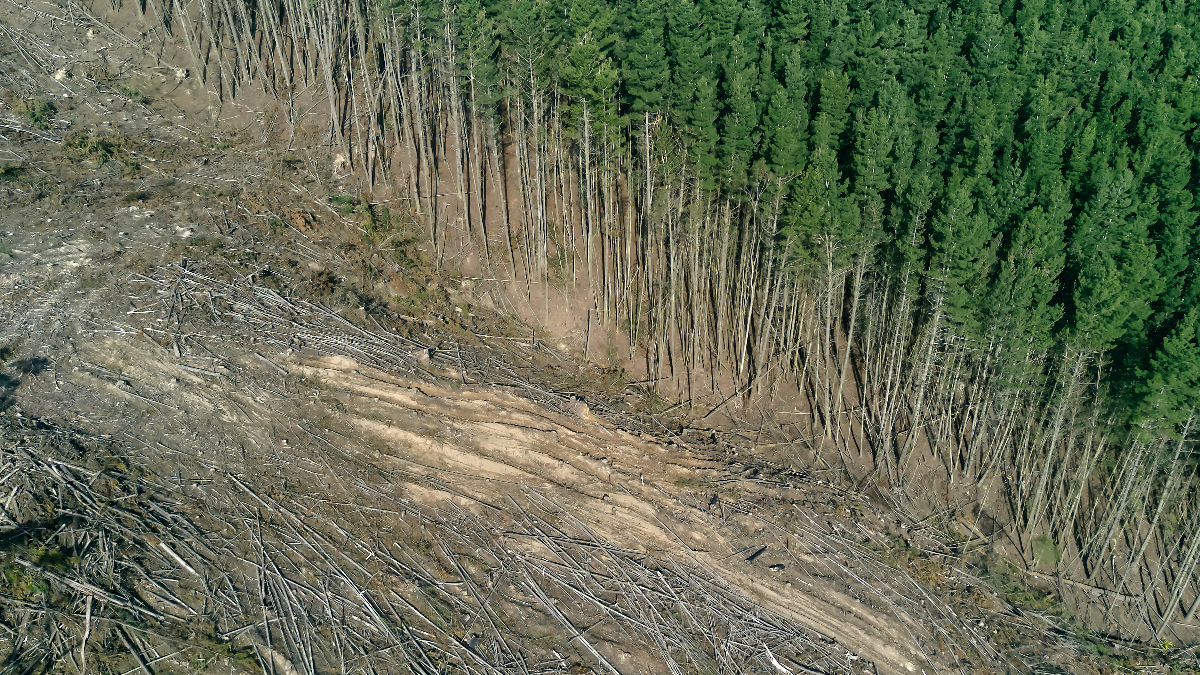 The Earth is not unfamiliar with change: volcanic eruptions, gouging glaciers, erosion by the sea and wind, earthquakes and shifting river paths are all ways that the land changes over time. Sometimes such changes occur suddenly, but usually they operate on the timescale of hundreds, thousands or even millions of years.

But the last few centuries of human history are a far cry from anything natural. Our presence on the Earth has changed the land in ways both predictable and completely unexpected. In order to heal the ecosystems that have been affected, we must first understand the depth of the problem.

What Is Land Use Change?

Land use change is a term that encompasses all the effects human beings have on land and associated ecosystems across the world. And we have quite the effect: according to a study published in Nature Communications in 2021, land use change has affected nearly 75 percent of Earth’s surface within the last millennium, and 32 percent since 1960.

What Are the Types of Land Use Change?

There are many types of human-caused land use change, including deforestation (removal of trees and other forest plants), afforestation (planting of trees), urbanization and rewilding. However, there exist many forms of land use change that don’t have a specific term, as the field has historically been fragmented. For example, the oscillation of a plot of land between prairie and cropland would count as land use change.

And while the majority of land use change is long-term, not all of it is. A farmer can clear grassland to grow corn but then, suffering losses, may rewild a few acres. These land use changes can be fluid, as land moves between human use and natural use.

What Is the Difference Between Land Use, Land Use Change and Forestry?

In environmental literature, these three terms are often grouped together, sometimes abbreviated as LULUCF, due to a designation by the UN. Each term has a slightly different, yet interconnected, meaning.

Land use simply describes human use of land. This is a broad category that includes agriculture, cities, industry, mining and infrastructure.

Land use change refers to the set of processes by which humans have shaped and continue to shape the land to fit our needs.

Forestry is the craft of managing and protecting forests, through interconnected methods of research, activism, governance and, of course, conservation.

Forestry is practiced as a science, as an industry and by individuals worldwide on scales both large and small, using methods both modern and ancient. For example, Indigenous peoples and local communities have managed and minimized deforestation on at least a quarter of Earth’s land with practices stretching back for centuries, while modern scientists have recently begun sequencing genomes of trees to ensure biodiversity.

What Causes Land Use Change?

There are many causes of land use change, with the leading causes often differing based on the region of the world. Urbanization is a major contributor. Recently, cities have become less compact, expanding via a form of urban sprawl that has detrimental effects on surrounding environments, particularly of Asian cities, although these issues exist worldwide. Mining is another culprit; although its total land use tends to be less than urban sprawl, its ability to reshape ecosystems by redistributing resources can be profoundly harmful.

However, agriculture is undoubtedly the largest cause of land use change, and now takes up approximately 40 percent of the Earth’s ice-free surface. Within this figure, animal agriculture is the biggest culprit due to its inherent inefficiency: Beef requires over 100 times as much land as plant-based staples like root vegetables, rice and corn.

How Does Land Use Change as the Human Population Increases?

Since land use change is primarily caused by human needs like food, housing and transportation, the increasing human population, which just reached 8 billion last month, invariably causes more land use change. By far the most damaging of humanity’s impacts on the land is its appetite. Scientists estimate that agriculture uses 60 times more land than urban and suburban areas combined.

However, it is incorrect, not to mention unethical, to argue that land use change necessitates population-curbing initiatives. The current population of Earth, 8 billion people, could be fed and housed with sustainable practices that minimize land use change. First and foremost, agriculture would need to be converted from primarily animal-based to plant-based, a move that researchers estimate would reduce our agricultural land from 4 billion hectares to just 1 billion, freeing up an area approximately the size of Brazil, the U.S., Canada and Mexico combined. Plant-based agriculture is also roughly 20 times more efficient, calorie-for-calorie and protein-for-protein, than its animal-based counterparts, so the human race would not need to sacrifice any health outcomes in this change. To the contrary, plant-based initiatives show promise in reducing world hunger.

Other modern initiatives like cell cultures and protein breweries could be very helpful, although more research is needed. As regards housing, it is important to stop urban sprawl by making sustained investments into communities instead of just haphazardly building more suburbs.

While population growth is an indirect cause of poor land use, human beings have the technology to manage the Earth more efficiently and sustainably, we just need to organize to make it happen.

Is Land Use Change Bad?

Land use change is a massive problem that is affecting every continent on Earth. While not every aspect of land use change is negative, like forest rewilding campaigns, humankind’s overall effect on the Earth is detrimental, to say the least.

What Are the Effects of Land Use Change?

How Does Changing Land Use Affect the Carbon Cycle?

The carbon cycle is a natural process in which carbon changes form over time through Earth’s atmosphere, land, ocean, plants, animals and other living organisms. In terms of climate change, it is important to consider carbon sinks, which trap more carbon than they emit, and carbon sources, which release more carbon than they trap.

The average person can likely name several human-caused carbon sources, such as the burning of fossil fuels by factories and planes, and the emissions of methane from cattle, and likely also understands that the increase of greenhouse gasses in the atmosphere is threatening the climate. But increasing carbon sinks can be just as critical as decreasing carbon sources. Land use change prevents some of Earth’s biggest carbon sinks, including forests, rainforests and soil, from trapping carbon, thus increasing the amount of carbon in the atmosphere.

Forests in particular absorb 2.6 billion tonnes of carbon dioxide every year, but not all forests are created equal. Rainforests, especially the Amazon, are critical carbon sinks that require protection. And mangrove forests in Southeast Asia can retain four times as much carbon as the Amazon, acre for acre.

When forests are razed, this sequestration is halted, effectively undermining the planet’s natural ability to balance the carbon cycle — and we can already see the effects. Land use change is responsible for 10 to 15 percent of the increase of carbon dioxide in the atmosphere and 40 percent of other heat-trapping gasses.

How Does Land Use Affect Climate Change?

Other Impacts of Land Use Change on the Environment

Biodiversity loss is a major problem. The loss of biodiversity differs from continent to continent and even ecosystem to ecosystem. The largest cause of species extinction is habitat loss, especially habitat loss created by human agriculture. Of the estimated 28,000 species currently at risk of extinction, 86 percent are on the brink due to agriculture, primarily animal agriculture.

Soil erosion is another negative consequence. Land use change is the biggest driver of soil erosion globally, harming the planet in more ways than one. Within forests, it’s not just the trees themselves that sequester carbon, but also the soil protected by their roots. This erosion can then become a carbon source.

Land use change is also linked to disease spread in animals, plants and humans. Many infectious diseases, from HIV to malaria and meningitis, are spread in part due to land use change and its effects like deforestation, irrigation and habitat loss. Animal agriculture also creates superbugs within animal populations, which can devastate both farmed and wild animals.

In order to minimize your diet’s effect on the environment, you can consider reducing or eliminating your meat intake, especially red meat. The science is clear that meat and animal products are the biggest contributors to land use from human activities globally.

You can also donate to rewilding efforts across the globe, like the Rainforest Alliance, Rewilding Europe or Mossy Earth. Consider donating to large-scale farmland transformation projects, like the Transfarmation Project, which make farm use more sustainable while also helping farmers find new pathways to preserve and grow their own livelihoods.