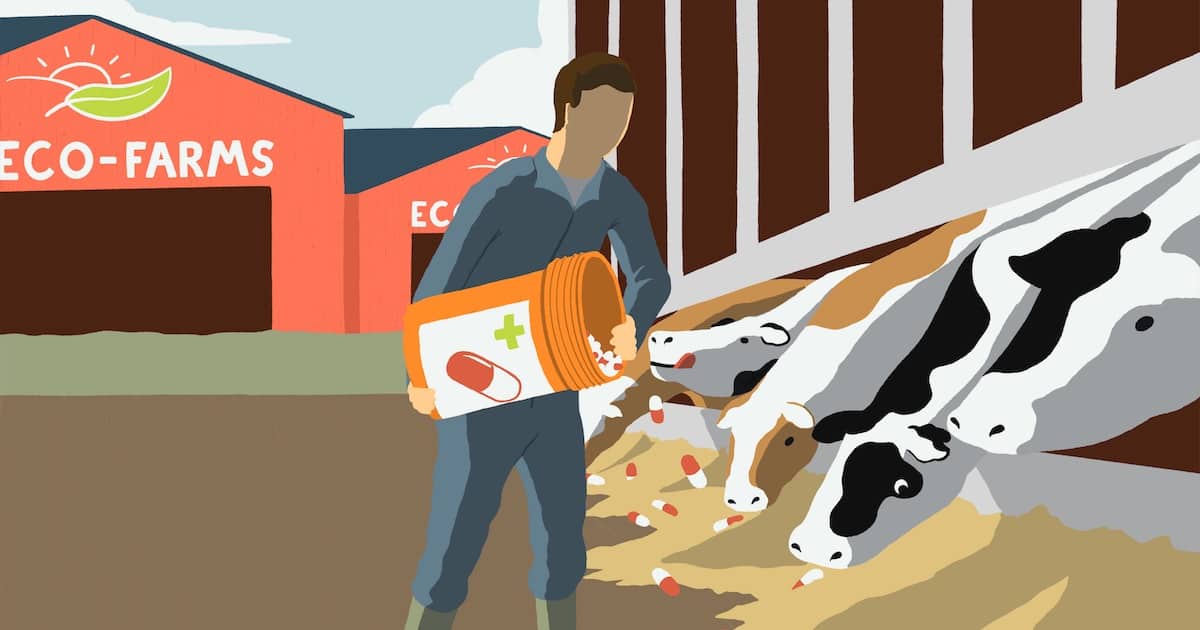 This story is part of a joint investigation led by DeSmog and Sentient Media.

An animal pharmaceutical representative body appears to have made a failed attempt to influence the United Nations by using what experts are calling distorted climate information to protect the livestock industry against calls to reduce food animal numbers and eat less animal protein, critics say.

As reporting by DeSmog and Sentient Media reveals, the group has been forced to remove an official UN logo from a briefing it produced as a lobbying tool ahead of a key UN food summit later this month. The briefing’s claims run counter to calls from scientists to reduce animal protein consumption to help tackle the climate crisis.

The animal pharmaceutical sector produces vaccines, antibiotics, and other medicines for food, clothing, and companion animals—although food animals are the biggest earner. HfA’s member turnover in 2020 totalled about $26 billion—more than half the sector’s global value. (The total excludes one HfA member because recent earnings data could not be confirmed.)

The briefing was written by HfA for this month’s United Nations Food Systems Summit (UNFSS), which aims to facilitate a shift toward more sustainable and equitable food consumption.

The HfA website says the briefing “provides a fact base for FSS stakeholders, helping them to make game-changing, science-based policy recommendations.” But critics say the document ignores a critical climate issue: the need to reduce livestock numbers and eat less animal protein.

Initially, the HfA document carried the UNFSS logo, potentially suggesting it was an official UN document, but the group was forced to remove it. HfA said it had removed the logo in March, two months after its initial release, and at least one copy with the logo lingered on the web until late August.

HfA initially told DeSmog and Sentient Media that the briefing had “been well-received by many policymakers, scientists and other stakeholders within FSS.” But when asked about it, the UN said it “was not taken on board.” The UN added that it had “no record of [HfA] being a formal part of the Summit process.”

Explaining their use and removal of the UNFSS logo, HfA said: “When we were informed that the logo may create confusion, HealthforAnimals promptly contacted all recipients to clarify that the document was not an official UNFSS document and avoid any ambiguity.”

More recently, the latest Intergovernmental Panel on Climate Change (IPCC) report released in August highlights the urgent need to tackle one particular livestock-related gas: methane. About 44 percent of livestock emissions are methane, the FAO has found.

Reducing livestock numbers could, however, threaten the profits of HfA members. Last year, the animal medicine sector was valued at $45.4 billion and farmed animals represented about 62 percent of that value, according to a recent report by FAIRR, a $40 trillion investor network encouraging food companies to reduce animal protein reliance.

While surprising some critics in its bias, the tone and approach of the HfA document was familiar to others and comes in the wake of previous investigations by DeSmog that have shown how both the meat and pesticides industries have attempted to greenwash their image.

A recent study co-authored by Jacquet found many of America’s largest industrial meat and dairy companies had made efforts to undermine climate change reduction policies. The same companies are presumed to be some of the largest buyers of animal pharmaceuticals, although transparency is lacking. The study ranked Tyson, National Beef, and Smithfield highest for undermining climate policy.

Climate and human health scientists have found that current livestock production and consumption levels are unsustainable and incompatible with the Paris Agreement goal of keeping warming to well below 2 degrees Celsius.

Substantial cuts to herd numbers would be needed too. The data underlying recent research by Marco Springmann, Oxford University specialist in environmental sustainability and public health, indicates that to meet the Paris commitments the world should be aiming for 47 billion food animals by 2030, instead of the current trajectory toward 87 billion.

Estimates vary, but most scientists agree that animal protein production is responsible for at least 14 percent of greenhouse gas (GHG) emissions globally. A few non-peer-reviewed analyses go higher, though, calculating rates of 37 percent and even 87 percent.

The HfA briefing document, however, tries to argue that livestock are responsible for only 5 percent of direct GHG emissions. The livestock sector is known to favour direct emissions estimates that account only for the methane and nitrous oxide produced by rumen digestion and manure management.

“This is typical livestock sector framing,” said Jacquet. “Why should we care only about direct emissions? Nobody thinks that way.” Rather, it is the combination of direct and indirect emissions, particularly those from deforestation of land to grow feed for animals on intensive farms, that “are serious factors in the sector’s overall climate change impacts,” she said.

“The livestock sector is responsible for the majority of all food-related greenhouse gas emissions. As a percentage of overall emissions, that’s easily more than 14 percent when all sources of emissions [direct and indirect] are accounted for,” said Springmann. “In that context, the HfA’s quote of 5 percent of direct emissions represents a gross omission.”

The 5 percent figure is “simply an accounting construct,” said Tara Garnett, acting director of TABLE, a food systems discussion platform run by the University of Oxford, Wageningen University, and the Swedish University of Agricultural Sciences. Summarising the paper’s cumulative effect, Garnett said it was “incredibly distortive.”

Peter Stevenson, lawyer and policy director for Compassion in World Farming, called the animal pharmaceutical industry “one of the leechlike structures attached to Big Ag”.

Comparing the document’s use of misleading data to “Big Tobacco and Big Oil”, Stevenson said its claim that global dairy emission intensity fell by 10–11 percent from 2005 to 2015 ignored the fact that the same UN source document found that while emissions per litre went down, overall dairy sector emissions increased by 18 percent.

In the Netherlands, found to be the  most livestock-dense country in the EU as of 2016, opposition party leader for the Party for the Animals, Esther Ouwehand, warned the document was an example of “how lobbyists from the agro-industry manipulate food policy.”

Putting things in the most basic terms, particularly given recent floods in Germany, Belgium, and the Netherlands which killed at least 120 people and are seen as climate-change related, Ouwehand said: “any document or discussion about livestock and climate change that does not include targets for reducing livestock numbers, is not taking climate change seriously.”

For Henk Hobbelink, agronomist and co-founder of GRAIN, an international NGO that supports small farmers, the HfA briefing is a sales document. In his view, it is aimed at garnering the financial, political, and regulatory support needed to boost animal pharmaceutical purchases by farmers in emerging markets who currently cannot afford, and whose priorities do not include, such items.

“[Animal] pharmaceutical companies are part of what’s causing climate change, but here we see them using the UNFSS as a sales opportunity to protect existing markets, the mega farms, and reach new clients, smaller farmers in the Global South or what the industry calls emerging markets,” he said.

Additional concerns for Hobbelink and others include the report’s mixing of different types of farmers. “[The document] makes no distinction between small farmers and the mega-farms that are [the] biggest buyers of animal medicines, and which are responsible for most agricultural emissions due to the large amounts of manure they produce and the feed they need,” including soybeans imported from areas linked to forest clearance, Hobbelink said.

Thomas Van Boeckel, antimicrobial resistance, disease, and livestock production systems scientist and at the Swiss Federal Institute of Technology, agreed, calling the document “hypocritical” in its talk of “pastoralists in Kenya or Asia” when HfA member clients are “any of the world’s top ten poultry, pork, and chicken producers.”

HfA’s claim that “more overall production [of animal protein] is needed” to feed a growing global population was equally problematic for critics. The “we have to feed the people” argument is often used to justify any major agribusiness, said Jacquet. But, it is not the quantity of food that is the problem, she said, rather distribution and access.

Nor, said Nikolai Pushkarev, policy coordinator with the European Public Health Alliance (EPHA), should richer countries be so keen to export their “exaggerated” animal protein habits. Instead, he said the focus should be on getting animal proteins to those most in need of them.

The HfA’s use of hunger was, in itself, a moral issue, said EU agriculture policy director for Greenpeace, Marco Contiero. “[W]e are talking about a billion-dollar economic player hiding behind the image of a farmer with a few cows on grass [and using] the millions of people who go to bed hungry every night to claim that we should not lower animal protein production, [that] is immoral.”

The briefing’s clear support for healthy livestock was a point of consensus among those interviewed, but its approach raised hackles. “There are various ways to improve animal health. Reducing stocking densities is one. But that would not make the animal health industry any money,” said Van Boeckel.

Fewer animals and keep them outside is what’s needed, said Cóilín Nunan, scientific adviser at the Alliance to Save our Antibiotics. “The current pandemic has made us all aware that social distancing and being outdoors helps reduce the spread of disease in humans … [the] same is true for animals.”

Those who defended the paper included Paul J. Moughan, a nutrition and protein metabolism specialist at New Zealand’s Massey University and co-author of another UNFSS brief on science, technology, and innovation transforming food systems in Asia. Moughan said that while HfA’s briefing was “written from a particular perspective” he did not see it as misleading.

Carlos Gonçalo das Neves, director of the Norwegian Veterinary Institute, agreed, saying he did not find the briefing’s final recommendations incorrect or erroneous. This is partly, he said, because the “authors are very clear about … who they represent” and partly because “we do need to invest in helping farmers” keep their animals in good health.

But the problem, said Walter Willett, Harvard University professor of epidemiology, nutrition, and medicine, is rather that the document highlights “all the positives of livestock production, and there are some,” while neglecting the many negatives. Where a negative is mentioned, he said—the increased risk of zoonotic disease—it’s as a “plug for drugs and vaccines” when in fact the most effective solution is “fewer animals.” Responding to the criticisms HfA said in a brief statement that it “stands by this document, which contributes scientific references to Food Systems Summit discussions and has been well-received by many policymakers, scientists and other stakeholders within FSS.”