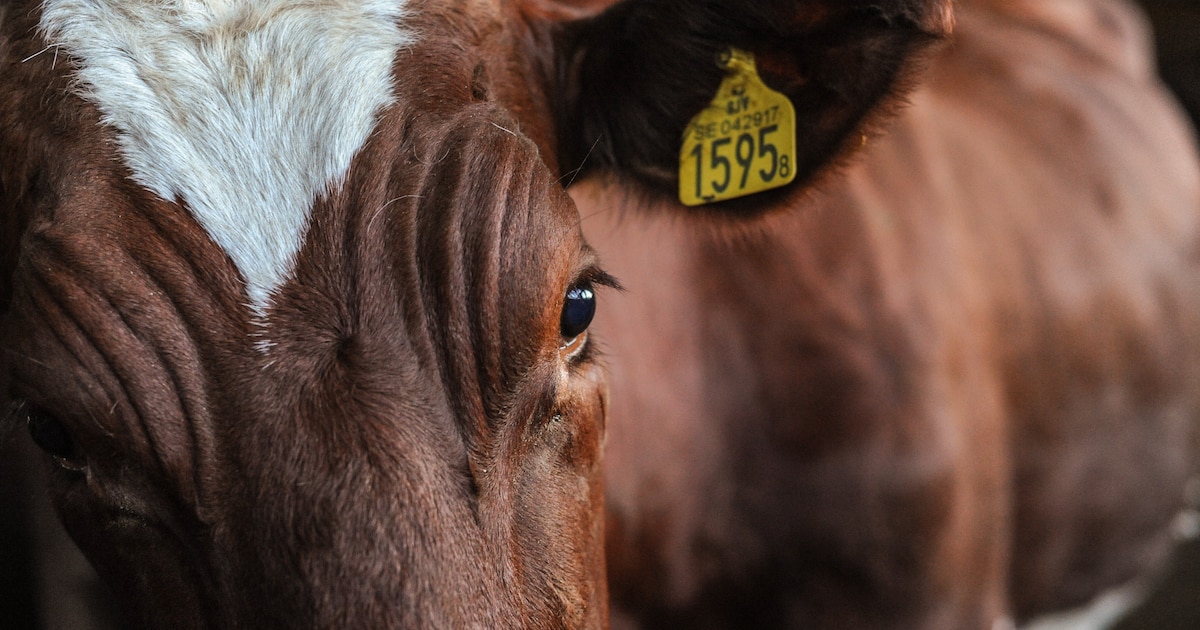 Sheep dragged by their horns, cattle struck in the face with electric prods, and a piglet left to drown. Small, family-run abattoirs have been described as ‘cornerstones’ of sustainable meat production but a new investigation from the UK nonprofit Animal Justice Project (AJP) paints a different picture. The organization planted secret cameras at G & GB Hewitt in Cheshire, England, revealing what it describes as “a blatant disregard for animal suffering.”

Claire Palmer, the founder of AJP, said, “Our 200-hour undercover investigation, which took place following an industry-led review of UK slaughter legislation in January, reveals extensive suffering and abuse, as well as law-breaking, right under the nose of the government vet and CCTV.”

Among the findings were short stun times, long stun-to-kill times, and workers failing to check for signs of consciousness before slaughter. AJP reports a stun-to-stick time of more than 15 seconds for 97 percent of the animals it filmed being slaughtered. When head-only electrical stunning is used, animals that are not bled within this time can regain consciousness before the point of death.

“The handling, stunning and killing of piglets is barely adequate, the stunning equipment appears to fail on several occasions, repeated shouting by the operatives simply adds to the animals’ distress, and at no time are operatives seen to monitor the effectiveness of the stun,” said Alick Simmons, former UK government deputy Chief Veterinary Officer and former Food Standards Agency Director.

“The overall impression given is of routine poor practice in premises barely fit for purpose. The circumstances are made worse by poorly trained and poorly supervised operatives,” he added.

Speaking on behalf of Hewitt, a spokesperson for the Association of Independent Meat Traders dismissed some of the claims but told The Independent that the animals may have been “treated unacceptably.”

Animal Justice Project fears that new legislation could see slaughterhouses in England given taxpayer money. Created as a result of Brexit, the Agriculture Act 2020 was designed to replace the European Union’s Common Agricultural Policy (CAP). Included in the act are powers for the UK Government to reform agricultural support schemes. The details have yet to be decided but the government said last year that abattoirs would be eligible for financial support.

“Instead of ploughing public funding into the abattoir sector, at a time when even the United Nations is pushing governments to promote plant-based eating, it must urgently address the fact that the system is failing farmed animals at their time of death,” says Palmer.

The number of slaughterhouses in the UK has plummeted in recent years. According to a report by the Sustainable Food Trust, there are now less than 250 red meat abattoirs in the UK, compared to more than 1,800 in the 1970s. Meat production, however, has increased. As family-run slaughterhouses close, the sector is becoming increasingly industrialized.

“Regulation has been against small abattoirs for a long time and hence a lot are underfunded,” Mettrick says. “They need investment and quickly.”

Although he works as a butcher, Mettrick is clear that he cares about animals. “Any kind of mistreatment is not on. Butchers stand up for animals,” he says. “At the end of the day, from a butcher’s point of view, mishandled animals make for poor quality meat.”

He believes funding for the small abattoir sector could benefit farmed animals. “It could pay for technology like heat sensors (to check the animals’ temperatures), better stunning equipment, and enhanced CCTV.”

Mettrick believes the abattoir industry generally has very high welfare standards. “The [Food Standards Agency] has the power to view CCTV (which is in all English abattoirs) and details of the stunning of every animal. This data is stored by every abattoir for a long period of time so it can be reviewed by the FSA,” he says.

The myth of “high welfare”

The FSA reports that 99.9 percent of animals pass through slaughterhouses without any welfare breaches, but Animal Justice Project is highly skeptical of this figure. “We believe issues are being unseen and underreported,” says Palmer. She notes that in the case of G & GB Hewitt, “the government’s own watchdog stamped the facility with its seal of approval for at least six years.”

“Our investigation has shown that nobody from the government randomly watches CCTV. It is down to the abattoir owner to do this. A clear conflict there,” she says. “We believe mistreatment in abattoirs will not be prevented by new laws or strengthening existing ones, due to the pure nature of what is happening.”

The new investigation is not the first to expose failings at a family-run slaughterhouse, bringing claims of “high welfare” into question. In 2018, Animal Aid went undercover at PJ Hayman and Sons in Devon.

“Our cameras revealed a worker slamming a gate shut on an animal’s head and a bewildered cow being beaten on the way to her death,” says Tor Bailey, Animal Aid’s farming campaign manager. She also noted the “woefully out of date equipment and poor worker practices.”

“Since 2009, Animal Aid has filmed covertly inside a number of British slaughterhouses from small scale to larger ‘high throughput’ premises. We found evidence of lawbreaking in nearly all of them,” says Bailey.

“There is no humane way to kill an animal who does not want to die,” she says, describing the idea that small abattoirs are more ethical as a “myth.”

The smaller, the better?

Mettrick certainly believes small slaughterhouses are kinder. “One benefit is that we take the ewes and the lambs together,” he says. “It’s more natural for them, compared to a big abattoir that takes all lambs and then the ewes separately. We have all the animals from the same farm as well, so they can stay together and don’t need to be mixed with other animals.”

As he deals with nearby farms, none of the animals brought to Mettrick’s abattoir are transported more than 35 miles. He considers this to be the main advantage of local slaughterhouses. “If we don’t want animals traveling longer to slaughter and we want to link the local farms and local meat to the customer then we need a network of small abattoirs,” he says.

But Palmer does not think that the size of an abattoir is significant. “Slaughterhouses will always be terrifying places for animals—the smells, unfamiliar sights, being surrounded by other frightened animals, and the pain and terror that stunning, shackling upside down and killing invariably causes.”

“The issues remain and arguably could be worse in small abattoirs due to a lack of training and funding,” she says. “Animal Justice Project has carried out two investigations inside small, family-owned abattoirs, and the suffering and breaches in legislation have been immense.”

Palmer sees animal welfare as a distinctly human responsibility. It is dictated by the people who own and operate the farms and slaughterhouses, not the size of the facility. “Changing practices within abattoirs may well reduce suffering, but it won’t eliminate it,” she says. ”Killing an animal harms the animal. It is actively doing something that deprives them of a future. If we put ourselves in the animals’ place, it becomes easier to understand—it is simply not true to justify killing and assume that any kind of reduction in suffering does that.”

In her view, the only way to serve both farmers and animals is by ending subsidies for slaughter and animal agriculture: “Governments should be assisting farmers to move towards plant-based food systems. That’s the only way domestic animals will be properly served.”