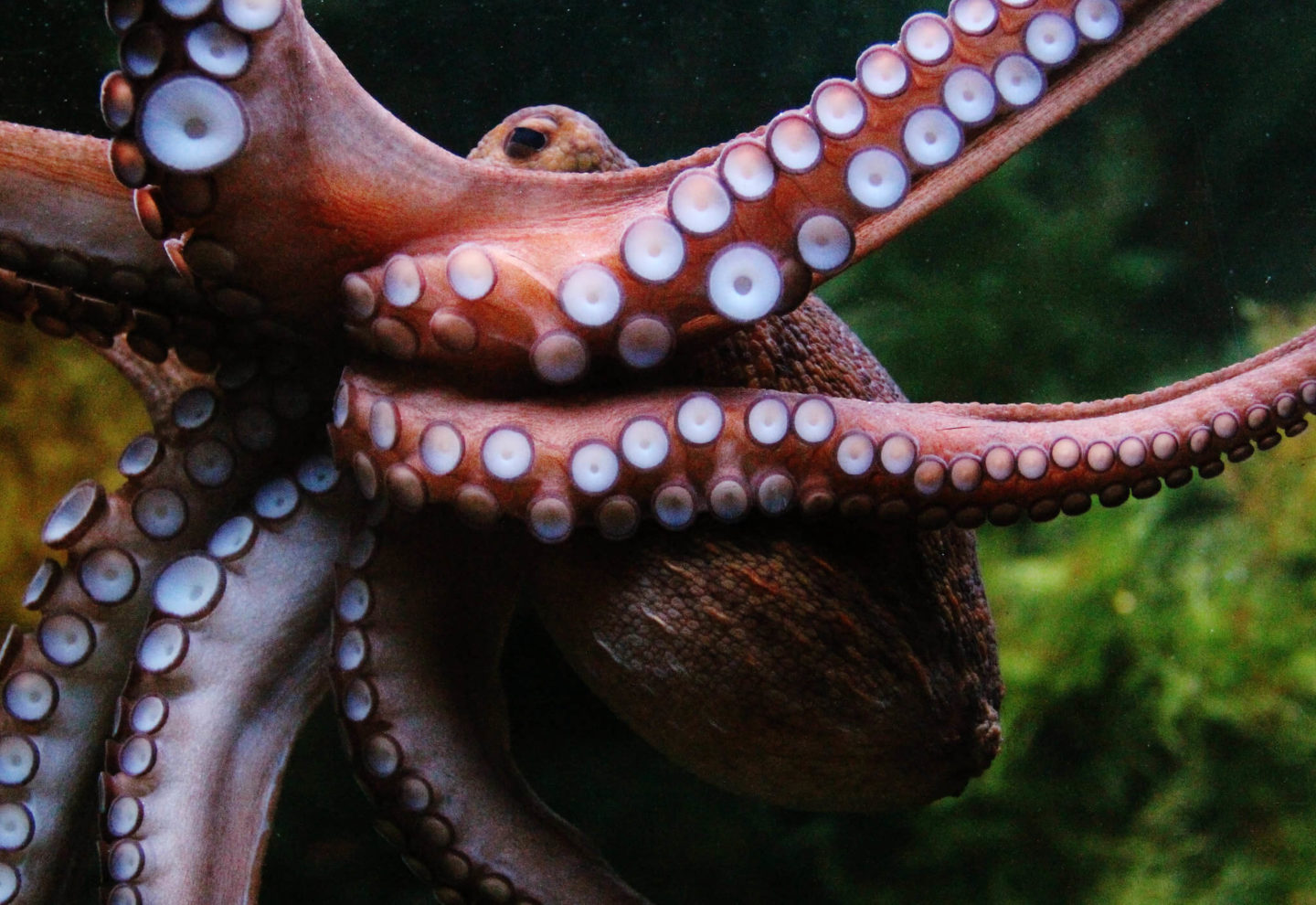 Climate Change: What Is It, Causes, Effects, and Solutions

For years, efforts to farm octopuses for food have struggled to get off the ground due to technological “bottlenecks”—namely, difficulties in feeding and breeding octopuses efficiently in captivity. Critics of the industry have argued that it is unethical to subject such intelligent creatures to factory farming conditions similar to those already suffered by billions of cows, pigs, chickens, and other animals. Nonetheless, research into how to overcome the bottlenecks and scale up the industry continues. One of the latest breakthroughs comes from researchers in New Zealand, who have found a new way to hatch eggs of a local species without depending on the mother octopus to incubate (brood) them. But intervening in the extraordinary brooding process could have serious welfare impacts while disregarding the uniqueness of the minds and lives of octopuses.

The intelligence of octopuses has become widely known, due in part to video footage of them doing fascinating things, such as in the episode of Blue Planet II where one octopus was filmed making itself a protective suit out of shells. In spite of this, there is a growing demand for their meat, particularly as a gourmet item in countries such as the U.S., Australia, and China, resulting in overfishing of wild populations. Octopus farming seeks to sate this global appetite, with its proponents arguing that the industry will relieve pressure on wild octopuses.

There are many reasons to be worried by the prospect of octopus farming growing to an industrial scale. In an essay last year, researchers including Jennifer Jacquet, assistant professor of environmental studies at New York University, and Australian philosopher Peter Godfrey-Smith decried its ethical and environmental perils. “We believe that octopuses are particularly ill-suited to a life in captivity and mass-production,” they wrote. As industrial farming aims to maximize efficiency and productivity, and because octopuses are asocial and carnivorous, they will need to be kept individually in tanks that will likely be small, sterile spaces without means for the octopuses to exercise their considerable mental capacities, likely to result in serious health issues, frustration, and poor well-being.

A recent commentary by neuroscientist Lori Marino, director of the Kimmela Centre for Animal Advocacy, and Barbara J. King, author and emerita professor of anthropology at the College of William and Mary (both senior writing fellows of Sentient Media) begins to look beyond welfare concerns for octopuses being farmed, or used in laboratory experiments. Given the evidence for octopus intelligence, they argue, there should be “intense scrutiny” of how these animals are treated and recognition of “the intrinsic value of their individual lives.” I invited Marino and King to expand on this view recently in an episode of a podcast I co-host. Marino said we should ask whether “these animals should be confined at all because don’t they have the right to freedom from pain and also freedom from forced captivity?” She referred to farming animals such as octopuses as a “violation” of their rights to “bodily liberty” and “bodily integrity.” The bid to artificially incubate octopus eggs is another way in which this bodily liberty and integrity can be violated, in addition to potentially harming octopus welfare.

The way octopuses reproduce has been described as a “surprisingly moving sacrifice” by science writer Ed Yong, while biologist Jim Cosgrove wrote that “the female octopus is as dedicated a parent as you could imagine.” Once she has mated, the mother octopus will brood her clutch of eggs, which can number in the thousands, at her own expense. She quits eating or doing anything except cleaning and protecting the eggs until they hatch, and then, drained by her efforts, she dies. Usually, the brooding period lasts for a few months—though in one extraordinary case scientists documented an octopus caring for her eggs off the coast of California for a marathon four and a half years.

The new method to cut the mother octopus out of this process devised by the New Zealand researchers is another step towards achieving artificial incubation at a large scale. In Mexico, an artisanal octopus farm is already able to artificially incubate the eggs of the species Octopus maya, but at a relatively small and labor-intensive scale. With a 95 percent hatching success rate, the method developed by the New Zealand researchers has the potential to be scaled up, at least for some types of octopus. The researchers placed strings of eggs of the species Octopus tetricus inside PVC tubes and simulated the way the mother octopus blows clean oxygenated water over the eggs. The aim of artificial incubation, as they write in the journal Aquaculture, is to “significantly reduce the extensive culture facilities, as well as the associated labor and operating costs required to maintain large numbers of female octopus over an extended period whilst brooding their eggs.”

Octopus farming thus looks set to emulate another of the standard practices of intensive agriculture: premature separation of animals from their offspring. This experience causes serious distress to mammals such as cows as well as long-term damage to the social and physical development of the young. Octopuses are not like mammals, as they are asocial and do not rear their young once they are born, but it would be a mistake to assume that they, therefore, have no meaningful connection to the eggs which they guard so diligently. Though there has been little research into the needs and well-being of brooding octopuses, a recent overview of the state of cephalopod science suggests that enabling captive brooding octopuses to carry out normal behavior, such as opening and closing the entrance to their dens to let out hatchlings, could reduce “maternal stress” and improve welfare.

If being unable to perform these behaviors potentially causes stress to the mother octopus, then being prevented from brooding at all seems likely to have some adverse impact on her welfare. I asked one of the researchers involved in the New Zealand study about this and he replied that the experiment had been vetted by the university’s Animal Ethics Committee under the country’s Animal Welfare Act, which is more progressive than most in that it covers octopuses and other invertebrates. Regarding behavioral needs, it requires that captive animals are given “opportunity to display normal patterns of behavior” in line with good practice and scientific knowledge. But these needs can only be met to the extent required by the use to which the animal is being put. Brooding is a normal behavior, yet is curtailed by artificial incubation. Moreover, how can the welfare impacts of intervening in octopus brooding be properly assessed when there is inadequate research into the subject? Clearly, such legislation has its limitations.

In the absence of more comprehensive research, King points out that we can look to what we do know to inform our thinking about the potential impacts of disrupting their brooding – that is, the dedication mother octopuses have to their eggs and their keen intelligence. “Precisely what an octopus mother thinks and feels I have no idea, but that she thinks and feels is known from science,” she wrote, also via email. “In short, yes, it’s ethically problematic to remove eggs from an octopus mother.” Godfrey-Smith, who wrote a book on the evolution of octopus consciousness, wrote to me that he also suspects “that taking all the eggs in a clutch might indeed be very stressful.”

What happens to the mother after egg-laying also matters for her welfare. Godfrey-Smith suggests welfare impacts could be mitigated if she is treated well enough and only has some of her eggs removed, but given that the point of artificial incubation is to eliminate the cost, space, and labor involved in keeping her, this seems an unlikely outcome. It’s possible that she would simply be killed immediately after, as is the case in the Mexican farm, saving her from the potential distress of losing her chance to brood (though the humaneness of killing methods is another issue to consider). But it may not be her only fate. The New Zealand researchers suggest that she could be sold before she begins to deteriorate physically, which could mean she is killed shortly after for food or it could mean she ends up in a laboratory to become the subject of experiments. Meanwhile, Ricardo Tur, the head of research at Spanish company Grupo Nueva Pescanova says that they have found a way to stop the female from dying after her eggs hatch, and this summer will attempt to get octopuses to reproduce for a second time. But if saving them from death only traps them in a prolonged cycle of captive exploitation, it is hard to see how this benefits the octopuses.

Looking at the matter from the perspective of animal rights as described by Marino, preventing the female from brooding her eggs denies this significant final act in her short but complex life. The case of the octopus who brooded her eggs for over four years to ensure that her hatchlings emerged at quite a developmentally advanced stage, and the fact that the researchers who found her couldn’t say for sure how she survived for so long, indicates that the course the brooding takes even within one species of octopus is dependent on the individuality of the female. As with everything else octopuses do, their reproduction is not simply some mechanical process with an inbuilt timer—which is precisely what it would become under artificial incubation. It is a more complex event which, performed freely, has its own place and value in the course of an octopus’s life. Preserving the integrity of this process and of the octopus’s life would mean leaving it to play out naturally, tragic end and all.

One of the lessons that should be learned from intensive agriculture is that the cruelty of the industry is multifaceted, with suffering and indignity inflicted on the animals in many ways—from how they are kept and bred to how they are transported to abattoirs and slaughtered. To avoid reproducing this catalog of abuses, all aspects of octopus aquaculture, including every new technological advancement, should at a minimum receive intense scrutiny for potential welfare issues. But ultimately, subjecting them to the conditions of factory farming is incompatible with recognizing the intrinsic value of their remarkable lives.