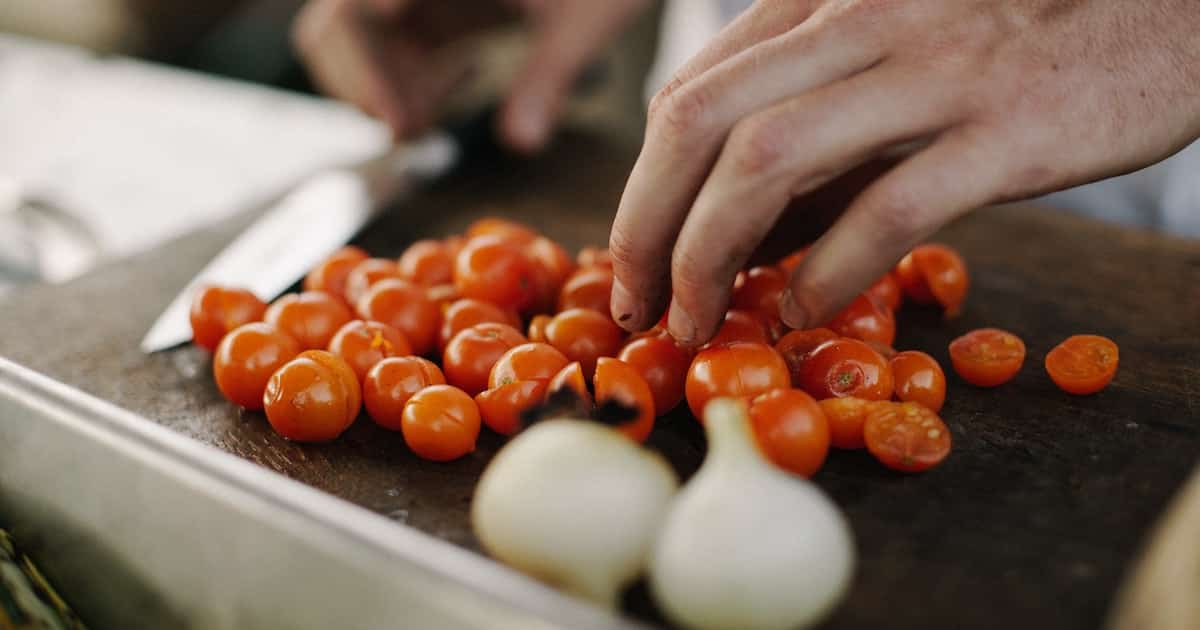 Scientists say that climate change is something that people can help to control from their kitchens and dining rooms, by cutting meat and animal products out of their diets. In a room full of folks who care about the environment or climate change, which is the majority of people in the world, there’s a good chance a number of them already seldom eat meat.

Rather than pushing people to go fully vegan, scientists are telling global political leaders that people in wealthy countries should focus on eating “plant-rich meals.” As Dr. Cynthia Rosenweig says in a TILClimate podcast, the aim is that “those who have choices” eat “more plant-based diets.” The delicious vegan meals below will help meat eaters heeding this advice, and anyone looking for inspiration to cook tasty plant-based dishes at home.

Pulses are not just the heartbeats that we feel under our skin. In the cooking world, a pulse is the edible seed of a legume, plants that include lentils, chickpeas, dry peas, and beans. The USA Dry Pea and Lentil Council asked Kate Taylor of Cookie and Kate to contribute a recipe in honor of the United Nations’ International Year of Pulses in 2016. The recipe, “Roasted Cauliflower and Lentil Tacos with Creamy Chipotle,” won the National Signature Pulse Recipe for the U.S. in a Facebook competition.

To make Taylor’s recipe vegan, you’d need to substitute the mayo with vegan mayo. The Minimalist Baker has a similar recipe that leaves out the lentils and includes a vegan creamy sauce using almonds instead of mayo.

Tacos, a food originating in Mexico, are typically made with corn tortillas. If you want to impress your friends and family, follow Food Empowerment Project’s VeganMexicanFood.com recipe to make corn tortillas from scratch.

In her recipe for vegan seitan ribs posted on My Plantiful Cooking, Meesha instructs readers how to make seitan with vital wheat gluten, nutritional yeast, onion powder, garlic powder, tahini, and soy sauce, and liquid smoke. Seitan, a modern term for wheat gluten, was originally developed by vegetarian Buddhist monks in China and Japan and is documented as far back as the sixth century.

Check out the Wikipedia entry for seitan to find a photo of mock duck meat sold in an iconic blue can that Asian supermarket shoppers will recognize. If making homemade seitan is too much work, you can try that canned seitan.

Richa from Vegan Richa offers a recipe for lasagna that does not require purchasing fake cheese. The key sauce is a blend of cauliflower, oil, garlic, non-dairy milk (e.g., almond milk), nutritional yeast, olive oil, lemon juice, water, and flour. It is additionally seasoned with black pepper, onion powder, thyme, and basil. The entire recipe is nut-free and can be made gluten-free.

Nagi from RecipeTinEats, who posts a modified version of Imma’s recipe, writes that “Caribbean food is a fusion of many different cuisines, including African, American Indian, European, Indian, Arabic and Chinese.” This particular dish is rooted in Trinidad but originated in South Asia.

Viranjini Munasinghe explains in an interview with Asia Society that after enslaved people of African descent were emancipated in the British Caribbean in 1838, Indians suffering under British rule came to Trinidad, which was also under British rule, to work as indentured laborers in sugar plantations. The two major ethnic groups in Trinidad are Afro-Trinidadians and Indo-Trinidadians.

To make vegan shawarma, Janelle of Plant-Based Folk uses fresh mushrooms in place of meat alongside the aromatic spices of this popular Lebanese and Middle Eastern street food. This recipe calls for sliced mushrooms to be soaked for 30 minutes in a marinade of cilantro, oil, garlic, and the following spices: allspice (which is actually the berry of a plant called Pimenta and not a mixture of various spices), coriander, cumin, sumac, turmeric, salt, and black pepper. Janelle, who has a Lebanese background, specializes in vegan Lebanese food recipes.

Chicken and waffles is a soul food dish. Jenné Claiborne of Sweet Potato Soul veganizes soul food and wrote a book that required her to research its history. Claiborne’s recipe substitutes fried oyster mushrooms for the fried chicken.

Claiborne writes, “My own dad worked at one of Atlanta’s very first vegan restaurants, Soul Veg, in the mid-80s.” The restaurant was part of a decades-long tradition of Black vegan soul food restaurants “serving collard greens, mac and ‘cheese’, cakes, pies, and ice cream without animal products.” Read more about the history of chicken and waffles here.

A quick and easy vegan meal can be found at Chipotle restaurants in their burrito bowls. Chipotle’s burrito bowls are all the ingredients of a burrito placed in a bowl, minus the tortilla.

According to Angela Morales’ autobiographical essay in which she connects the history of the burrito to her own history as a Mexican American girl growing up in southern California, the humble wrap is a working-class dish in which the large flour tortilla “becomes the fork, the plate, and the napkin.” Burrito, Morales writes, means little donkey, possibly because it resembled the pack that is put on a donkey, a working animal. It is believed that donkeys arrived in the Americas on Christopher Columbus’ second voyage.

The website, which is also available in Lao, tells readers that “Khon Lao (Lao people) are resilient and continue to honor Lao traditions,” despite the history of French colonization in Laos and the U.S. bombing of the country from 1964 to 1973, making it “the most-bombed country per capita in history.” The website invites readers to try Lao dishes, noting that many are traditionally vegan.

Vegan chefs and content creators online have published instructions for making vegan buttermilk: add a little bit of apple cider vinegar or lemon juice to a larger amount of non-dairy milk. Non-dairy milks, such as soy or almond, can be purchased or made at home. The mixture will curdle quickly. You can use this buttermilk to make a batter to coat portobello mushrooms in before pan-frying them, according to Lauren from Rabbit and Wolves. TikTok user @jinksyEats marinates oyster mushrooms in buttermilk before dipping the mushrooms in a series of dry and wet ingredients, ending with a final dip in cornflake bits. The mushrooms can be deep-fried or cooked in an air fryer.

Recipes using crispy buttermilk-flavored batter typically have chicken as the main ingredient. Fried chicken is a traditional food of the U.S. South and a staple of soul food. Christopher Carter describes that history in an L.A. Times op-ed: “The term “soul food” can be traced back to the 1960s, and as “soul” became a linguistic signifier for Black culture, it became a self-empowering shorthand for being able to survive in a racist society, and for resisting dehumanization. The roots of soul food are antiracist.” Carter is a Black vegan who sees Black veganism, particularly as he and Aph and Syl Ko practice it, as a way to examine and challenge how people define animals and tend to punish “any being who deviates, by species, race or behavior, from white cultural norms.”

Soup lovers can try dal fry, or spiced Indian lentil soup. Richa of Vegan Richa offers a photo of the bright yellow-orange dish, which is made with red lentils (masoor dal) and petite yellow lentils (yellow mung dal, optional). The recipe’s first step has the lentils cooking in water over medium heat for about 20 minutes.

Separately, the spiced flavor of the dish is made in a skillet with cumin seeds and mustard seeds sizzling and popping in oil, along with asafetida, a hot green chili (chopped), onion, garlic, ginger, and salt. Later, coriander, turmeric, and cayenne are added to the mix, along with tomatoes, lemon juice, and water.

Lentils come in several varieties, so it can be hard to know what type to purchase. Richa offers a useful guide to the different lentils you might see at the store, and how they might be labeled, depending on whether their Indian or English names are used.

When they are new to preparing vegan meals for themselves and others, meat-eaters and new vegans alike are repeatedly faced with the same basic questions.

What Meats Do Vegans Eat?

Vegans avoid eating any meat or animal products at all, including honey, dairy (e.g., milk, yogurt, cheese), or eggs. These and other ingredients are made from animals. However, it can be fun to try vegan meat substitutes and vegan foods that are made to resemble meat. SluttyVeganATL reveals on their Instagram account that their chicken-like drumsticks are actually made mostly of tofu skins and rice paper wrappers, coated in spices and flour, and deep-fried.

What Do I Serve My Vegan Friend for Dinner?

You can use search engines to find vegan recipes based on ingredients that are already in your pantry. In a Mercy For Animals video, Destiny of EatYoDestiny says “A lot of times when you shop your pantry first, you will spend less money at the supermarket.”

What Can I Make if I Don’t Have Meat?

If you don’t have meat, you can try one of the recipes listed above—all of which feature vegetables and legumes as primary ingredients. Choosing to eat less meat can be a personal and practical way to express one’s commitment to a better environment. For bigger food chain players like school cafeteria systems, reducing meat purchases might have an even bigger social impact.