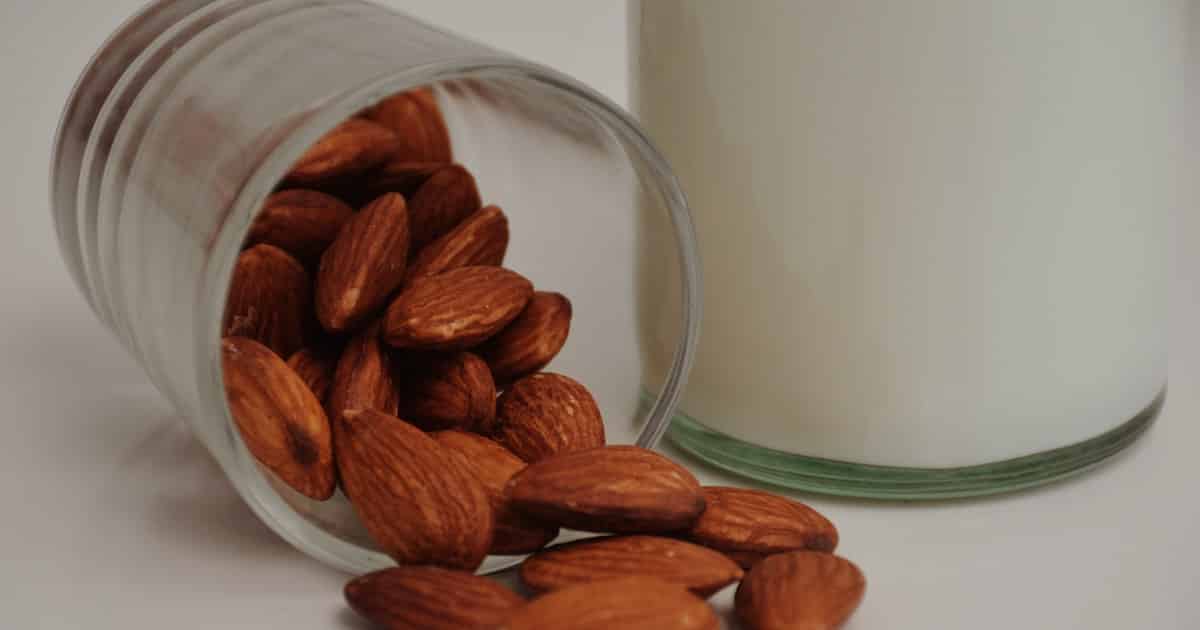 Meat, Money, and Politics: Inside Big Ag’s Struggle to Feed the World

Plant-based milks such as soy milk and almond milk have been popular in East Asia and the Middle East for centuries. Their preparation has grown from kitchen recipes handed down from generation to generation throughout Asian diasporic communities, into a reported $2.5 billion industry reaching 4 in 10 households through grocery store sales in 2020.

What Is Plant-Based Milk?

Plant-based milks are milk substitutes that are made from nuts (e.g. hazelnuts, hemp seeds), seeds (e.g. sesame, walnuts, coconuts, cashews, almonds, rice, flax, oats), or legumes (e.g. soy). Most of these milks are made by first soaking the nuts, seeds, or legumes in water, grinding them up into a puree, and then straining the fiber from the liquid.

Within the last four years, the planet’s biggest food companies—including Nestlé and Danone—have practically endorsed a major consumer shift towards plant-based milks. Danone produces a variety of plant-based milk products under the Silk brand, while Nestlé has recently announced that it is making pea milk.

Commercially produced plant-based milks are often fortified with vitamins and typically come in two varieties: sweetened or unsweetened. The milks may also be plain or flavored with vanilla or chocolate.

Why Do People Choose Plant-Based Milk?

Plant milks offer a recognizable alternative to animal milk: a thin, bland, whitish, creamy-textured drink that you can also add to coffee, cereal, or cake batter. Below are some of the reasons people opt for plant-based milks.

Venture capitalists seem to have taken note. They invested $64 million in plant-based dairy and eggs in 2015. In 2020, that number was $1.6 billion, according to the Financial Times. Today the sale of plant-based milks makes up more than one-third of the plant-based food market in the United States, and the top-selling milks are almond, oat, and soy, per the Good Food Institute.

Is Plant-Based Milk Good for You?

The question of whether something is good for you can only be answered by yourself, in consultation with medical professionals and people you trust. Usually, the answer is yes, plant-based milks can be good for your personal health, but there are caveats. Soy milk is one of the only plant-based milks that offer comparable amounts of protein to cow’s milk. Most plant-based milks in the United States are fortified with vitamins and minerals like calcium.

While vegan dietitians often celebrate plant-based milks online, this isn’t necessarily for the nutrition found in the drinks. Plant-based milks are a fun complement to a dairy-free diet that replaces nutrients traditionally found in animal milk through other whole foods.

As you drink your plant-based milk, why not allow yourself to contemplate a better food system—the one you want to see in your communities.

Which Plant-Based Milk Is the Best?

The best plant-based milk is the one that meets your needs, depending on what is important to you as you navigate the food system. When preparing or purchasing plant-based milks, there are several factors that might come to mind: do you like the flavor, how will you use the milk, what nutrients does it offer, whether your bank account can afford it, and more.

Consider also how much information you have about how the milks were made. For example, in 2013 most cashews were processed under significant pressure from supermarkets to keep costs low. As a result, both the farmers and the women who deshell cashews endured physically dangerous and underpaid working conditions.

The cashew industry is not alone in its methods. Most hazelnut farming for major confectionery companies relies on the exploitation of refugee and child labor, according to a 2019 New York Times report. The consolidated worldwide food market, established through white supremacy and colonialism, is a huge and complex system for conscientious beverage drinkers to contend with. About 81 percent of refrigerated soy milks and almond milks, and 53 percent of ready-to-drink coconut milk in the U.S. are owned by just four companies, according to a 2021 analysis by The Guardian and Food and Water Watch.

There is a yet broader fight for a form of sustainability that addresses all farm work and seeks to expand the food system’s capacity to honor the dignity of people of color in the United States, who have historically been excluded from workplace protections and social safety net programs. In June 2021, an Oregon farmworker died from working in extremely hot temperatures. Sebastian Francisco Perez, the collapsed farmworker, was found by coworkers who were helping to water a nursery that reportedly grows hazelnuts among its many offerings. Perez’s death was preventable, according to farmworker advocates, who are calling for basic access to cold water, shade, and paid breaks.

Nationwide, environmental groups have joined forces with workers’ rights and health advocates to protect the lives of the United States’ mostly immigrant farm workers from climate hazards. Farmworkers are essential to growing products like hazelnuts and almonds. The call for sustainability, farmworker advocates demonstrate, can push for a more antiracist supply chain.

Commercially made plant-based milks do not include assurances as to the treatment of human and nonhuman animals in their production processes. Yet there are cultural changes that Big Food has nevertheless heeded. The rising variety and consumption of plant-based milks seem to be a result of activists’ work for better food through raising issues with both companies and consumers, whether consumers themselves then put their informed choices down to taste, health, or social ethics. Food oligarchies are unfurling an increasingly novel array of plant-based drinks, in a nod towards better food systems.

The list below has been made using EWG’s Food Scores which ranks retail food products based on their nutrients, the presence of ingredients that are harmful to human health, and how they were processed (e.g. genetic modification and artificial ingredients). While the database is not comprehensive, companies can submit labels of their products so that consumers can more easily navigate the food system when making individual purchases.

Among unsweetened oat milks, Elmhurst Milked Oats scores the best in EWG’s Food Scores database, at 2.8 out of 10, with 1 being the best and 10 being the worst. While it is not certified organic, it does have a relatively safe list of just three ingredients and no processing concerns. Elmhurst’s chocolate oat milk also scores highest in the flavored oat milk category. Oats are a type of grain.

If you are seeking to increase your intake of omega-3 fatty acids, hemp milk is one potential source that you can make at home using raw hemp seeds, says Healthline.

Fans of Nutella and hazelnut coffee enjoy the taste of the same aromatic nut. Hazelnut trees grow well in the moist climate of the Pacific Northwest of the United States and are said to use less water than other nut crops, such as almond trees. This facet of sustainability is a popular feature of products made from hazelnuts, though the working conditions for hazelnut growers make it hard to see this as fully sustainable.

Hazelnut milk is a beverage that you can make at home as well, with one cup of hazelnuts and three-and-a-half cups of water, according to this recipe. The recipe requires you to soak the hazelnuts for hours and then blend them with water. The remaining pulp can be used to make cinnamon rolls.

The top-scoring unsweetened soy milk in the EWG Food Scores database is Silk Organic Soymilk, with a score of 1.8. While it contains some food additives and “natural flavor” as an ingredient, it is certified organic and a good source of vitamin A.

Three Trees Organic Original Unsweetened Almond Milk won the top score in EWG’s Food Scores database for both flavored and unsweetened almond milk. Its 2.0 score is very good, in part because it is a certified organic product.

Coconut milk can be sold in two different sections of the grocery store—as a beverage and as a canned cooking ingredient. With regard to beverages, you might want to check out Eco Echo Organic Coconut Milk. It has the best score (3.0) in EWG’s Food Scores database for plain coconut milk.

The three top-scoring, unsweetened cashew milks in EWG’s Food Scores database are as follows: Elmhurst (3.0), Califia (3.5), and Silk Cashewmilk with a Touch of Almond (4.5). The latter raises red flags in part because it is not certified organic and because it has an ingredient labeled “natural flavor.” The problem with “flavor” ingredients is that companies don’t have to tell the public what the flavor is made of.

Should I Be Concerned About Added Sugars?

Probably. Unless your commercial plant drink contains fruit, the amount of sugar listed on the label is likely added sugar. Avoiding sugary drinks is good for people who want to live longer lives, and manage the risks of cardiovascular disease, cancer, and Type 2 diabetes.

Food monopolies have made it harder for consumers and people on the bottom of the supply chain to make empowering food choices such as these for themselves and their communities. But public health and food system advocates examine this power dynamic as a social issue, and this examination of problems is fundamental to how social change happens. Groups such as Uprooted and Rising, a project of the Real Food Generation, are helping U.S. consumers to reconceptualize the connection between food systems and the people who create, run, and use them.

What Else Do I Have to Avoid in Plant-Based Milks?

One consideration when choosing a plant-based milk is to know whether your body or those of your loved ones will be able to digest it properly. Coconuts, almonds, and hazelnuts are tree nuts, which are a major allergen. Soy is another major allergen.

People with tree nut allergies will also want to avoid plant-based milks that contain macadamia, pistachio, and walnut. If you’re experimenting with sesame or spelt milks, know that sesame and wheat are common food allergies. People can even be allergic to oats.

With just a few companies controlling so much of what we eat, many of the choices we care about feel out of our control. What is in our control, however, is how we look at the problems in our food system.

To that end, avoid thinking of plant-based milks as a necessity. Enjoy them as a treat. Know that the ethical questions of consuming plant milks extend from the soils and waters that birthed them, to the health and safety of underpaid food industry workers that grew and processed them, to what they do in your blood, immune system, and intestines.

When making plant-based milks—whether it is quinoa milk, banana milk, flaxseed milk, or rice milk, the process is not too different from making coffee: soak, grind (while possibly adding other sweet or savory flavors), and strain the beans, nuts, seeds or other stuff. Leftover by-products can be used to make other dishes.

The sales of commercial plant-based milks are now 15 percent of U.S. milk sales in 2020, according to the Good Food Institute. That figure is on an upward trend. Yet because the burgeoning plant-based milk market is dominated by giant, multinational food companies, the social impact of making a commercial vegan milk purchase can feel ethically ambiguous.

The popularity of these types of drinks, however, suggests a trend towards more compassion in food production—whether for human health, the earth, or for farmed animals. In this sense, plant-based milks are artifacts of social change. For ideas on what people will say about sustainability and plant-based drinks in the future, look at today’s activist campaigns demanding that governments require growers to meet basic survival needs for human life. Another example of a current campaign is the Real Meals Campaign. It seeks to reorient college food suppliers to purchase from community-based sources, to invest in Black and marginalized producers, to reduce factory farming and carbon emissions, and increase transparency.

What Oat Milk’s Rising Popularity Means for the Environment