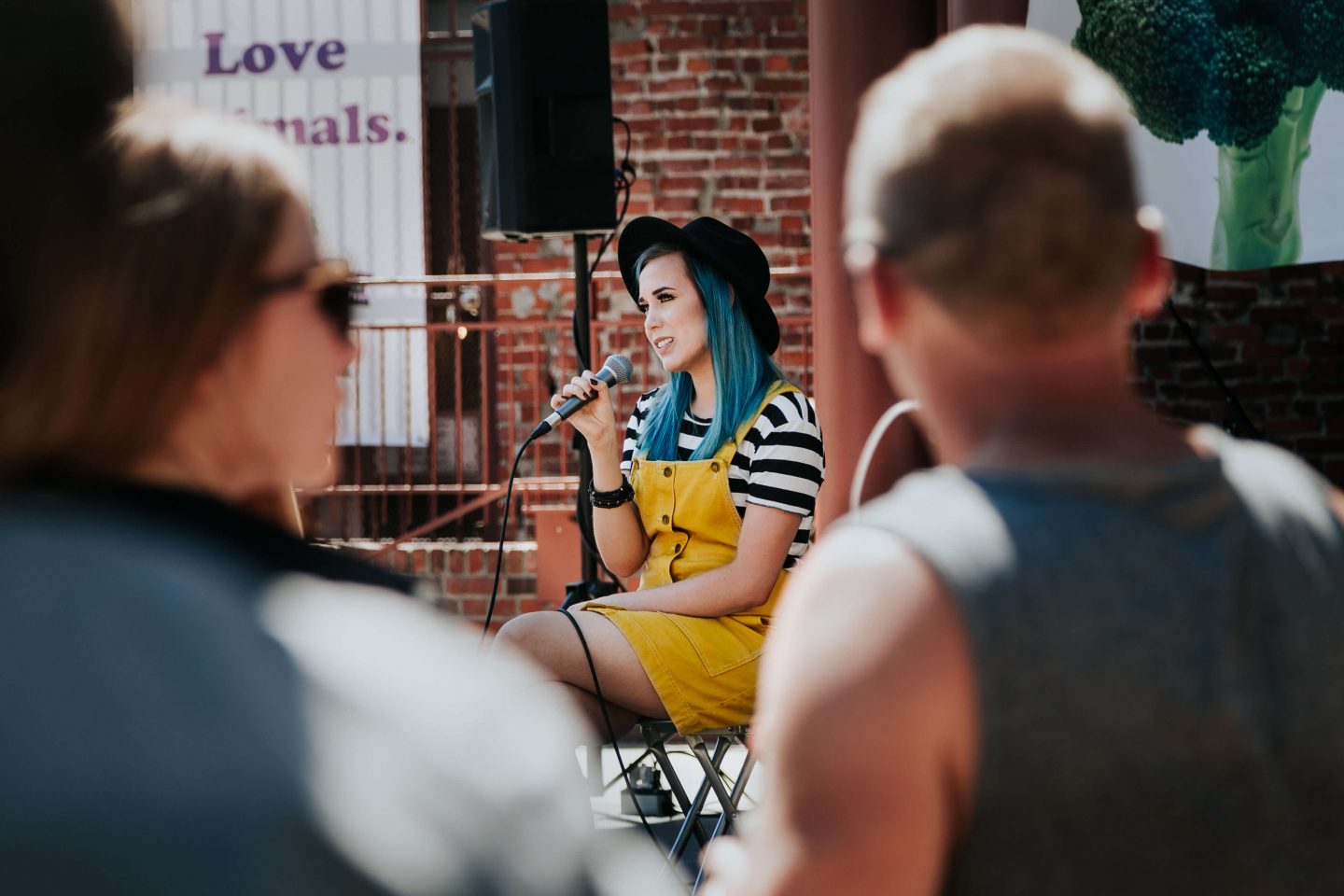 The amount of suffering overlooked so that people can eat, wear, and use animals is unfathomable. Over 150 million animals are killed for food around the world every day – just on land. Including wild-caught and farmed fish, we get a daily total closer to 3 billion animals killed. They live lives of utter misery, and it’s time we gave them a voice.

After years spent struggling with her own chronic health conditions, animal rights activist and Meat the Victims organizer Amy Soranno knows that doing nothing for animals is no longer an option.

She is dedicating her life to investigating animal agriculture and sharing her findings with the world. Listen here.

“Let’s imagine that you’re walking down the sidewalk and you see someone with their cute little puppy,” said Soranno in front of the crowd of animal lovers at the VegFest in Victoria, British Columbia. “Imagine that person is punching and kicking that little dog. How many of you would cross the street to help that dog?

“What if that dog was being abused behind a wall? You can hear the dog yelping. Day after day the abuse continues. How many of you would still do whatever it took to help that dog?”

If there were a show of hands, it would undeniably be in favor of helping the abused dog. That should come as no surprise. We all love animals. Almost no one will deny that. But there’s a big difference – for most people, at least – between advocating for the animals they call their companions, like dogs and cats, and the animals being raised and slaughtered for food.

“What if that puppy was a piglet?”

Piglets suffer behind the walls and closed doors of their abusers, too. In Canada, where Soranno is from, approximately 21 million pigs have been killed on factory farms and in slaughterhouses already this year.

Footage from countless factory farm investigations shows mother pigs and piglets crammed in tiny crates where they are unable to move or care for each other properly. Mother pigs struggle to walk on the slatted floor. Others die slowly where they collapse. Dead pigs are found rotting in their pens and piled in dumpsters. Soranno knows the look, the horrible smell, and the sound of those wailing piglets all too well.

On April 28, 2019, she led a group of 49 Meat the Victims activists into Excelsior Hog Farm, where more than 1,000 mother pigs were found suffering miserable lives in crates at one of British Columbia’s largest pig farms. Another 200 activists gathered outside.

The protests were part of the animal rights movement’s effort to create more transparency and accountability in the animal agriculture industry, not just in Canada, but the United States, Australia, Britain, and anywhere there are farm animals suffering.

In a sweeping act of defiance, activists can be seen sprinting past the “No Trespassing” signs and attempting to gain access to the pig farm. The second they entered Excelsior Hog Farm, everyone, including Soranno, knew they would likely face criminal charges. They also knew that they had a moral responsibility to the animals suffering inside.

“That’s okay,” said Soranno. “We’re challenging the law. That’s what we came here to do.”

After the action at Excelsior Hog Farm, Soranno was taken into custody. The rest of the activists walked peacefully off the property, many with tears streaming down their faces, holding peace signs and white flowers in their hands.

Footage from the farm made international headlines, despite being particularly hard to watch.

“If the graphic images of animals haunt you – good,” she said. “Do something about it.”

She certainly is. Soranno and the growing number of animal rights activists like her are inspiring a movement, not just because they challenge the status quo, but because their actions contain a vital message.

Animals are here with us, not for us. Remember that.