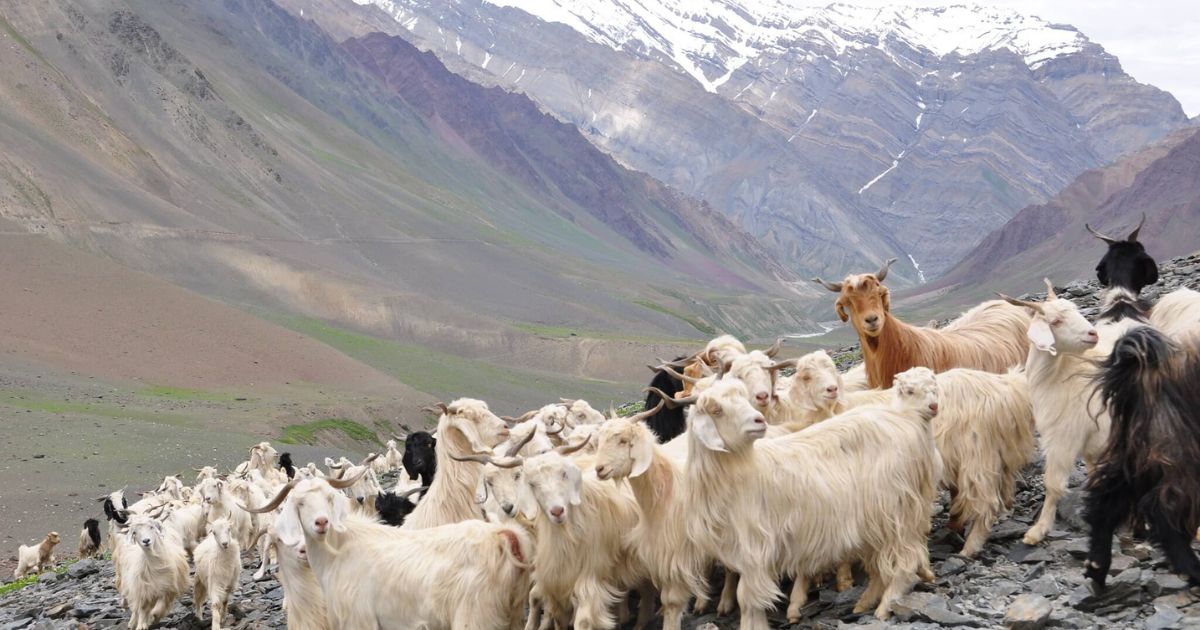 Cashmere has been used in clothing and accessories for thousands of years, eventually becoming a luxury fashion material in Europe by the 19th century. More recently, cashmere has become affordable to a wider range of consumers, yet farming methods continue to exact a high price on the goats used to produce this type of wool. Cashmere production is also responsible for unsustainable impacts on the environment, often made worse by climate change.

What Is Cashmere Made Of?

Cashmere is a type of hair that comes from one of several breeds of goat that historically originated in the mountainous region of Kashmir in the north of the Indian subcontinent. The hair is a soft undercoat that is mostly grown by these goats in cold winter weather and removed in the spring.

What Are the Origins of Cashmere Wool?

China is the world’s top producer of the global supply of raw cashmere, contributing over 60 percent of the total. Mongolia is second, producing over 25 percent. By the year 2000, China was buying more than half of Mongolia’s raw cashmere, which helped it gain even more power over the industry and the pricing of cashmere materials.

While these two nations supply the vast majority of cashmere wool, Afghanistan, India, Iran, Turkey and Pakistan are among the other countries that produce it.

The material has long been considered a symbol of social status and luxury around the world. It was a popular import into Europe from the 18th century, when it was worn by the royal and wealthy.

Cashmere’s history, though, began in Kashmir in the 13th century. This region of the Indian subcontinent has been impacted by violence and turmoil for many decades, as separatists seek independence from India. The area has also been the subject of territorial wars between India and Pakistan. Yet many in the Western world who buy the product that bears its name know little about the region and its ties to cashmere.

Why Is Cashmere So Expensive?

Unlike many other types of animal hair and wool, cashmere comes from one type of goat — the cashmere goat. Cashmere wool is preferred by many people over other types of wool because it is warm but also soft and less itchy to wear, and this demand certainly impacts the price at which it is sold.

There are other factors contributing to the cost of cashmere. Among these are the quantity of wool required for cashmere products and the time it takes to make them. Just one sweater is made from the wool of 4 to 6 goats and it takes a year for a goat to grow the amount of wool used for one scarf.

Some items containing cashmere are sold at a lower price if produced using a mix of materials rather than cashmere alone.

How Is Cashmere Made?

Though wool is sometimes removed from cashmere goats using shears or a brush, today it is often removed using a sharp-toothed comb. Combing is the preferred method for several reasons, primarily because shearing removes the overcoat as well as undercoat of wool, though this leaves goats with less protection from harsh weather conditions.

Various products are made from the raw cashmere, including cashmere clothing and scarves. The process may begin by dyeing the fibers to achieve a desired color, or mixing the fiber with other materials like silk or other wools. The next step is “carding,” in which the cashmere hair is detangled. At this stage, the sheets of wool are known as “rovings,” until they are then spun into yarn. The yarn is then turned into patterned fabric by weaving.

Cashmere comes from goat hair, which makes it an animal byproduct. Both foods and products produced from animals are not considered vegan, including cashmere.

There are vegan alternatives to cashmere, including a cashmere produced from vegetables. If these alternatives were to become more widely available, the fashion industry would have an opportunity to shift away from animal-based clothing materials.

There is a common misconception that animals do not suffer for the production of cashmere and other wool because their skins do not need to be removed, as they are in fur farming. However, animal advocates say the reality is very different.

According to the Royal Society for the Prevention of Cruelty to Animals, the removal of wool from cashmere goats is a lengthy and stressful combing process, during which a goat is tied up by the legs for as long as one hour. It can result in scratches, bruising and other injuries.

The suffering does not end when a goat is no longer used for wool either. A 2019 investigation of the cashmere industry in China and Mongolia revealed goats were eventually sold to slaughterhouses where they suffered, sometimes dying a slow death at these facilities.

The production of cashmere takes a heavy toll on animals and the environment, and there are other harms to consider too.

Even though the cashmere clothing market is expected to be worth $3.5 billion by 2025, many of the Mongolian farmers behind its production are living in poverty. These farmers also live on land that is vulnerable to desertification, an effect of climate change and overgrazing. Increasing goat herd numbers has only further degraded the land.

Like other aspects of the fashion and animal agriculture industries, cashmere production brings up multiple ethical issues to consider.

Goats raised for cashmere typically roam and graze freely, giving them the opportunity to experience a life that is vastly different from those lived by the billions of animals confined on factory farms, particularly chickens and hogs. Yet many of these animals endure harsh weather extremes that are beneficial for the growth of their profitable wool, and also suffer greatly when their wool is removed.

Because the majority of the world’s cashmere comes from China and Mongolia, the goats have little to no legal protections from suffering. Even though public support for animal welfare has been surging in China, few animal welfare laws exist to guarantee humane handling and slaughter.

Are Goats Killed for Cashmere?

There is a common misconception that goats and sheep raised for their wool are not slaughtered because the material isn’t meat or hide. However, like dairy cows, when these animals are no longer considered profitable — in the case of cashmere goats, when they are no longer able to produce enough wool — the animals are then killed for cheap meat.

At that point, the cashmere goats are sent to slaughterhouses. Investigative footage has revealed these animals endure violent abuse there, ultimately killed in much the same way as animals farmed for food.

What Is Cashmere’s Environmental Impact?

The multi-billion dollar cashmere industry has an increasingly heavy environmental footprint. In January 2020, Harper’s Bazaar wrote that “the demand for cashmere has grown to a point where it is no longer sustainable.”

In Mongolia, cashmere goats account for 60 percent of the country’s livestock animals. Grazing is depleting important grasslands, as estimates suggest 70 percent of grazing land in Mongolia has been degraded to varying extents. These grasslands, which are relied on by poor farmers, grazing animals and wildlife face multiple threats, including rising water usage and climate change.

Like animal agriculture, cashmere production is contributing to climate change in a way that threatens its own existence. Overgrazing is helping to cause more of what is known in Mongolia as a “dzud,” an unusually cold and snowy winter that follows on the heels of a summer of drought, which in turn leads to the mass deaths of grazing animals as food and water become unavailable.

The effects of cashmere farming should be of wider public concern. A study published in Conservation Biology in 2013 linked the grazing of goats for the global cashmere trade to the decline of several large mammal species native to Central Asia. Grazing goats can alter soil by trampling, leading to more runoff and erosion. They also tend to eat vegetation left by other ruminants that could act as protective soil cover. Goats are also frequently raised in environments naturally vulnerable to desertification because there is little rainfall.

Wool production also may not be as sustainable as it seems, or as its marketing sometimes suggests. A November 2021 report by the Center for Biological Diversity and Collective Fashion Justice’s CIRCUMFAUNA initiative found that while wool is often marketed and labeled with terms such as “sustainable,” there is little evidence to back up such claims and “no centralized data to track, report or evaluate the impact of wool on land, water, climate and biodiversity.”

Why Shouldn’t You Buy Cashmere?

Cashmere is not only expensive for consumers, but comes at a high cost to animals and the planet.

Today there are many cashmere alternatives to choose from, from affordable retail offerings to high-fashion designs. One can find clothing and accessories that are not made from animal hairs, fur or skins, and that potentially take less of a toll on the environment.

The best way for individual consumers to help is to stop purchasing cashmere and other products made from goats. Browse the Humane Shopping Guide offered by the Humane Society of the United States.

This is just one way to get started. Sentient Media’s Take Action page offers a list of many simple ways to make a difference for animals.

The Best and Worst Countries for Animal Rights