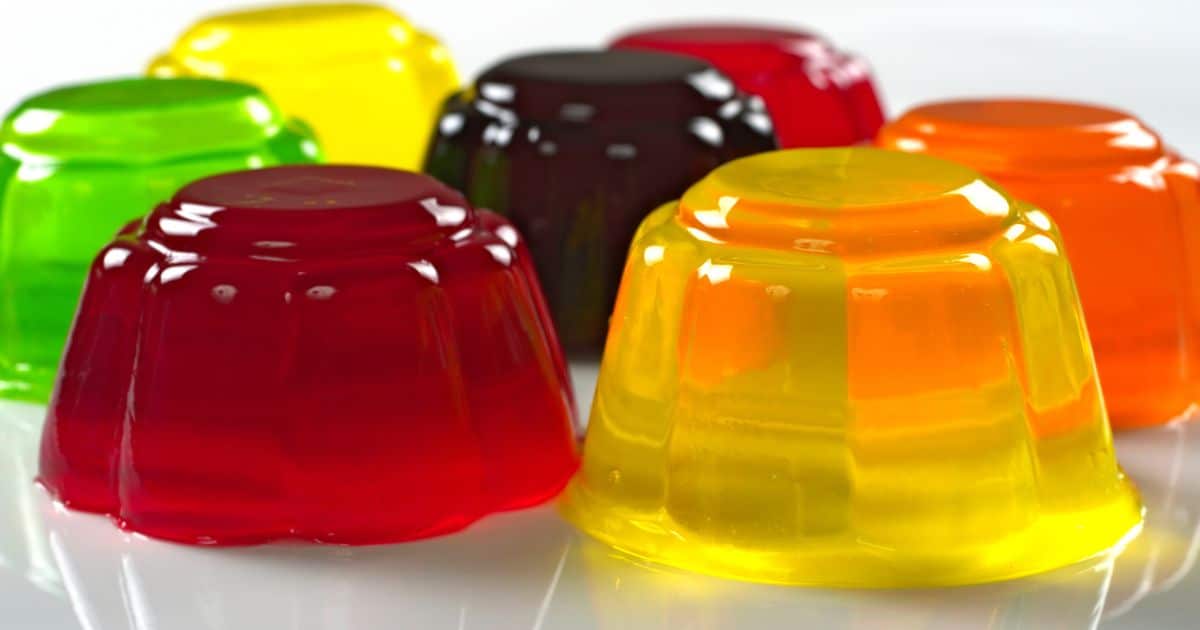 Jell-O is an American dessert icon. In an early episode of “The Simpsons,” Marge’s dessert tower wiggles like the translucent corpse of Slimer from Ghostbusters, marshmallows suspended throughout. Jell-O is made of gelatin, a byproduct of the meat industry. Luckily, there are plenty of alternatives that don’t come from factory farming.

Jell-O is by far the most popular American brand of ultra-processed gelatin dessert. Consumers can prepare Jell-O products in home kitchens using boxes of powdered gelatin that are flavored and mixed with sweeteners, or it can be purchased in a ready-to-eat form. Gelatin is a processed form of collagen, the connective tissue that holds animals together, including humans. Collagen provides the structures of our cartilage, tendons, blood vessels, bones and skin.

A major element of Jell-O’s rise to success has been its marketing, including print campaigns geared toward housewives, television ads pushing Jell-O as a snack for kids and promotion of the product as a weight loss solution. Jell-O grew in popularity in the mid-20th century, during a time when lab-developed and processed foods were new and fashionable.

No, Jell-O is not a vegan food product. The primary ingredient of Jell-O and its gelatin dessert competitors is drawn from the skin, tendons, ligaments and bones of cows, pigs and other farmed animals who have been slaughtered for their meat.

What Is Jell-O Made Of?

Jell-O is made of powdered gelatin, sweeteners like aspartame and sugar, artificial flavoring, food coloring and other ingredients. A ready-made version of Jell-O lists water as its first ingredient, then sugar, fruit juice blend from concentrate, gelatin, and less than 0.5 percent of the following: adipic acid, citric acid, sodium citrate, red 40, natural and artificial flavor.

What Animal Is Jell-O Made From?

The wiggly and semisolid aspect of Jell-O desserts relies on the same stringy protein molecules that make it possible for our skin to stretch, our joints to twist and other parts of our bodies to connect in an elastic and flexible way.

Animals have these protein molecules too. Cows, pigs and fish are the most common types of farmed animals from which gelatin — the primary ingredient of Jell-O — is sourced. Nearly all cows, pigs and fish in the meat industry are farmed in large, factory-like settings that restrict their movements from birth until they are old enough to be slaughtered.

To extract gelatin, food processing plant workers first soak the skin, bones and other connective tissues of these animals in hydrochloric acid. Then, they heat and ultimately boil the same materials in distilled water. The liquid from this stew is separated out, and the remaining residue is dried and ground into a powder. This powder is unflavored gelatin.

Is Jell-O Made out of Pig Skin?

The gelatin used to make Jell-O can be made from pig skin. Gelatin is sourced from the skin, bones and other connective tissues of pigs, cows and other farmed animals.

In 1996, neighborhood complaints about the stench emanating from a gelatin plant outside Boston attracted the attention of lawmakers and the Associated Press, which reported that the water used to soak animal skins was dirty, smelled like dead animals and periodically went septic.

Is Jell-O Still Made From Bones?

Jell-O can also come from bones, as gelatin comes from the bones, skin and connective tissues of farmed animals. In a 2020 news report about a legal dispute over the noxious odors coming from a factory in Massachusetts, the skin and bones of “raw pig and cow remains” were the source of the gelatin that was made there. Complaints against the processing plant included the smell of “rotting flesh and other vile odors” that allegedly caused “headaches, nausea and vomiting” among neighboring residents.

What Foods Are Made of Gelatin?

Gelatin is typically used in foods that require some structural support, including spreads, jellies, sauces and other processed foods.

Jello-O is considered an ultra-processed food, a category that many academic researchers and nutrition experts say is not healthy. However, processed foods can offer convenience and important nutrients to busy households with limited food budgets. Weighing the benefits that a food offers against its drawbacks ultimately remains up to the consumer. Below are some points to consider about eating Jell-O.

For people who are allergic to gelatin, Jell-O is clearly a product to avoid.

Culinary traditions from around the world use a variety of gelatinous foods made from plants rather than animal-derived ingredients. Agar-agar and plant-derived starches are just two examples of vegan ingredients that home cooks can find at grocery stores. Agar-agar is made from seaweed and is an ingredient used in Southeast and East Asian cuisines to make jelly desserts as well as savory dishes such as aspics. In the United States, corn starch is a staple ingredient used to thicken sauces.

Korean acorn jelly (dotori-muk) has the signature wobble of Jell-O products but without the animal-derived ingredients and sweetness. Also unlike Jell-O products, this popular dish is light brown in color, bland in flavor and perceived as healthy.

Korean traditional cuisine also uses starches made from mung beans and buckwheat to make similarly savory jellies (muk). Muk is typically served with paper-thin cuts of roasted seaweed (gim) and soy sauce (ganjang) that has been seasoned with sesame oil, garlic and chili pepper. Muk dishes are usually served as side dishes, whose flavor is largely determined by the seasoning of the sauces that accompany the vegetable-based gelatins.

Dotori-muk was originally made by people seeking to survive, who learned to convert acorns from oak trees into starch. During the Korean War (1950-1953), this food was particularly popular, as starvation drove people to knock acorns from the trees instead of waiting to gather them from the ground.

In northern and western regions of China, liang fen is a mung bean jelly dish that is similar to Korean mung bean jelly (nokdu-muk or cheongpo-muk), as is laping in Tibetan cuisine. These white jellies tend to be “silky, slippery and springy,” and are served cold in the summer, along with a spicy, tangy sauce, according to Red House Spice.

Other wobbly sweets that are vegan include grass jelly, enjoyed throughout East and Southeast Asian cuisines, and nata de coco or coconut jelly from the Philippines, as well as many others from around the world.

If you haven’t already done so, you can make the switch to eating animal-free gelatinous foods. Check out Sentient Media’s Take Action page where there is a section listing dietary change resources. You can sign up to give veganism a try, sign a petition, advocate with a group of people or learn more about going vegan.

Where on Earth Does Gelatin Come From?