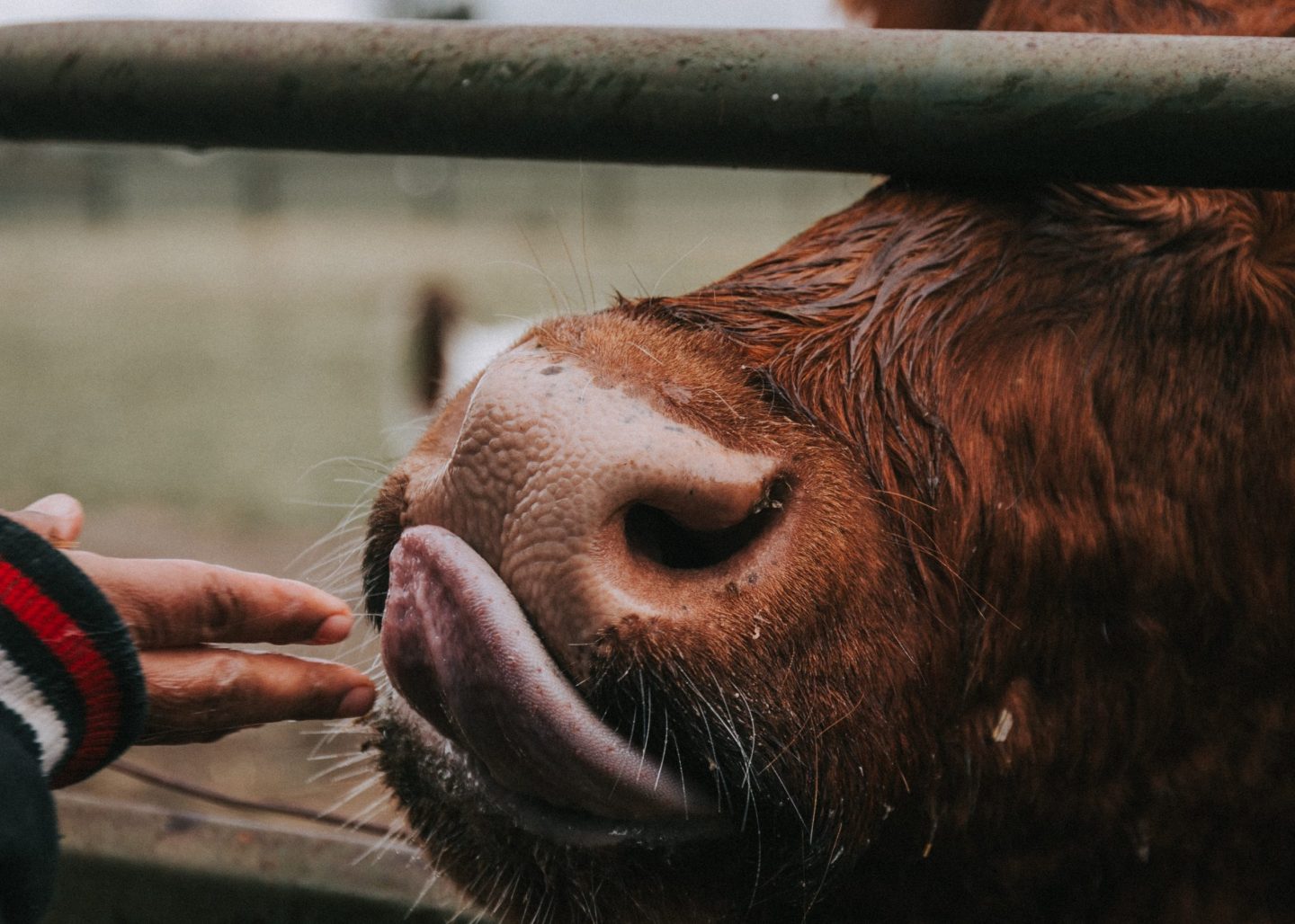 At the end of 2018, The Economist declared 2019 “The Year of the Vegan.” This prediction has turned out to be valid. In March, 37 leading scientists announced that, in order to feed a future population of 10 billion people, plants need to become our new main course. In September, a 3D-printer grew meat in space. In November, the United States’ biggest milk producer filed for bankruptcy. Throughout 2019, food chains like Burger King, Greggs, and KFC premiered vegan burgers, sausage rolls, and chicken wings. On the first day of 2020, a record number of 300.000 people signed up for Veganuary, and on the sixth day, a vegan menu was served at the Golden Globes.

Vegans take a stand against animal cruelty by eating plant-based diets and avoiding products like leather, silk, wool, and cosmetics tested on animals. Vegans also abstain from activities that involve animal exploitation like horse racing, circus shows, and taking animal selfies. Veganism, for vegans and non-vegans alike, increases and shapes consumer awareness of the preventable harm endured by many species of animals.

Are you a non-vegan feeling remorseful about eating animals? Toying with the idea of ditching meat and dairy? The reasons to adopt a plant-based diet in 2020 are plentiful and varied, ranging from ethical and environmental aspects to health and economic concerns.

The first reason to become vegan is ethical. In the 2010s, an increasing body of research confirmed that farmed animals are sentient and social beings with distinct personalities. Pigs perceive time, pregnant cows cope better with challenging situations when they have pen-mates, and chickens can deduce social status by watching other chickens. Animals of all kinds, including fish and crustaceans, are capable of feeling pain. Turning a part of an animal’s anatomy into food for human consumption undeniably causes the animal to suffer. Especially in an economic system that demands ever-increasing productivity, farmed animals endure short-lived existences, rife with disease and overcrowding, during which bodily mutilation, physical restriction, and human abuse are exceedingly common.

Farmed animals suffer, and not only in the places where they are reared. During their transport to slaughter, on trains, trucks, or ships, farmed animals endure days of overcrowded and unsanitary conditions without food, rest, or water. During the heat waves of the late 2010s, animals faced the additional burden of enduring record-breaking temperatures, with millions arriving dead at their destinations. Elevated ambient temperatures may also cause more animals to die in barn fires. At least 4.7 million animals died in barn fires in the U.S. since 2013.

Many farmed animal species, to maximize their economic potential, have been bred to the point of physical dysfunction over the last several decades. Breeding sows, female pigs that have been selectively bred to carry minimal body fat, often die prematurely because their bodies are unable to cope with giving birth to an average of 23.5 piglets each year. Some beef cows are forced to routinely give birth by cesarean sections because they carry a muscular mutation that maximizes their slaughter weights but precludes the possibility of vaginal births. Many breeds of factory-farmed chickens grow so quickly that they lose the ability to walk.

Vegans abstain from consuming all animal-based products, even those labeled as “humane.” Undercover investigations show that animal cruelty takes place on allegedly ethical farms, too. All animals, even those “humanely” treated during their lives, release cortisol and adrenaline just prior to slaughter and during other stressful situations. Stress responses are routinely observed in dairy cows when calves are separated from their mothers. Animals living on small, local farms are exploited and slaughtered, just like animals inside large factory farms.

Factory farming poses significant health hazards, which makes health—your own and that of the farmed animals—the second reason to become vegan. The unsanitary conditions of animal agriculture are known to cause the spread of E.coli, salmonella, and other illnesses. The extensive use of antibiotics in factory farming, even in healthy animals, is increasing the risk of antimicrobial resistance. Mutant bacteria, viruses, fungi, and parasites that resist antibiotic treatment caused 160,000 deaths in the U.S. in 2017. At current infection rates, antibiotic-resistant strains are expected to kill 10 million people per year by 2050.

The consumable products of animal farming—meat, seafood, milk, and eggs—endanger human health as well. Meat consumption is associated with heart disease, high cholesterol, and gastrointestinal cancers. Seafood, according to a new study, contains increasing levels of mercury due to overfishing and climate change. Milk consumption has been linked to skin conditions like acne and is unsuitable for 5.4 billion humans. (A reported 70 percent of the world’s population is lactose intolerant—or lactose normal, since 70 percent is a clear majority.) Studies of egg consumption have produced conflicting results—perhaps because the poultry industry itself from the 1970s onward has funded research on the health effects of eating eggs.

A plant-based diet, by contrast, offers many health benefits. Vegans avoid all the health hazards associated with animal product consumption; eating just plants can even lower the risks of heart disease, cancer, diabetes, and cognitive decline. In the late 2010s, both U.S. and Canadian expert nutrition associations gave their approval to plant-based diets. A vegan diet provides all essential nutrients except for Vitamin B12, which consumers can supplement in capsule, spray, or liquid form. (Contrary to popular belief, most farmed animals do not themselves produce Vitamin B12; they too receive it in the form of a supplement. The delivery method for Vitamin B12 is ultimately a choice between consuming the vitamin directly and channeling the vitamin indirectly through the body of an animal.)

The third reason for going vegan is environmental sustainability. Animal products are highly resource-intensive foods because animals, as sentient beings, need ample food and water to produce muscle, fat, milk, eggs, and offspring. Cropland, one third of which farmers globally use to grow farmed animals’ feed, occupies an area roughly the size of South America. Pastureland for the animals themselves globally covers an area about the size of Africa.

As of 2019, around 70 billion farmed animals every year are conceived, born, fed, slaughtered, and replaced in order to feed the planet’s 7.8 billion humans. Sustaining 70 billion farmed animals requires more than one third of Earth’s total habitable land and 16 percent of its freshwater. Yet, animal agriculture contributes only 17 percent of calories to the global diet. Plant-based foods growing on less than 12 percent of the Earth’s surface provide the remaining 83 percent of humans’ calories. This disproportion is especially concerning when considering that, in 2018, 820 million people suffered from hunger and 1.1 billion people lacked access to freshwater. Plants consume water, too, but considerably less than animals. A 150-gram beef burger requires 620 gallons of water, while a soy burger of the same size requires only 41 gallons. Because of its resource intensity, animal farming is responsible for a whopping 14.5 percent of annual global greenhouse gas emissions.

The production of meat, despite its inefficiencies, more than quadrupled between 1961 and 2013. Animal agriculture has consequently become a major driver of deforestation. If the human appetite for animal products continues to increase unabated, as the global population grows to a projected 10 billion people by 2050, all of the world’s remaining forests could disappear to make way for farmland. By requiring increasingly more land, animal agriculture is destroying the natural habitats of many species, such as elephants, jaguars, and other primates, all of whom face the threat of extinction.

Animal agriculture further strains the environment by contributing to local air and water pollution. Buying local products, often presented in positive terms, can mean that consumers are directly contributing to the pollution of their home regions. In Germany, for example, buying local meat increases the already illegally high nitrate levels in the groundwater.

The fourth and final reason to become vegan is social justice. Animal agriculture is part of an industrial production system that is riddled with social inequities. The noisy and smelly conditions of factory farming cause physical and psychological harm to both factory farm workers and adjacent communities. Factory farm workers are often members of vulnerable groups, including minorities, undocumented immigrants, refugees, prisoners, and people lacking education. Without better job prospects, factory farm workers spend ten or more hours per day in environments filled with knives, saws, grinders, and other machines designed to cut, kill, and dissect.

In 2019, high-speed industrial machines in U.S. slaughter plants killed approximately 140 birds per minute. Workers are required to “process” thousands of animals, many of whom are actively fighting for their lives, each working day. A 2017 study estimates that in the U.S. alone, 27 factory farm workers daily require hospitalization as a result of amputations and other workplace injuries. Factory farm workers are paid exceedingly low wages and endure unsanitary working conditions and the constant threat of job loss due to aggressive productivity requirements.

With this new decade ahead, you have the opportunity to join a movement that could conceivably define the 2020s. The climate crisis became more acute during the 2010s and is, unfortunately, worsening every year. Animal rights also deserve to take center stage based on the undeniable evidence that animals, just like humans, are sentient beings capable of suffering. Veganism is a highly effective and necessary response to humans’ and animals’ many predicaments because it tackles climate change and animal exploitation simultaneously. Go vegan in 2020 for your health, your planet, and a more compassionate world for all sentient creatures.