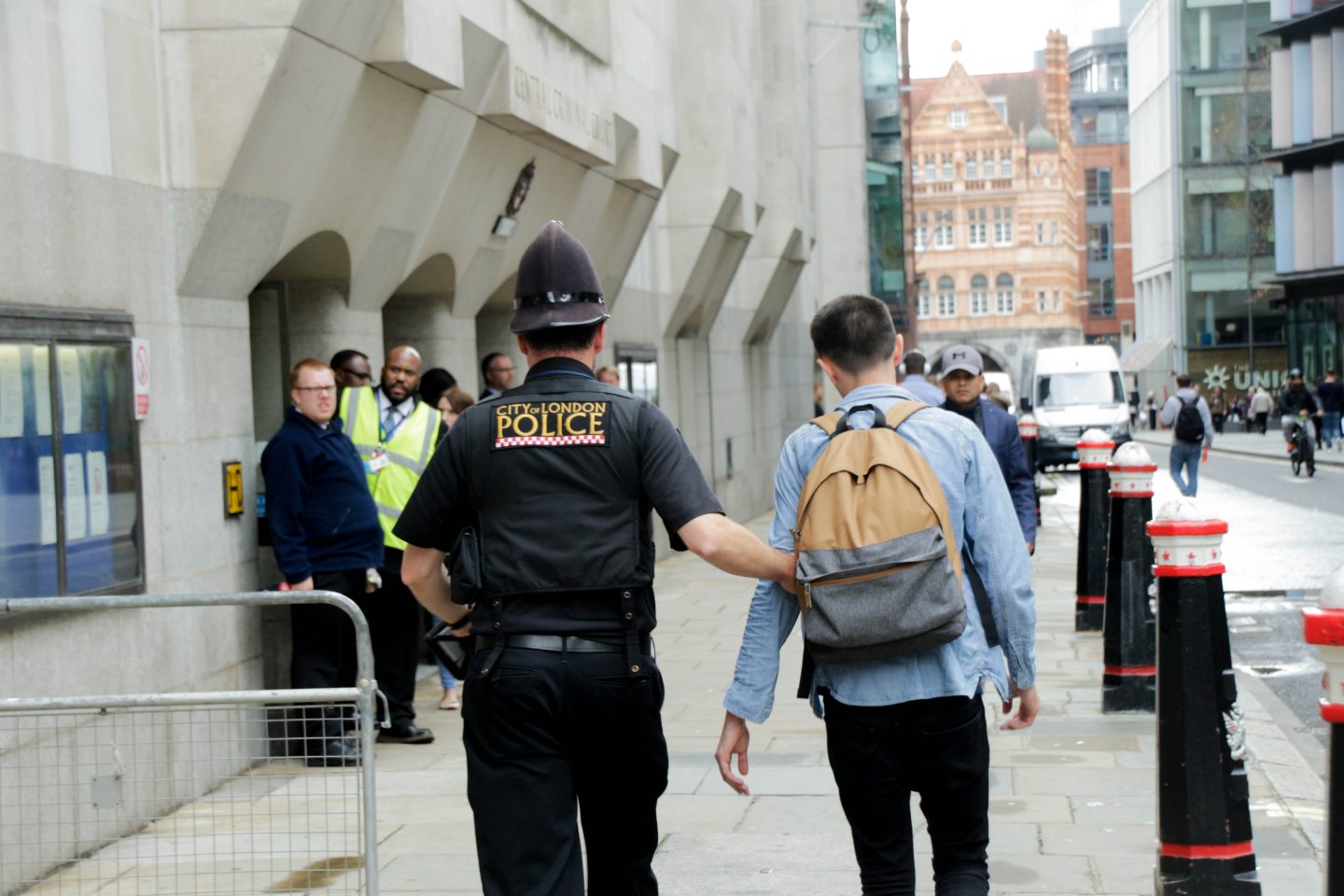 The World’s Recycling System Is Failing

One arrest was made yesterday during an Animal Rebellion protest at the Old Bailey, the Central Criminal Court of England and Wales, after a protester spray-painted the words “ANIMAL EMERGENCY = CRIME AGAINST HUMANITY” on the side of the building.

Wednesday’s action sought to bring attention to the inaction of the United Kingdom’s institutions of justice on the climate emergency in lead up to the multi-week action the group has planned in London this October.

Animal Rebellion works in solidarity with Extinction Rebellion with a special focus on ending the animal farming and fishing industries.

“The animal emergency created by these industries not only exploits and kills trillions of animals globally, it also fuels the climate emergency, which is already harming vulnerable humans and animals right now – through air pollution, drought, floods, wildfires, and by amplifying catastrophic weather events,” the group stated.

Tim Speers, the Animal Rebellion member who was arrested, said they had been thinking about whether or not to go through with the action for a few days. But the reasons were clear.

“Our government is clearly failing our planet,” he said.

In the UK, nearly 5 billion animals have been killed for food already this year. According to the latest analysis by the Sentience Institute, at least 90 percent of those animals lived their entire lives on factory farms.

Factory farming is one of the leading causes of environmental destruction and the leading cause of animal cruelty on the planet. Animal Rebellion is responding to this ill, calling for governments to lead the transition to a just, sustainable plant-based food system.

The plan for Wednesday’s action was quite simple. It was a staged action with arrest as the end goal. Speers would make his speech and then begin writing “ANIMAL EMERGENCY = CRIME AGAINST HUMANITY” on the polished stone wall of the Old Bailey.

On the morning of the action, he sat down with a bowl of leftover pasta from the night before and started rehearsing his speech. He was admittedly “a bit nervous,” mostly because this was a one-man job. So he ran lines again on the tube on the way there and stopped into the pub for a pint to clear his head.

“I’m 34 and for 32 years of my life I was consuming animal products three times a day,” said Speers. “I’ve always considered myself someone who cares about the planet, who cares about animals, but I just wasn’t aware” – until he watched Cowspiracy.

Like Animal Rebellion, the film is dire in its approach to animal and environmental advocacy. It’s full of numbers that are as terrifying as they are a very compelling reason to make a change.

Today, animal agriculture is the leading cause of species extinction, ocean dead zones, water pollution, and habitat destruction, and it’s completely unnecessary. For those of us humans living in the Western world, meat is a bad habit – a world-ending one, at that – not a necessity.

“At the end of Cowspiracy, the world seemed like a completely different place to me,” he said.

He was confused. He was angry. He was alarmed. He couldn’t sleep. He spent weeks trying to convince his friends to go vegan. Two years later, he’s a full-time activist and has been vegan for over a year.

When he arrived at the Old Bailey, it was raining, which meant he wouldn’t be able to use the stencil they were planning to stick on the wall. He would have to spray paint the side of the central court by hand.

He rattled the can a few times and began painting. People standing around immediately took notice. Some even shouted, “Hey, you know you’re going to get arrested?” But that was entirely the point. Just before Speers could finish the message, a security guard from the Old Bailey approached. He still had the “Y” in “HUMANITY” to go.

“I said, ‘Yeah, sure, just one moment,’ and I finished the Y and dropped the spray paint,” he said.

According to video footage obtained by Sentient Media, after he was asked to stop by the guard at the Old Bailey, Speers sat down peacefully and began talking to the guard. The police were then called.

“What is it that you’re doing?” asked the guard. “Nothing is going to change.”

“We have to do something,” said Speers.

This isn’t the first time Speers has dealt with the other side. During his early activist days, Speers regularly attended Speakers’ Corner, an informal gathering of like- and not-so-like-minded individuals on Sundays in London’s Hyde Park to engage in debate and public discourse.

The first sign he brought to Speakers’ Corner read, “The only honest argument against veganism is that you don’t give a shit.”

He wanted to entice people to talk to him, but people were getting distracted by the wording, so he changed the sign. This time is read, “The only honest argument against veganism is that you don’t care.”

There’s no solution in not caring. The writing is on the wall. The destruction caused by the animal farming and fishing industries is a crime against humanity. For speaking truth to this crime, Speers was arrested. He barely had time to finish painting.

“Everyone’s got their part to play,” he said. “I’m just a concerned citizen. I can’t sit by while this happens.”

No charges have been filed yet. He was released on bail late Wednesday night. The Rebellion begins October 7.