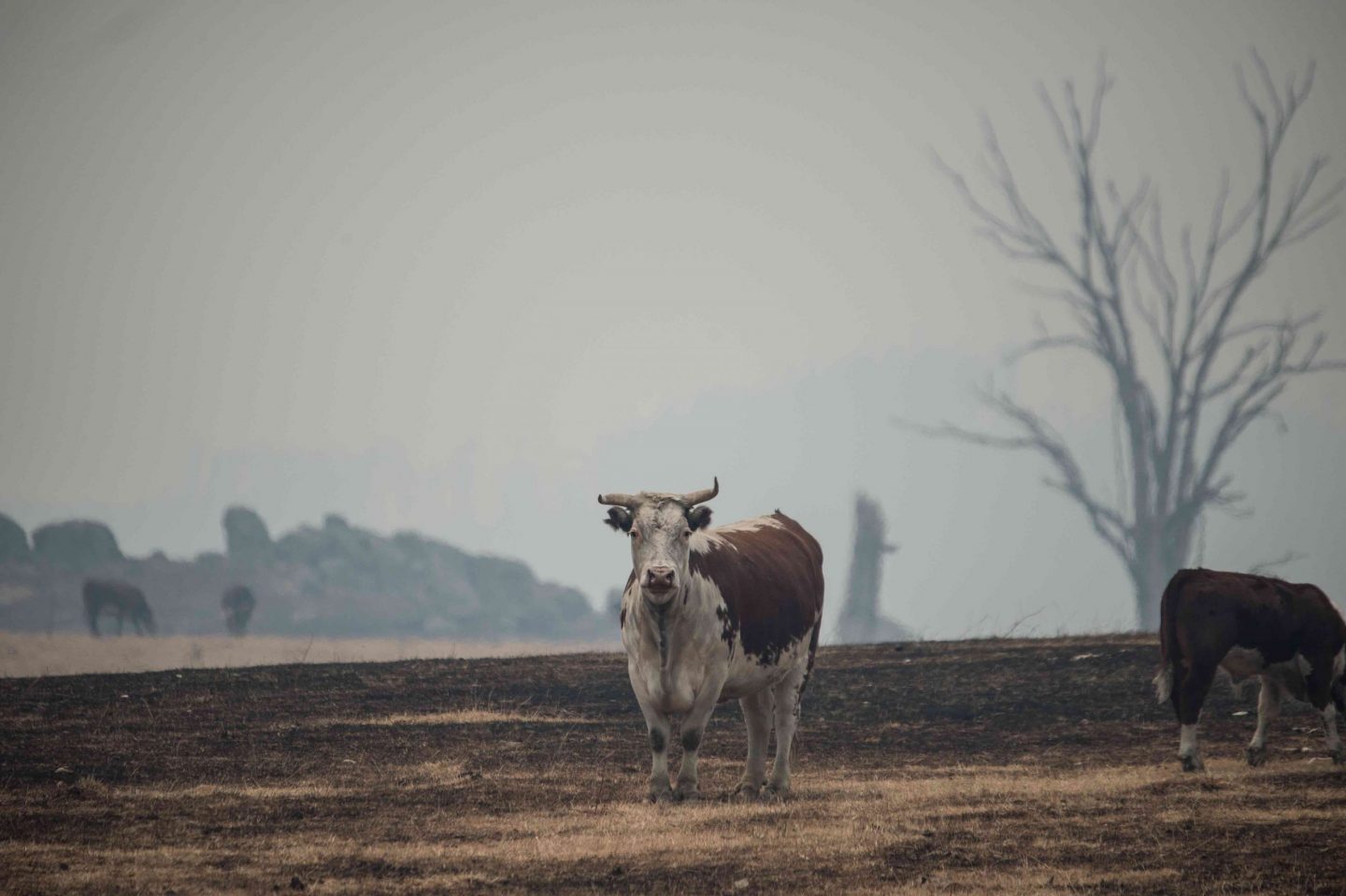 The Australia fires, which began in late October, have burnt more than 26 million acres. They are concentrated in two southeastern Australian states, Victoria and New South Wales, where about 50 million farmed animals are held every year.

Earlier this month, veteran photojournalist and animal investigator Jo-Anne McArthur and her team at We Animals Media spent 10 days on the ground in Australia, covering the devastating impact the recent wildfires had on farmed animals and wildlife. McArthur’s photographs show the farmed animals living in the aftermath of the fires, as well as the ones who did not make it.

For Australia’s farmed animals, in particular, telling their stories during times of such great need has been a major challenge. The country is large, and the burned area is vast. Despite recent rains in Queensland, Australia’s third-largest livestock producing state, there are still more than 80 fires burning across the country.

There is no word on how many farmed animals survived the blaze. Current estimates for the total number of animals lost in the fires exceed one billion.

Sheep are left to graze on scorched land in the Buchan area. They are by far the country’s most populous farmed animal. Australia farms 75.5 million sheep per year, second only to China.

Buchan is a rural town in the southeastern corner of Victoria. The area was previously home to all different kinds of wildlife: kangaroos, brush-tailed possums, and hundreds of species of birds. The green rolling hills have all but disappeared, replaced with blackened earth and charred kanooka trees.

This photo was taken near Corryong, a small farming town between Melbourne and Sydney. When fires swept through the region in late December, farmers were forced to abandon their animals. Many animals are still unaccounted for. Others are being sold off at auction because farmers cannot afford to keep them alive.

At this sale yard in New South Wales, animal sales are much higher than usual. Sheep sales are up 8 percent, and cow sales a massive 56 percent higher.

In many parts of Australia, farmers are struggling to find food available for farmed animals. This year was Australia’s driest on record, putting crop yields at a three-year low and making animal feed harder to come by. The fires have destroyed the rest of the food. Because the animals would otherwise starve, farmers are selling their animals to other farms or sending them to slaughter early.

Dairy cows are suffering immensely from the fires. In many cases, the fires have melted their teats closed and caused severe hoof injuries, leaving the animal in intense pain and rendering them “unusable” to the farmer, so they are slaughtered.

Dairy Farmers Australia told BBC around 70 dairy farms were hit in this year’s fires, including 20-25 each in New South Wales and Victoria, and 12 more in South Australia. One farmer reports he lost up to 20 percent of his cows. Road closures are stranding the rest of the herd without feed.

During the investigation, McArthur captured several images of the fire victims, like this sheep who was found near Buchan. Agriculture Minister Bridget McKenzie estimates at least 100,000 sheep and cattle will be lost in this season’s fires. But some did survive.

This is Phoenix, one of the two calves rescued from the fires. She is seen here being bottle-fed by one of the staff at Edgar’s Mission, a 153-acre farm sanctuary one hour north of Melbourne.

Investigators Followed a Livestock Truck for 32 Hours. Here’s What They Found.

Museum Exhibition Raises Awareness About the Lives of Cattle