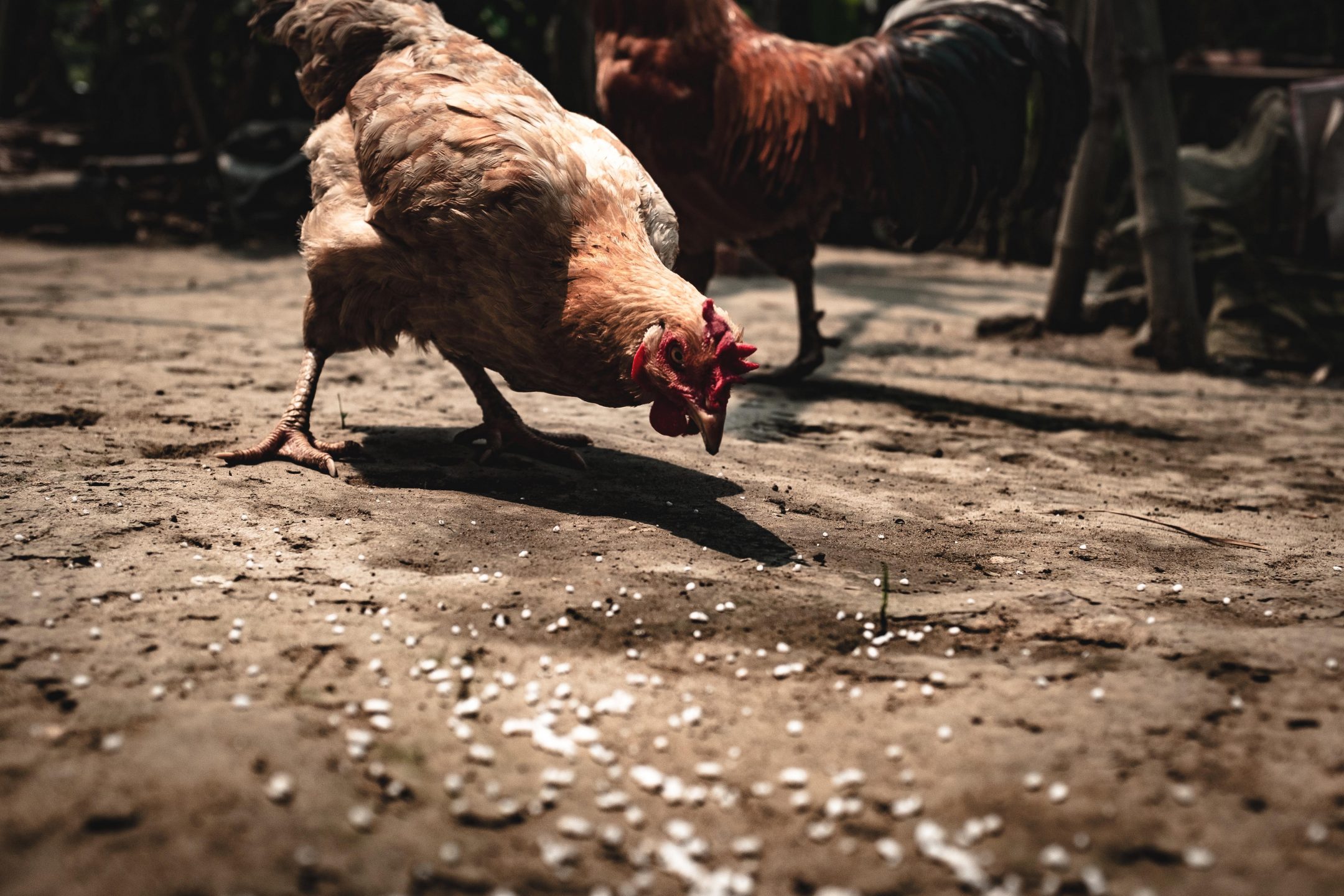 There’s a foul smell wafting over Somerset and Wicomico County on Maryland’s Eastern Shore. Just over 150,000 people call the two counties home at the southern tip of the peninsula where the Potomac River meets the Chesapeake Bay. Despite the relatively small population, Somerset and Wicomico residents have some of the worst respiratory health rates in the state.

The lifetime asthma rate in Somerset County is 21%, compared to the statewide rate of 12%. In Wicomico County, 1 in 4 children can expect to be diagnosed with the disease, both according to research conducted by the Maryland Asthma Control Program, but there’s something else unique about this part of Maryland.

The residents share their neighborhoods with chickens—millions of them. In Somerset, there are as many as 95 chicken houses within a three-mile radius, according to InsideClimate News.

Housing and producing chickens is a dirty business.

Meg Robbins, the Maryland organizer for Food & Water Watch/Food & Water Action, says harmful chemicals like hydrogen sulfide and ammonia from manure collect inside the concentrated animal feeding operations (CAFOs) housing chickens. When industrial fans used to cool the chickens and provide fresh air are turned on, those dangerous agents are then blown out of the houses and into the surrounding community.

Research compiled by the CAFO subcommittee of the Michigan Department of Environmental Quality in 2006 showed a decrease in lung function among poultry house workers from constantly inhaling small particle byproduct from their workplace.

More than 15 million broiler chickens live in Somerset, according to a 2012 Census of Agriculture profile. The county is the number one producer of poultry in the state with an estimated value of $191,990,000. It also has one of the highest concentrations of chickens compared to any other county in the U.S. Poultry giants like Perdue and Tyson all have roots there.

With chicken CAFOs sprouting up all over the Maryland Eastern Shore, so are respiratory illnesses.

Somerset has some of the highest rates of lung cancer in the state. For every 100,000 residents, 97 are expected to contract a form of lung cancer compared to the statewide average of 56 per 100,000, according to a report from the Business Economic and Community Outreach Network at Salisbury University.

Chronic Pulmonary Obstructive Disease is higher in Wicomico than anywhere else in Maryland. Wicomico also happens to be the 25th largest poultry producing country in the country.

“These CAFOs are going up next to senior centers, next to daycares, next to communities and the proximity of one of these chicken houses to a person’s house is just shocking, it’s right across the street,” says Robbins, who just prior to our conversation spoke with a concerned citizen who watched a farm across from her house grow from two large chicken houses to 10 over the past decade.

The closer you live to CAFOs, the greater the risk of respiratory illness.

Research shows that the air quality in areas surrounding industrial chicken farms is poor at best and is usually infused with chemicals. Children are more susceptible to health complications from toxins produced by chicken houses because they take in 20-50% more air than adults, according to The National Association of Local Boards of Health.

“In environmental health, all children are a vulnerable population because their system and bodies are still developing. They eat more food, drink more water, and breath more air compared to the size of their bodies,” says Dr. Jillian Fry.

Fry is the Project Director with the Seafood, Public Health & Food Systems Project at the John Hopkins Center for a Livable Future in Baltimore. She was also one of seven doctors and professors whose signature can be found on a 2016 letter to Lori A. Brewster, a Health Officer at the Wicomico County Health Department, summarizing the research surrounding the public health concerns that arise from an expanding poultry industry in Wicomico, Somerset, and Worcester counties.

The letter details the types of pathogens that exist around industrial livestock operations and how they can infect workers, as well as the airborne toxins such as ammonia, particulate matter, endotoxins, and microorganisms that have been discovered in air samples around CAFOs. All are harmful under constant exposure.

While it’s not known for sure if chicken houses are contributing to the rise in respiratory illnesses on the shore, the evidence suggests its worth further research.

The Maryland Department of the Environment currently does not monitor any emissions from industrial farming operations.

“Any increasing rate in the population of respiratory disease is certainly a very worthwhile endeavor,” says Fry. While she acknowledges that this type of research is difficult, it will identify if there are growing populations suffering from chicken house pollution. The elderly, those with chronic illnesses, and children are the first at risk.

The letter was an effort to raise awareness among health professionals and lawmakers about the hazards of the expanding poultry industry on Maryland’s Eastern Shore. However, minimal steps have been taken since its release to investigate the issue. In fact, the opposite has happened.

This past April, the Community Healthy Air Act failed to reach a vote. The bill has been a two-year effort from concerned residents to require the Maryland Department of the Environment (MDE) to conduct a one-time study to identify air pollutants emitted by CAFOs, assess any potential public health harms, and report the findings to the Maryland General Assembly.

The study would not require poultry companies to submit to any new regulations and would be of no cost to Eastern Shore farmers. The MDE currently does not monitor any emissions from industrial farming operations.

The bill was born out of genuine concern from those who live their lives surrounded by chickens. According to Robbins, community members from Wicomico, Somerset, and other Eastern Shore communities approached their local governments asking them to investigate emissions from chicken operations and the effect they are having on community health.

The requests were largely ignored. What made the response even stranger, says Robbins, was that county officials used industry talking points write off the idea. One such talking point is that there’s no correlation between the livestock industry and health effects and that undertaking such research would be a waste of taxpayer dollars.

From there, the issue was taken to the state level, where it has been debated fiercely by lawmakers, lobbyist, residents, and farmers. The Community Healthy Air Act would conduct its research by way of an independent committee of eight experts in the field of regulatory compliance, air pollution sampling, statistics, toxicology, and epidemiology. This research became the major point of contention.

Critics of the legislation felt the science would inevitably be political in its findings as Delegate Charles J. Otto (R), of Somerset and Worcester counties, put it during a February 7th hearing reported by the Baltimore Sun. “So is this the conclusion of the study: we want to do away with these chicken houses?”

The fear of more research into air pollution is really a fear of more federal regulation for chicken farmers.

Representatives of Johns Hopkins University Bloomberg School of Public Health told lawmakers at the same session that there would be no conclusion made from the monitoring plan—just research. The study would then be subjected to peer review and public comment before any further actions could be taken.

But fear bubbled over. The fear of more research into air pollution is really a fear of more federal regulation for chicken farmers. Currently, the Environmental Protection Agency (EPA) does not set emission standards for poultry farms.

The threat of regulations has been the bogeyman of the chicken industry for years. When faced with similar legislation in North Carolina, the North Carolina Poultry Federation told NPR new regulations would hurt the industry and the state economy.

Delegate Otto is a member of the Delmarva Poultry Industry (DPI), a 1,800-member trade organization working toward “the common good of the chicken meat industry.” Companies such as Perdue and Tyson have representatives that sit on the DPI’s Board of Directors. Otto also serves as president of the Wicomico County Farm Bureau.

Jacob Day has been the Mayor of Salisbury, Maryland, a major transport hub for the poultry industry, since 2015. He is the son of Randy Day, CEO of Perdue Farms.

There’s really only one way those living in Wicomico and Somerset can challenge the domination of big poultry in local politics, and that’s by going to the polls. When the ballot boxes open this fall, residents will have the chance to elect officials with clean air in mind.

“A lot of this will be decided by the voters,” says Robbins. “It’s definitely an issue people are talking about.”

A New Bill Aims to Counteract a Decades-Long Trend: The Decline of the Black Farmer