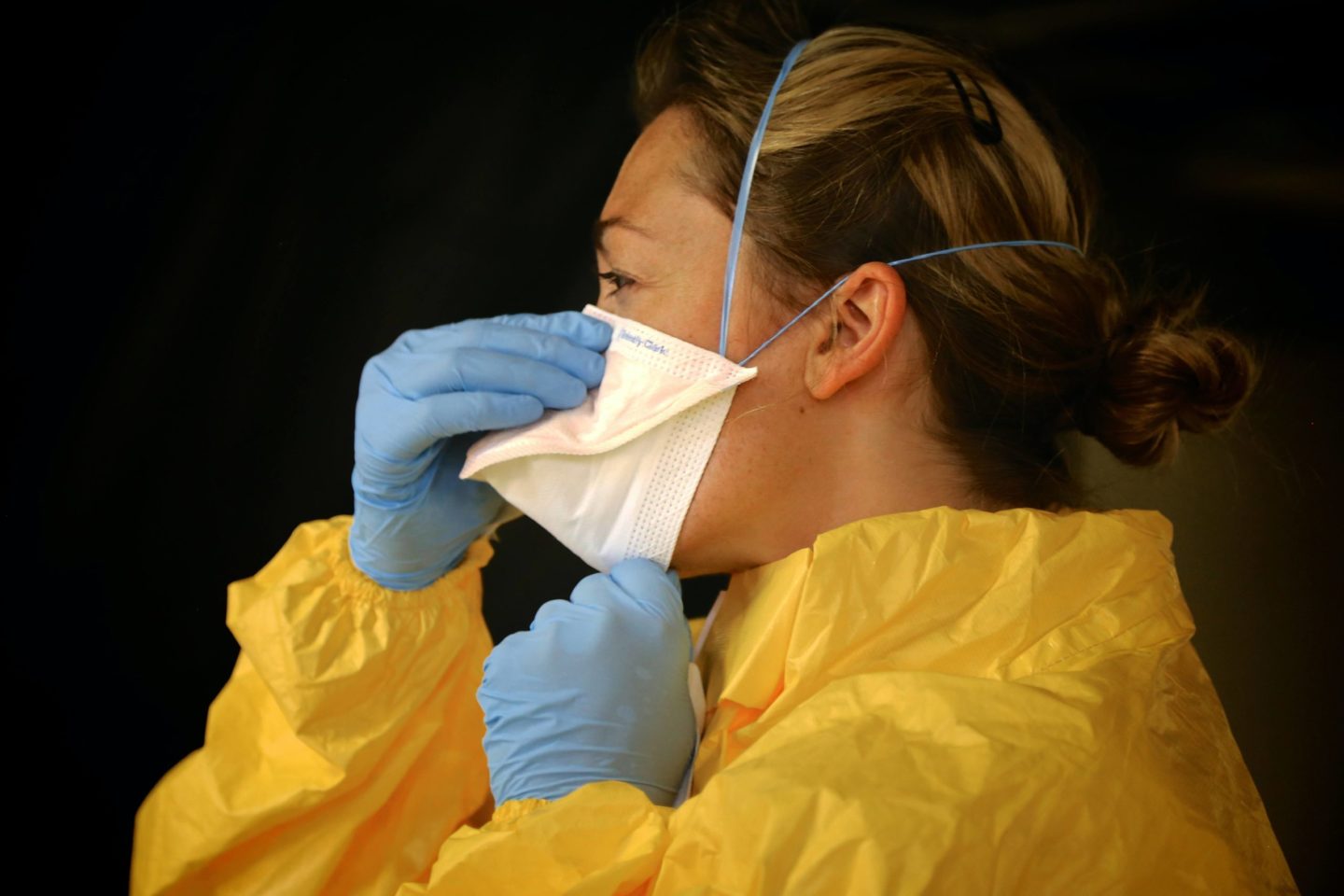 VIDEO: How to Prevent the Next Pandemic

Imagine workers taking off their work clothes. They untie their aprons. They disinfect and remove their boots. They peel off their coveralls and gloves. The workers wash their hands with soap before and after discarding their goggles and respirators. Then they take showers. What reads like the daily routines of medical staff fighting COVID-19 actually describes the recommended safety protocol of a wholly different group: poultry farm workers.

While nations compete over medical supplies, many non-medical sectors continue to use the same personal protective equipment (PPE) as medical professionals. 3M, a Minnesota-based company, was recently embroiled in international controversy when President Trump tried to stop the corporation from selling its respirators outside the United States. Yet, medical workers requiring now-scarce PPE also face competitors within their own countries. Construction, pharmaceutical, and agricultural companies all use respirators to protect workers’ lungs from harmful substances. In the U.S., 3M currently sells 90 percent of its respirators to healthcare facilities. The remaining 10 percent is divided among food, energy, and pharmaceutical companies. Some agricultural trade companies wishing to stay anonymous continue selling PPE supplies only to farmers instead of supplying healthcare facilities. With the availability of medical masks in such short supply and hospitals’ demand for masks dramatically increased, respirators need to be sold only to truly “essential” industries—which excludes factory farming.

COVID-19 is not the first pandemic caused by humans’ consumption of animals. The coronavirus likely originated at a wildlife market selling freshly slaughtered meat, yet factory farms also produce pandemics by breeding and crowding animals that carry pathogens transmissible to humans. Among these pathogenic viruses are H5N1 and H1N1, commonly referred to as “swine flu” and “bird flu,” respectively. H1N1 killed 50 million people during the 1918 Spanish Flu pandemic and at least 284,500 more during a second outbreak in 2009.  H5N1, newly emerged, has infected 861 people to date and killed more than half of them. In light of recent outbreaks of bird flus in Germany and China and bird and swine flus in India, combined with the spread of COVID-19, a global supply shortage of respirators is exponentially alarming. Even if factory farms agreed to forgo using PPE for the benefit of healthcare workers, doing so would risk the spread of other dangerous zoonotic diseases.

Had governments shut down, or at least reduced, the activities of factory farms as they did for so many other industries deemed “non-essential,” the health of farm workers would be protected, and the risk of future pandemics would be reduced. Perhaps most crucially right now, more respirators would be available to healthcare workers. The U.N. biodiversity chief and some governments, including those of Australia and the U.S., are demanding bans on the consumption of wild animals to prevent future pandemics—but remain silent on the epidemiological risks of farming animals. Calling the wildlife trade a danger to public health while treating factory farms as “critical infrastructure,” in the face of a pandemic caused by humans’ exploitation of animals, is nonsensical at best, hypocritical, and life-threatening at worst. The devastating spread of COVID-19 unequivocally demonstrates that humans need to shut down all industries that integrate the constant provocation and ineffective containment of pandemics into their daily operations.

Factory farms require their staff to dress like medical staff during a pandemic because animals crammed in dark enclosures create ideal breeding grounds for disease. Dust in factory farms commonly includes fecal matter, animal parts, litter, yeasts, spores, molds, viruses, and bacteria. The Irish Health and Safety Authority estimates that 70 to 90 percent of pig farm dust is biologically active, putting workers on these farms at high risk of developing respiratory problems. Poultry houses contain high levels of ammonia and other inflammatory substances, which can cause headaches, nausea, coughing, and other acute or chronic diseases. The matter-of-fact way in which health authorities like the National Institute of Occupational Safety and Health, which sponsors the National Ag Safety Database, and the Centers for Disease Control and Prevention suggest respirators as a “solution” to the pathogenic air brewing in factory farms is startling and wholly inadequate. No industry should expect its workers to daily risk their health in human-made petri dishes known for cultivating dangerous pathogens.

Factory farm workers often belong to vulnerable groups that lack other or better job prospects. Many are migrant workers, which explains why agricultural associations across the world are beleaguering governments to exempt seasonal workers from COVID-19 travel bans. The National Pork Producers Council (NPPC) complained about labor shortages due to travel restrictions on Mexicans and rejected the idea of employing more local citizens, claiming ironically that U.S. residents rarely live near pig farms and packing plants. This assertion by the NPPC diverts attention from the fact that few people are willing to work in places that systematically endanger their health unless they are caught in financially or socially dire situations. In addition to the usual deplorable working conditions, factory farm workers now also face the risk of contracting COVID-19. Three major U.S. meat processors, Tyson Foods, JBS USA, and Smithfield Foods, failed to equip workers with adequate protective gear following the COVID-19 outbreak; the virus has since spread rapidly within some factory farms. These three meat-processing companies, following the facility outbreaks, have shut down 15 processing plants, but not before a Tyson poultry worker died from the virus; her employer had pressured her to return to work despite her feverish condition. An industry reliant on the exploitation of vulnerable groups does not deserve crucial and scarce equipment that only serves to perpetuate an inherently disease-ridden system.

What renders the status of factory farming as “critical” or “essential” even more unwarranted is the fact that the production of milk, dairy, and eggs is absurdly wasteful and crisis-prone. Animal agriculture uses 16 percent of global fresh water and almost 80 percent of global agricultural land, but only contributes 17 percent of calories to the global human diet. Factory farms have relied upon government subsidies for decades to keep the animal agriculture industry afloat. COVID-19 is further exposing the fragility of a government-funded industry that produces highly perishable food in excessive quantities. During the first week of April, U.S. dairy farmers dumped at least 35 million pounds of milk due to falling milk prices and food service disruptions, which were caused in part by restaurant closures. A dairy cooperative advised dairy farmers to send otherwise-healthy cows to slaughter to keep costs down during the pandemic, and a chicken processing company killed two million chickens in response to virus-related staff shortages. An industry that deals with a global crisis by destroying its products and unnecessarily killing animals does not contribute to a sustainable food system. Factory farms should not receive even more tax money, especially when that money could be used to provide life-saving supplies to medical personnel.

Animal products—meat, dairy, and eggs—are not essential or crucial to human health. American and Canadian expert nutrition associations approve of strictly plant-based diets, and a growing number of plant-based meat and dairy alternatives have become available in recent years. A vegan diet provides all essential nutrients except for Vitamin B12, which consumers can easily supplement in capsule, spray, or liquid form. Pathogens are not prevalent or problematic on plant-based farms; as such, maintaining the operations of plant-based farms in the face of medical supply shortages does not create the catch-22 predicament of having to choose between managing an ongoing pandemic and preventing likely future ones. Plant-based farms also use respirators—as protection against dust, pollen, and pesticides—but only on a limited basis. Farming grains, vegetables, fruits, and other plants ensure the stability of the food supply without increasing the risk of pandemics.

Animal agriculture representatives seem to be aware, at least somewhat, of the problems that the factory farming industry creates. In late March, the president of the Iowa Pork Producers Association asked pork farmers to donate respirators to healthcare providers. Some trade companies that previously sold respirators to animal agriculture companies are prioritizing hospitals, funeral homes, and nursing homes over their regular customers. While these actions are admirable, trade companies and farming associations should not be the ones deciding who receives rare, life-saving equipment, and who does not. From environmental, ethical, and epidemiological perspectives, it is reprehensible to permit animal agriculture companies to risk causing future pandemics while simultaneously taking vital resources—natural and otherwise—from those who urgently need them.

Antibiotic Resistance and Animal Farming: What You Need to Know