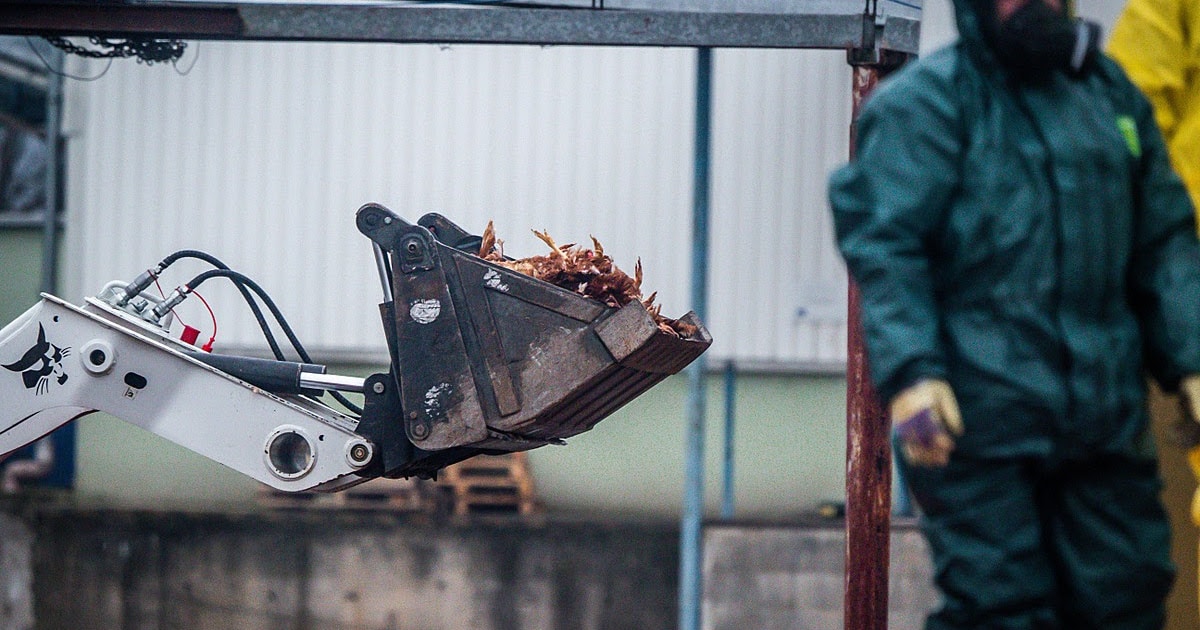 The first human case of avian flu was confirmed in China last week. But over the past three months, millions of birds have died. The ongoing bird flu global outbreak has resulted in the culling of tens of millions of birds all over the world.

The highly contagious virus was detected in the U.S. in January of this year, and since then over 39 million captive and wild birds across 36 states and 376 flocks have been exposed to avian flu as part of the ongoing outbreak, according to the U.S. Department of Agriculture’s (USDA) Animal and Plant Health Inspection Service. Now, entire flocks are being culled for fear they might spread the disease to others.

Over the past six months, poultry producers have culled millions of animals to contain the spread of avian flu with relative ease, but the final steps in the federally monitored biosecurity process—safely disposing of the dead birds and implementing effective safety measures to prevent the next outbreak—prove to be a significant challenge.

At a commercial egg production facility near Fort Collins, Colo., 1,928,000 birds were exposed to avian flu, according to local health officials. The new data represents the fifth-largest single-day outbreak since the virus was first detected on U.S. farms in January.

While new infections have slowed, poultry producers are just starting to feel the effects of the outbreak. Earlier this week, Jennie-O reported delays in its turkey supply chain due to the virus, forcing parent-company Hormel to narrow its earnings forecast for the year.

Infections on U.S. poultry farms slowed this week, but scientists are worried that the virus may now be spreading in wild animals, making it even harder to contain. Only two cases have been reported in humans thus far.

As infections continue to rise, the industry is drumming up its own response to the deadly virus. Researchers believe that they can improve biosecurity measures and “lessen the risk of disease spread between flocks” by employing robots instead of people at poultry facilities.

Pennsylvania continues to report record numbers of infections. On Tuesday, May 17, officials confirmed that 70,000 birds were exposed to avian flu at an egg-laying facility in Berks County. More than 4.2 million birds have now been affected statewide.

On Saturday, May 14, Pennsylvania saw its 13th flock infected with the avian flu virus. Officials confirmed that more than 83,000 birds were exposed, and experts believe the overwhelming majority will be culled as a result of the suspected infection.

The bulk of new infections came from a commercial turkey farm in Barron County, Wisconsin, where 20,000 birds were exposed. Earlier this year, more than 46,000 turkeys were culled after bird flu was detected on a turkey farm owned by Jennie-O in Barron County.

The terms ‘culling’ or ‘depopulation’ are often used by the agriculture industry to refer to the intentional killing of farmed animals. It is often the immediate, knee-jerk answer to contain a disease outbreak that impacts non-human animals. But advocates say the practice often causes “extreme suffering” for the animals involved.

“They cooked those birds alive,” one of the workers that helped cull 5.3 million chickens at an Iowa egg farm in April told the Guardian.

Unlike the shorter bird flu outbreak of 2015, which saw over 50 million birds culled in the U.S. within a six-month timeframe, the World Organization for Animal Health (OIE) records indicate that the most recent outbreak of bird flu began in late 2019 in Africa and Asia, and since then recurrent outbreaks have resulted in multiple countries culling tens of millions of captive and wild birds periodically over the past two years.

To stop the spread of infection, an aggressive approach towards culling is undertaken and pre-emptive culling⁠—when animals are culled before they are infected⁠—is often used as a cautionary measure. But despite the large-scale culling of infected and uninfected birds, the current outbreak continues.

Sentient Media has been tracking the outbreak of avian flu for over a year. In early January 2021, Claire Hamlett reported that while wild migratory birds have been blamed for the current outbreak, official reports on bird flu paint an incomplete picture when they fail to identify intensive agricultural practices and the live transport of poultry bred for meat and dairy that contribute to the spread of bird flu.

Given the inability of mass cullings to contain outbreaks for more than a few months at a time, the poultry industry’s plan to cull its way out of the current crisis and return to business as usual is in question.

What is avian flu?

Avian flu, or pathogenic avian influenza, also known as bird flu, is caused by a family of viruses carried by wild water birds such as ducks, geese, and swans. Historically, wild birds have been more resilient to the infections from the virus, while the virus has been lethal for captive birds, such as farmed chickens, hens, and turkeys.

The virus spreads from bird to bird via contact with bird droppings, feathers, mucus, and saliva. The packed and stressful living conditions of birds in factory farms make chickens and turkeys more susceptible to the virus and infected birds suffer from diarrhea, lethargy, and a lack of appetite, along with the swelling of their eyelids and head before they eventually die, often within 48 hours of contracting the virus.

Each year over 10 billion chickens, 300 million egg-laying hens, 24 million ducks, and a quarter billion turkeys are bred in cramped, filthy industrial farms, which are hotbeds for zoonotic diseases like avian flu. The ongoing outbreak that began in late 2019 is fueled by a highly pathogenic avian influenza virus that experts believe originated in wild geese, although they have yet to determine its specific originated or how it spread through the food system. The current outbreak has led to the culling of wild swans, geese, herons, and even bald eagles in the U.S.

This is not the first time avian flu has reached pandemic levels. Research shows that it was a potent combination of genetic material from both human and bird flu viruses that combined to create the highly contagious Spanish flu virus of 1917. While the current outbreak’s threat to humans remains low, the mass culling of millions of birds on an industrial scale has continued unabated in an effort to contain the spread of the virus and prevent it from evolving into a more lethal variant that could infect humans.

Why are birds culled?

Even in the absence of a pandemic, culling is a part of the day-to-day operations on farms where pigs, cows, and birds are raised for meat and dairy products. For example, in any chicken farming operation, male chicks are considered “non-productive” as they cannot lay eggs and are not considered good meat producers. As a result, approximately seven billion male chicks are killed every year.

Gassing, suffocation, electrocution, and maceration are some of the different industrial-scale culling operations that farms put in place to protect their bottom line. For backyard farms or small agricultural operations, cervical dislocation, in which the neck of the bird is snapped, and decapacitation, where the head of the bird is removed via a blade, are among the more “humane” methods of culling.

However, when millions of birds need to be killed in a cost-efficient and timely manner—such as during supply chain disruptions or outbreaks of bird flu—the more humane culling methods are often overlooked.

Following the 2015 bird flu outbreak, a study sponsored by the U.S. Poultry and Egg Associations had researchers at the North Carolina State University experiment with a particularly distressing and painful method of culling that shuts down the ventilation to animal enclosures. The shutdown results in a lethal rise in temperature, causing the animals to slowly die from extreme heatstroke. Termed “ventilation shutdown” or VSD, variations of this method include piping in additional steam or gasses to the sealed enclosures that house the animals (VSD+) to hasten death.

While the USDA claims that ventilation VSD+ is “at times the only method available” to depopulate the birds in the given timeframe, undercover video footage shows it is not a fool-proof culling method. After a depopulation at Rembrandt Enterprises in Iowa, the Intercept reports activists documented numerous hens who were “still alive and left behind inside the battery cage facility.”

Editor’s note: We chose to focus on the U.S. because it is the only country that makes avian flu data available to the general public on a regular basis. However, we will continue to share updates on culls happening in other countries on our social media channels, so please check there for the latest updates.