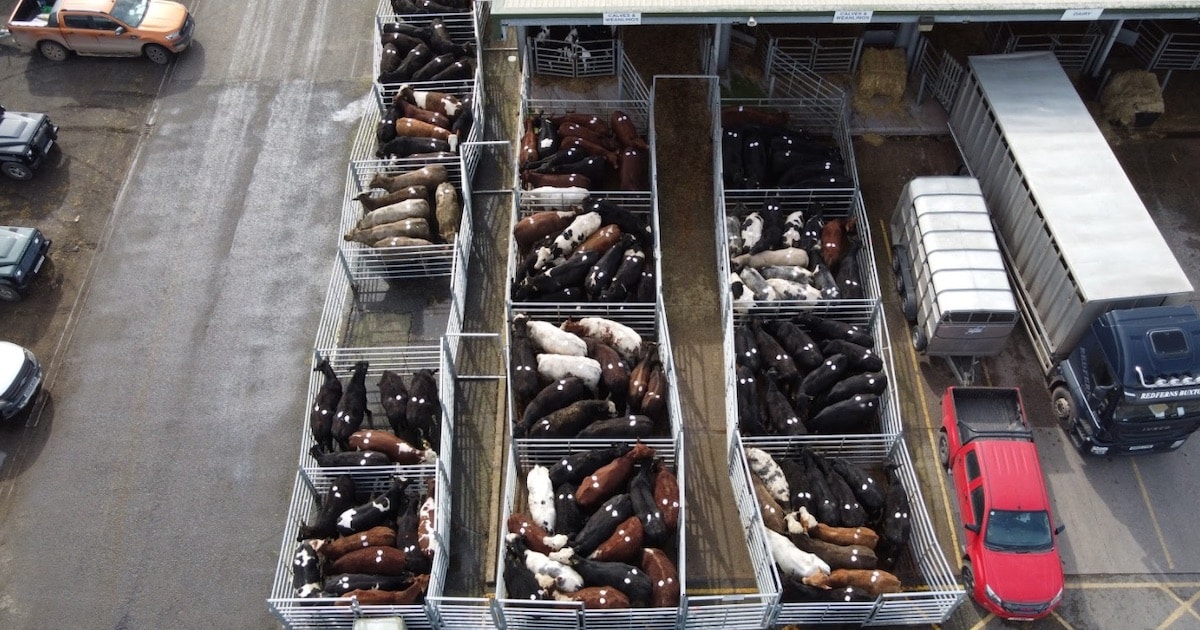 The interest in vegan and vegetarian products in the UK is on the rise, especially after consumers become aware of the cruelty involved in producing animal-based foods. However, the dairy industry has managed to fly under the radar and present itself as an ethical industry. This claim now faces the challenge of an investigation into one of the darkest corners of the dairy industry: calf dealers.

Undercover footage released by the Animal Justice Project (AJP) earlier this month shows calves as young as nine days old being kicked, beaten, and thrown at the Oaklands Livestock Centre in Shropshire, UK, that deals with dairy farmers who supply milk to a local retailer, Sainsbury’s, via the dairy giant Müller. This center acts as a major hub for male dairy calves and is owned by the renowned calf dealer, Derek Whittall.

Among the regulations violated include the Animal Welfare Act, the Welfare of Farmed Animals Act, and Council Regulation of European Union. This is also not the first infraction for Derek Whittall; he has a previous conviction for sending ineligible calves to slaughter under the government’s Calf Processing Aid Scheme.

So how did these young calves end up with Oaklands Livestock Center in the first place?

“Supermarket and industry bans prevent young calves from being shot on dairy farms. However, while farmers cannot shoot the calves, they can sell them. That is where the problem starts,” says Claire Palmer, the founder of AJP. “These collection centers, like the one owned by Whittall then send these calves as young as nine days old to either a rearing facility, or a slaughterhouse,” she adds.

Among the violations recorded at Oaklands include calves lifted by tails and pulled along by their ears; calves scared unnecessarily using plastic bags, and fragile and unweaned calves thrown and hit repeatedly. The calves were also not fed the legal requirement of two feeds per day and were kept for 21 hours without food and completely without water, which is a breach of the Welfare of Farmed Animals Act which states “all calves must be provided with a sufficient quantity of fresh drinking water each day,” and “all calves must be fed at least twice a day.”

Some young calves were also taken by Whittall to the G & Gb Hewitt abattoir in Chester. While according to the regulations outlined in Welfare At The Time Of Killing Animals (WATOK) the animals should be immediately slaughtered so as to spare them the pain, stress, and anxiety, they were left overnight at the lairage. The footage also shows that the calves were not checked by an Animal Welfare Officer, which they should have been.

The Food Standards Agency (FSA), Animal and Plant Health Agency, and Trading Standards are investigating the footage. The FSA, in particular, has released the following statement to Sentient Media:

The Food Standards Agency takes animal welfare at abattoirs very seriously and an investigation into these allegations is underway. We cannot comment on individual cases but where non-compliance with legal requirements are identified we take appropriate action in response, to prevent any further breaches.

When asked what measures have been taken for ensuring animal welfare at abattoirs, they responded by saying that they have staff present during operations and mandatory requirement of closed-circuit television (CCTV) cameras in slaughterhouses. This raises many important questions and highlights certain loopholes. Why did the FSA staff not detect this serious breach of violations through their staff on-site and via CCTV cameras? And while they have measures in place to regulate slaughterhouses, why have calf dealers, which form an important part of the dairy industry, not been scrutinized?

There also has been little to no clarity on what will happen with the investigation so far. Palmer said that the FSA is yet to ask for footage, and the agency has seldom taken action on their investigations, except in the violations by Gressingham Duck, which were largely considered to be equipment failures, not matters of animal ethics.

Meanwhile, dairy farmers associated with Müller have been instructed not to supply young bull-calves to Oaklands, and Sainsbury’s is investigating the “unacceptable practices.”

What the investigation reveals about the dairy industry

While it is easier to think that the dairy industry is not complacent and instead separate from the killing of dairy animals, this investigation says otherwise.

The industry has for years made consumers believe that dairy milk has little to no role to play in the deaths of days-old babies and spent mothers. However, this investigation reveals that the industry cannot separate itself from the killing that happens at a slaughterhouse just because they are not physically doing it themselves. They operate in an ecosystem that depends on the exploitation of cows from birth to death. They sell the milk for profits and use dealers like the Oaklands center to solve the “problem” of bulls they cannot milk and calves whom they cannot allow to spend time with their mothers. The question when it comes to the dairy industry is not if the cows go for slaughter, but when.

In this particular case, Derek Whittall revealed that these dairy calves often become kebabs and pet food. However, further research by Sentient Media has also revealed another shocking fact — the widespread use of the skins of these calves for leather. Paper receipts obtained by AJP’s undercover investigator show that after being slaughtered at the Chester abattoir, the skins were sold to the Central Hide and Skin Company in Derby. This establishes a crucial link between popular leather products in the market and commonly used dairy products. It is a link that is also important for consumers to understand just how deeply connected these processes are.

The footage also reveals the distant, compartmentalized way in which animals are viewed and hence treated. The workers constantly hurl abuses on the calves, even though all the calves are doing is trying to move around their fragile bodies that have been deprived of the essential nutrition that they need to sustain life.

It is imperative to ask why the dairy industry should be excused of these consequences just because the acts did not happen directly on their farms. It is also important to understand the underplayed role of calf dealers in connecting various segments of industries dependent on the exploitation and slaughter of young bull-calves.

The ever evangelical, magical facade that the dairy industry puts up is not able to hide the overt links that it has with the suffering and abuse that takes place after animals leave their farms.