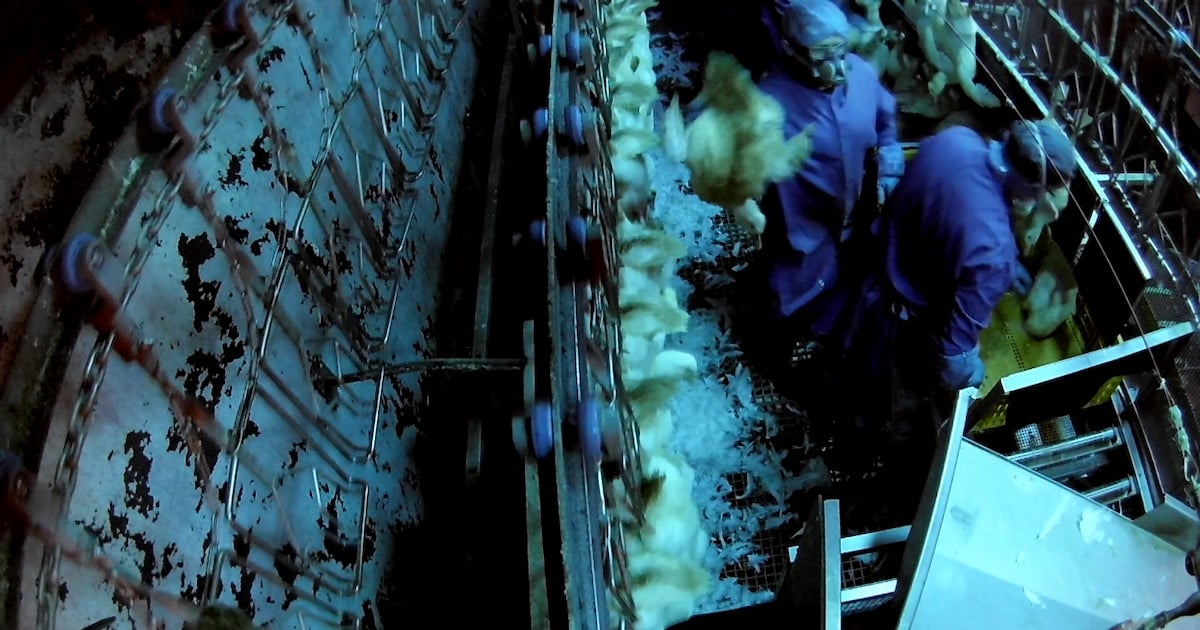 Coronavirus: Did Animal Agriculture Cause COVID-19?

With the “rule of six” likely to govern family dinners this Christmas, reports have suggested that people will demand smaller ducks on their tables. However, footage from a recent investigation has revealed a series of abuses in the UK’s largest duck slaughterhouse, Gressingham Duck, that will warrant people to think twice about what they eat this holiday season.

The footage shows that several regulations, including guidelines issued by the UK government to adhere to EU standards and the Welfare At The Time Of Killing Animals (WATOK) regulations were breached. The Food Standards Agency (FSA) has since suspended the slaughter licenses of several of the employees at the Gressingham Duck facility.

“Violence and oppression are at the heart of this industry,” says Claire Palmer, the founder of AJP. “There is no ‘right’ way to go about killing animals who don’t want to die.” She goes on to explain just how little the industry appears to care about everyone who enters the slaughterhouse doors. “Workers too are paid minimal wages and work at high speeds, in often unsanitary conditions,” she says.

Gressingham Duck started as a family business, founded by Maurice and Miriam Buchanan. The reigns of the company were soon handed over to their sons, who have managed to stay on top owing to large corporate investments in several other enterprises. However, animal cruelty and welfare violations did not escape this family setup.

It is important to note that Gressingham Duck is particularly esteemed, as far as duck producers go, having been associated with many royal events at Buckingham Palace. The Crown-approved duck producers, as well as others throughout the country, have been questioned for their welfare standards in the past. Organizations like the Royal Society for the Prevention of Cruelty to Animals (RSPCA) go as far as to advise people not to consume any ducks produced in the UK, due to repeated violations of its welfare standards for farmed animals.

This investigation reveals how highly stressful environments can lead to workers fighting among themselves. As the video shows, the ducks also felt the impact of the heightened levels of aggression by being held from their necks and rammed into the shackles. Birds hung upside down on the shackles were left hanging for fourteen minutes—which not only violated the official two-minute limit but could have possibly caused leg fractures.

The video shows that the ducks also kept hitting a metal bar, placed below the shackle line. Being shackled side-by-side also meant that the ducks were touching each other. The guidelines state that birds are not meant to touch each other or other objects to avoid electric shocks and killing themselves before being stunned.

AJP also found dead ducks in crates upon arrival. The investigator watched as they were thrown into a chute without having their vital signs checked.

Even the legal methods of slaughter that the AJP investigator witnessed at the Gressingham facility, including live shackling, raise serious welfare concerns. Findings by a report by the Farm Animal Welfare Committee state that live shackling causes both physical and mental distress to birds. Shackling leads to bone fractures and joint dislocation. The inverse position while hanging also leads to emotional stress. Shackled to the line, birds flap their wings violently trying to escape.

The electric water bath used to stun ducks by Gressingham Duck has also been widely criticized. The European Food Safety Authority notes in one of their reports that this method seldom works because of “swan-necking,” a physical condition that prevents the birds’ heads from hitting the water. Because of this, ducks at Gressingham and across most of the industry are susceptible to electric shocks before stunning or may not even be adequately stunned before slaughter.

Not the first infraction for Gressingham Duck

This is not the first time that Gressingham Duck has been in the news for the wrong reasons. In 2017, they culled about 55,000 ducks after a bird flu outbreak at their facility. And in 2019, their duck farm in Norfolk came under scrutiny after the AJP went undercover to film ducks and ducklings crying in distress and unable to get up. Their footage also revealed inadequate water sources for ducks, and workers with no gloves or protective cover.

At that time, Gressingham Duck had strongly denied the allegations, though a spokesperson had admitted that there were a “limited number of images and comments that are not representative of the high standards expected of our farms.”

While Gressingham Duck did not respond to our requests for a comment, the FSA, among other things said:

The Food Standards Agency takes animal welfare breaches very seriously. An urgent investigation is underway and we will examine the CCTV evidence closely.

Sentient Media also obtained audits conducted by the FSA at all meat production sites from 2014 to 2020. A careful analysis of the data shows that as recently as November 1, 2020, the Gressingham slaughterhouse was found to be compliant with all welfare standards, even though footage from the AJP suggests otherwise.

Gressingham Duck facilities have been violating welfare standards since at least 2014. The most significant violation reflects the inability of Gressingham to clean the animals before they were slaughtered. Gressingham repeatedly failed to set out procedures to avoid the contamination of recently slaughtered carcasses from dirty animals.

The audits have also noted minor and sometimes major violations to keep animal by-product containers leak-proof, closable, in sound condition, cleaned, and disinfected as often as necessary to protect human and animal health. The audits also indicate that until at least 2019, Gressingham Duck did not have a designated Animal Welfare Officer (AWO) for ensuring compliance with welfare regulations.

Red Tractor, a local farm assurance scheme, also responded saying that a trained veterinarian surgeon is now on-site to ensure compliance to legal requirements around animal welfare. However, investigators from AJP saw no vet at the slaughterhouse while filming, nor was anyone called to treat injured ducks.

Aggression and racism in the slaughterhouse

The investigation not only flags non-compliance to welfare standards but raises larger questions of the effectiveness of these standards in the meat industry. Released and unreleased footage aptly depicts the fast-paced nature of the work. The workers are tense and under the observation of a supervisor who constantly reminds them of the clock. There is no time to breathe—all the ducks have to be shackled as fast as possible. And the screams of distressed ducks become background noise to frequent outbursts among the workers.

Racism is rampant, with one worker repeatedly shouting at another one, saying, “you f****** black f****** s***!” All the yelling and shouting happens as the ducks are held by their necks and rammed into the shackles.

“It is a difficult job,” says Pete Paxton, a leading animal welfare undercover investigator. “They work 6 days a week, 12 hours a day, with sleep deprivation and starvation. In this condition, when someone says, ‘Kick the cow!’, you just do it. The horror with which animals scream becomes white noise.”

He also highlighted that even if they witness violations, many of these workers, especially those who are immigrants or have a felony record, cannot expose anything due to the risk that speaking up poses for themselves and their families.

But this environment is precisely what yields millions in turnover for Gressingham Duck and companies like it. Animal agriculture’s soaring profits are only made possible by cutting corners on animal welfare and denying workers sound physical and mental health.