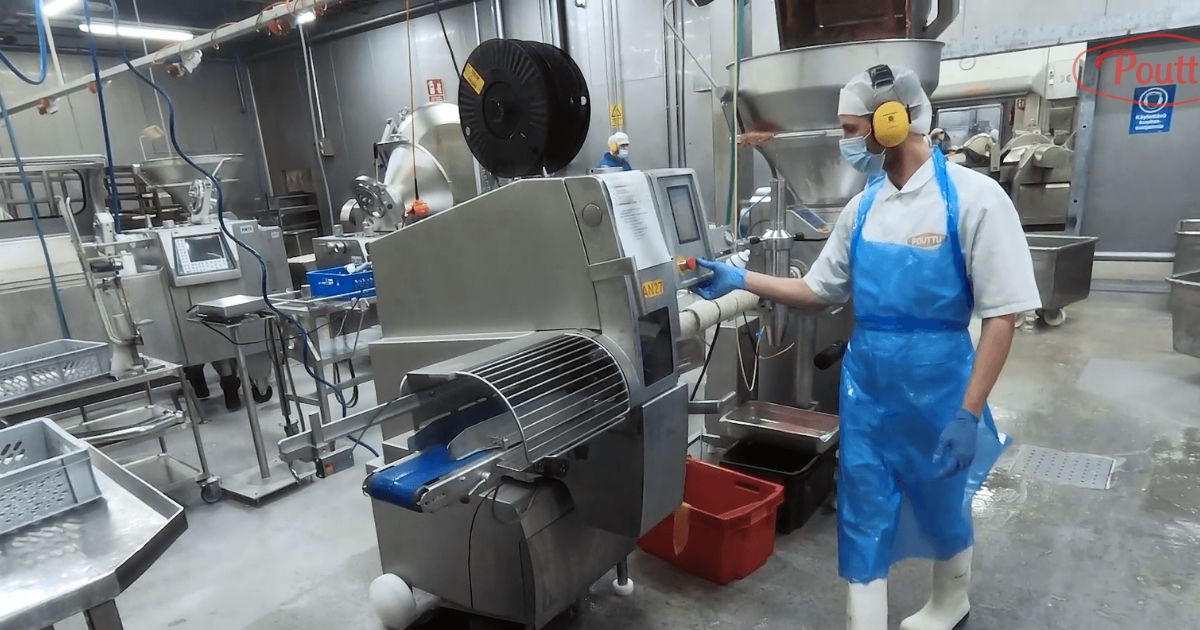 “Things can’t go on as they have been,” says Mikko Karell, CEO of Meeat Food Tech, a plant-based protein company based in Finland. “Food needs to be produced more responsibly,” he says, “responsibly to the planet, to people’s health and to animals.” Meeat is a spin-off of Pouttu, a Finnish conventional meat manufacturer founded in 1938.

A History in the Meat Industry

Before taking the helm of Meeat, Karell was Pouttu’s CEO. Yet his background in the food business started decades earlier. A child of a local grocer, Karell’s first summer job as a teenager was with the local co-op butcher. “I saw the meat business from the very beginning, and of course, back then in an environment where everything seemed to be in order. Not many questioned if things should or could be done differently.”

After studying restaurant and kitchen management, Karell started working in the marketing department of Atria, a large meat production company. He went on to join management team of Nestle Nordics, serve as CEO of a broiler chicken company and then as the CEO of Pouttu, one of the country’s largest meat companies.

“I was recruited to run Pouttu around the same time that the plant-based meat revolution was starting,” he says. The timing was fortuitous. Pouttu had been making tofu sausages for a decade, and while they had never found major success with the product, Karell saw the inflection point as an opportunity.

Selling meat at a loss needed to end, Karell thought. “It made no sense financially, and of course, it was incredibly irresponsible.”

How to Make Change Happen

Karell dove into research in 2019, traveling to the U.S. to purchase every plant-based meat alternative he could find at Whole Foods. He stuffed them in his suitcase along with a couple of pounds of dry ice bought from the backroom of a shady shipping operation next to the LAX airport. “It was like a trip right out of a Tarantino movie, but I made it back with my bounty.”

Back at Pouttu, they analyzed all the products in the context of a meat production facility. Karell felt they could relatively quickly convert the meat production lines into plant-based ones and produce a patty good enough to rival Impossible or Beyond Meat, but at half the cost. The first products hit the retail shelves five months later.

This is the core of Meeat’s idea. “Our vision is to convert the hundreds of thousands of meat factories in the world, step by step, into plant-based protein factories,” Karell says. Meeat Food Tech can do this rapidly, without slowing down production. Meeat Food Tech closed its first funding round of over $8m in August.

The Pouttu factory in Kannus, Finland, produces 8 million kilograms or 18 million pounds of food annually. When Meeat started in 2019, the plant-based share of that production was 0.5 percent. Today, it is 20 percent or 1.6 million kilograms of plant-based meat alternatives. Over time, Meeat will convert the factory entirely into a plant-based facility. Moving forward, they can do this same conversion at scale, with most standard meat factories anywhere in the world.

Profitability in the Plant-Based Sector

“We have the proof that this works. With Pouttu, we were able to move so quickly that the year after we started, the company turned a profit for the first time in a decade,” Karell says. In Finland, thanks to its ability to quickly market a broad portfolio of plant-based alternatives from patties to sausages to steak lookalikes, Meeat became the market leader in plant-based proteins after its first year of operation.

“We want to be a part of the consumer’s daily life. We’re going after the products with the highest retail volumes,” Karell says. Occasionally, observers wonder why plant proteins have to look and feel like their meat counterparts, but for Meeat, the reason is obvious.

“We’re rehabilitating consumers away from meat and towards the plant-based alternatives,” says Karell. “The consumer will find the familiar form more relevant, and they will know what to use it for and how to cook it.”

Karell thinks the current plant-based products are still not good enough to convert over most hedonistically motivated meat consumers. But the products will get there. In the meantime, increasing volumes and technological improvements will continue to drive down the cost of plant-based alternatives. “Our minced meat alternative is already around price parity with conventional minced meat,” Karell points out.

It will only take two to three years for the company to get close to price parity for most everyday proteins sold in retail shops, Karell thinks. “Today, when Beyond Meat sells for the same price per weight as premium tenderloin, the average consumer is not convinced that plant-based meats are for them.”

The next goal is to see plant-based proteins become the cost leader, which Karell thinks will be a major inflection point for the industry. Before that, the plant-based industry will be moving even faster than today in its development of taste and texture, likely combined with increasing consumer acceptance of the plant-based versions. “Taste and familiarity are key drivers of acceptance, but the price will be the driver of adoption,” Karell says.

If we examine food industry economics without governmental subsidies, the plant-based protein industry is already more profitable than meat. “In Finland, meat should be 30 to 40 percent more expensive on the retail shelves to carry its own cost,” Karell says. “At that point, plant-based alternatives would be at price parity or at a cost advantage.” As the volume in the plant-based business increases, it becomes even more competitive and profitable.

The economics are staked in favor of a plant-based food system in the future, Karell thinks. “The animal-based meat industry is already operating at such high volumes that there are very few efficiencies to be gained even if the volume increases.”

Better Use of Planetary Resources

Even in business, it is not all about the economics, Karell stresses. “Everything needs to be done more responsibly, and every company must get behind the idea of responsibility.” In Karell’s description, responsibility extends to the environment, society, public health and animals.

“We are very clearly living beyond what our planet’s capacity can support. If everyone in the world ate as we do in Finland, we’d need two and a half planet Earths to feed everyone.” Finnish food eating habits rivals consumption in western countries. While Finland’s meat consumption is less than that of the U.S. or the worst offender, Australia, the country has the dubious distinction of being among the world’s top dairy consumers per capita.

Yet Finland has seen relatively high uptake of plant-based meat in recent years. One likely driver is the unavoidable awareness of the ongoing climate crisis. Winters have become shorter in duration and lower in snowpack volume. Like elsewhere in Europe, summers have seen record high temperatures, including north of the Arctic Circle. At the same time, the profit margins of the meat industry have been declining to the point where every single animal makes a loss.

“Combining the ongoing climate crisis with the abysmal feed yield and calorie conversion rates for animal proteins, it makes no sense to assume we’ll continue on that path,” says Karell.

Farmers need to start looking at what they produce, Karell says, and how much food they can produce from their land. “What is your yield per acre? Not just in terms of grain or feed, but in terms of the final product that goes out to the consumer.”

Animal feed crops are grown in the service of animal agriculture, which means most of these calories, including proteins, are lost in the process of converting them into animal-based foods. One hundred calories of feed eaten by a cow will result in only one calorie in the form of beef.

Similarly, it takes feeding a cow 25 calories in proteins to produce the equivalent of 1 calorie of beef protein. Regardless of any other ethical considerations — of which there are many — the inefficiency of meat alone makes it a production practice that needs to stop as soon as possible. “The difference in scale is staggering. Say you can get 160 kgs or 360 lbs of pea protein per hectare. For the same hectare, you can only get 2 kgs or 4 lbs of beef-based protein,” Karell says.

It’s not just output per acre that farmers need to be concerned about. Food producers must look at inputs throughout the supply chain, such as water. “If you need 15,000 liters (about 4,000 gallons) of water to produce one kilogram of beef, and you only need 500 liters (130 gallons) to produce the same in pea protein, it is evident which is the responsible choice.”

A warming climate can make things worse for the animal industry — including the animals in it. “If it’s 35 degrees centigrade, not only is it bad for animal welfare, it is impossible for the producer because the animals will stop eating and therefore stop growing. You’d lose even more money if you had to start cooling down facilities. And if your animal mortality rate goes up, you lose more money.”

The Case for Plant-Based Transition

Accelerating the transformation to a purely plant-based food system globally is possible, Karell thinks. Still, it depends significantly on what happens in the large countries where living standards are improving, particularly China and India. As long as large meat-producing countries like Brazil see the global demand growing, they have little incentive to change their ways.

The rest of the world is mostly influenced by these trends. “In Europe, where our feed crop yield is decreasing, the current change in our consumption patterns will not change the global trend significantly in the coming decade.”

“We also need trade to step up and take responsibility for what they sell. Meat can no longer be the loss leader product that brings the consumer into the store. It is too irresponsible,” Karell says.

“We want to be leading this change with Meeat. We’re building a clean-label company. We’re investing in health, environmental responsibility and a sustainable future.”

How to Start Eating Plant-Based: A Beginner’s Guide