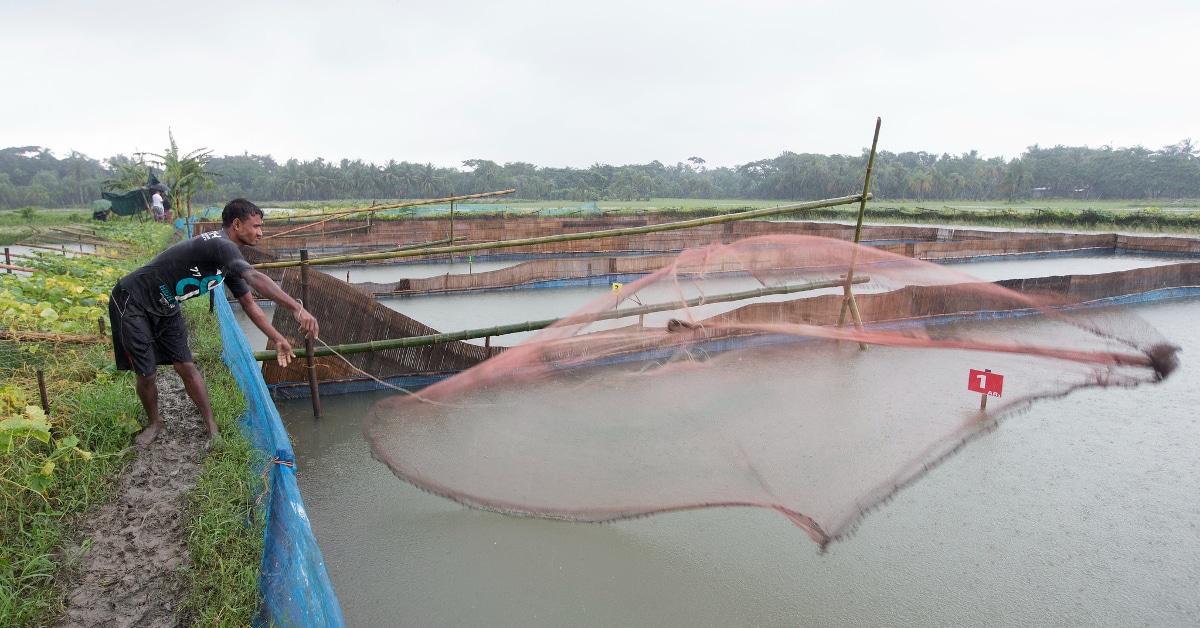 For centuries people have farmed and caught shrimp for use in cuisines around the world. During the last few decades, however, shrimp farming has changed so that shrimp may spend their whole lifespan in captivity, and the production of shrimp has grown considerably. As late as the 1980s, shrimp eaten in the United States was mostly caught in free waters. Now, due to the rise of shrimp farming, the popular crustacean has become one of the most common types of seafood consumed in the United States.

What Is Shrimp Farming?

Shrimp farming is when people cultivate the growth of shrimp throughout its entire lifecycle, which usually ends in selling the shrimp on the market for human consumption. It is considered a form of aquaculture.

Can Shrimp Be Farmed?

For centuries, coastal communities in countries like Ecuador, Bangladesh, Indonesia, Malaysia, Thailand and the Philippines have both caught free-living shrimp and raised them in enclosures as part of their traditional fishing practices. Modern shrimp farming, however, began to take hold more recently in the 1970s, with increased success in breeding shrimp fry in hatcheries. Most shrimp farming now occurs in Southeast Asia. Prior to its mass farming, shrimp had been considered a secondary crop complementing the cultivation of rice or fish.

Traditionally, shrimp farming occurred in marine waters or brackish waters — which means that the waters were a mixture of salty and fresh. The fry were collected from nature or encouraged to enter the ponds through tidal water. Baby shrimp were grown in salt beds, coastal paddy fields of brackish fishponds.

Shrimp farming is typically associated with mariculture, but shrimp can also be farmed in fresh water, in which slightly less than one-quarter of shrimp species live. Sometimes freshwater shrimp are referred to as freshwater prawns.

Almost all shrimp farming occurs in coastal ponds in tropical and subtropical regions of poorer countries, but the most expensive and intensive method of farming shrimp uses tanks.

In semi-intensive shrimp farming, the use of tanks is seen in hatcheries. One account of shrimp farming in Ecuador describes about 12 tanks filled with warm green water, indicating they are full of algae. Each tank holds pre-shrimp at different stages of growth. The nursery is a plastic-lined pond known as a growout pond, located in an estuary along the coast.

How Long Does It Take To Grow Shrimp?

Semi-intensive shrimp farming is based on a roughly 90-day timeline, starting when the female shrimp releases fertilized eggs and lasting until the harvesting of the adult shrimp. The shrimp is transported from the hatchery to the nursery and finally to the growout pond.

Baby shrimp, known as shrimp fry, can be caught from natural habitats or raised in shrimp hatcheries. At about 15 to 21 days old, shrimp fry from hatcheries are taken to grow in ponds. The shrimp then spend about one month to 45 days in a nursery pond. They are then taken to be grown in a pond until they reach the size at which they can be most profitably sold, spending about 10 weeks in this pond until they are “harvested.” The time spent in this last pond before they are “harvested” is about 10 weeks.

How Often Do Shrimps Breed?

After a female and male shrimp mate, the female shrimp will release fertilized eggs in an act known as spawning. Brown, white, and pink shrimp can spawn year-round, but have particular conditions that they favor for spawning, which are different depending on the species and lead to concentrated periods of spawning at different times of the year.

How Many Babies Can a Shrimp Have?

It can be hard to know how many shrimp are living in farming systems, and it’s difficult to find information about how many babies typically emerge from the many eggs that shrimp can release. Brown and white shrimp release 500,000 to 1 million eggs when they spawn. Depending on the species, a shrimp might live for anywhere between 1 and 6 years.

How Do They Kill Shrimp?

Shrimp are either slaughtered by asphyxiation or immersion in ice slurry. Adult shrimp are pulled from the growout pond and placed in chilled water. They are then put into boxes in an ice bath, and transported to be processed at the packing plant.

Significant environmental harms have been documented as resulting from the intensive shrimp farming that has arisen in the last four decades.

In some European countries and New Zealand, shrimp have legal protections as sentient beings. The Shrimp Welfare Project has identified several welfare factors that could reduce suffering in the lives of farmed shrimp, including disease and slaughter. Shrimp suffer from infectious diseases that can lead to mass mortality events — with mortality rates between 40 percent and 100 percent. Slaughtering shrimp by suffocation and chilling is likely inhumane, since there is no assurance that the shrimp are not conscious when this slaughter is occurring.

When shrimp farmers capture free-living shrimp to stock their ponds, the local populations of fish may be deprived of food to eat and ecosystems may be disrupted.

Eyestalk ablation is when at least one eyestalk of a female shrimp is deliberately crushed or cut off — a major animal welfare concern, according to the Shrimp Welfare Project. This is done to stimulate the maturation of ovaries and spawning in one of the most common species of farmed shrimp. The process can cause physical trauma and stress, among other negative outcomes, including increased mortality and reduced disease robustness among offspring. Some facilities no longer use eyestalk ablation.

Most farmed shrimp (80 percent) belong to just two species. Because the farms are monocultures, containing just one species, the shrimp are particularly vulnerable to disease outbreaks. Farmed shrimp can also pass diseases to other species, such as seagulls who eat them and then pass along the pathogen to others when they defecate in a different pond nearby. Since 1990, six new shrimp diseases have emerged in shrimp farms and spread throughout the industry around the world.

Shrimp farms release large amounts of waste. Organic solids, nutrients, bacteria, chemicals and antibiotics from the farms can dirty the groundwater and coastal waters. Excess salt from the farms can also seep into the land and alter the ecosystem.

Farm-raised shrimp can be safe to eat but there are reasons to pause before taking a bite of the pink and juicy crustacean that you buy from the supermarket or at a restaurant. Consumers often fear that farmed shrimp contain fertilizers, pesticides and antibiotics. Meanwhile, there are ethical considerations, and shrimp farming may not be safe for those who work in the industry. Workers — whether in farming or capture — are often lured into jobs that trap them into forced labor and debt bondage conditions.

How Profitable Is Shrimp Farming?

How much money you make from shrimp farming depends on what your role is in the industry and the kind of farm you’re working on. Forced laborers peeling shrimp make no profit from their exertions. For many others, shrimp farming is a significant source of income, especially for those living in some of the poorest parts of the world across Asia, Latin America and Africa struggling with historic and ongoing exploitation and injustice.

Dealing with the ill effects of shrimp farming requires first understanding the full context in which it supports people’s livelihoods. Shingo Hamada and Richard Wilk write in their book “Seafood” that on Kilwa Island in East Africa’s Lake Mweru, and in many cases around the world, well-meaning conservation organizations and national governments have wrongly targeted local fishers in their efforts to protect the environment. Instead, the destruction of mangrove areas such as those surrounding Kilwa Island can be attributed to “large developments by rich individuals and large corporations, groups over which the conservation organizations have little power.” Examples of such developments include large shrimp farms and beach resorts.

Local people are often sidelined from land use decision making. Meanwhile, their jobs and the improvement of their lives are cited as reasons to develop a natural area. Large nongovernmental organizations, big businesses and government agencies alike take control away from local fishers and give oversight to foreign organizations and distant government bureaucrats. This leaves local people with little way to make a living independently and to protect natural habitats for shrimp and other creatures.

Sentient Media’s Take Action page is a continually updated selection of resources where you can find communities working to end the suffering of animals such as farmed shrimp. The Marine Animals section includes links to vegan seafood recipes that can help you enjoy new, plant-based culinary ideas. You can also read a science-backed analysis of the experiences of farmed shrimp from the Shrimp Welfare Project, which offers a comprehensive look at shrimp farming from the perspective of animal advocacy.

Mangroves: How Shrimp Farming and Sea Level Rise Are Threatening These Vital Ecosystems