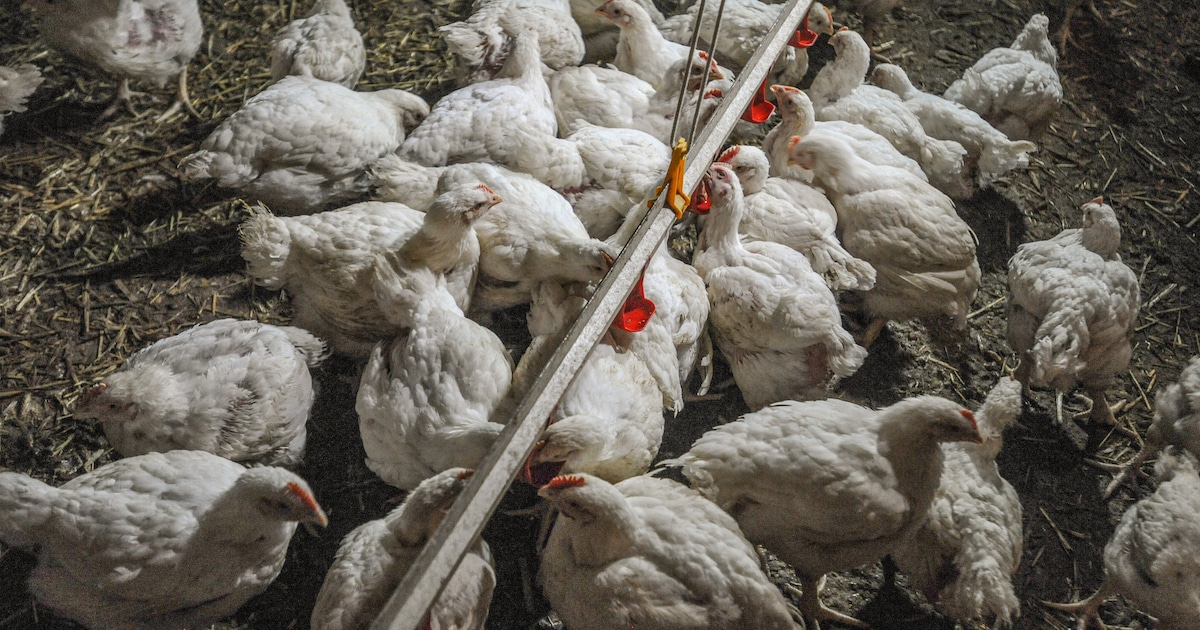 Plant-Based Chicken: What Is It Made of and Is It Healthy?

After cow burps, manure is one of the biggest sources of greenhouse gas emissions from agriculture globally. In 2018, it contributed 20 percent of agriculture’s emissions in the form of N2O, which has 300 times more warming potential than carbon dioxide. When manure is stored in lagoons or pits, as it is on many intensive farms, it decomposes anaerobically (without oxygen) and produces methane, contributing 5.2 percent of the emissions from livestock.

While some agribusinesses and researchers try to deal with the methane problem by sticking masks on cows or feeding them seaweed, the companies like Smithfield Foods and those in the biogas industry have been trying to make anaerobic digesters the standard way for farms to manage their manure.

An anaerobic digester (AD) works much as a manure pit does, depriving the poop of oxygen so it breaks down with the help of bacteria. The resulting gases produced are 50-80 percent methane, 20-50 percent carbon dioxide, and small amounts of other gases. The methane (known as biomethane to differentiate it from fossil gas methane from inside the ground) is then used as a renewable fuel.

The emissions savings can be significant. According to a paper published in the journal Sustainability, the 242 operating anaerobic digesters on livestock farms in the U.S. reduced GHG emissions “by 3 million metric tons of CO2 equivalent, a reduction equal to 633,701 passenger vehicles driven for a year, and provided 981 million kilowatt-hours of electricity, equivalent to the electricity used by 72,801 homes for a year.”

But far from benign emissions-cutting machines, ADs are helping to entrench factory farming and further industrialize rural areas, and may cause climate and environmental harms of their own.

Not all anaerobic digesters are created equal

Governments and intergovernmental organizations are pretty keen on ADs. Both the Food and Agriculture Organization (FAO) and the European Commission have previously produced reports touting them as the most effective way to reduce GHG emissions from livestock manure. Federal and state agencies in the U.S. have given millions in subsidies for the development of ADs.

In some countries, there are clear benefits to ADs. According to a study by the Stockholm Environment Institute that looked at the use of ADs in Bangladesh, small-scale ADs installed on farms reduced cooking smoke in the home by replacing the burning of solid manure and other biomass with biogas as fuel and reduced unmanaged manure and run-off. In addition, ADs improved fuel security and, when ADs were medium-size, the chance to make more income by selling excess biogas to other families in the community. Small-scale ADs are most common in China and India, where they have been used for decades and number around 40 million.

There are much fewer ADs in the U.S., where nearly 300 ADs are used for livestock waste, and the UK, where the majority of nearly 600 ADs process manure and tend to be larger-scale facilities. Very few farms operate small on-site ADs in the West, due to the large upfront costs of building them and the expertise needed to maintain and operate them. Big biogas companies now dominate these AD markets, building out plants that can process waste from multiple feedstocks, as is now the case at the Whitchurch Biogas plant in Shropshire, UK.

The Whitchurch Biogas plant was built to make biomethane out of grass silage and waste from making cheese. Residents of Whitchurch, a historic market town, were already unhappy with the plant when it was first proposed in 2014 due to concerns about its impact on the local environment. The biogas company was granted planning permission last year to expand the plant, and residents now face the prospect of thousands of tonnes of chicken manure being trucked into their town and added to the mix of waste already being fed to the AD.

Shropshire has an abundant supply of chicken manure from its numerous intensive poultry farms. So does the neighboring county of Powys, where a new poultry farm with a capacity for 110,000 broiler chickens may soon get the go-ahead to be built at Llanshay Farm.

Earlier this year, the application for Llanshay Farm was quashed after Powys County Council admitted it had acted unlawfully in granting permission without evidence that disposing of manure by spreading it on fields wouldn’t negatively impact the local community. The developer, Tom Price, came back with a new plan for dealing with waste from the farm: send it 55 miles away to the Whitchurch Biogas plant. The director of Whitchurch Biogas told Price in a letter that his plant would be happy to take “all of the poultry manure” from Llanshay Farm.

A similar story is playing out in the village of Stradbroke in Suffolk, where a proposed poultry farm for 800,000 birds could make use of a nearby AD plant, which was built three times larger than it originally allowed. The developer retrospectively sought permission for the larger plant and added chicken manure to the permitted digester feedstock. “We could be facing chicken factories at one end of the village and a power station at the other,” a councilor for the village told the local newspaper.

If the problem of too much manure can be dealt with through ADs, there goes one of the most persuasive arguments that communities have against the development of new intensive farms. As Camilla Saunders, spokesperson for Sustainable Food Knighton, which has campaigned against the opening of Llanshay Farm, says, it’s “just more and more industrialization. Our local town council of course thinks this is all great, tech fixes being the rage now. Anything but deal with a problem at [the] source.”

The mutually beneficial relationship between intensive farms and AD plants is one being repeated around the UK. A number of large-scale ADs are connected to intensive pig farms, poultry farms, and dairies by a stream of manure-laden trucks that sometimes pass through small towns and villages ill-equipped to handle them. More ADs are in the pipeline as the government seeks to scale up the production of biomethane to heat 230,000 homes. The ever-increasing number of factory farms being developed will ensure plenty of manure to feed them with.

For the biogas industry, the more animal waste available the better. But you need a lot of manure to compete with the methane yields of energy crops processed in an AD, and energy crops, often maize, take land out of food production. When it is grown intensively, maize also destroys soil and requires significant amounts of synthetic fertilizers and pesticides.

As a fuel, biomethane is better for the climate than fossil gas methane. But in order to produce enough of it to displace fossil gas would require far more than can be made via ADs with available feedstocks. According to the Union of Concerned Scientists, “if biomethane were captured from all potential sources of organic waste in California, the resulting supply would meet approximately 3 percent of the state’s demand for natural gas.” Depending on biomethane as an alternative ‘renewable’ fuel source would require more factory farms and more energy crops.

Not only are ADs greedy, but they also produce their own emissions. Methane leaks, known as fugitive emissions, are inevitable. A blog on an anaerobic digestion news site states, “Unintentional emissions will be occurring from all biogas plants. Storage tanks inevitably leak a small amount, as do pipe joints, valves, and other equipment. Other fugitive emissions will occur when digesters are opened up for maintenance, and during commissioning.”

A report commissioned by the UK’s Department of Business, Energy and Industrial Strategy shows that leaks from AD plants in different European countries were as low as 0.2 percent relative to the amount of methane produced and went as high as 33 percent, depending on the type of AD and feedstock used.

Accidents and malfunctions also occur at AD plants that can become serious pollution and emission events. A report by the Environment Agency of the UK lists around 30 incidents that occurred between 2010 and 2018 at a range of ADs, including “partial or complete collapse of primary containment and associated loss of digestate [the organic matter left over after anaerobic digestion], water pollution from storage of feedstock or digestate, significant odor, loss of biogas, fires and explosion.” One “catastrophic failure” of a gas holder at a wastewater treatment plant in 2011 released around 50,000 cubic meters of “potentially explosive” biogas into the atmosphere over 19 days, with the estimated global warming potential equivalent to 456.6 tonnes of CO2.

The problems with animal agriculture cannot be reduced down to its GHG emissions, and neither can the worth of its solutions. Anaerobic digesters may cut emissions from manure, but when used to the benefit of factory farming they stop being a solution and become a burden instead.

Air Pollution From Factory Farms Is Killing Us