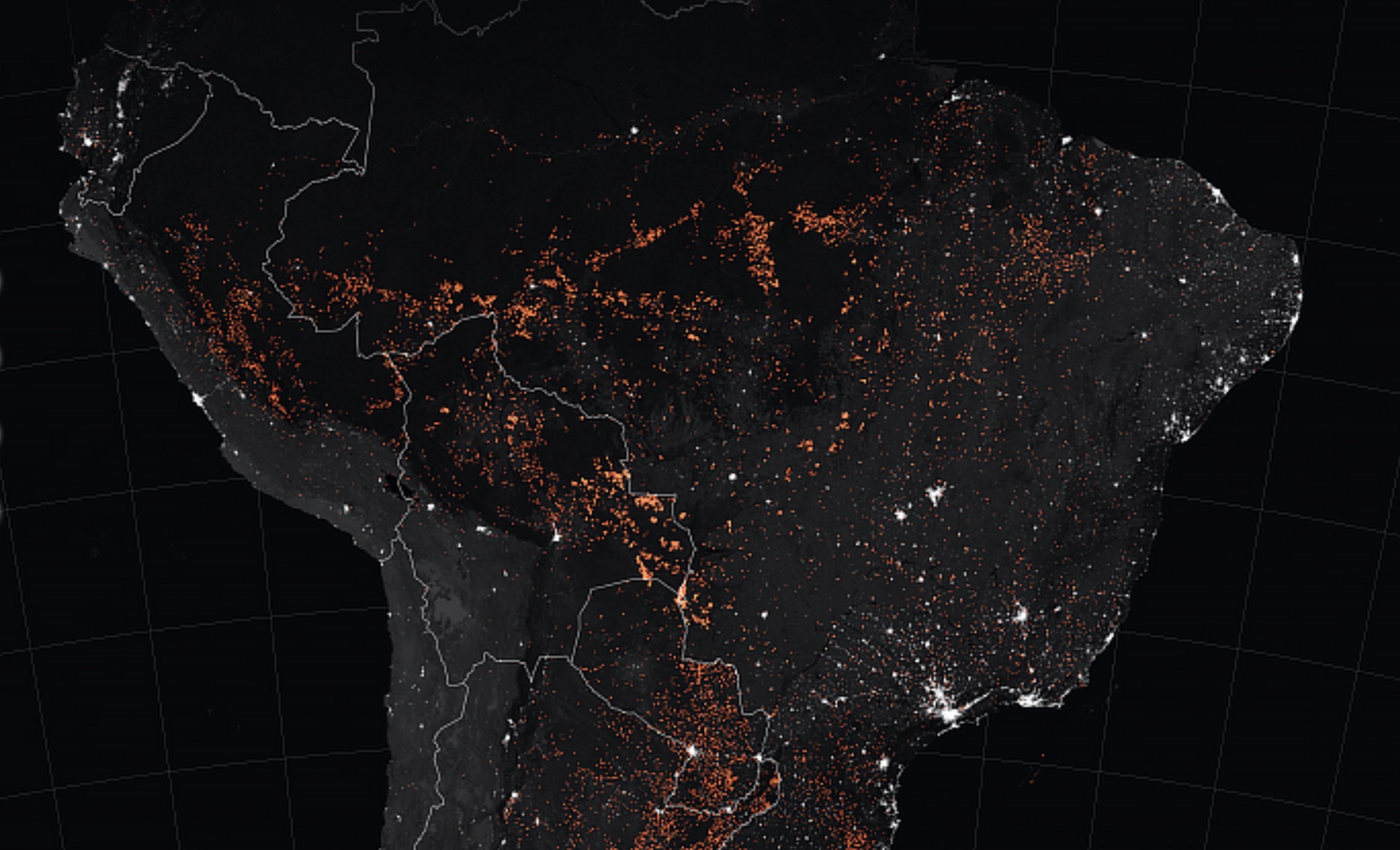 The Amazon Rainforest is burning and the world is finally paying attention.

The rates of deforestation have been soaring under the new far-right government and Brazilian president Jair Bolsonaro who sees the Amazon as not much more than an opportunity to raise more cattle and plant more soy.

In fact, Bolsonaro joked in an interview with Reuters saying “I used to be called Captain Chainsaw. Now I am Nero, setting the Amazon aflame.”

Bolsonaro, who has promised to bring prosperity to the people by ruling with the iron fist that is popular among populists, has been doubling down on agriculture, the strongest performing sector in Brazil in recent years. It is this economic interest combined with a complete disregard for the environment that is now burning down the rainforest.

The Amazon, unlike many other forest types, rarely burns naturally even in the dry season. There are many indicators that the majority of the fires have been started intentionally. Folha da Progresso reported that farmers and ranchers in the state of Pará had organized a “fire day” for August 10th to start clearing the land.

According to Inpe, the National Institute for Space Research in Brazil, fires in the Amazon have increased 84% in comparison to the same time period back in 2018, before Bolsonaro took office. Infamously, Bolsonaro has discredited the data, up to the satellite imagery showing the extent of the damage. He fired Ricardo Galvão, the head of the agency last week because he claims the agency is trying to undermine the government by publishing fake news.

Meanwhile, the smoke from the fires is reaching as far as São Paulo, 3,000 kilometers (1,900 miles) away, darkening the daytime skies.

Political Will to Disregard Reality – and the Planet

Bolsonaro may not be to blame for every single fire that’s burning in the Amazon, but it is now easier for cattle ranchers and loggers to get away with criminal arson when they know that their current government is not going to step in.

With the current international attention being drawn towards the catastrophe, Bolsonaro announced a “zero tolerance” towards environmental crimes and said the army would be deployed to fight the fires. But he never wavers from his line that the Amazon is Brazil’s to do as they please and to provide for “economic opportunities” for the population. He has said numerous times in the past that the Amazon needs to be privatized and exploited in coordination with major industries and other countries in order to turn larger profits.

There is no overstating how much less Bolsonaro cares for the environment – let alone the global climate – than he does for short-term gains in productivity of the exploitative industries that supported his rise to power. And it is crucial to understand that while the regime favors developing land for production, up to 80% of the deforestation going on is illegal, even under the country’s own current laws, but the government is turning a blind eye to this. Earlier this year, the military police detail that this far accompanied the inspectors looking for violations was removed. This makes the work of inspectors so dangerous that it might as well be impossible to monitor the vast rural areas of Brazil.

Jair Bolsonaro does not take the threat of climate crisis seriously or the mounting evidence that the Amazon Rainforest may be reaching a tipping point of runaway deforestation as the region’s ecosystem falls out of balance: mega-droughts alternating with major flooding. He infamously stated that if people want to make a positive change for the environment, they should “poop every other day” instead of on a daily basis.

Who Lit the Match? Global Appetite for Meat

Why is the forest being cleared in the first place? Logging, mining, and cattle ranching are often mentioned, but this doesn’t get to the root of the problem. Mining, first of all, does not take large amounts of land compared to the other types of natural exploitation. Cattle ranching needs much more land, but while Brazil is infamous for producing livestock and beef cows, it is not even ranching that is really driving the current momentum. Logging has traditionally been thought of as the scourge of forests, but logging makes a quick buck, and then you’re left with a lot of cleared land (also, if you’re planning on exploiting the timber in a forest, burning the trees doesn’t really make sense). So what’s going on, really?

The Amazon is being cleared to grow soybeans. That soy is almost exclusively harvested and exported to feed livestock on factory farms around the world, an easy and cheap way to feed animals and get them fat for slaughter quickly.

It is the world’s appetite for beef that is fuelling the fires in the Amazon.

While most soy typically comes from different areas of Brazil, most notably the Cerrado region, that doesn’t mean that planting soy in the Amazon doesn’t happen. And with a government that encourages the exploitation of nature to turn a profit and a soy-hungry China increasing their demand for Brazilian livestock feed, it’s no surprise that the Amazon is burning.

Bloomberg reported on August 15th that China has increased purchases of Brazilian soybeans after freezing the US trade of the crops. In tandem, Argentinian farmers have been holding back on sales due to currency instability. That leaves the giant, Brazil. 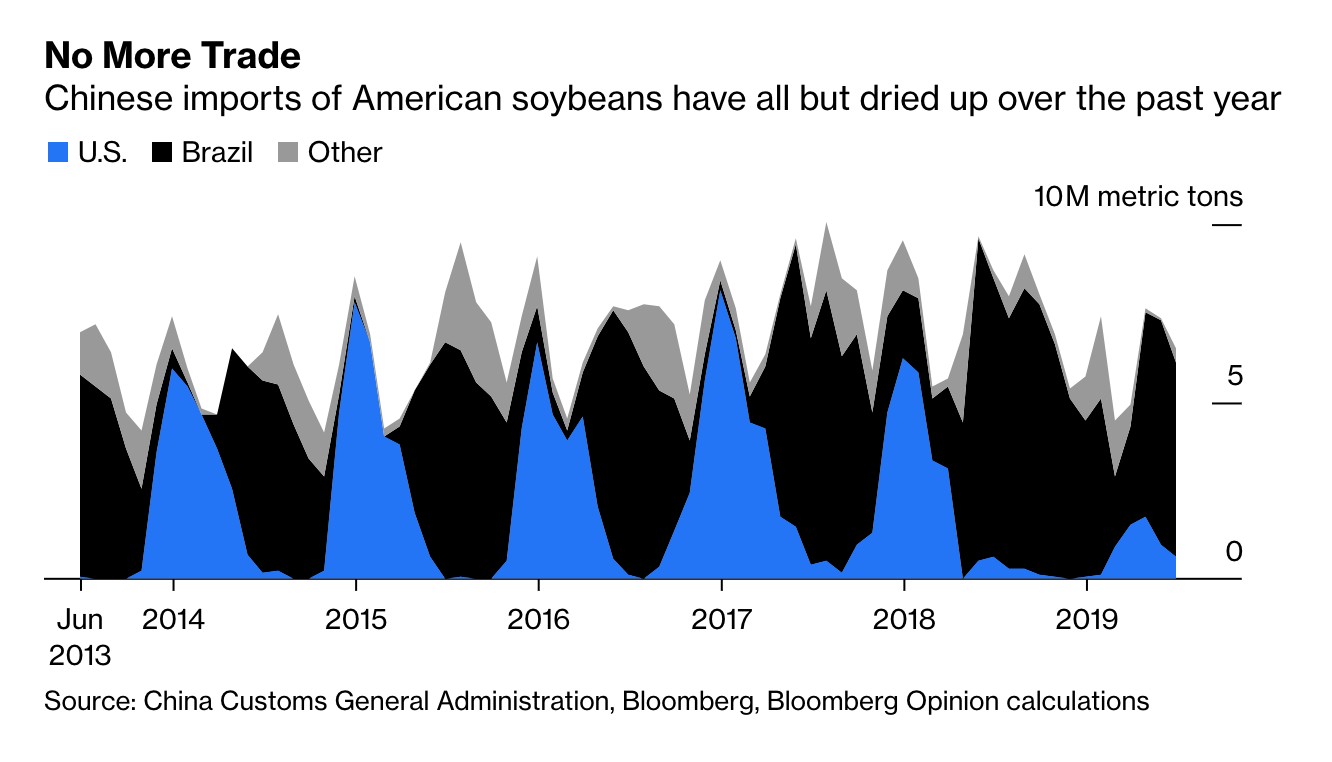 2019 started off with a decrease in Chinese imports of Brazilian soy, a 13% drop in the first four months from the previous year. However, as Washington and Beijing continued fighting and have been unable to work around the bickering between leaders, the demand from China has increased. If it wasn’t for the African Swine Fever having reportedly infected and killed as much as a quarter of China’s pigs being grown for pork, Chinese demand for feed could be even higher.

The environmental catastrophe is ringing the alarm bells in Europe where countries in the G7 summit in France have planned for both carrot and stick to Brazil. Any sanctions or demands may throw a wrench in the near-concluded Mercosur negotiations between the EU and Argentina, Brazil, Paraguay, and Uruguay. France and Ireland have already declined to sign the Mercosur contract if the Amazon fires are not curbed. If that happens, then Brazil will increasingly be aligned with China buying its crops to feed the meat-hungry population.

With these dynamics, the European Union may yet find itself in a power position. For the remainder of 2019, the Presidency of the European Council is with Finland, and the country is pursuing an EU-wide ban on Brazilian beef. The Commission is expected to take action later this week.

Burning the Planet for Beef

The world is finally waking up to the existential planetary risk that animal agriculture poses. It is not just the climate emissions, or deforestation, or disruption of the water cycles. It is an ecosystem-destroying combination of all of these things, critically demonstrated by the Amazon Rainforest fires. Whether or not they will be put out in time, the Earth will not have dodged the bullet yet.

What can you do to help? You can donate to charities working to control and mitigate the damage. You can share this article and the linked resources. And you can stop eating meat.