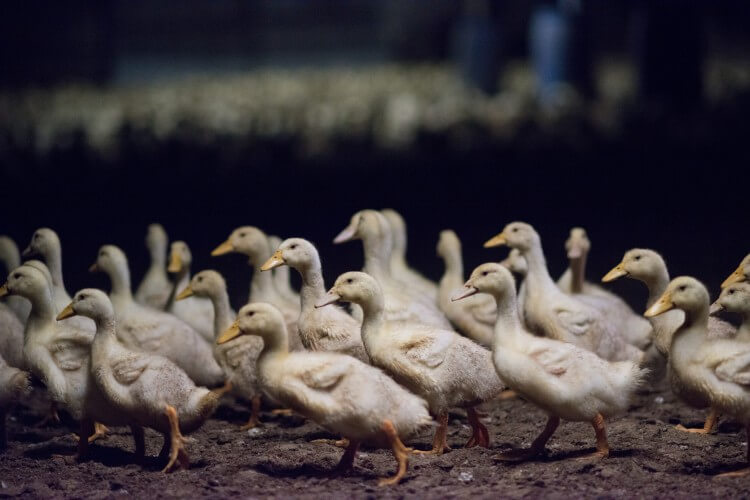 Your Guide to Slashing Single-Use Plastic

“The birds weren’t vocalizing, but it wasn’t silent. What I remember most clearly was not the silence, but the heavy panting of animals as they struggled to breathe,” Sarajane Blum recalls of her time inside of Hudson Valley Foie Gras (HVFG) in New York.

Hundreds of thousands of ducks and geese are forced into close quarters on foie gras farms; foie gras meaning “fatty liver” in French. Many times a day, the ducks are violently plucked from their pens to endure egregious amounts of force-feeding. Each bird is force-fed up to three times daily with a 10- to 12-inch metal tube inserted into its esophagus, pumping the bird with grain, fat, and compressed air.

The feeding process is done in a hurried manner to maximize commercial productivity. The sole intent of this gruesome practice is to induce hepatic lipidosis, a diseased state of liver enlargement. The livers of these force-fed birds can grow to be up to ten times their natural size before being considered prime for foie gras. The final step is slaughtering the ill, 3-month-old birds – who would soon die anyway from the induced hepatic lipidosis – only for their fatty livers to be served as a delicacy. 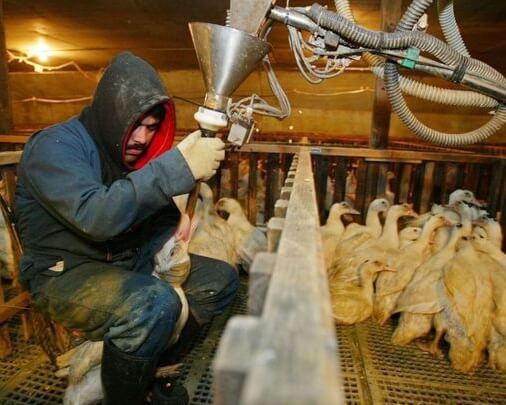 “[T]here is good evidence that liver structure and function…is severely altered and compromised in force-fed ducks and geese. [The Committee] on Animal Health and Animal Welfare concludes that force feeding, as currently practised, is detrimental to the welfare of the birds.”

In Ferndale, New York, thousands of ducks endure these abusive conditions day in and day out. Since 1990, HVFG, one of three companies responsible for producing foie gras in the U.S., has raised, grossly over-fed, and slaughtered over 10 million ducks prematurely for their diseased livers. Thousands of day-old ducklings are trucked in weekly and held in the nursery barn until they are big enough to enter the feeding barns.

Large-scale investigations have been conducted at HVFG by organizations such as PETA, Compassion Over Killing, Mercy For Animals (MFA), and many others. What did all of the findings of each investigation have in common? Animal welfare standards were not in line with assertions made by HVFG. A 2014 investigation by MFA led to undercover camera footage being released that was truly disturbing. Workers aggressively shoved metal feeding tubes down birds’ throats, dead birds were simply tossed into trash bins, and fully conscious, diseased birds shackled by their feet were slaughtered by having their throats slit.

Amber Canavan, an undercover investigator, reported that birds in feeding barns are crammed into wire-bottomed pens raised over their own urine and droppings. Just above the pens, looming in their line of sight as a permanent reminder, are the metal tubes workers use to forcibly feed them. Birds who die in the feeding cycle may remain lifeless in pens with living birds for up to a day. Once the bodies are removed, they are tossed into trash cans that lie in plain sight of the still living, but incredibly ill birds.

“In all three barns, the trash cans of corpses were so absent-mindedly used,” said Blum. “You would see the neck of an animal hanging on the outside, with the body on the inside…people would forget to put the lids on.”

Prior to 1997, HVFG allowed the public into its facilities to tour its foie gras production system. Not surprisingly, the tour participants were very displeased by what they saw. The company soon realized that it could not truly show off its production, as the hurried and forceful acts of feeding, coupled with the sight of visibly ill birds, was too incriminating for HVFG.

Dr. Holly Cheever, Doctor of Veterinary Medicine, stated “what [HVFG] learned in 1997 is that they cannot show the birds in the last 10-14 days of production – they are too clearly ill…they also learned that they cannot show how feeding is done regularly because it is too hurried, noisy, smelly, and therefore it looks violent.” 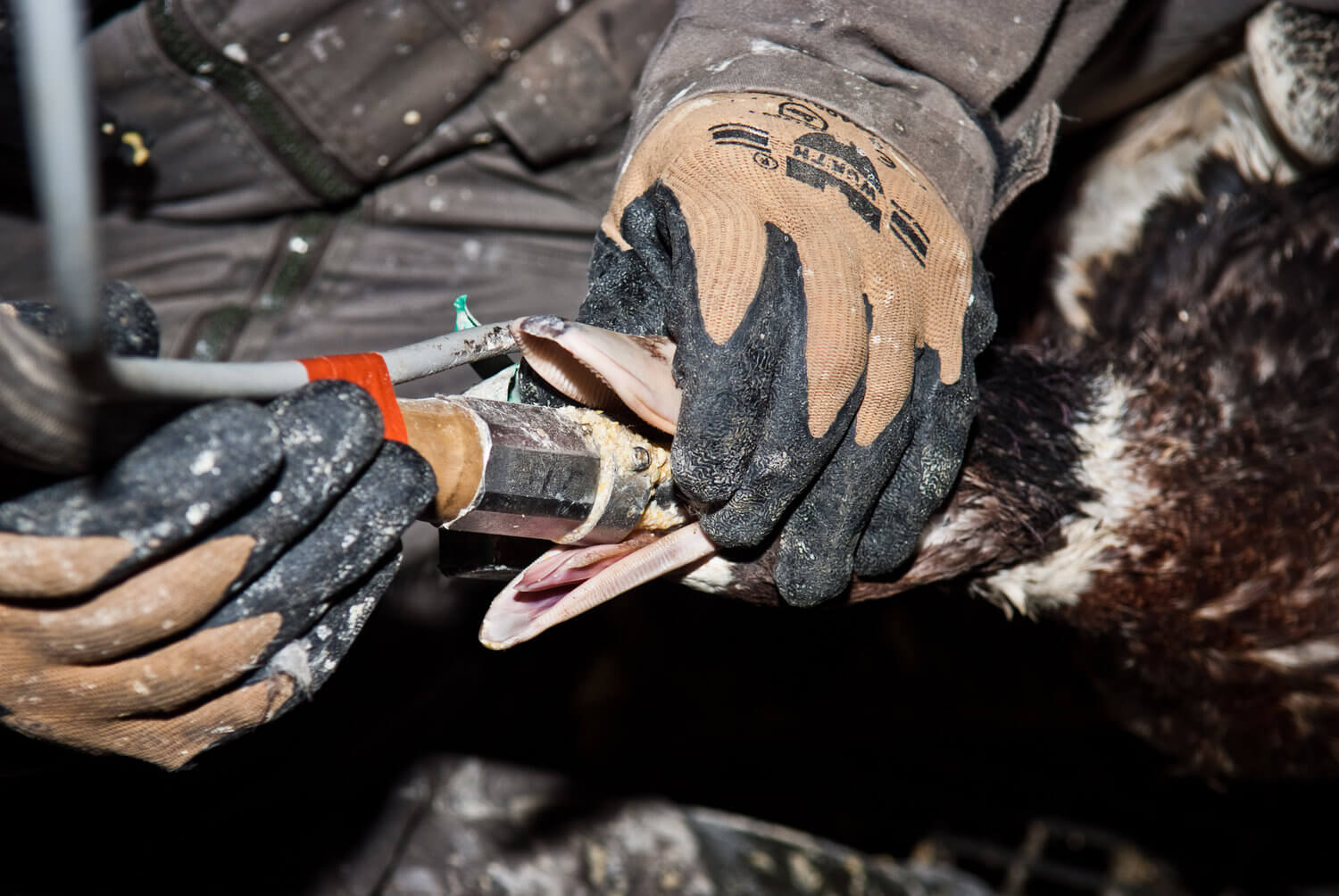 Beginning in 2004, after Dr. Cheever and Whole Foods Communication Director Margaret Wittenberg toured and reviewed HVFG’s facilities, the company began leading a different tour in an attempt to generate more positive publicity. On these tours, participants only witness one to two workers feeding a small group of birds. The company wanted to show the public how humane and personal its feeding practices were. While HVFG continues to claim that these partial tours reflect its true practices, this falsehood has been discredited by numerous investigations conducted by animal protection groups. The “staged” tours may appear sereen, but they falsely represent true production speeds, as Dr. Cheever has proven.

At a City Council hearing in June of 2019, Marcus Henley, Operations Manager for HVFG, stated that the company processes 6,000 birds per week for sale, and that each worker handles 350 birds per day at three different feeding times – for a total of 1,050 feedings or interactions per day. However, at least 17 workers are needed to meet the production number of 6,000 birds per week that Henley stated. This differs significantly from the two workers “on display” on the current tours.

The sheer amount of feedings that a worker must complete each day allows the worker only seconds to feed each bird. This quick pace often requires workers to act more aggressively as birds begin to fight back, causing frequent tears to the esophagus, bleeding sores, and other injuries. Therefore, workers must be very careful when it comes to overfeeding the birds for which they are responsible. What is considered to be the proper-sized liver for foie gras can easily cause the death of a bird that is overfed and suffering from ruptured organs. Workers are customarily offered a monetary bonus as an incentive to kill fewer than fifty birds per month.

Seeking an end to this cruelty in New York City, Voters for Animal Rights, along with a coalition comprised of over 50 other nonprofit organizations, are backing Intro 1378.

New York City, a metropolis that prides itself on its progressivism, is following the lead of the State of California, the United Kingdom, Denmark, Finland, Germany, and dozens more jurisdictions, by pursuing a legal ban to prohibit the sale of foie gras from force-fed birds. On January 24, 2019, New York City Council Member Carlina Rivera introduced Intro 1378, which would “prohibit the sale or offer for sale of foie gras made from force-fed birds, and in food service establishments would further prohibit the provision of such foie gras in any manner.”

Proud to introduce a new bill to ban the cruel production and sale of foie gras in NYC. I will be working w/advocates (including @TheAnimalVoters & @HumaneSociety) and my colleagues to pass this important legislation. pic.twitter.com/UrAzqc9fHh

This proposed bill has received the support of more than 100 NYC-based restaurants, 50 plus NYC-based veterinarian professionals, and the bill is co-sponsored by 29 City Council Members. In addition, a survey conducted by the polling and strategy group Mason-Dixon shows that an overwhelming 81 percent of registered New York City voters support legislation to prohibit the sale of foie gras from force-fed birds.

Sold in 1.5 percent of NYC restaurants, foie gras is relatively rare. The question is will the inherent cruelty of this industry outweigh the city’s desire for a gourmet dish? The New York City Council Members will vote on its ban within city limits sometime this fall.