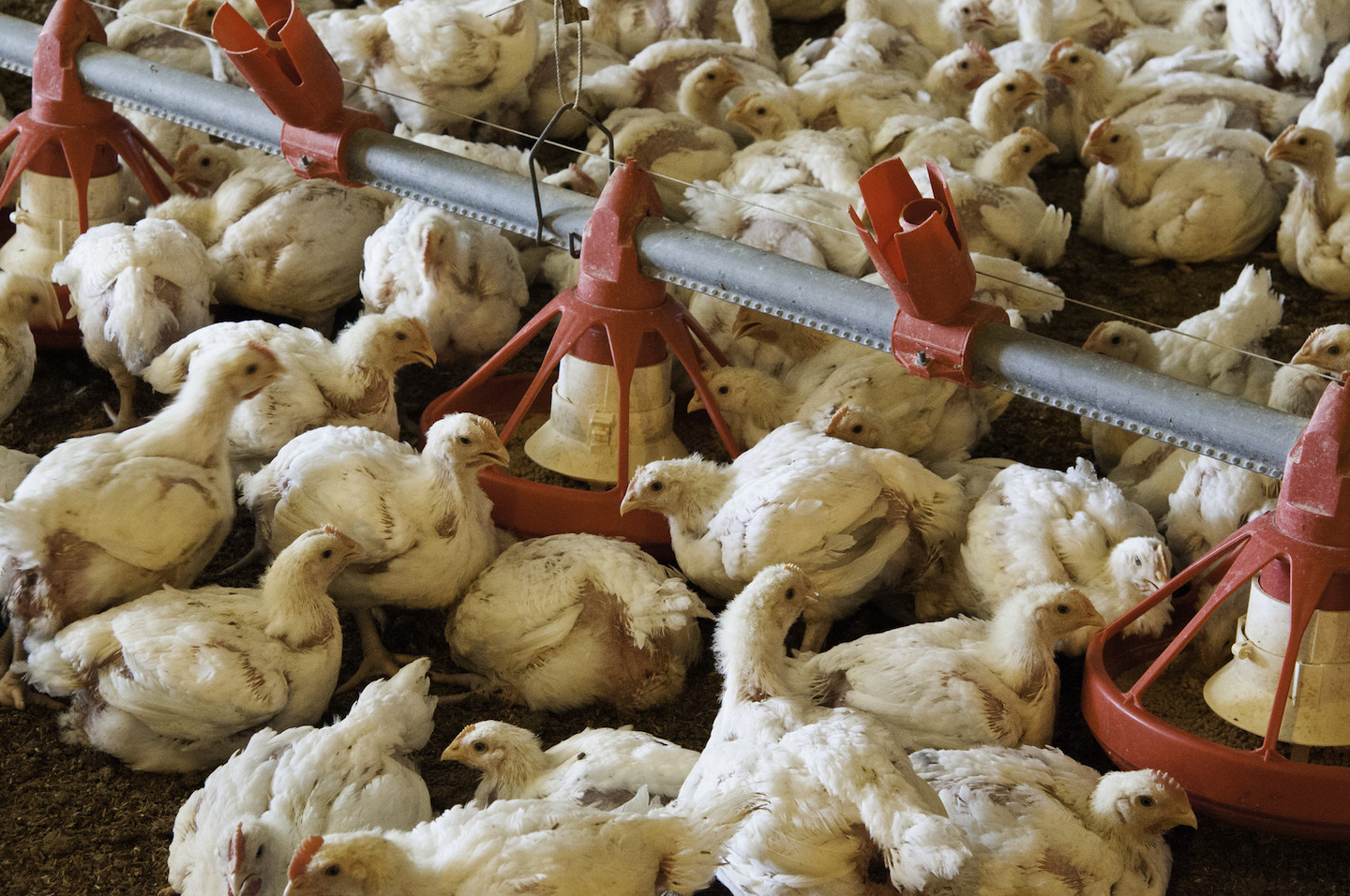 How Do Hog Farms Operate?

New rules that reduce oversight and encourage expansion of concentrated poultry feeding operations have come home to roost in Kansas.

A new law that took effect July 1 doubles the number of chickens that can be housed in a single facility to more than 300,000 and relaxes regulatory and permitting requirements. It also slashes the distance that operations must be from homes, schools and hospitals from 4,000 feet to just 1,000.

During a hearing on the bill this spring, state Rep. Kyle Hoffman (R) acknowledged the Kansas bill would be a boon to corporate agriculture in his state.

“It’s an important bill to say that Kansas is open for business for poultry,” he said.

Although the legislation creating the new rules did not explicitly name Tyson Foods, the world’s second-largest processor and producer of meat that is worth more than $20 billion, it’s Tyson that’s most likely to benefit. The company already has several poultry facilities just across the border in Missouri. In 2016 Tyson reported paying Kansas hog suppliers $1.3 billion to provide meat to other processing facilities. Chicken and other livestock growers  are often contracted by big companies like Tyson or Smithfield to raise animals for slaughter, then processing.

Tyson was pivotal in crafting the new law, said state Rep. Jim Karleskint, a Republican who sits on the state’s agriculture committee who voted against the legislation.

When the new law was proposed in February, many Kansans were outraged to learn that more concentrated animal feeding operations (CAFOs) – the term used for large-scale production in which more than 1,000 animals are kept in confinement – may be moving in.

One group of residents in Tonganoxie, a 5,000-person town in the northeastern part of the state, was particularly angry, since they had already forced local officials to reject a plan to build a gigantic chicken plant in their backyard.

In 2017, former Gov. Sam Brownback (R) announced that Tonganoxie has been chosen as the destination for Tyson’s new poultry processing center, a $320 million facility capable of slaughtering more than a million chickens per week. The agreement, which had been made behind closed doors between state legislators and the company, would create Tyson’s biggest chicken plant in 20 years.

Residents were shocked at the proposal, not to mention the $500 million in tax-free loans the county had promised Tyson.

They were also worried about Tyson’s environmental record. Pollution from Tyson plants feeding into the Gulf of Mexico has also been linked to one of the world’s largest environmental dead zones. In September 2017, Tyson pleaded guilty in a federal court in Missouri to two criminal charges of violating the Clean Water Act for dumping an acidic feed supplement into Missouri waterways from its poultry processing facility Monett, Missouri, a three-hour drive from Tonganoxie.

The incident took place in 2014 when a leak in a containment unit caused ALIMET, a liquid feed supplement 88% methionine an essential amino acid, to flow into other storage units. When the spillage was removed, the substance was transported to the Monett facility and stored in a treatment system incapable of holding the waste. Once ALIMET from that unit seeped into Monett’s wastewater treatment plant, bacteria were killed that protected the water from high ammonia levels. Deprived of this protective bacteria, over 100,000 fish died.

In the end Tyson was forced to pay a fine of $2 million and given a two-year probation sentence. In a statement about the incident Tyson says they “deeply regret the mistake made at our Monett processing plant in 2014 and have taken corrective action.”

Critics say chicken manure contains more nitrogen and phosphorus than cattle manure, and if it gets into waterways, these excess nutrients can create algae blooms that zap the water of oxygen and kill aquatic life. Meanwhile, research shows that bacteria from CAFOs can spread far from the facilities. Chicken waste can also release more than 160 gases – such as ammonia, methane and hydrogen sulfide – into the surrounding area, not to mention odors that can reduce the quality of life for those living nearby.

Protest ensued in Tonganoxie as residents learned more about Tyson’s record and the proposal. After more than 2,000 people gathered at the town’s local park calling for “No Tyson in Tongie” in September 2017, the Leavenworth County commision pulled their incentives, prompting Tyson to find another location for the plant.

Tonganoxie’s rejection, say critics, is what led to Tyson to lobby for a statewide law that would allow it to build larger facilities without requiring similar local approvals. State legislators were unhappy about what took place, said Zack Pistora, a Tonganoxie native and now a lobbyist for the Kansas Sierra Club – not because of how locals were treated, but at the notion that a small town thumbed their nose at Tyson.

“This little town of 5,000 people in Tonganoxie put a bad taste in their mouth, that if one of the biggest food companies wasn’t welcome in that part of Kansas, the state was going to have to backtrack and do something else to really show their support,” Pistora said.

During one of the bill’s debate sessions, state Rep. Larry Hibbard (R) called what happened in Tonganoxie an “embarrassment” for preventing the expansion of poultry production in the state.

But residents were insistent that the changes would be damaging to their communities. “I live out in the countryside and I see these open flat pieces of field and I’m thinking, chicken houses,” said Pistora.

Cecilia Pruitt, a registered nurse and Tonganoxie resident, testified at the hearings about risks of exposure to chicken pathogens.

“I am afraid for our children,” she told legislators. “I cannot help but question why anyone would consider bypassing research and placing their welfare in danger. We do not know the effects of placing 333,000 chickens only 1,320 feet from where they attend school, play and eat.”

Other farmers aren’t very happy about the new law, either. During a board meeting in March, the 56-year-old Kansas National Farmers Organization issued a resolution against the bill, citing concerns about environmental harm and its potential to subject poultry farmers to predatory contracts.

“The Kansas NFO opposes relaxation of environmental standards and producer protections under current law,” said the resolution. “We also believe local people should control their local zoning and business expansion.”

The industry has friends in the right places

Worth Sparkman, a spokesman for Tyson, said that the company “is generally supportive of laws that help make states more supportive of the farming community and economy,” and that the company supported the Kansas law, as did the Kansas Agricultural Alliance, which includes Kansas Farm Bureau, Kansas Corn Growers Association and Kansas Pork Association.

In a statement, Tyson said it was “committed to continuous improvement in all areas of our business, especially when it comes to protecting the environment. That’s why we’ve committed to reduce greenhouse gas emissions 30 percent by 2030 and to increase land stewardship practices on 2 million acres of corn by 2020.”

Many of Tyson’s facilities across the country spend months in noncompliance with the Clean Air Act, Clean Water Act and/or the Resource Conservation and Recovery Act.

Kansas Gov. Jeff Colyer (R) did not respond to requests for comment about the new law.

The Kansas law is just one of a number across the country from states looking to attract multibillion dollar agricultural corporations with more lenient rule-making. Other state houses, including North Carolina and Missouri, have advanced legislation that relaxes environmental regulations, limits the power of residents to contest rulings, or offers huge appeasements industrial farming.

While Tyson doesn’t appear to have any immediate plans to establish a poultry facility in Kansas, it now has a greenlight for expansion – and citizens are left with little to stop it.