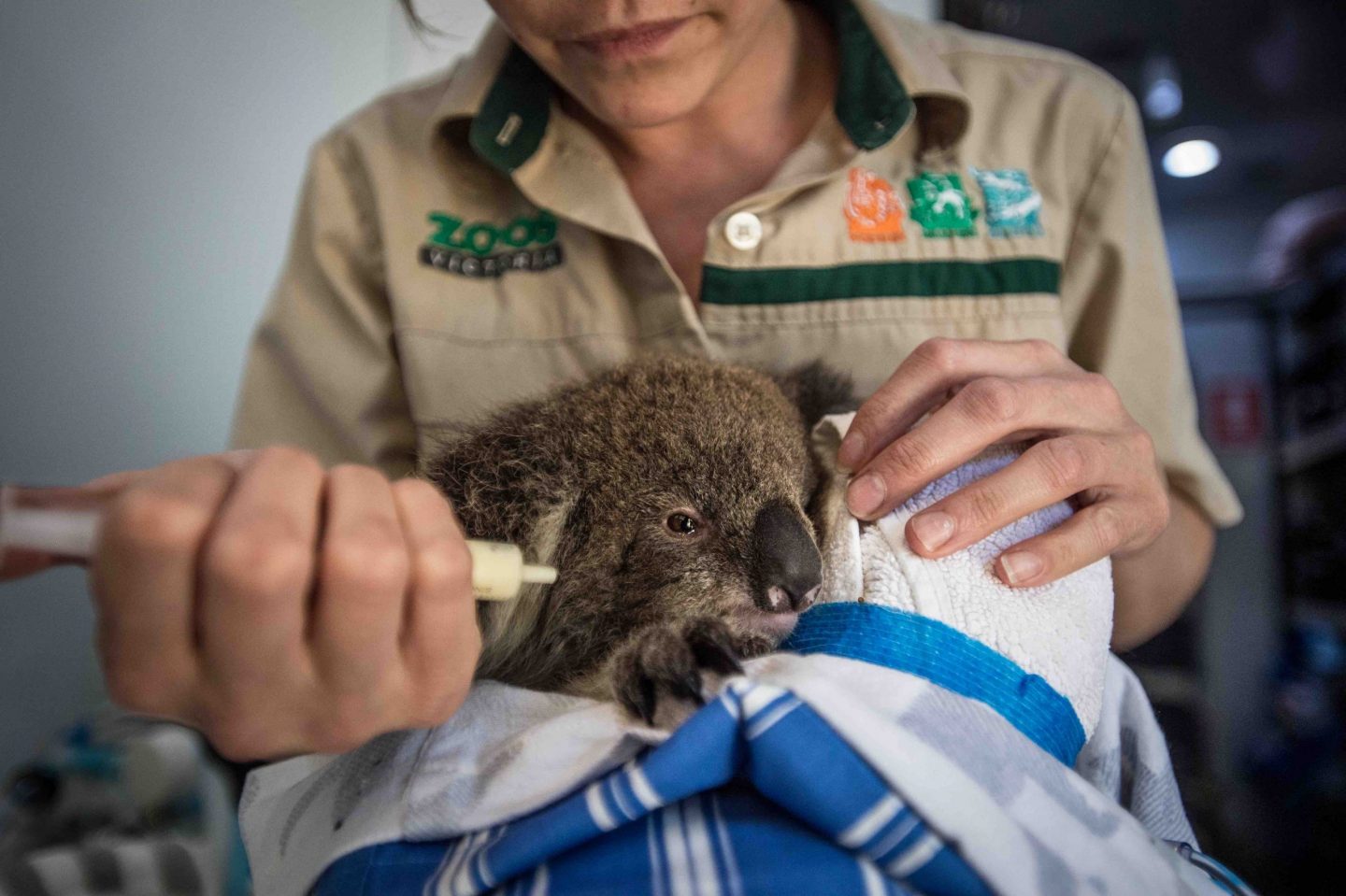 Koalas suckling desperately from plastic water bottles while their tired bodies are held up by human hands. Kangaroos with their skin shredded red from major burns. Trees splintering and smoldering on the ground. Red skies and billowing clouds of black smoke. These are just a few of the scenes from some of the worst fires that impacted Australia and the Amazon—biodiverse areas associated with bounties of flora and fauna—during the past half-year.

The Amazon rainforest and Australia have made headlines since September of 2019; massive, uncontrollable fires in these regions have incinerated not only more than 26.4 million acres of land, but also more than a billion non-human animals. University of New South Wales ecologist Chris Dickman conservatively estimates that 1.25 billion animals have died in the raging fires. According to the Australian government’s Department of the Environment and Energy, Australia is a “megadiverse” country, meaning that it occupies less than ten percent of Earth’s surface but is home to more than 70 percent of the planet’s biological diversity.

In Brazil, last year, a record-breaking 72,843 fires flared up, of which more than half were located in the Amazon region. As the largest rainforest on the planet, the Amazon is home to fully ten percent of the earth’s species, including endangered species like the white-cheeked spider monkey, Milton’s titi monkey, and Mura’s saddleback tamarin. The immediate effects of the fires on wildlife in both the Amazon and Australia are significant and have been well-documented by the media. The long-term effects on the species who continue to live in these places remain to be seen.

Natural disasters impact non-human animals in many ways, not only by injuring and killing them. Disasters alter animals’ physical environments and affect the many other plant and animal species on which they rely. Fires threaten animals with uncontrollable flames and heavy smoke; floods drown animals and contaminate water and food sources; hurricanes’ and tornadoes’ violent winds fling heavy debris around and introduce diseases and toxins to new areas. In 2016, when a magnitude 7.8 earthquake hit Kaikoura, New Zealand, roughly a quarter of its population of Hutton’s shearwaters, a species of seabirds, were killed. Half of the birds’ breeding colony was buried under falling rocks. The quake also altered the seabed, and marine animals struggled to adapt to the changed environment. A volcanic eruption in Hawaii in 2018 expelled lava into tide pools, boiling the state’s largest freshwater lake and killing many animals. A Montana storm in 2019 hurled golf-ball-sized hailstones with the strength of hurricane winds; the sharp projectiles injured and killed thousands of birds. Natural disasters already have devastating consequences for wildlife, and as anthropogenic climate change increases the frequency and severity of natural disasters, catastrophes for wildlife only become more common.

Global warming may increase the risk of drought and heavy storms, plus cause a wetter Asian monsoon and more intense mid-latitude storms, among other effects, according to the NASA Earth Observatory. A 2019 National Wildlife Federation report finds that climate change is significantly increasing the risks of extinction for more than one million plant and animal species. Hurricane Irma in 2017 killed between 14 and 22 percent of an endangered species of deer in the Florida Keys, and a California drought in 2019 decimated the habitat of the endangered Amargosa vole. Some effects of human-caused climate change, such as melting ice caps and rising sea levels, affect animals gradually, while natural disasters wreak immediate, long-lasting havoc.

After Hurricane Katrina ravaged New Orleans in 2006, Congress passed the Pet Evacuation and Transportation Standards (PETS) Act, which requires states and municipalities to consider animals as part of their disaster-preparedness plans. In 2019, U.S. Representatives Dina Titus (D-NV) and Peter King (R-NY) introduced the Providing Responsible Emergency Plans for Animals at Risk of Emerging Disasters (PREPARED) Act, which proposes that all entities governed by the Animal Welfare Act, including puppy mills, zoos, and research institutions, must develop viable plans to protect the animals in their care in the event of a natural disaster. The U.S. House of Representatives’ Subcommittee on Livestock and Foreign Agriculture has been evaluating the proposed legislation since March of 2019.

Humans as a species have an obligation to make systemic changes to slow the pace of anthropogenic global warming. Natural disasters will continue to severely affect human and wildlife populations so long as humans continue to consume, pollute, and release high volumes of greenhouse gases into the atmosphere. Industrial agriculture—which also kills animals directly—is a major driver of humans’ impact on the planet. As individuals, humans are empowered to improve the welfare and survival rates of wildlife during and after natural disasters. People for the Ethical Treatment of Animals (PETA) suggests that when finding a nonhuman animal during a disaster, an individual should either lure the animal to a safe area or, if the animal is injured, transport the creature in a box to safety. PETA recommends calling a wildlife professional immediately and advises against attempting to feed, treat, or adopt wild animals. Wildcare Australia recommends, in the event of wildfires, leaving out bowls of water for dehydrated animals.

Rescuing more than just a few animals during natural disasters is often complicated and fraught with obstacles. Animal rescue organizations must employ enough staff and volunteers to perform difficult, often dangerous work. The efforts of a few skilled professionals often complement those of determined community members. During the California wildfires in 2018, the disaster response nonprofit organization MAD Dog Rescue relied on less than a dozen trained staff and more than a hundred volunteers to find, rescue, and treat stranded wildlife. Despite good intentions, animal rescues after natural disasters are not always successful. During Hurricane Katrina, animal rescuers attempted to save the many stray animal companions by transporting them from the affected area to shelters across the country. The transfers were poorly documented, resulting in many people searching for yet never again reuniting with their animal companions. Rescuing, treating, and rehabilitating animals during and after natural disasters can be dangerous, frustrating, expensive, and disappointing—and successful or even satisfactory outcomes are not guaranteed.

Animal Wellness Foundation Director of Federal Affairs Holly Gann, in support of the PREPARED Act, states, “Disasters don’t discriminate … they threaten people and animals.” Combatting the progression of climate change and legally mandating the creation of emergency-preparedness plans for animals are both necessary steps to ensure animals’ welfare. Humans may be an “important” species on this planet, but our obligation to maximize survival rates during natural disasters extends to many more species than just our own.