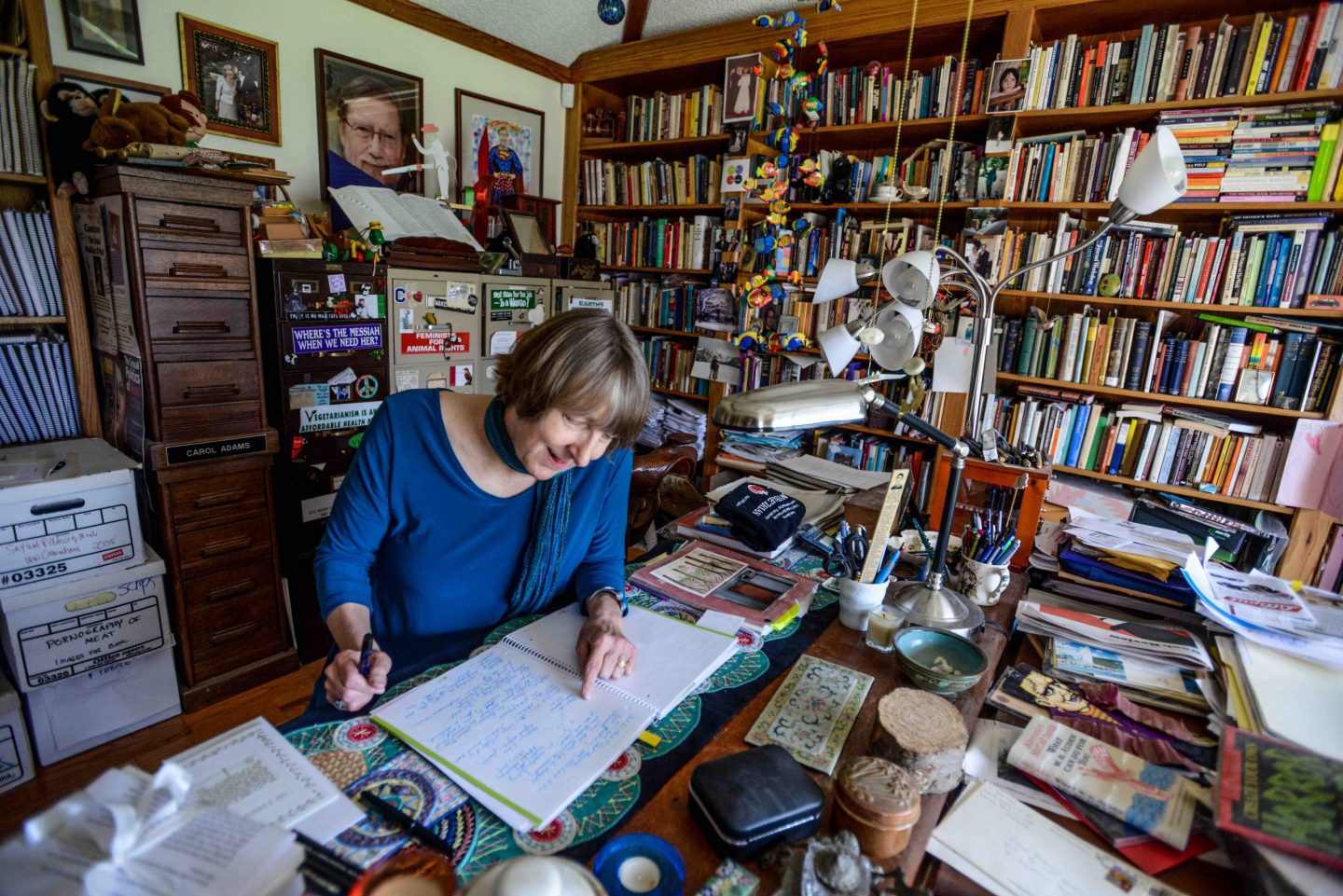 It is the thirty-year anniversary of the publication of The Sexual Politics of Meat, a pioneering book based in feminist vegetarian/vegan theory, that in the current age of #MeToo, has become more relevant and influential than ever before. But as its author, Carol J. Adams, states, the recent #MooToo analogy—made popular by author Peter Lovenheim in the Los Angeles Times this month, stating the “abuse of dairy cows is a feminist issue”—along with other popular feminist vegan slogans, may actually limit this important messaging. In fact, she says, such slogans can add to the further oppression of animals, “while mystifying the human sexual exploitation being invoked.”

Vegan feminists widely recognize that animal agriculture reduces female animals, both physically and symbolically, to certain body parts and bodily functions. Adams describes this as reproductive exploitation (further noting that “male animals are also reproductively exploited for their semen”). Adams says that some popular feminist vegan messaging, such as #MooToo, assertions that “real feminists don’t eat eggs,” and “descriptions of cows being raped,” may function in similarly reductive ways.

“Focusing on specific aspects of a female animal’s life can reproduce the oppressors’ viewpoint, reducing the cow to her body and to a specific experience in her life, when her entire life is wretched,” Adams says. “When we say feminists should empathize with the cow’s loss of the calf, or with the cow having her milk taken from her, we’ve fragmented the cow’s life to the point we want to use, while also making a presumption about human femaleness.” Adams points out that not all women have been, or want to be pregnant, “and some men can lactate.”

Analogies like #MooToo, says Adams, come from a place of anthropocentrism—a human-centered perspective “which is what we are trying to defeat as vegan activists.” What we’re saying through such analogies, Adams explains, “is the cow can’t represent her own need for liberation. That we always have to go back and use an anthropocentric anchor: if it’s terrible because it’s like my nursing [my baby], then I’ve created an anthropocentric argument. Why do I have to find touchstones common to my experience?”

Adams asks, “#MooToo, what does it miss? When we analogize, we may lose some of the most important insights in the original protests, the original analysis.” For instance, she notes, “in the case that relaunched the #MeToo movement, Harvey Weinstein—who was just convicted of first-degree criminal sexual act and third-degree rape—didn’t want babies from his victims, as the dairy industry and the chicken industry do; he wanted temporary captivity and long-term sexual accessibility, unlike animal agriculture which wants complete accessibility amidst captivity, and then kills their victims.”

Messaging like #MooToo, says Adams, “is retrograde posing as radical; it reinforces rather than resists, truncates rather than elaborates.” Such messaging allows animals to become absent referents within their own stories. “Such slogans appeal to the lowest common denominator, which is what oppression is all about: reducing everyone to their lowest common denominator then using it for others’ interests. Why would we do that?”

“We have to think outside the billboard,” Adams says, referring to PETA’s You Can’t Claim to be Feminist and Still Eat Eggs campaign. “The feminist-vegan analysis is not focused solely on [the] female experience. The appeal to feminists to be vegan shouldn’t be about identification. Not only because that essentializes bodies, and keeps the gender binary in place, but also because it ignores the insights of feminist theory.”

Adams notes further that messaging telling feminists that they should be vegan, or that they shouldn’t consume animal products, is not really feminist at all. “Should, should, should—this is not liberation, telling feminists they should do anything,” she says. “You take something that’s a really robust, and—I’d like to think—inclusive theory, and you reduce it down to ‘you’re a woman, you shouldn’t drink milk.’ So you’ve got an almost anti-feminist stance, appealing to feminists,” she explains. “The whole point was we grew up in a world that was telling us everything we should do as girls and then women. Let’s get rid of the ‘should.’ Why can’t we trust people to experience a change in consciousness by receiving information?”

An important part of that information, says Adams, “is recognizing that we live in a society structured on oppression,” and recognizing what brought animals and certain groups of people to this state of oppression in the first place. “We have to look at where this started: white, patriarchal, colonial powers, importing cows to the land that is now North and South America,” she says. “Midwestern destruction of the land, and the people who lived on it, and the near extinction of the buffalo; it’s all related to a cow culture—we live in a fetishized cow culture.”

White, male, colonialist patriarchy is further responsible, states Adams, for “creating a value in animal products, for imposing a view about animal protein, and creating an almost xenophobic disparagement of non-animal proteins. This idea that you have to survive on cheese or milk or the dead body of a domesticated cow, it’s all part of the creation of both national and gendered identities that, at this point, in the 21st century, we should be challenging.”

To take on that challenge, Adams asserts that we can look to feminist theory and analysis about violence, about objectification, about overlapping oppressions, and apply those perspectives “to a discussion of those beings on the other side of the species division.”

“Settling for analogies derived from feminist activism, or making appeals of ‘femaleness,’ instead of invoking feminist theory, reduces feminism to a cudgel,” she says. “The road to feminist-veganism is not through #MooToo.”