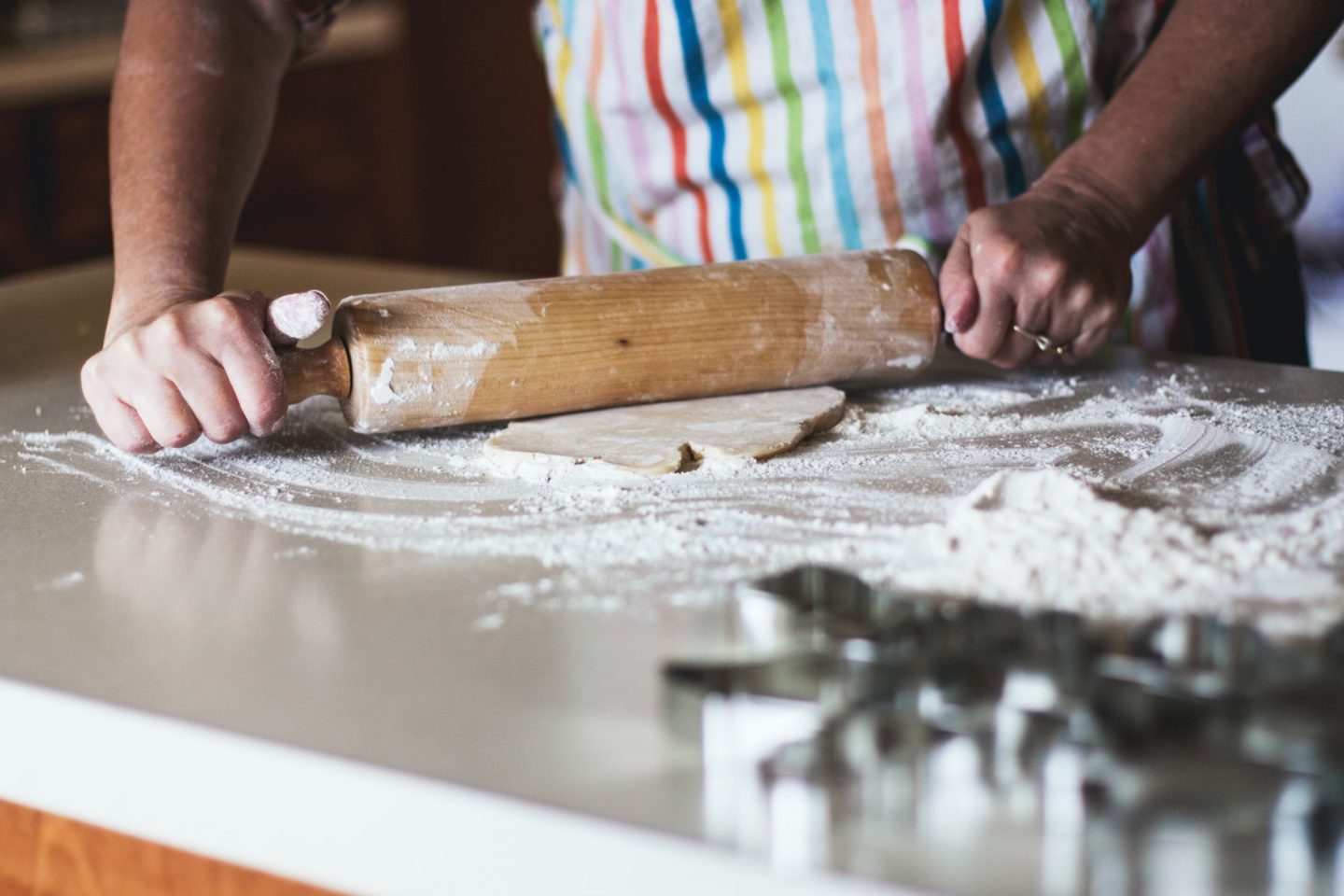 Zoo Animals Are Always on Lockdown

Rolling out dough on her laminate table, my grandma could make hundreds of perogies in an afternoon. She would freeze dozens of them, ready-made for visits from hungry grandchildren. (My appetite for them was such that she called me “perogy girl.”) I’ve always wanted to prepare perogies in bulk like my grandmother did—rolling out metres of dough, cutting out circles with a glass, filling them with mashed potatoes, folding them into dumplings—but my busy adult life never seemed to afford the time. Then the COVID-19 pandemic began, and finding myself suddenly and largely confined to home, I got to cooking—because I was hungry, and as a form of protest against our collective circumstances.

The modern industrial food system, by exploiting animals for profit, creates and maintains the conditions that cause pandemics like the current COVID-19 outbreak. COVID-19 likely originated at a wildlife market in China, but the next pandemic could easily stem from a concentrated animal feeding operation here at home. A strain of pathogenic bird flu, known as H5N8, that originated in backyard poultry farms in Germany, is currently spreading in Eastern Europe, the U.S., and South Africa. The 2009 H1N1 flu outbreak was likely caused by either shipping farmed pigs between continents or testing swine viruses in laboratories to develop flu vaccines for the animals; the 1918 Spanish flu arose in a similarly exploitative way. Farming is the practice that most commonly puts humans in close proximity to animals. Sixty percent of the animals currently alive on earth are controlled by humans raising them for food; of the remaining 40 percent, fully 36 percent are humans and only four percent are free-roaming wildlife.  Zoonotic diseases, like COVID-19, are a natural result of humans’ ongoing exploitation of animals.

Profit motive—which drives humans to encroach upon wildlife habitats and confine animals for food—indirectly creates the conditions for pandemic disease. The globalized corporate food system in the past 60 years has consolidated and made more efficient the production and distribution of commodities like grain, potatoes, tomatoes, meat, and dairy. Consolidation, the process by which fewer and larger companies control ever-greater shares of the market, systematically puts corporate profits ahead of animal rights, human rights, and environmental concerns; for corporations, share price is—almost exclusively—what matters. Large and very large farms, whether ostensibly family-run or corporate-owned, operate similarly and control 60 percent of farming revenue in the United States. Though ninety-seven percent of farms are still technically considered family-run, they face enormous pressure to adopt corporate practices in order to compete with the largest farms’ economies of scale. The intense competition, while challenging for many farmers, is disastrous for farmed animals.

The industrialized food system creates health crises not only by occasionally causing pandemics but also by consistently making the least healthy foods the most readily accessible. In her book Meathooked, Marta Zaraska describes how ultra-powerful animal agriculture lobby groups pressure governments to continue subsidizing meat and dairy despite known health risks. Fast food outlets then market artificially cheap meat and milk to poor and oppressed populations. Marginalized peoples, particularly people of color, are disproportionately affected by the proliferation of high-fat, processed foods. That they are also the most impacted by this pandemic is no coincidence. The modern food system perpetuates colonial hierarchies at home and around the world.

Cooking—vegan and at home—is a way to protest against the profit- and animal exploitation-driven systems that got us here. Individuals may be ill-equipped to entirely opt-out of the modern food system, but that doesn’t mean that they are completely powerless. In the book Protest Kitchen, Carol J. Adams and Virginia Messina write, “Believing that you can do something”—and actually doing it—“to relieve the suffering of someone else helps you feel more compassionate.”

Taking action imparts power. That something could be boycotting animal products, chocolate from child slavery, or processed foods from conglomerates like Nestle and Kraft. It could mean ordering community-supported agriculture boxes for delivery, growing your own produce in containers, or perhaps simply cooking every meal at home, for the first time, during this pandemic.

Adams and Messina point out that vegan home cooking, necessitated by a pandemic or not, protests the status quo in several important ways. It enacts climate justice: animal-based foods use about four to 26 times more water and about six to 20 times more fossil fuels than plant-based foods. It fights for social justice: climate change and pollution, largely driven by animal agriculture, affect the people of the Global South significantly more than those living in industrialized nations. Cooking vegan at home fights gender stereotyping: opening vegan home cooking to everyone dispels the gendered ideas that the kitchen is a feminized place and that men need meat. And it fights animal cruelty: eating only plants does not cause animals to become humans’ food. Vegan cooking at home empowers each of us to take personal action, though it does not eliminate the need for broader systemic change.

Adams and Messina’s call to the kitchen is markedly different from some nostalgic, misguided longing to return to the 1950s. The straight white woman in the kitchen, happily serving her husband as an unpaid homemaker—regressive politicians use images such as these to stir up xenophobia and other social divisions. The authors of Protest Kitchen also do not call for a return to the idealized family animal farming of the twentieth century, but rather advocate for valuing animals as members of our sentient community—rather than subjecting their bodies to exploitation for profit.

The 1950s, Adams and Messina also note, were a time when compassion and caring, negatively associated with sentimentality, were strictly confined to the private sphere. A misogynistic binary developed: the home was viewed as the place to express love and compassion, while rugged individualism and masculinity ruled in the outside worlds of business, society, and politics. Openly caring for others, including animals, was considered as a sign of weakness.

Cooking is an act of resistance because it reasserts a sense of personal autonomy—we recognize that we can feed and provide for ourselves without the McDonald’s of the world. The act of cooking also re-establishes, with every meal, that caring for others is a sign of strength, not gendered weakness. Perhaps the desire to care for others in this time of crisis is a reason why so many of us have turned to cooking now. This “caremongering” trend is showing the strengths of our human communities, even with the many restrictions of physical isolation in effect. Right now, caring for other humans may mean buying groceries for seniors, leaving soup at your neighbor’s door, exchanging recipes online, or cooking with family members. Community is what cooking is all about, even in this age of social distancing.

Faceless, industrialized systems are what really need to change—private individuals desperately and urgently require an effective antidote to corporate greed and the politicians who profit from it. Vegan cooking at home is an action we each can take today, pandemic or otherwise.

My grandma knew cooking. For her Ukrainian-born family, Westernization following immigration to Canada meant an increase in the consumption of meat, dairy, and processed foods. Her diet, along with cigarette smoking, likely contributed to the heart disease and diabetes that she endured for her last two decades of life. I can only hope to cook as masterfully as my grandmother did, but regardless of my culinary talent, the way I cook today reframes the domestic space into a vegan one, a place of protest. The almost-literal call to our kitchens in the face of pandemic denotes a return, anew, to home and community. Practicing veganism is a powerful way to demonstrate compassion—for each other, for animals, and for the natural world—through the daily communal practice of cooking.