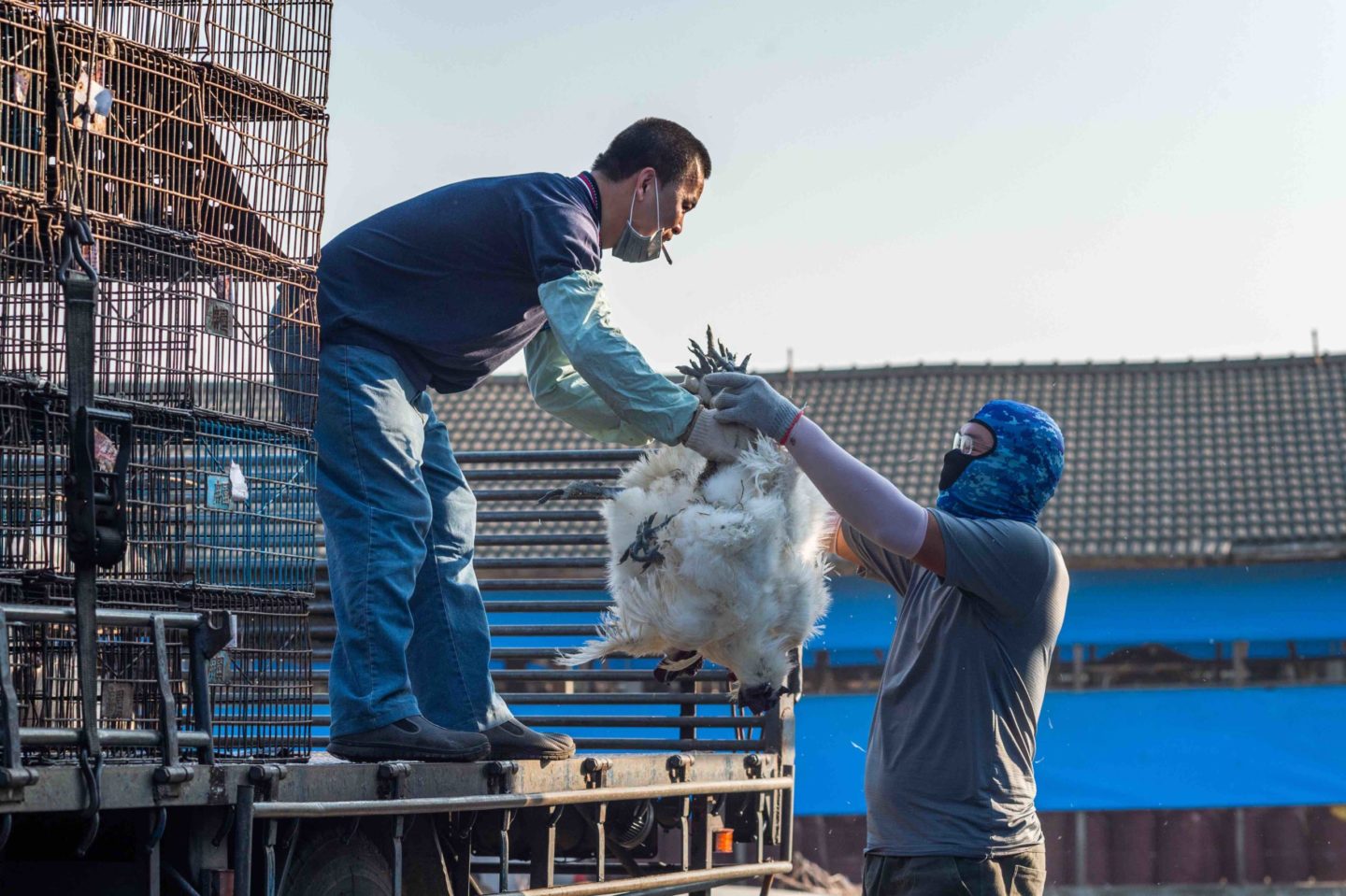 Slaughterhouses around the world have become breeding grounds for COVID-19. Take High River, Alberta, for example: 949 of the 2,000 employees at its Cargill slaughterhouse tested positive for the coronavirus as of May 6, according to reporting by the CBC. This facility is the centre of one of the largest single-site outbreaks of the COVID-19 pandemic in North America. The facility’s outbreak occurred despite multiple assessments by health inspectors that the plant’s measures to stop the spread of coronavirus were proving effective. Yet locker rooms and production lines remained cramped, creating ideal conditions for COVID-19 to proliferate. Employees also report that Cargill attempted to lure them back to work while still sick by downplaying the risks of the disease. These anonymous reports provide rare, important glimpses of the deplorable conditions inside meat-processing facilities, and expose attempts to suppress concerns about worker safety.

Stories of coronavirus outbreaks in slaughterhouses, such as those coming from the High River beef processing plant, are not unique. Factory Farm Collective, a Canadian animal rights group, is tracking cases of coronavirus tied to meat-packing plants across Canada. Two other meat-processing facilities—owned by Olymel and JBS—are each reporting over one hundred cases of COVID-19. Ten meat-processing facilities in Ontario have confirmed instances of coronavirus, including 44 cases at a Conestoga Meats facility in Breslau. Similar outbreaks are occurring across the United States, including at a Smithfield plant in South Dakota, which reported over 700 infections, and at a Tyson plant in Iowa, with over 1,000 confirmed cases. While some protective measures have been implemented, sufficient safeguards are demonstrably not in place to stop the virus from rapidly spreading in these types of facilities.

The COVID-19 crisis is demonstrating the importance of whistleblowers in meat-packing plants. A whistleblower in the context of industrial animal agriculture is someone with firsthand knowledge of the operations of a factory farming facility who chooses to publicize or report on observed problems inside the facility. In the cases of the COVID-19 infections spreading inside the Cargill plant in Alberta and the Smithfield plant in South Dakota, whistleblowers played essential roles in drawing attention to the outbreaks. Revelations coming from these facilities’ whistleblowers are so troubling that meat-processing companies are seeking legal protection from potential workplace health and safety lawsuits. Under pressure from meat companies, President Trump issued an executive order on April 28 that allows meat-processing facilities to remain open during the COVID-19 pandemic while limiting the businesses’ legal liability. Nebraska recently issued a “gag order” that prohibits further reporting on COVID-19 cases in meat-packing facilities; at least 300 slaughterhouse workers in the state have already been infected with the virus. Nebraska’s gag order is insidious and clearly dangerous, as such restriction on free speech inhibits the sharing of crucial, life-saving information about the pandemic with the community, state, and the entire nation.

Prior to the onset of COVID-19, the Ontario Government was already considering Bill 156, a proposed law that would provide legal protection to meat-processing companies against whistleblowers and activists. Bill 156—also known as the Security from Trespass and Protecting Food Safety Act, 2020—would, among other measures, increase the penalties for trespassing in designated “animal protection zones” such as farms and food-processing facilities. Ontario’s Legislative Assembly could vote on this bill as early as June 15. If passed, the bill would increase the maximum penalty for trespassing to $15,000 for first offences and $25,000 for additional offences. Current trespassing laws impose a $10,000 maximum fine, though the fines, in practice, tend to be much lower, according to the Ontario Federation of Agriculture. The bill is being framed by agribusiness as a tool to protect farmers and ensure food safety. Critics are calling this bill an “ag-gag” law since its overly punitive restrictions and punishments would effectively silence those who seek to expose the appalling conditions in the animal agriculture industry. The debate over Bill 156 is causing a clash between the agriculture industry and concerned citizens.

One of Bill 156’s most troubling features is its onerous restrictions on whistleblowers. Provisions in the bill would make it illegal to gain access to an animal agriculture property under “false pretenses.” Consent to access an “animal protection zone” could be legally invalidated if it suits the preferences of the business owner. Agricultural employees who share information about abusive treatments of animals, or the spread of infectious disease, could be found to have accessed the agricultural facility under Bill 156’s “false pretenses.” Bill 156 would have a chilling effect on potential whistleblowers employed by factory farms.

Many citizens, including law professors and journalists, are concerned about Bill 156 allowing factory farm owners to legally retaliate against employees who report on poor conditions within their facilities. Transparency is necessary to protect workers from hazardous work environments, animals from inhumane treatments, and consumers from unsafe foods. With a law akin to Bill 156 in place, workers like those at the plants in Alberta and South Dakota may not have publicly released information about coronavirus outbreaks for fear of legal action. Bill 156’s provisions at once represent an infringement on freedom of speech, a decline in worker protections, a public health risk, and yet another threat to the wellbeing of animals.

Proponents of Bill 156 claim that the bill is meant to stop activists from interfering with or compromising food safety—also known as biosecurity—on farms or in meat-processing plants. Yet no documented cases exist of diseases entering the food supply chain as a result of direct actions by animal rights groups. The COVID-19 pandemic outbreaks in slaughterhouses show that the prevailing health risks created by agribusiness in no way involve protesting activists, but rather are inherent to the factory farming business model itself. Biosecurity failures, such as the E. coli outbreaks at Ontario slaughterhouses in 2019, or the Canada-wide Salmonella outbreak that occurred in 2018-2019, are disturbingly common. The practices common to factory farming, rather than the work of activists, cause, and proliferate biosecurity issues. Animal activists merely draw attention to the many abuses and injustices of animal agriculture.

Bill 156 has many other flaws. Under this law, agricultural workers would be able to arrest alleged trespassers, yet Bill 156 offers no clear guidance on how farm workers would carry out such arrests. Legally allowing this kind of vigilante justice greatly increases the risk of animal rights advocates being harmed or killed while engaging in direct actions at slaughterhouses or farms. Animal activists, as Canadian citizens who deserve equal protection under the law, should not be subject to such life-threatening risks. Though controversial to some, activists serve a valuable role by holding animal agriculture farmers and companies to account for cruel, unsanitary, and unsafe conditions. Direct actions, such as those that recently occurred at the King Cole Duck Farm and the Les Porgreg pig-breeding facility, expose the inhumane, shameful conditions of animal agriculture facilities. Activist work, already risky, would become exceedingly more difficult and dangerous under Bill 156.

COVID-19 is making clear that Canada has a food safety problem—but ag-gag laws like Bill 156, if passed, would only make existing problems worse by further limiting much-needed transparency in the food industry. Whistleblowers and activists provide essential checks on animal agriculture at a time when greater supervision is desperately warranted. Every citizen can agree on the need to protect the biosecurity of Ontario’s foods, but there is no evidence that Bill 156 would achieve that goal—and plenty to indicate that it would accomplish the opposite.