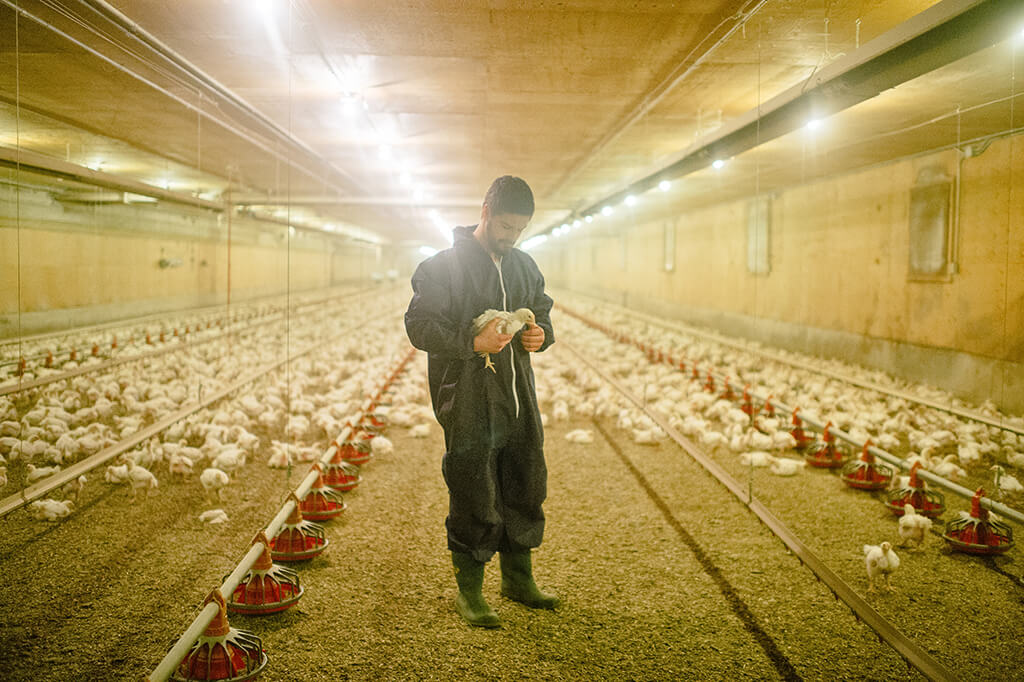 School Principal Says ‘No’ to Animal Rights Club. This Student Is Fighting Back.

Annual production totals in the EU are up 25% since 2010—an increase of about 7 billion pounds of chicken, turkey, ducks, and geese in less than a decade.

Over the past 10 years, global demand for chicken has steadily increased and with it, Europe’s poultry production centers have become overrun with factory farms. Although farms with more than 5,000 broilers barely represent 1% of the total number of broiler farms in the EU, they account for more than nine out of 10 broiler chickens.

Today, the European Parliament’s agriculture committee will set a direction for the next seven years of the EU’s Common Agricultural Policy, amid mounting concern from nearby residents about air pollution from factory farms and calls from local farmers to support the move back to family farms.

Breeding chickens to be fat and lame

According to a new BBC Countryfile investigation, UK chicken producers purchased more than 600,000 pounds of ionophores in 2017.

Ionophores are feed additives technically not classified as antibiotics. The European Food Safety Agency points out that the additives pose no risk to humans—but says nothing of the animals being fattened by them.

Feed additives like ionophores cause modern broiler chickens to grow at rates three times faster than their archeological ancestors, which date back more than 8,000 years. With the advent of the industrial food system–and the accelerated growth cycles and slaughter speeds that came with it–humans have irreparably damaged the natural lives of chickens and continue to do so by the billion.

Every year, 65.8 billion chickens live and die on factory farms. They spend their lives crowded into industrial feeding operations where they barely have enough room to flap their wings. Many suffocate and die to due overcrowding.

Over the course of just 40 days, the chickens reach full size. This unnaturally fast growth cycle and lack of mobility take a toll on their bodies. Many develop lameness and as a result, they are in constant pain.

After the birds’ accelerated growing period—which causes extreme amounts of stress on their bodies—they are sent to slaughter. Factory farmed chickens live their lives brutally confined without access to sunlight for less than six weeks before they are killed, processed, and sold by the world’s largest food companies.

Tyson Foods slaughters an average of 35 million chickens per week.

Who is eating all this chicken and where is it coming from?

Chicken is quickly becoming America’s meat of choice. Americans eat more chicken than any other meat, about 85 pounds per year.

Poultry meat consumption in the EU is also on the rise, forecasted to reach 32 billion pounds per year by 2027. That means the EU could set a new record for poultry consumption in each of the next 10 years. The U.S. set a record for chicken consumption back in 2017. Consumption has been slowly leveling off since then, but production, well, that’s a different story.

According to PEW Trusts, in 1950, more than 1.6 million farms grew chickens for American consumers. By 2007, 98% of those farms were gone, even though Americans were eating more chicken. Broiler sales jumped by 8 billion birds (1,400%) over the same time period.

Over the past 50 years, industrial chicken producers planted—with frightening success—an expectation in the minds of consumers around the world: Our chicken is cheap. Come and get it.

While most European and U.S. chicken stays at home to meet the growing demand for cheap chicken, poultry producers in the EU and U.S. also supply more than half of the chicken distributed around the world. Surprisingly, they turn a significant profit selling parts of the chicken Western consumers have no interest in eating, like beaks and feet.

In China, chicken feet are commonly used in the preparation of traditional Cantonese dim sum, soups and bar snacks. As chicken began to flood the global meat market, it became common practice for countries to ship their unwanted chicken parts overseas to China and other Asian countries.

French poultry producers have been shut out of Chinese markets for years, due to a ban put in place on French poultry breeders in 2015 after an outbreak of H5N1 bird flu that put nearly 15,000 birds at serious risk of infection. Before China enacted the ban, France supplied the country with much of its broiler chickens. China lifted the ban on French poultry last week.

But France is not the only one reentering the Chinese chicken market. Some 50 million U.S. chickens also fell to the bird flu epidemic in 2015, resulting in a number of since-lifted bans on U.S. imports, except China. The country is currently in talks with the Trump Administration to lift its ban on chicken imports from the U.S.

“When China was going strong, basically every chicken company in the U.S. was shipping their paws there,” Jim Sumner, president of the USA Poultry & Egg Export Council in Georgia, told Delmarva Now. “It really was a major economic benefit to all of those companies.”

When China banned the import of U.S. chicken, the country’s third leading producer, Sanderson Farms, reported losses upwards of $50 million a year directly tied to the lack of business from chicken exports to China.

No one is denying that the chicken industry is “big business” with or without China’s export market, but the willingness of U.S. politicians to work with chicken producers to maximize profits in place of animal welfare is problematic. Sending chicken feet to China is yet another example of one-sided, industry-favoring politics that is kind to farmers and despicably cruel to chickens. When will Washington stand up for animals?

Bottom line: At any given time, there are about 23 billion chickens alive–or three chickens for every one human being on earth–and nearly every single chicken exists solely to be farmed by humans for food. Something has to change.