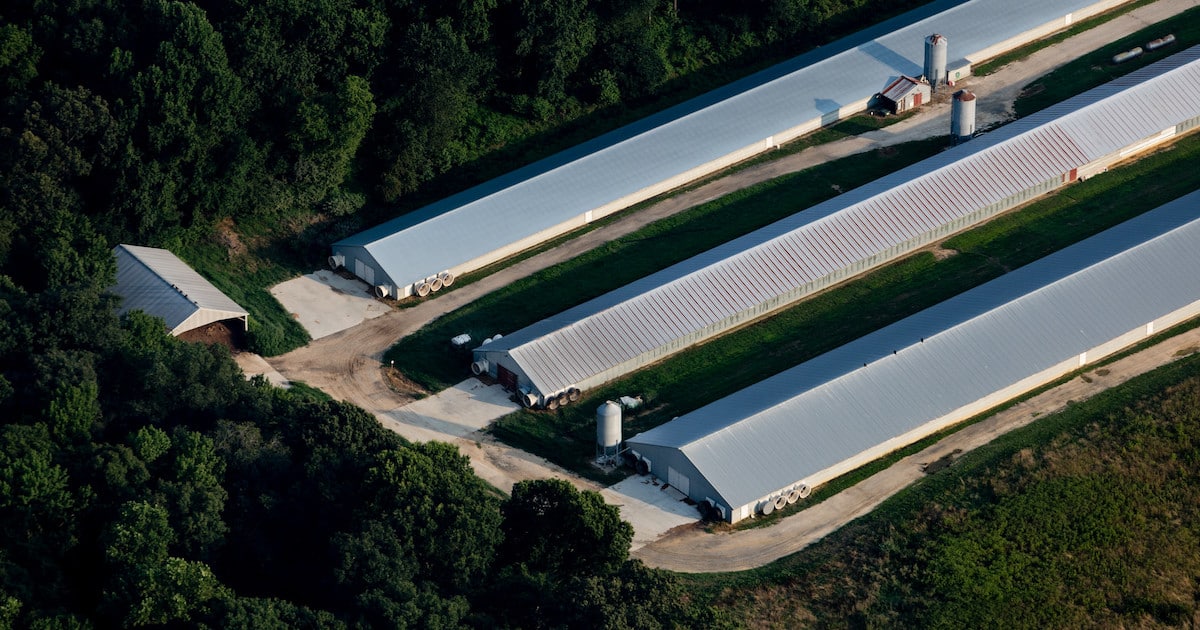 Powys, the largest county in Wales, is full of rolling green landscapes, mountains, lush river valleys, and historic market towns. It has also been called the chicken farm capital of Wales, with farms along the River Wye blamed for turning the water into a “pea soup” of algal blooms. With 156 intensive chicken farms each housing more than 40,000 birds approved by the local planning authority in the past five years alone, it was starting to seem like Powys was on an unstoppable chicken farming frenzy.

But finally, a bump in the road: Powys County Council has admitted to acting unlawfully in granting planning permission for a 110,000 broiler chicken intensive poultry unit (IPU) last September after local campaign group Sustainable Food Knighton (SFK) crowdfunded a judicial review of the decision. The planning officer had concluded without evidence that disposing of chicken manure by spreading it on fields wouldn’t adversely impact the local community or environment. The application will now likely be rejected.

In a statement following the council’s admission, SFK spokesperson Camilla Saunders noted that while the Minister for Environment, Energy, and Rural Affairs Lesley Griffiths agreed that farming must become less intensive, no action had yet been taken. “Refusing any further planning applications for IPUs and developing coherent agricultural policies that support farmers and their local communities would be a good start,” Saunders said.

Luckily, SFK is not alone in pushing back against factory farm expansion in the astounding absence of political leadership. Grassroots organizations and NGOs are taking on the fight themselves, building on growing public support for less animal agriculture.

The number of animals being raised in intensive confinement has increased significantly in the last decade alone. China now produces more hogs than any other country and is building a new mega-farm near Nanyang with the aim of rearing 2.1 million hogs a year, making it the world’s single biggest industrial hog operation. In the U.S., where the vast majority of meat comes from Concentrated Animal Feeding Operations (CAFOs), there was a 14 percent increase in factory-farmed animals between 2012 and 2017. In the U.K., there has been a 26 percent rise in large intensive pig and poultry farms since 2011. There are fewer animals on these farms than the US-style CAFOs—the UK has around 800 CAFO-sized farms—but the animals are nonetheless reared in similar intensive indoor conditions.

This uncontrolled expansion is now a major driver of environmental destruction and pollution and a significant threat to public health. Run-off from manure and fertilizer creates dead zones in seas and rivers; growing feed crops and extensive cattle grazing causes massive deforestation; manure fills the air with hazardous fine-particulate pollution. A recent study in Nature and another by thinktank Chatham House show that unless humans massively cut our meat consumption in favor of plant-based diets, thousands of species will lose significant portions of their habitats in the next few decades. With a million species already at risk of extinction globally, we simply cannot afford to destroy more habitats.

Encroaching into ever more wildlife habitat also brings people into closer contact with wild animals, giving more opportunities for viruses like COVID-19 to jump from animals to humans. With animals kept in their thousands in unsanitary indoor conditions, factory farms are also perfect breeding grounds for viruses including avian flu and swine flu. Just last week, Russia reported that seven poultry farm workers became the first people in the world to be infected with H5N8, a strain of avian flu that is deadly to birds. Overuse of antibiotics to keep disease at bay in intensive farms and speed up animal growth has also been driving the development of drug-resistant pathogens, jeopardizing our ability to treat many types of infection.

Though factory farming is on the rise, the public in some parts of the world is increasingly turning against it. A survey by the ASPCA of 1000 American adults last year found that 89 percent were “concerned about industrial animal agriculture” including its impacts on animal welfare, worker safety, and public health through pollution and zoonotic disease risk. In the U.K., a recent poll of 2000 adults commissioned by vegan charity Viva! found that 85 percent of those surveyed wanted an immediate government ban on intensive farming methods.

While this has not yet amounted to systemic efforts to curb factory farming, there is a growing number of communities trying to stop new farms from being built.

As demonstrated by SFK’s victory, fighting new farm permit applications is a key way that communities in the U.K. are taking on factory farming. Communities in Scotland have formed campaign groups to fight an application for an intensive poultry farm and to ask the Scottish government to impose a moratorium on new farms. Local residents in a town in Shropshire preceded SFK in launching a crowdfunding campaign to bring a legal challenge against the county council for granting planning permission for an intensive poultry farm “without properly considering the impacts that the farm would have on our health and our environment.” In June 2019, their case was successful in the Court of Appeals.

Humane Being, a new volunteer-run non-profit, monitors planning applications in the U.K. for new intensive farms and encourages people to submit objections to them, managing to generate a few hundred objections at a time. “We thought even if we didn’t have a chance of stopping them, we would give the developers a headache,” says Jane Tregdett, Humane Being’s founder and director. Through its Scrap Factory Farming campaign, Humane Being is also crowdfunding to bring a legal challenge against the UK government to force it to end factory farming—the first such challenge in the world.

In Argentina, the public has pushed back on plans to use Chinese investment to turn the country into one of China’s main pork suppliers. Fearing the pandemic potential of industrial hog farms following recent devastating outbreaks of African swine fever in China, half a million Argentinians have signed petitions to stop the plan from going ahead, with support from dozens of NGOs and Argentinian celebrities. “You could almost say China is outsourcing the risk of a repetition of such outbreaks by moving production offshore,” biologist Guillermo Folguera told the Guardian. As a result of the public outcry, the government suspended its plan to sign a memorandum of understanding with China which would have set in motion the plan to build 25 industrial hog farms in Argentina.

Across the U.S., grassroots groups have been working with NGOs to fight factory farm expansion, often focusing on specific proposals for new farms that are being sited increasingly near to where people live, particularly low-income communities of color. But lawmakers are also beginning to push for change.

“People from across the country are seeing the impacts of our hyper-consolidated food system,” says Krissy Kasserman, the Factory Farm Organizing Manager of Food & Water Watch. “Rural communities are declining, independent farmers are struggling, and the supply chain disruptions from the pandemic are fresh in people’s minds. It’s clear our elected officials are seeing this growing demand for change, and they’ve responded with some of the most visionary legislative proposals we’ve seen in years if not longer.”

Among these proposals is the Farm System Reform Act bill introduced by Senator Cory Booker in 2019, which aims to immediately stop the expansion of factory farming and phase it out by 2040. State lawmakers in Oregon, Iowa, New Mexico, and Maryland are also trying to introduce legislation to enact moratoria on new factory farms, but despite notable public support, they are struggling to make headway. Nonetheless, the fact that factory farming is meeting any political resistance in the U.S. is a sign of how much attitudes have changed towards industrial meat and dairy production in recent years.

The meat and dairy industries like to put the onus on consumers for the existence of factory farms. They are only trying to meet the demand for animal products, and if the public wants it cheaply, this is how it’s done. But consumer surveys and public reactions to footage from inside factory farms frequently show that people do not want their food produced this way.

The meat and dairy industries and complicit governments also arguably drive demand for factory-farmed products by influencing dietary guidelines and funding huge marketing campaigns promoting meat-eating and dairy consumption. Governments also subsidize meat and dairy production so that consumers pay less than the true cost of animal products. A report by the European arm of the World Health Organisation stresses that “consumers can be highly responsive to food prices and that taxation and subsidies are an effective means of influencing consumption of targeted foods.”

Massive amounts of meat and dairy also go to waste every year, indicating that the production of animal products is outpacing demand. Higher levels of consumption of chicken in the U.S. in the past have been caused by an oversupply of chicken causing prices to drop, rather than an increase in demand. Meat production in the U.S. and elsewhere is also increasingly being used to serve an international market rather than satisfy domestic demand.

An uphill battle remains to rein in factory farming. But with increasing public pushback against the industry for its harmfulness to animals, people, and the planet, and an ecological and moral imperative to bring it to an end, that goal is at least getting closer. “Overhauling our food system will require policy change,” says Kasserman, “and policy change starts with building a movement to hold our elected officials accountable to us, their constituents—not the corporate interests that currently dominate our food system.”