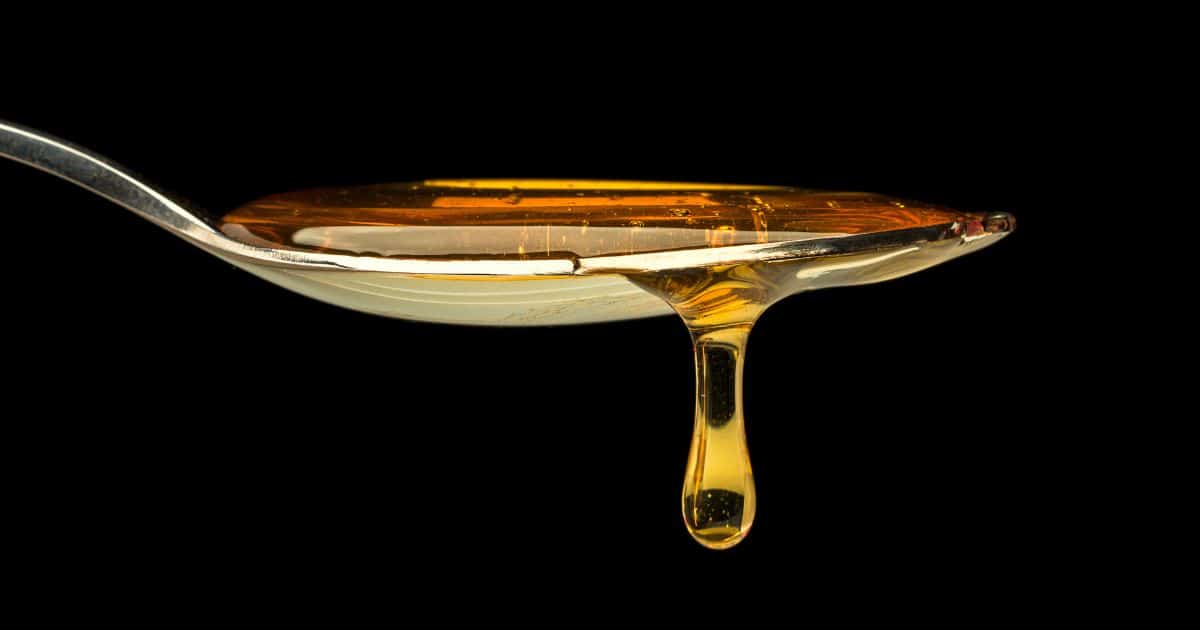 Honey is a thick, sticky liquid that is golden in color. Made mostly of sugars, the sweetener is made by honeybees who live in manmade “hives” that are quite different from their natural habitats. Farmed bees are often forced to live on sugar water rather than their own honey. But honey production doesn’t just affect honeybees. It also endangers the lives of native bees and other pollinators, some of which are facing extinction.

Honey is a food produced by honeybees for their immediate nutrition and for eating later as a way to survive harsh winter months when flower nectar is not available to them. When produced for human consumption, honey is frequently used as a sweet spread, sugar substitute and a natural sweetener.

How Do Bees Make Honey?

Honey originally comes from flower nectar, which bees then draw out using their proboscises, or tubular tongue-like mouths. Honeybees are reported to visit about 1,500 flowers just to fill their specialized second stomachs used for the nectar-digestion process, before they return to their hive. Inside the bee’s body the nectar is transformed into honey, which the bee regurgitates into the mouths of other bees, who eventually spread the honey into honeycombs within their beehive.

Why Is Honey Not Vegan?

Honey is not considered vegan because it is derived from animals, even though it is primarily made from plant-based ingredients. The methods used by commercial beekeepers neglect bee welfare and unnecessarily shorten their lives.

Honey Results From the Exploitation of Bees

Queen bees are artificially inseminated with the extracted semen of up to 15 drone bees, who are in turn killed during this process by people using tweezers and syringes. Queen bees’ wings are often clipped to limit their movements. They also tend to be killed after just one year rather than living out their more natural five-year lifespan.

Selective breeding of bees makes their communities more prone to large-scale die-offs. The way that honeybees are traded and sold by mail also encourages the spread of diseases, which in turn can compromise the immune systems of entire colonies. It is standard practice for beekeepers to kill entire colonies in order to prevent the spread of infectious diseases. Finally, native bees living near apiaries can catch pathogens from farmed honeybees, including deformed wing virus and other parasitic infections.

Honey-bees were first introduced to the United States by European colonizers. A growing body of evidence suggests that honeybee farms have harmful effects on indigenous pollinators and natural ecosystems. Native bees must compete with dense colonies of honeybees, who are not at risk of extinction precisely because they are farmed in large numbers for their honey, making it more difficult for the native bees to forage for nectar and pollen.

The plight of pollinators is not being alleviated by backyard beekeeping either, and they may even be making things worse. The needs of native bees — who tend to not make honey or sting, and largely live solitary lives rather than in colonies — have been overshadowed by outcry over the detrimental impact of certain pesticides on honeybees. Honeybees also tend to pollinate non-native plants that in turn can disrupt native ecosystems. Meanwhile, most crops are actually pollinated by native bees and other insects.

What Percentage of Vegans Eat Honey?

It is unclear what percentage of self-defined vegans eat honey. The sweetener can be hard to avoid however, as it is often used as a substitute for sugar in baked goods and prepared foods.

In nutritional terms, commercial honey is virtually indistinguishable from high-fructose corn syrup. The following sweeteners are marketed as natural but are also technically added sugars that, like honey or corn syrup, can cause health problems if it makes up too large a percentage of your diet.

Maple syrup is a tree-sourced form of liquid sugar that is commonly used as a topping for pancakes. The syrup was invented by Indigenous peoples in North America who taught European settler colonists how to tap the sap from maple trees to make the food. Of the maple syrup produced globally in 2021, 80 percent was made in Canada, mostly in Quebec. The remaining 20 percent was made in the United States.

Blackstrap molasses is a byproduct of the sugar industry, derived from the sugarcane plant. It is a dark, slightly bitter syrup that is used in baking or to complement other flavors.

Barley is a grass that produces a widely eaten grain. Syrup from the plant is produced by malting — allowing the plant to begin sprouting and then drying it. This develops sugars in the grain. The European Union is the leading producer of barley in the world.

Brown rice syrup, or rice syrup, is made with rice and barley malt and is part of Korean traditional cuisine. Korean grocery stores sell rice syrups with names like oligodang and ssal-jocheong.

Dates are the fruit of a palm tree and have been cultivated for thousands of years in the Middle East and South Asia. Syrup made from dates has traditionally been used to sweeten the national cuisines of Libya, Iran, Iraq, Algeria, Bangladesh and other countries throughout the Middle East, North Africa and South Asia.

Agave nectar, also known as agave syrup, is a syrup that is made from the agave plant. The agave plant is indigenous to Mesoamerica, and was cultivated by Native Americans to make tequila, food, and fibers for ropes and clothing.

Like barley and corn, sorghum is a cereal grain, which means that it is a type of grass. Sorghum plants were originally cultivated thousands of years ago in sub-Saharan Africa, in present-day Sudan. The United States was the leading producer of sorghum in the world in 2021 and 2022, followed by Nigeria, Ethiopia, Sudan, Mexico, India, Argentina, China, Brazil and Burkina Faso.

Coconut nectar is made of the sap of the blossoms of the coconut tree. When this nectar is granulated, it is called coconut sugar.

One way to help save bees is to consume less honey or none at all. To learn more about bees and how to support the biodiversity of bees, check out this article and the Xerces Society’s Pollinator Conservation Program. The Open Sanctuary Project also has tips on how to foster bee-friendly sanctuaries.