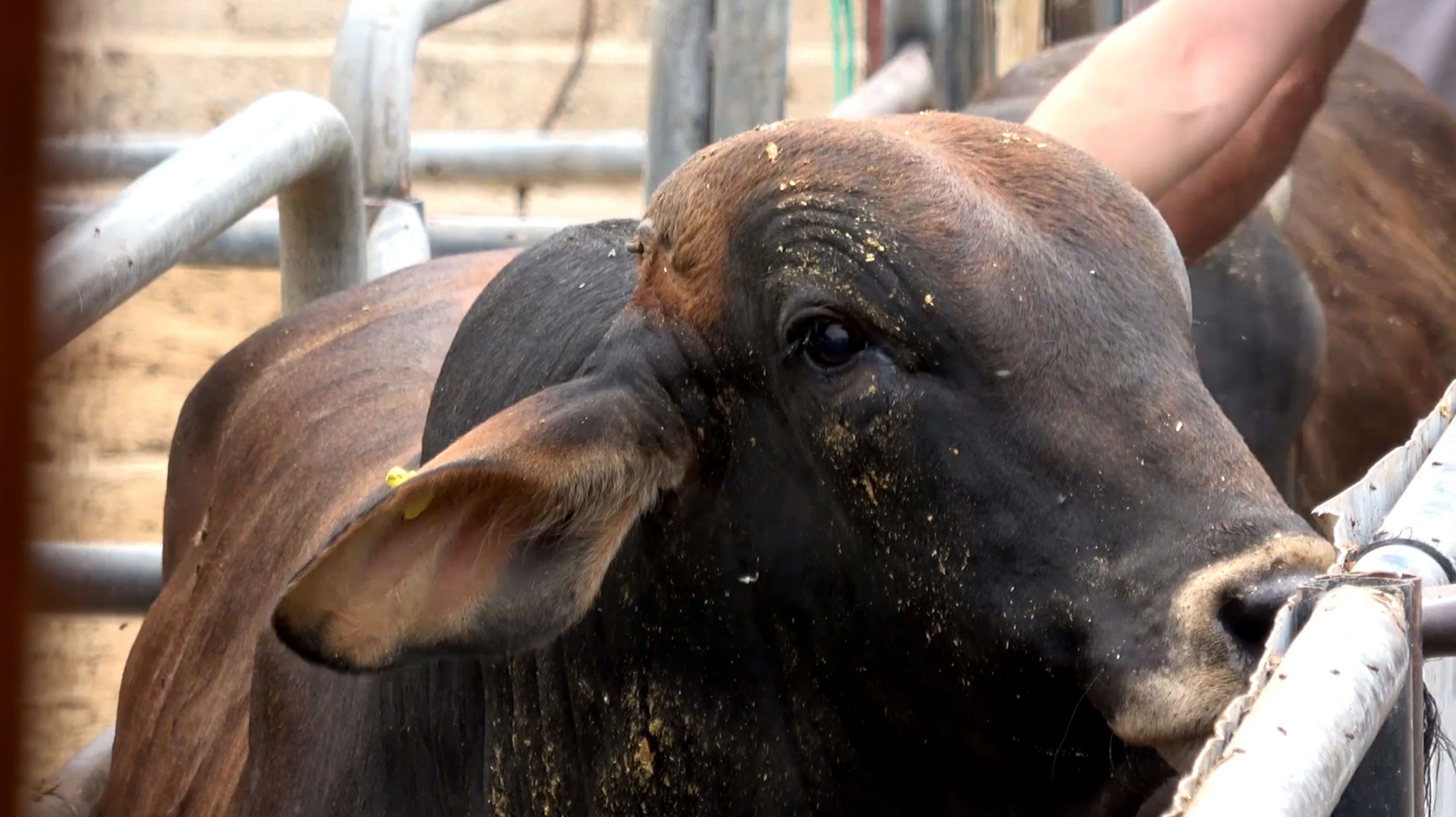 In September 2018, investigators from Animals Australia (AA) went undercover in Middle Eastern slaughterhouses to document the treatment of animals as part of an ongoing global investigation. What they discovered was the severe mistreatment and gruesome conditions of live animals exported to countries in the Middle East, the main destination of Brazilian animals. The video footage obtained by undercover investigators shows the disturbing treatment they received upon arrival at their destination. Many animals were wearing ear tags from two major Brazilian companies, sparking their interest to dig into the export/import relationship between Brazil and the countries involved in their investigation in the Middle East.

The journey from Brazil to the Middle East is long and arduous. In addition to the stress of the unfamiliar environment, noise, high temperatures, and constant motion of the ship, animals are forced to suffer weeks of crowded conditions, lying in their own excrement. Animals arrive after a near three-week journey distraught, weakened, and exhausted.

In the video recorded by the investigators, some of the cows originally raised on Brazilian pastures are seen hanging by ropes as they’re forcefully hauled from the vessel after a long trip across the ocean. They hang high above the port, dangling in terror as they’re lowered to the trucks that will take them to slaughter. Yet the horror doesn’t stop here.

At the slaughterhouse, men are seen slashing at the tendons of cows’ legs to make them easier to control. The cows bleed profusely, trying their hardest to escape the excruciating pain they endure, just moments after being pulled from the cramped containers. Another scene shows the men throwing severed legs at a live cow. They then go on to repeatedly stab at the cow’s neck, a tortured look on her face as she bleeds out. The cow is fully conscious and aware of her surroundings. The video clearly shows the fear in her eyes as she slowly dies in a concrete room running red with blood.

In one of the more gruesome scenes, a man is forcefully pulling at a rope tied around a cow’s face. She pulls away in agony, fighting for her freedom and her life. A gaping hole in her neck reveals tendons and muscle, an open flap with blood pouring out. The cow is alive and fighting to survive, exerting what little energy she has left before taking her last breath.

What turns this from a tragedy into an emergency is that these aren’t isolated incidents. This is normal behavior in the slaughterhouses. According to the AA investigators, cows are routinely and repeatedly stabbed in the eyes, ears, heads, and bodies. Their tails are twisted and broken by workers. The animals are beaten, punched, kicked, stabbed, and tormented to no end. The men show no sign of remorse.

The treatment of these Brazilian animals would not only be illegal in Brazil, but it would also be socially, culturally, and morally reprehensible and unacceptable. The footage obtained by undercover investigators is in conflict with this country-wide expectation. And while most people in Brazil would be shocked and ashamed to see this happening to live animals, the people responsible for sending these animals into the very situation decided to stay silent.

Executives from the two companies in question, Minerva Foods and Mercurio, did not respond to the inquiries made by Animals Australia in relation to the footage. Even though the evidence documented by AA investigators in the Middle East was presented, revealing the systemic and brutal treatment of Brazilian animals described above, both companies have thus far preferred not to engage with them.

Minerva Foods is the second-largest meat exporter and the largest live cattle exporter in Brazil. Their revenue in 2018 was R$ 17.2 billion, a 33% increase from 2017. According to Minerva’s website, the company prides itself on being the “most trustworthy Brazilian company” when it comes to live animal export. Minerva also states that it “rigorously complies” to environmental laws and holds itself to the highest of standards when it comes to the “well-being of the animals.” And when fined in 2018 by the government of Santos in São Paulo for the mistreatment of live animals, Minerva commented that “they follow all of the procedures to preserve the well-being of animals while being transported and loaded into ships until they reach their destination.”

But just days after the fine, following the pressure from animal rights campaigners, Judge Djalma Moreira Gomes signed an injunction banning all live animal export from Brazilian ports. The injunction would be lifted when the destination countries agreed to implement slaughterhouse practices that minimize the suffering faced by animals, at the very least matching the standards in Brazil. Along with the injunction, it was required that a Minerva ship holding 27,000 live cows in the Santos port be emptied and that the cows be taken back to their farms.

Two days later, on February 4th, former President Michel Temer and the former Minister of Agriculture, Livestock, and Supply, Blairo Maggi, met to discuss the injunction. The Attorney General’s Office appealed the injunction and the ship in question was cleared to leave the port of Santos the following day to start its multi-week journey across the Atlantic Ocean. On February 21st, the ship arrived at its destination where all of the animals on board were slaughtered after yet another journey of unimaginable suffering.

Minerva Foods is used to the spotlight when it comes to misconduct with animals and the environment. Fines are paid and then it’s back to business as usual.

However, if the executives in charge who refuse to discuss the investigation truly cared about the well-being of animals, they would be horrified to discover what happens to the cows upon their arrival in the Middle East. The company’s response to being fined 1,469,000 Brazilian reais by the Santos government and its refusal to talk to Animals Australia shows that what happens once these animals reach their destination – or even on the way – is not a cause for concern. To them, the sale of their commodity has been completed, regardless of the suffering the cows have to endure.

People in Brazil care about the treatment and welfare of animals. Brazilians were outraged last year when a security guard at a Carrefour supermarket beat a stray dog to death. The dog’s crime was simply walking into the store. People took to the streets and social media to express their disgust. Five months later, Carrefour was obligated to pay a fine of one million reais to the municipality of Osasco in São Paulo. Half of that money was earmarked to be used to castrate stray dogs and cats. R$ 350.000,00 was used to purchase medication to supply the city’s animal hospital. The remaining R$ 150.000,00 was designated to buy dog food for small non-profit organizations and animal shelters in Osasco.

That kind of outrage seems to be exclusively reserved for the mistreatment and abuse of certain animals, though. According to the Instituto Brasileiro de Geografia e Estatística (IBGE), one cow, one pig, and 189 chickens are killed every single second in Brazil. However, there is little to no outrage about these killings. In fact, consumers are paying for those animals to be killed, a far cry from the public outrage displayed over the killing of one dog.

Brazilian law is very clear on where it stands with respect to the abuse of animals. Laws about animal welfare protection measures have been in the books since 1924 when the federal government enacted Decree 16,590/1924, prohibiting the “carrying out of any behavior or recreation that causes suffering to animals”, a decree that was later revoked. Decree 24,645/1934 establishes protection against the cruelty and ill-treatment of animals but was revoked in 2001 during the Collor presidency because it was enacted during the Getúlio Vargas government when the Executive had legislative powers. To this day, there is controversy surrounding the revocation of this decree. But what is clear, even with uncertainties and inconsistencies regarding older decrees is that a law from 1998 provides a full list of what cruelty against animals consists of. Article 32 of the Law 9,605 (Environmental Crimes Act), criminalizes as an offense engaging in acts of abuse or mistreatment, or injuring or mutilating wild, domestic, or domesticated animals, native or exotic.

So, if animal abuse is a crime in Brazil, why do so many people look the other way when these crimes are committed against animals that become their food? Why are people only saddened or enraged when it happens to animals that remind them of their pets? Cows have the same capacity to fear and suffer as a cat or dog. People should be appalled that animals born and raised on Brazilian farms are being shipped to the Middle East where they will face unspeakable cruelty in acts that would not only be deplorable but indeed criminal in Brazil.

It is likely that if more people knew these animals were being shipped by boat for almost three weeks to the Middle East in horrific conditions, the practice of live animal export would cease to exist.

In fact, this is already happening. There is a bill in the Senate that could do just that. The Projeto de Lei 357/2018 would prohibit the export of live animals to be slaughtered abroad. If passed, this law would ensure Brazilian animals avoid spending weeks at sea in cramped and filthy conditions before facing unusually cruel treatment and agony before slaughter.

Now, more than ever, this law needs to be passed so this barbaric treatment of Brazilian animals can come to an end. According to Ricardo Pereira Barbosa, President of the Associação Brasileira dos Exportadores de Animais Vivos (Brazilian Association for the Exportation of Live Animals: Abreav), the number of live animals being exported from Brazil is going up every year. In 2018, Brazil was the third-largest exporter of live animals in the world and second, only behind Australia, of live export by sea. The same year, 850,000 heads of cattle were exported by Brazil (90% going to the Middle East), up over 50% from the previous year (20% more than predicted by Mr. Barbosa when projecting 2018’s numbers earlier in the year).

“From the day these animals are loaded onto full, filthy cargo ships to the day they are brutally slaughtered, the lives of these animals are full of misery and suffering,” said Sandra Lopes, Managing Director of Mercy For Animals in Brazil. “As a civilized society, we must ban this preposterous practice of live animal export, a complete disaster both for the animals and the environment.” Mercy For Animals has launched an online petition urging people to take action to end the practice of live animal export in Brazil.

It’s time that people stand up for the well-being and humane treatment of all animals, including cows. The public’s indignation after the earlier story about the street dog being killed in a grocery store was inspiring. Seeing so many people come together to speak for animals whose voices cannot be heard shows just how much Brazilians care about animals. The nation should channel that energy and demand that the law passes so that hundreds of thousands of living animals each year will avoid the suffering they face not only on the long trip overseas but the alarming brutality they face upon arriving in the countries where they’ll be slaughtered.

Sign the petition to ban live animal export in Brazil.

Farmed Animal Transport: The Cruelest Leg Along the Road to Slaughter