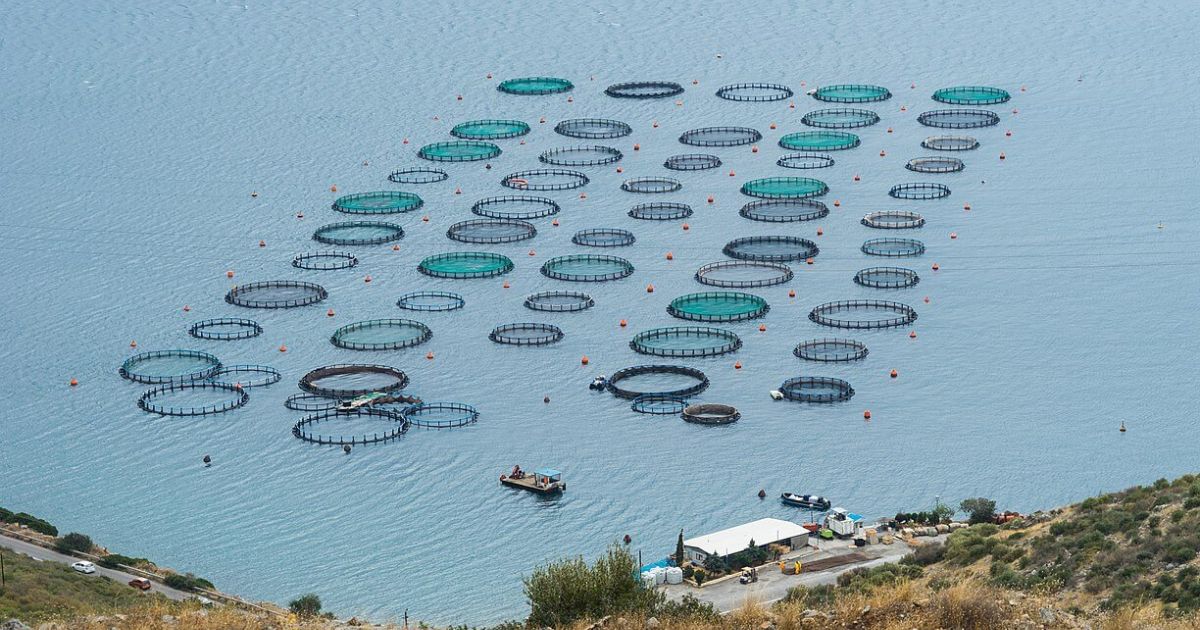 The collapse of the cod industry off the coast of Newfoundland, Canada in 1992 was a dramatic example of overfishing. One way the modern seafood industry has maintained its supply, even in the face of wild fishery collapse, is by scaling up its farmed fish operations. In fact, since the mid-20th century the modern seafood industry has increasingly turned to fish farming as a way to meet increasing global demand for fish and other sea creatures.

Mariculture is the farming of fish, plants and other animals in salt water for human consumption. It is sometimes referred to as marine fish farming when contrasted with other types of fish farming or fisheries, with fish like sea bream and sea bass as examples of products cultivated through mariculture.

Mariculture producers direct the entire lifecycle of fish and sea creatures, including mollusks and salmon, ultimately selling to fish processors and markets. Mariculture operators also cultivate seaweed, such as sea kelp and laver or nori.

What Is the Difference Between Mariculture and Aquaculture?

Aquaculture is a synonym for the practice of fish farming. It is also an umbrella term that also includes the farming of aquatic plants and other creatures that live in water.

The difference between mariculture and aquaculture is that mariculture is a subset of aquaculture. Sometimes mariculture operations are located in brackish waters, or waters that are a mixture of fresh and ocean water. But for the most part, mariculture is defined by growing plants, algae and animals in salt water.

What Are the Types of Aquaculture?

Modern, intensive, marine aquaculture, or mariculture, is dominated by the cultivation of aquatic plants, bivalves, mollusks, fish and shrimp. According to a United Nations-affiliated ad hoc group of technical experts who reported on the topic of sustainable mariculture in 2004, there are a few basic strategies that are used to farm a wide variety of marine organisms.

Clams, oysters, scallops and mussels are popular sea animals to farm in regions with temperate climates. First, larvae are either collected from natural environments or they are artificially fertilized in hatcheries. Usually, parents are captured and taken to spawn their children in captivity.

Then, the larvae are taken to a different location to grow. They can grow suspended on strings, trays, stacks or mesh bags that hang from long lines floating in the water — this is referred to as hanging culture. Another method of growing mollusks is vertical or rack culture, where mollusks grow directly on sticks staked into the ground or on racks upheld by those posts. There is also bottom culture, in which clams, for example, grow on shells, rocks or cement slabs on the sea floor. In land-based systems, mollusks such as abalone are grown in tanks.

Shrimp are mostly grown in tropical regions. First, the babies are grown in hatcheries. Young shrimp are then taken to grow in ponds, concrete raceways and tanks. Shrimp ponds used to be located in rice fields and mangrove forests in many countries. The subsequent destruction of mangrove areas has encouraged farmers to use inland ponds filled with transported seawater instead.

Most marine aquatic plants are grown in temperate climates. The plants used for breeding are originally sourced from the natural environment but are often selectively bred. Most farmed plants tend to be grown in hatcheries. Once they reach a certain life stage, the plants are transferred to grow sites.

Like mollusks, the young plants are grown attached to suspended lines or floating rafts, in bottom cultures anchored to the sea floor and in inland tanks.

Finfish are the types of sea creatures that you would normally think of as fish that look like Dory or Nemo from “Finding Nemo.” Their defining feature is that they have fins. The term is used to distinguish these fish from other sea animals who are often lumped into the same category for the purposes of fishing laws and convenient common language, but who are categorized differently by scientists. For example, cuttlefish, starfish and crayfish are not finfish. They are mollusks, echinoderms and crustaceans, respectively.

Finfish are farmed in both temperate and tropical regions. The types of fish that are raised in mariculture include those who migrate between the ocean and freshwater, also known as diadromous fish, such as salmon.

Farmed finfish are first born in hatcheries, though sometimes young fish are taken from open waters. After the fertilized eggs are hatched, they are put in tanks and eventually transferred to growout sites.

Fish can also be grown in ponds that feature canals and dikes to help supply and drain water from pond compartments. Recirculating systems are highly controlled for water treatment, including temperature as well as physical and chemical properties.

Finfish are also subject to methods of growing called enhancement and ranching. In the former, the fish are released at a young age to help restock free-living populations. In the latter, the fish are captured in otherwise open waters that are artificially enclosed. Sea ranching is a method of mariculture that is used to grow mollusks, crustaceans, marine plants and other marine organisms.

What Organisms Are Raised Using Mariculture?

Organisms grouped under the category of mollusks by the FAO include abalone, winkles, conches, clams, oysters, scallops, mussels and cockles. Squid, cuttlefish, and octopuses are also considered mollusks.

Salmon are an example of fish that swim in both freshwater and seawater and are raised using mariculture. Other such diadromous fish include sturgeon, river eels, and shad, among others.

Aquatic plants raised in salt water include varieties of seaweeds — brown, red and green — among other plant organisms.

What Are Mariculture’s Environmental Effects?

When sea animals are farmed in open waters, such as when finfish are raised in cages closer to the shore, the quality of surrounding waters can be degraded. Uneaten food and fish feces that are discharged from the cage flow directly into the ocean and can cause phytoplankton to bloom, ultimately leading to a reduction in oxygen levels. Algal blooms can also harm the habitat of finfish and invertebrate marine animals living on the seafloor. Antibiotics and other chemicals intended to treat the farmed fish and to combat algal growth can also lower the quality of the surrounding waters.

A major environmental risk of raising finfish in natural waters, especially deep waters, is the potential for fish to escape. Farmed fish are typically not native, and if they escape their cages, they can have a detrimental impact on the ecosystem, by taking food and habitat from wild fish and other creatures.

Escaped farmed fish can also breed with indigenous fish, potentially breeding fish that are less likely to be able to survive as long in their natural surroundings.

Growing fish and other sea organisms in tightly packed spaces can increases the risk of disease outbreaks in mariculture operations. Parasites such as sea lice spread quickly among captive fish in net pens and cages. Salmon, oyster and shrimp farms can also contribute to the transfer of parasites and diseases that have killed wild salmon, oysters and shrimp around the world.

Fish farms can result in damage to habitats. The creation of shrimp farms has harmed the ecology of many mangrove forests. Collecting seeds from the bottom of lagoons can alter or destroy those habitats. The amount of space that mariculture takes up is large and can change the migration and feeding patterns of indigenous sea organisms, including those of free-living salmon and killer whales.

Industrial-sized boats such as fishing trawlers and purse seiners have decimated the local fish called bonga that were once abundant off the coast of the Gambia, as documented by Ian Urbina in a 2021 report in the New Yorker, and in Senegal. Now that bonga are used to create fishmeal for fish farms, they are too expensive for many Gambians, who rely heavily on fish as a source of protein.

To deter underwater predators such as seals, sharks and dolphins from trying to catch the fish inside nets and cages in open waters, the mariculture industry will use gunshots and other intensive sounds that can cause pain, alarm and distress in nearby organisms. These loud noises have been shown to disturb organisms in the local environment and threaten animal survival.

Learning about mariculture is a step toward better understanding the impact of the aquaculture sector on life in ocean and coastal communities. The Sentient Media Take Action resource list features a section on marine animals: marine life and ocean ecosystems.