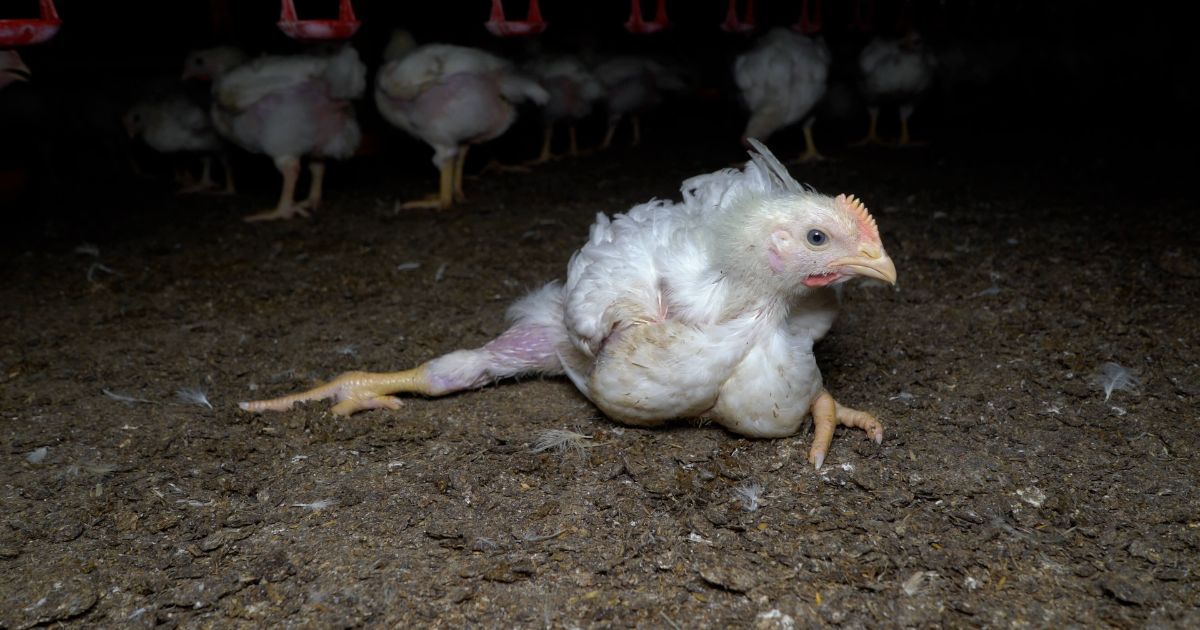 Calls to ban fast-growing chicken breeds have redoubled following an undercover video investigation into a German chicken supplier for Lidl, the discount supermarket that now has about 170 stores in the U.S.

The undercover video was filmed over several months by Spanish animal rights group Equalia and released this week in partnership with The Humane League.

The video appears to show chicks struggling to stand up, dead and dying chicks and chickens, chickens pecking or eating other dead chickens, workers collecting dead chickens and a person urinating in the chicken shed.

According to the European Chicken Commitment (ECC), fast-growing chickens mature so quickly “that their skeleton and internal organs are placed under a huge amount of stress [and they] have such large chest muscles that many of them can no longer keep their balance.” The ECC was developed by European welfare organizations, led by the Albert Schweitzer Foundation and expanded to include US animal welfare groups.

A statement from Equalia said “[f]ast-growing ‘Frankenchickens’ […] grow from birth to slaughter weight in around 35 days,” and can suffer from “heart attacks, lameness, green muscle disease, ascites (water belly) and organ failure.” These problems, the group said, are “exacerbated by the very high stocking density [as seen in the video] which makes it harder for farmers to spot dead and dying birds.”

“Only a ban on fast growing chicken breeds will lead to a significant improvement in broiler welfare,” says Laura Dixon who watched the video. Dixon is a poultry welfare specialist and programme director of the MSc International Animal Welfare, Ethics and Law programme at Scotland’s Rural College in the UK.

The policy “doesn’t necessarily have to be a government ban,” she says, but could be like the Dutch supermarket limit on fast growing chicken sales, which is “driving the production market to slower growing” breeds.

Dixon urges Lidl to switch to slower growing alternatives and ensure its suppliers“ include environmental enrichment items, like bales of straw or platforms and ramps, to encourage movement and increase bone strength,” and put fewer chickens in each barn to allow more living space.

The improvements, says Dixon, would make the chicken “more costly to produce and therefore more costly to purchase … [but] there comes a point where the suffering of broiler chickens is hard to justify as a cost saving measure.”

Responding to the video, a Lidl US spokesperson said Lidl Germany was in contact with the supplier and had arranged “an independent review by external experts.” Further action would be taken, the spokesperson said, based on the review results.

The supplier in the video does not supply Lidl US, the spokesperson said, adding that Lidl US “offers Certified Humane fresh chicken options” and “has set a goal that at least 20 percent” of its chicken meat will meet “European Chicken Commitment standards by 2026.”

The Lidl US statement did not answer questions about whether it would switch to slower growth chickens, but the European Chicken Commitment, also known as the Better Chicken Commitment, does prohibit the “torture breeding” of faster growing chickens.

Companies signed up to the chicken welfare initiative include Nestlé, Unilever, Ikea, Kentucky Fried Chicken and Aldi, a direct supermarket rival to Lidl.

Asked if these corporate commitments are helping chickens, Dixon says yes, but to improve the lives of more chickens, greater numbers of supermarkets, restaurants and other food businesses should sign on to the voluntary code.

In its 2021 report a nonprofit watchdog group found gaps between corporate pledges  and corporate action. The report said that despite “a significant proportion of companies [publishing] formal improvement objectives for farm animal welfare,” significant work is needed to translate their “commitments into real, measurable welfare improvements for animals.”

To make companies more accountable, the watchdog group recommends they designate an officer solely responsible for animal welfare policies and their implementation.

Another roadblock is cost, says Cordelia Britton, The Humane League UK’s head of programs. Keeping slower growing breeds, for example, “means feeding and housing the animals for longer, as well as providing them with more space.”

“Our current laws, culture, and farming practices” make it very profitable to “breed chickens into genetic monsters and cram them into factories,” she says, rather than “treat them as sentient beings, worthy of respect.” To turn the welfare tide, Britton says, supermarkets could make higher-welfare animal products more affordable.

Other factors, including the perception that chicken is healthier and cheaper, have helped boost the meat’s  popularity with consumers. Data cited by The Economist in 2019 from the Organization for Economic Cooperation and Development showed that since 1990, consumption of chicken per person has risen by 70 percent in rich countries.

On the consumer end, Britton says “we all have to start eating less chicken. There are extremely cheap sources of plant protein that we must shift to like lentils and beans. These products are far better for the environment and are not created off the backs of millions of suffering creatures.”