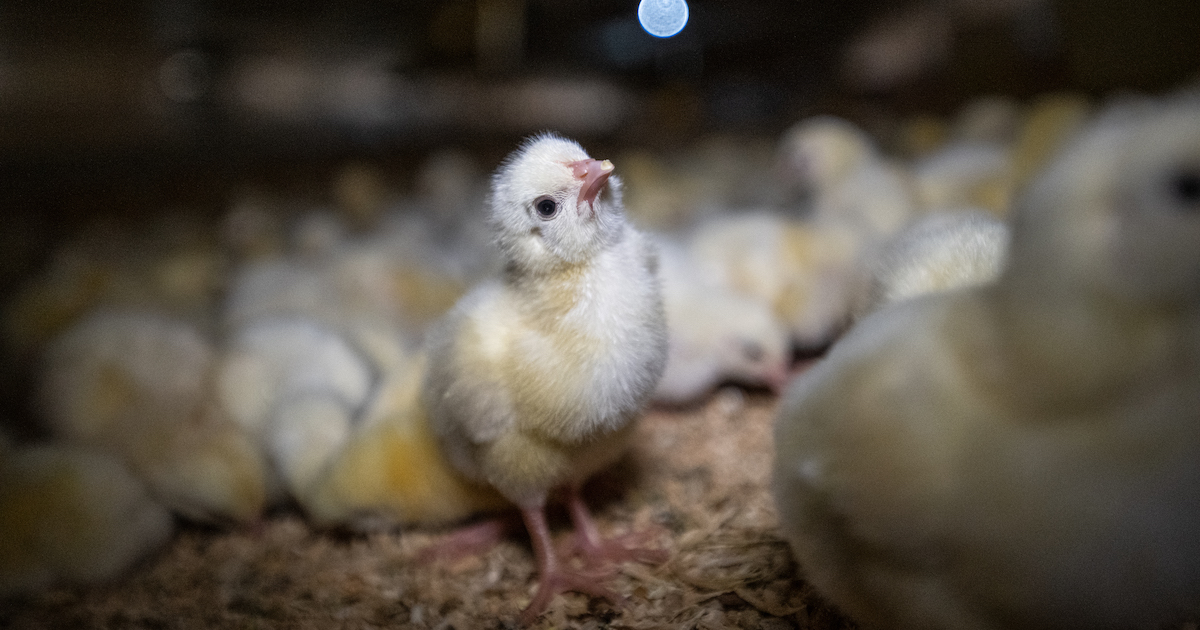 Today, a factory-farmed chicken, or “broiler chicken,” is typically slaughtered for meat at somewhere around 45 days old. It wasn’t always that way.

According to the National Chicken Council (NCC), in 1925 it took a broiler chicken an average of 112 days to reach a market weight of 2.5 pounds. As of 2019, the market weight has soared to 6.32 pounds—and a chicken reaches market weight much faster, usually around 47 days, or about the same amount of time it takes to grow a bunch of kale.

Young chickens now grow so large, so quickly that undercover investigations consistently find birds barely able to move or stand. Some birds are so crippled by the additional weight that they are unable even to survive long enough to be slaughtered. Many birds will not live to see their two-month birthday.

It is now even possible for a chicken to outgrow industrial farms and slaughterhouses.

How exactly did we get here? It is the story of an industry that went from mostly backyard farms to factories filled with tens of thousands of birds, and a government that pushed farms to breed bigger, meatier chickens.

Like much of U.S. animal agriculture, the chicken industry can be traced back to roots that look nothing like today’s factory farms. Much of poultry production consisted of “backyard” farms, and that the chickens were raised largely to supply eggs, though families consumed “an occasional chicken for Sunday or holiday dinner,” according to the NCC. The 1920s and ‘30s brought the broiler chicken, raised for meat and not for eggs.

In 1923, Cecile Steele, credited by the Council as “the pioneer of the commercial broiler industry,” intended to purchase 50 chicks to continue producing eggs, but she was instead sent 500 chicks. She seized the opportunity.

Steele raised the flock of 500 in a 16×16 shed for 18 weeks before selling the meat for 62 cents per pound, according to the Cape Gazette which points out that almost 100 years after this “mistake” launched Delmarva’s now-massive poultry industry, today “chickens are grown in less than half that time and gain more than three times that weight.”

Fast forward to April 2020, when two million chickens were to be culled during the COVID-19 pandemic. Agriculture group Delmarva Poultry Industry said, “If no action were taken, the birds would outgrow the capacity of the chicken house to hold them.”

Steele’s operation would go on to raise over 10,000 chickens year-to-year, but her farm still appears tiny compared to the poultry industry titans that now call Delmarva home—including the number one chicken producer in the U.S., Tyson Foods, and Mountaire Farms.

Mountaire later purchased Townsend Inc. Farms, which according to the Gazette, had become “the first fully-integrated poultry company.” This means that Mountaire controlled everything from the food grown for the chickens through to hatching, raising, slaughtering, and processing, like poultry giants such as Perdue does today.

All told, the U.S. chicken industry now slaughters more than nine billion birds every year. It is the largest broiler industry in the world—as well as the world’s second-largest broiler exporter behind Brazil. According to the NCC, 16 percent of its production is exported out of the country.

The Chicken of Tomorrow

For years, U.S. consumption of chicken has grown steadily, beginning to rise in the 1940s and surpassing pork in 1996 as the nation’s second most consumed meat, according to the US Dept. of Agriculture (USDA). By 2012, it had pushed beef out of the top spot.

In 1952, “specially bred meat chickens (“broilers”) surpassed farm chickens as the number one source of chicken meat in the United States,” according to the NCC. But the effort to create a bird that would grow larger and produce more meat, on a large scale, was not initially led by the poultry industry. It was led by the USDA.

In 1948, the USDA announced winners of its “Chicken of Tomorrow” competition, which featured more than 40 breeders in a race to create a meatier and stronger bird, National Geographic reports. Though most farmers were hesitant at first to cross multiple breeds of chicken, California farmer Charles Vantress was not. His winning bird was a cross between a New Hampshire, the most popular broiler bird on the East Coast, and a Cornish chicken, creating a red-feathered hybrid.

Three years later, another one of Vantress’ crossbreeds won the second “Chicken of Tomorrow” competition. From that year on, “Vantress hybrids served as the sires of 60 percent of broilers across the country,” writes National Geographic.

The shift to new breeds also concentrated power in the hands of a few companies, as National Geographic points out. “The intricacy of the family trees they constructed ensured that the birds could not be reproduced outside the companies that bred them…Previously, broiler farmers had bought chicks from hatcheries mostly for efficiency, but now they had no option.”

Reading the names and descriptions of today’s broiler and breeder chicken breeds feels a bit like reading the descriptions of car models. Take, for example, the Hubbard Efficiency Plus, a female bird—both broiler and breeder—that Hubbard says “brings together the traits the industry is looking for in a single multi-purpose bird, with performance and economic efficiencies at all levels of production.”

Out of decades of breeding to maximize performance and profit, often called “selective breeding,” comes the massive broiler bird of today. Selective breeding, by definition, is the selection of parents with certain “beneficial” traits to produce offspring that possess those same traits, and eventually—traits that are more desired by breeders. In the case of broiler chickens, the goal is to raise birds who produce more meat at a lower cost.

Big Ag controls everything about the way these “modern” birds come to be. A 2016 article published in Agronomy for Sustainable Development breaks down the process. “At the highest level, the pure-breeding lines are owned and controlled by the breeding companies. These lines are subjected to full-scale selection programs; it is from these lines that all of a company’s broiler products have descended…The great-grandparent stocks, which are produced from the pure-bred lines, are subjected to mass selection for selected traits.”

The report continues, “Specific grandparent lines are cross-bred to produce the parent stock, which are then distributed to specialist traders and integrated producers. The final step of the intensive artificial selection is the cross-breeding of these hybrids (parent stock) to give rise to the production broilers, which are raised for slaughter by production companies.”

An example of one of these breeding companies is Cobb-Vantress, a subsidiary of Tyson Foods. Cobb-Vantress one of the top chicken breeders in the country, alongside Aviagen and Hubbard. Aviagen describes itself  as one of a handful of “multinational enterprises” that “dominate the world market for conventional broiler production.”

Aviagen goes on to describe the breeding process. “These companies work constantly to produce genetic improvements in their breeding stock. They typically use a system of four-way crossing to produce the parents of the birds that are raised as broilers. They select and develop certain strains to use as their male line, with emphasis on growth performance and body conformation, while at the same time developing different female lines, with emphasis on reproductive performance. This cross-breeding system protects each company’s genetic research because the genetics of the original grandparents cannot be reproduced from their offspring.”

On the industry-backed website The Real Truth About Chicken, chicken producers emphasize that broiler birds are not given hormones to boost their growth. And while true (the practice is prohibited by the Food & Drug Administration), the industry conveniently neglects to mention that selective breeding has created a problem: chickens who can essentially outgrow their bodies.

The Real Truth About Chicken states, “If a chicken was too big to walk, it would not be able to access its food and water, and would ultimately die. It would not only be unethical for a farmer to do anything debilitating to his or her chickens, but from a pure business standpoint, it would make zero business and economic sense for a farmer to do anything to a bird that would harm it. The birds are their livelihoods and farmers want to do everything possible to keep them healthy.”

While this makes sense on paper, many undercover investigations by reputable animal protection organizations have painted a very different picture of what life is like for broiler chickens.

Perdue Farms is touted as an industry leader in chicken welfare, but investigations of the farms supplying the poultry giant have recently revealed chicks crippled under the weight of their own rapidly growing bodies. Some birds are unable to survive until slaughter. Weak and injured birds die on the factory farm floor, and others are killed because they are deemed unpalatable or “useless” by the growers. When Kelly Guerin, an investigator with We Animals Media, visited a Perdue supplying farm, she recalls a sign provided by the company that hung on the wall: “Cull Daily.”

For Guerin, the sign is a somber reminder. “I’d be curious to hear somebody look at this and say ‘oh that’s an anomaly,’” she says. “It’s literally printed on the wall, a standard practice, a daily occurrence.”

Breeders counter criticisms from animal protection organizations and investigators with what they view as positive impacts on birds resulting from the breeding that has led to today’s broiler chicken. Cobb-Vantress says that these groups do not mention “the health and welfare advantages,” pointing to what it calls improved veterinary standards and nutrition, among other improvements.

Animal Legal Defense Fund’s Cristina Stella placed the blame on the industry’s very business model. Because farmed animals are selectively bred to grow unnaturally large and fast, she says, they can outgrow facilities and slaughter equipment if they stay at a factory farm longer than intended.

The way Stella frames this underlying issue mirrors Delmarva Poultry Industry’s statement mentioned earlier. Two million birds were killed because they would otherwise “outgrow the capacity of the chicken house.”

It might take a minute to digest what all that means. Farmed chickens can now grow so large, so fast that if they are not slaughtered at around 45-50 days, they could become too big to be housed inside factory farms or killed in the machinery of industrial slaughterhouses.

With 99.9 percent of broiler chickens now living inside factory farms, the days of backyard farms are long gone. This allows Big Ag to raises broiler chickens by the billions, producing birds that have not only outgrown their own bodies but are capable of outgrowing the industry itself.