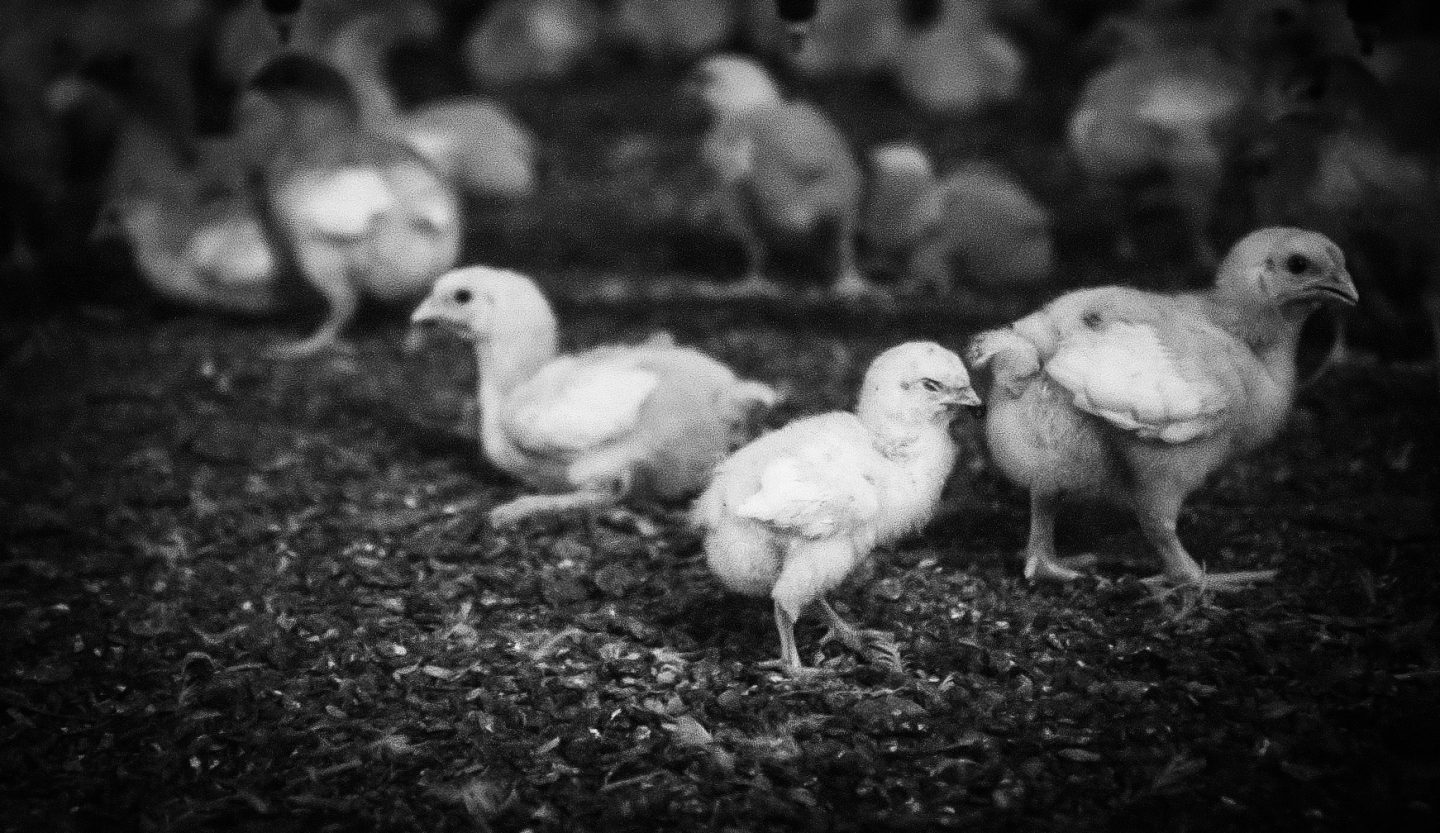 Kelly Guerin walked through a barn on a North Carolina farm, surrounded by thousands of chickens. In some ways, it was a day like many others. As a filmmaker for We Animals Media (WAM), Guerin has traveled to farms and slaughterhouses around the world to document the life and death of the farmed animals confined inside.

Most poultry farms look the same, says Guerin, easily recognized by their long barns with fluorescent lighting and the noise of whirring fans. But this chicken farm is the first she’s gained access to in the United States—where chickens account for 95 percent of the land animals killed for food each year—and, as she puts it, is “the first with a company name I recognized, who sends chickens to very familiar restaurants.”

This time, a farmer invited her in, wanting to talk openly about being caught up in the supply chain of titan, Perdue Farms.

The farm, owned by Rudy Howell, is a supplier that contracts exclusively with Perdue, the country’s fourth-largest poultry producer which slaughters nearly 700 million chickens each year.

“[Perdue] calls themselves a family farm, but they’re a corporate farm. They have control over everything out here,” he said.

Despite depending on Perdue for his farm’s survival, Howell told Guerin he no longer feels his employer is worth protecting with his silence, due to the way he and other farmers have been treated. “More and more it seems we share the common enemy of factory farming,” WAM posted on Facebook.

In March, Howell spoke out, telling the Guardian that he is in debt. The income from each flock he farms varies by as much as $8,000, depending on the general health of the birds he receives from the hatchery. This entire process—from newborn chick to slaughtered animal—is carefully orchestrated by Perdue.

Now, Howell is fighting what he sees as unfairness in this process and has launched a petition with the Food Integrity Campaign. It has been signed by more than 70,000 people asking Congress to protect farmers who speak out about the companies they supply.

He believes farmers who do speak out are penalized, receiving birds who are sicker, smaller, or hatched too late. Some of these chickens are culled.

As the coronavirus pandemic rages on, reports from inside farms revealed the mass culling of animals after operations slowed or halted without enough workers to keep their lines moving. And while farmers are being forced to cull greater numbers of animals, the practice is nothing new. Culling is a daily reality inside factory farms that, before COVID-19, often went unseen.

As Guerin toured Howell’s farm, she was shown how sick and dying young birds are killed. Farmers often use a method called cervical dislocation, in which a chicken’s head is stretched away from the body, as the bird is decapitated by hand. According to Perdue and the rest of the poultry industry, this is considered an acceptable way for farmed chickens to be killed.

In fact, a reminder to cull animals daily was listed on signs provided by Perdue and posted on the doors of the barn during Guerin’s tour.

“It says ‘cull daily,’ with a picture of a chicken, as a reminder. Then it has a sign that says ‘standard culling methods’ for young birds and then for older birds. So, I’d be curious to hear somebody look at this and say ‘oh that’s an anomaly.’ It’s literally printed on the wall, a standard practice, a daily occurrence.”

Perdue is often touted as a leader in chicken welfare. In 2016, the company released an animal welfare policy and one year later signed on to the “Joint Animal Protection Agency Statement on Broiler Chicken Welfare Issues.” This February, Perdue reported having met its goal of 25 percent of its chicken supplier farms meeting “free-range” standards, which still allow crowded barns as long as there is a way for birds to access the outdoors, however limited. One criterium of the agreement is to raise slower-growing chickens, something the company says is in progress as it “tests” raising different breeds and sells meat from slower-growing chickens under its Petaluma Poultry brand.

What Guerin witnessed, and what several investigations have revealed at Perdue suppliers and other factory farms, shows what rapid growth in chickens looks like and why animal protection groups are pushing to end the practice.

Chickens are about 45 days old when slaughtered. Yet, a look inside a factory farm often exhibits birds already crumbling under the burden of selective breeding, in which parents (or broiler breeder chickens) are chosen for genetics that will lead chicks to grow larger and faster than they naturally would. The pace of this crippling growth can cause leg deformities and even heart attacks. Still, while slower growth would decrease suffering, birds would still be bred to suffer and die, while bringing in a significant profit for corporations including Perdue, which reported $7.3 billion in sales in 2019.

Some credit given to Perdue may stem from the fact that other poultry giants have been resistant to making improvements in this area at all. Tyson Foods, the nation’s largest chicken producer, has not yet addressed the issue of rapid growth—nor have its fellow industry leaders Pilgrim’s Pride and Sanderson Farms, which along with Tyson account for 90 percent of the broiler chicken market.

Guerin saw some young chicks who had just arrived from the hatchery and already “could only take a few steps and then plop down. They had their legs splayed out beneath them.” Some tried and were unable to walk away as she got closer. “They would be laying there, breathing heavily, eyes closed,” she says.

Promises, WAM’s short film by Jan Sorgenfrei, reveals more of this condition in the chicken industry, built into the birds’ very genetics. “These animals have been bred to grow so fast that their hearts and legs can hardly keep up with the pressure from their bulking bodies,” says WAM founder Jo-Anne McArthur. “To some, death comes quickly. Others wither slowly away.”

Walking among the birds unable to stand, as Howell demonstrated how they would be culled, Guerin spotted a chicken who caught her eye and asked if she could take this bird and one more home with her. Howell said yes.

“One was like half the size of all the others, and had feces crusted on her face and on her beak. She just stumbled around with her eyes closed and she was too short to reach the standard-height water dispensers,” Guerin says.

She hurried, the birds wrapped in a t-shirt on her passenger seat. One only survived an hour. The other, too weak to lift her head or open her eyes, survived.

Now named Sweet Pea, that little bird will live out her life at Piedmont Farm Animal Refuge in North Carolina. In a video, the sanctuary shared Guerin’s visit with the chick she rescued.

“I’m heartbroken that the second one didn’t survive,” says Guerin. “She was so close to a good life. But the one that we were able to save was able to triple in size and she loves all of the people at her new sanctuary and she’s always on their social media. I think she’ll be a good ambassador for all the ones we have to leave behind.”

Leaving Is the Hardest Part

McArthur said that for her, the hardest part of investigations is leaving—knowing she gets to leave, and the animals can’t. It is a harsh reality that Guerin shares.

“So many die on transport or as they’re being raised…and you get so tempted to stuff one in your pocket and run away. Always, while you’re documenting this, you have to quell the urge to scream and panic and go: ‘What are you doing? Please stop.’”

But Guerin keeps going back.

“You say to yourself that you’re hopefully saving more eventually by not giving yourself away, and by not prioritizing the rescue of the ones in front of you, who are looking right at you—to be able to represent all of the others who hopefully won’t have to be in this position.”