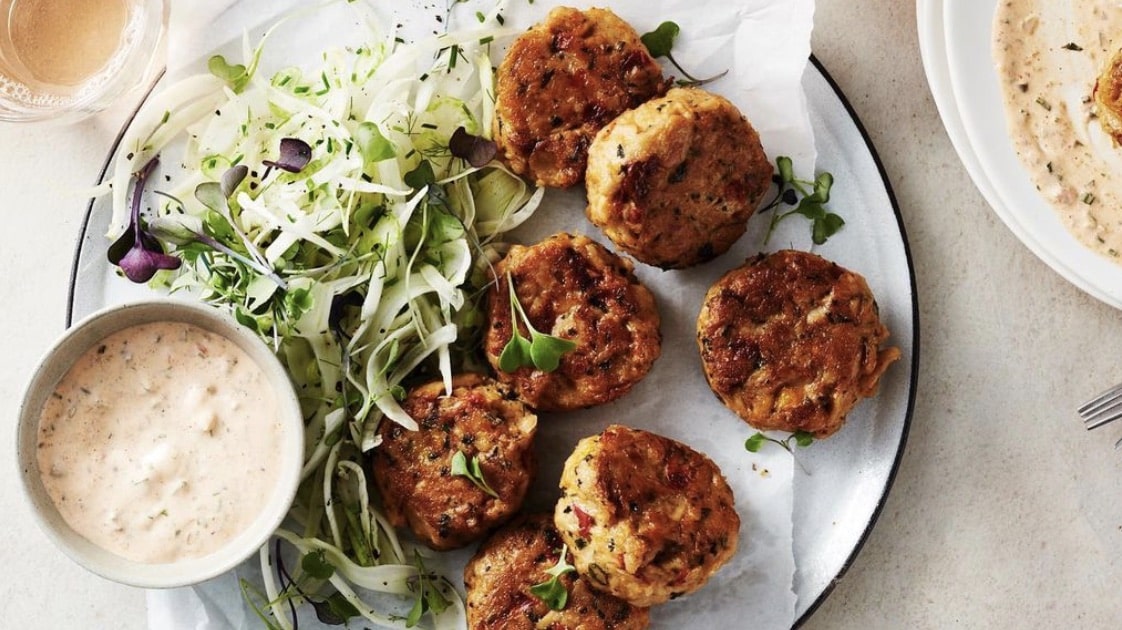 Seafood is typically procured in one of two ways: industrial fishing or fish farming. Neither of these is a sustainable means of food production, as they both entail serious environmental and ethical consequences. Plant-based seafood, an alternative to traditional seafood, has been gaining popularity in recent years and provides a more reliable and sustainable source of food without sacrificing flavor.

Can You Eat Seafood on a Plant-Based Diet?

While those following a vegan, plant-based diet may not be able to eat seafood, read on for a number of much more ethical and equally tasty alternatives, that don’t wreak environmental havoc.

What Is Plant-Based Seafood?

Plant-based seafood is an alternative developed for people who don’t consume ocean- or farm-sourced seafood, whether for ethical reasons or due to allergies. Beyond personal health, there are plenty of reasons why consumers might consider plant-based seafood, and these have led many companies to try and gain a foothold in a burgeoning market.

The industrial fishing that provides so much of the world’s seafood has hugely detrimental effects on the environment. Overfishing is a common occurrence that has pushed many fisheries to breaking point. Another serious problem associated with industrial fishing is bycatch—the capture of unwanted species while fishing. Bycatch can include sharks, mammals, turtles, as well as a variety of other species, many of which are endangered.

Yet the problems of industrial fishing are not solved by aquaculture—or fish farming—which has its own harmful impact on the environment. The mass farming of fish contributes to the pollution of waterways, while pests, such as sea lice, are common amongst farmed fish and can spread from the farm to wild populations. Fish farming also contributes to the demand for industrial fishing. During 2005–2009, almost 15 million tons of wild-caught fish were processed into fish food and fish oil to be used for aquaculture or fed directly to farmed fish. The demand for wild-caught fish to be used as food on fish farms has negative impacts on the countries from which the fish are sourced. It was recently found that the number of wild fish extracted from Western Africa could feed 33 million people. These fish are instead being used to feed farmed fish, putting thousands of people at risk of food insecurity.

Another important reason behind the demand for plant-based seafood is concern for the fish themselves. Fish have been recognized as being capable of pain and suffering, and research suggests they may be capable of self-awareness as well as being able to recognize one another.

What Is Plant-Based Seafood Made of?

When it comes to plant-based seafood, there is an option available for everyone. Some are made from pea protein or a mixture of different plant-derived proteins. Others are made from trehalose, a type of sugar derived from plants, and water. A primary ingredient in many brands of plant-based seafood is seaweed, as it can contribute to the authenticity of the flavor.

Is Plant-Based Seafood Good for You?

As with all types of food, some alternative seafood options are healthier than others. Brands with healthy options include Jinka and Ocean Hugger Foods. When selecting a plant-based seafood option, it is important to take note of the sodium in the product, as some brands can have high levels.

New Wave Foods focuses on the production of a plant-based shrimp alternative that can be used in any dish the same way that shrimp would be. In addition to being plant-based, New Wave shrimp is also kosher, gluten-free, halal, organic, and non-GMO. The company is still in talks with restaurants but is expected to launch in 2021.

Good Catch produces a wide variety of plant-based seafood products, including fish-free tuna, fish sticks, and fish fillets. In addition to being available at grocery stores such as Whole Foods Market and Stop & Shop, Good Catch products can also be ordered at restaurants including Veggiegrill and Bareburger.

Ocean Hugger Foods specializes in plant-based tuna and eel to replace animal-derived ingredients in poke, sushi, maki, and other dishes. The tuna alternative, Ahimi, is made with tomatoes while the eel alternative, Unami, is made with eggplant. Currently, Ahimi is available throughout the United States and Canada. Unami is in the process of being rolled out in the same markets.

Gardein’s selection of plant-based seafood alternatives may be limited to their mini crabless cakes and golden fishless fillets, but the company also provides a number of other vegan meat alternatives including jerky, soups, and meatballs. The brand also offers a variety of gluten-free options and is available nationally within the United States.

All Vegetarian Inc offers shrimp and fish alternatives either as solo purchases or as part of a pack of a variety of plant-based meats. The company’s products are available for purchase in a variety of countries and online from the United States, India, the United Kingdom, and Japan (among others).

BeLeaf is another company that creates a number of meat alternative products. Their seafood offerings include ribbon fish and shrimp. Their products can be purchased at retailers in the United States, via certain online retailers, or ordered for pickup at their headquarters in California.

Jinka offers a line of ready-to-eat plant-based tuna spreads. They offer three flavors: original, spicy, and lemon, and dill. Jinka products contain 14 grams of protein, omega 3 fatty acids, and no cholesterol or trans fat. Their products can be purchased in many regions of the United States, including Hawai’i.

Sophie’s Kitchen specializes in plant-based seafood and offers a wide array of alternatives. Available options include fish fillets, smoked salmon, and Toona in both black pepper and sea salt varieties. Their products can be acquired online through Amazon or at retailers such as Walmart and Sprouts.

Loma Linda’s seafood alternative products include Skallops and six flavors of Tuno. These and the company’s many other meat alternatives can be purchased online through their website and at a number of retailers across the United States.

Cavi-art focuses on offering plant-based caviar. The company offers three varieties: one for broad use, one meant to replace lumpfish and cod roe, and one well-suited as a tobiko or masago replacement. The company is based in Denmark and the products can be purchased in Europe.

Quorn offers fishless sticks as part of their line of plant-based alternatives. Those following a strict vegan diet should be aware that, while their fishless sticks are vegan, this is not the case for all of their offerings. Some of their products, such as their turkey roast, contain dairy or eggs.

Tofuna Fysh is a fish sauce replacement owned by Earthly Gourmet. The sauce is produced in Portland, Oregon, and can be used in any recipe that would normally call for fish sauce—such as pad thai and panang curry.

Seafood Co. operates Mind Blown Plant-Based Seafood which is a line of products including alternatives for coconut shrimp and lobster crab cakes. The company’s products are available across the United States.

Vegan Zeastar is a brand of seafood alternatives that is owned by Vegan Finest Foods. This line of foods offers a variety of flavored plant-based shrimp as well as cod, tuna, and salmon replacements. The brand is available for purchase in the Netherlands, Germany, and Sweden, among other countries.

Ocean’s Halo uses kelp to create a variety of products such as broths and bowls. Also included in their line is nori or seaweed. Their products can be found on Amazon or at grocery stores such as Kroger or Whole Foods Market.

Loving Hut is an expanding, worldwide chain of restaurants that offers a wide array of items on their fully vegan menu. Though each location has a unique menu, some offerings include Crispy Chow Fun with plant-based shrimp in San Francisco, and Ocean Joy & Soup featuring vegan prawns in Ledgewood, New Jersey. In addition to the many locations in the United States, Loving Hut can also be enjoyed in Japan, Togo, Paraguay, and many other countries.

Worthington Meatless specializes in meat replacements, with an especially large line of plant-based deli slices. However, they also offer a meatless tuna roll that can be acquired online.

Where to Buy Plant-Based Seafood

Plant-based seafood options can be purchased in a number of different grocery stores including Wal-Mart, Whole Foods Market, and Sprouts Farmers Market. Though plant-based seafood has not become as mainstream as some other meat alternatives, if there are no options available at your local grocery stores, there remain a wide variety of options available online both in the United States and internationally. Some restaurants such as Loving Hut, Long John Silver’s, and a wide selection of small businesses offer plant-based seafood options on their menus.

The Future Is Bright

In recent years, options for plant-based seafood have increased and alternatives can now be used to replace sushi-grade fish products, caviar, coconut shrimp, and a wide variety of other popular fish and seafood dishes. In addition to the sheer tempting variety of these plant-based seafood options, the products are also more environmentally friendly, sustainable, and do not require the mass slaughter of millions of fish.