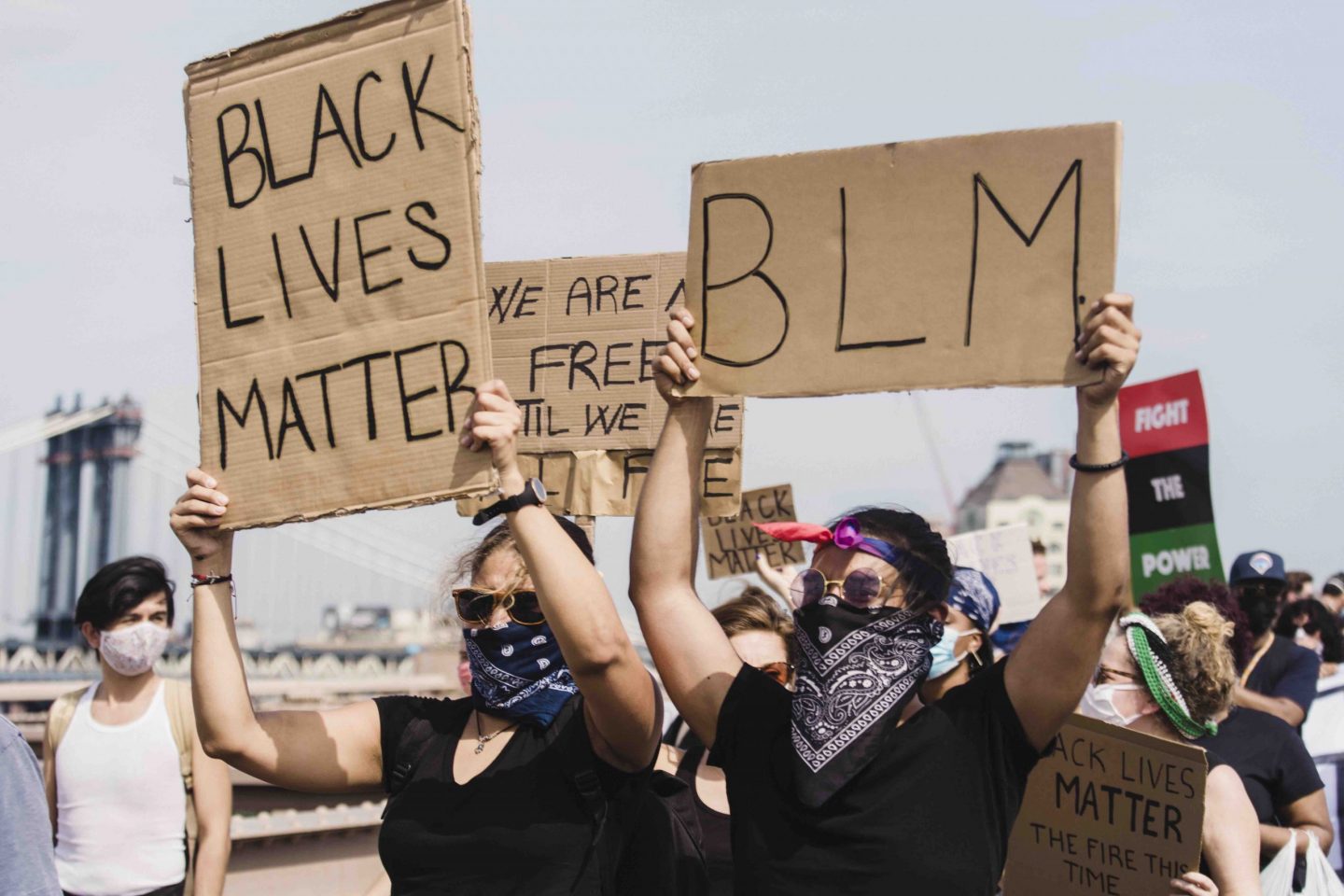 A Black protester, stone-faced, holds up a pig’s head, eyes vacant and stained with blood, making sure Minneapolis police officers get a good, hard look. The pig was presumably hung up for sale by a butcher after years of abuse in a factory farm. The protester belongs to one of the racial demographics that faces the most oppression in the United States, if not the world. The protester and the abused animal, together, provoke a complicated debate.

The protester is one of hundreds of thousands of citizens worldwide who continue to take to the streets to demand an end to police brutality and justice for the recent killings of three Black individuals—George Floyd, Breonna Taylor, and Ahmaud Arbery—at the hands of racist police officers. The pig is one of the millions of a species that is daily mistreated, butchered, and sold by human hands. The juxtaposition of acts of injustice toward humans and injustice toward other animals—racism contrasted with the head of a routinely exploited animal—creates a controversy over which movement deserves to be prioritized. Anonymous for the Voiceless (AV), an animal rights activist group, was horrified by the use of the pig’s head and issued sharp criticisms. “It is beyond absurd that someone in this day and age is protesting against injustice while holding up the body parts of a decapitation victim without others around them so much as blinking an eye,” AV posted on its Instagram. However, as one commenter points out, “Why use this particular photo to point out human hypocrisy when you could use any other example [of animal exploitation] 365 days a year?” While AV does call out cruelty against animals year-round, the reaction from many commenters was that this is a sensitive time and sensitive issue, so AV should prioritize support for the protesters over the harm to the pig. Both movements are fighting serious, ongoing injustices and have valid grievances against human oppressors.

Honing in on one specific instance of animal abuse during an important moment for the Black Lives Matter (BLM) movement can be seen as racist. In an Instagram post, Christopher Sebastian, a Black animal rights educator, says that he disapproves of the use of an animal carcass in protesting injustice, but challenges animal rights activists who condemn the action while staying silent about violence against Black people. “If we recognize that both Black protesters and racist institutions are speciesist…locating your critique on the people already on the receiving end of oppression tells a lot of people that your solidarity is illegitimate,” Sebastian writes. Speciesism and racism often intersect; historically, dogs were used by police to track down enslaved people who had escaped, and horses are currently being used during BLM protests to intimidate crowds. AV has not publicly mentioned either instance of animal exploitation, although doing so would help both the Black Lives Matter movement and the plight of non-human animals. All humans perpetuate speciesism and animal violence, but choosing to emphasize an act of speciesism by an already-oppressed group of humans is inadvertently another form of oppression.

Animal carcasses are often on grisly display by a variety of people and in many different contexts. Cooked, decorated pig carcasses are fixtures on dinner tables worldwide and, for holidays, meant to elicit a sense of festive cheer. Pictures of raw chicken carcasses are posed and posted by Instagram and Reddit users, scoring hundreds of likes with no risk of being flagged for graphic content. Fur and often entire animal skins are featured on fashion industry runways and coveted as luxury accessories. As one Instagram user comments on AV’s controversial post, “The pig head is no different than a steak on someone’s plate.” All humans, even animal activists, vegans, and professed animal lovers, are to some degree complicit in speciesism and the exploitation of animals for human gain; some examples of human hypocrisy are just more public or jarring than others.

Choosing to center other issues during a pivotal time in the racial justice movement is inappropriate at best and racist at worst. In an article titled Stop Comparing Black Lives Matter to Animal Rights, Summer Anne Burton writes, “Other animals matter, but it’s unnatural and unethical to change the subject when Black humans are begging the rest of us to care about their lives.” When someone counters “Black Lives Matter” with “All Lives Matter,” it’s appropriate to use the metaphor of a neighborhood: if someone’s house is on fire, while others are not, whose house is the priority? Similarly, choosing to insist that “All Lives Matter,” including those of non-human animals, is not technically wrong, but still distracts from and diffuses the potential impacts of an important and necessary racial justice movement. Instead of pointing out speciesist actions of protesters, thereby distracting from the urgent objectives of the BLM movement, animal rights activists should apply their abilities to effectively organize and express compassion for the oppressed to supporting a long-victimized group of fellow humans. Animal rights communities can embrace the many ways that the AR movement intersects with the Black Lives Matter movement, while not drawing any attention away from this pivotal moment in the history of Black racial justice. Animal activists have a duty to fully support all who are oppressed, regardless of species.

Allyship between the animal rights community and the Black community is tenuous, but it doesn’t have to be. According to the essay An Analysis of Diversity in Nonhuman Animal Rights Media, the animal rights movement is overwhelmingly white; thin, middle-class, white women, in particular, are often the movement’s most visible representatives. Black vegans and animal rights activists exist; they just are not given enough exposure—perhaps because they are a minority in the AR community or perhaps because of systemic racism. Black individuals and other people of color are increasingly sharing their experiences with racial microaggressions within animal rights communities. Encouragingly, Black people are the demographic with the fastest-growing rates of veganism, in part due to the influence of vegan and plant-based Black artists such as JAY-Z and Beyonce. These celebrities actively support the animal rights movement by offering free concert tickets to fans who go vegan. Animal rights communities, while historically not racially diverse, are increasingly making attempts to be more inclusive, often by using their platforms to spotlight Black people, Indigenous peoples, and people of color within the animal rights movement. Increased diversity among AR activists has the potential to benefit oppressed peoples and animal species alike.

How Racism in Animal Advocacy and Effective Altruism Hinders Our Mission